One of the most remarkable engineering developments has been the rapid advances made in the application of the compression – ignition principle to engines for transport purposes, particularly on road and rail. 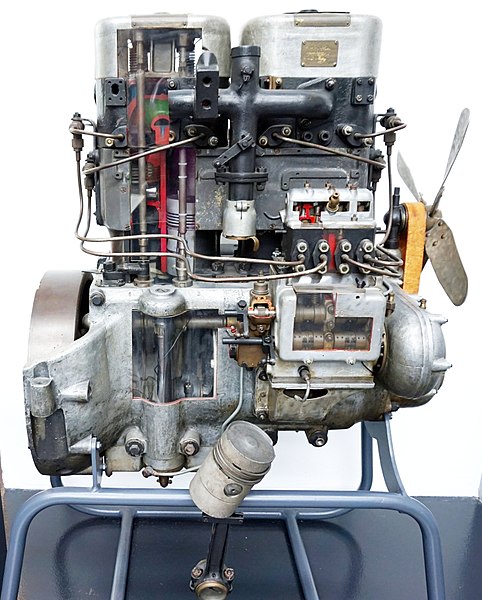 A Combustion - ignition engine from Wikimedia under CCO license

The compression – ignition engines are alternatively described as ‘Diesel’ engines in honour of Dr. Rudolph Diesel, the German engineer who was responsible for most of the pioneer invention and development work.

The essential differences between this type and the normal petrol unit is that no spark is required to initiate combustion. Air alone is compressed to such a degree that its temperature is raised to the point where ignition of the fuel occurs as soon as it is injected. The method of injecting the fuel is by using a pump to inject the fuel into the combustion chamber. This method known as solid injection, is employed on all modern high-speed engines.

In the petrol engine the air and petrol are mixed before they enter the cylinder, whereas in the compression – ignition engine (C.I.E) contact between the fuel particles and air does not take place until injection occurs. Ensuring complete combustion is one of the most difficult problem in the design of C.I. engines. Thus is the chief reason why the Brake Mean Effective Pressure (B.M.E.P) is not at present superior to that of the petrol engine. The B.M.E.P depends on the quantity of oxygen burnt in the combustion chamber, even when other things being equal.

The majority of high-speed compression ignition engines operate on the four-stroke cycle. In this regard, similar names are used to distinguish the strokes as on the spark ignition engines.

The Cycle of Operations; Diesel PV cycle from Wikimedia under CCO license
A cycle is simply a series of events that repeats themselves.

The purpose of the fuel pump is to deliver the correct quantity of fuel at the precise instant required for a wide range of loads and speeds. The system employs a small piston known as a plunger and a cylinder. In this type, there should be one for each cylinder, so that on a six-cylinder engine, there will be six of these elements housed in a compact unit driven from the engine. Its operation is similar to the mechanism of the normal poppet valve. As the plunger rises, its top edge closes both ports, forcing the fuel along the pipe to the cylinder. This continues until the edge of the helical groove uncovers the spill port, and consequently releases the rest of the fuel. The quantity of fuel delivered depends on the position of this helical groove. The movement of the plunger is controlled by a rack which is operated by the accelerator and the governor.

The purpose of the governor is to control the maximum engine speed. This also minimises a smoky exhaust at high speeds. On the later model of pumps both pneumatic and centrifugal control are used. The reason for this is that at low speeds the pneumatic governor is more sensitive, whilst at maximum speed the centrifugal governor comes into operation.

The purpose of the nozzle is to spray the fuel into the combustion chamber. Basically, it consists of a spring – loaded spindle which is set to lift at a predetermined pressure. Nozzles can be of the single hole, pintaux type or the multi-hole type. The type to be fitted to an engine will be determined by the type of combustion chamber employed. In general, a single hole nozzle will give a greater depth of penetration than the pintaux or multi-hole pattern.

COMPARISON OF THE PETROL ENGINE AND THE COMBUSTION IGNITION ENGINE

ADVANTAGES AND LIMITATIONS OF A COMBUSTION – IGNITION ENGINE

steemstem steemng engineering science engine
3년 전 by h-max45
$1.19
16 votes
댓글 남기기 7
Authors get paid when people like you upvote their post.If you enjoyed what you read here, create your account today and start earning FREE STEEM!
STEEMKR.COM IS SPONSORED BY

For a new writer, you've done very well, I wish you dwelled more on atomization of the fuel though. Also, it is generally believed that heavy duty machines employ compression ignition engines, why is that? Keep improving bro.

I would like to add to the comparison on which is better for the environment:
-diesel emits more toxic nitrogen compounds and particulate matter
-it emits lower amounts of carbon monoxide, hydrocarbons and carbon dioxide

Compared to petrol cars, diesel is usually more polluting because catalytic converters to lower CO2 produce even more nitrogen compounds, which are toxic for us. Of course, new systems and frequent maintenance makes a diesel engine similar to a petrol one when it comes to pollution.

😉 Thanks for your contribution.

How effective is this cycle compared to others?
Say in terms of fuel consumption, fuel to power output ration and the likes.

Since the C.I.E efficiency is high, then fuel consumption is low compared to that of S.I.E. That's the reason for the C.I.E being efficient than the petrol engine

This is fabulously written and formatted..It's a nice intro by a new comer...Even though I'm very familiar with the topic discussed, I learnt over. Thanks for this wonderful post!

Do join the steemSTEM discord group to engage with other community members. Welcome!

I wrote on the diesel cycle few days ago.. It is a very important invention to the world as it is being used for several purpose in engineering.