Hello Steemians;
How are you guys doing today?. As for me I'm happy to be back with an interesting topic for you guys.

Most of you guys know one or two things about engines, I wrote a post on Compression Ignition Engines here some weeks ago and now I'm coming down to the basis, which is the classification of engines.

This is a very important and interesting Auto Mechanical Engineering topic, so I implore you guys to take your time to read this article and I promise you're gonna grab something new from this post.

Now to the main business of the day;

As we all know that the engine is the backbone of any machine. Now we have to know how they are being classified.

Engines are classified based on;

But for this particular article, I’m going to dwell into the Cycle Classification which is number 2 on my list.

So sit tight and let’s go on a trip to the engine world. 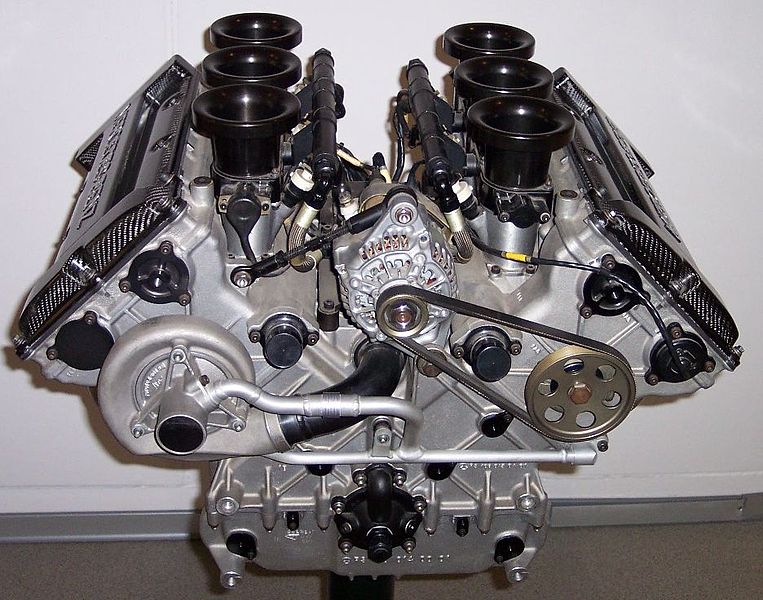 It is now necessary to describe the sequence of operation by which the combustible charge is introduced, ignited and burnt and finally discharged after it has completed its work.

There are two important ‘cycles’ of operation in practical use, namely;

However, the vast majority of automobile engines use the four-stroke cycle engine.

ILLUSTRATION OF A FOUR-STROKE CYCLE from Wikimedia

The Four-Stoke cycle engines are the most basic engines used in most cars and bikes.

The name itself gives us an idea of what we’re dealing with, it is an Internal Combustion Engine (I.C.E) where the piston completes four strokes while turning the crankshaft twice. As mentioned earlier the Four-Stroke cycle engine was first demonstrated by Nikolaus Otto in 1876.

Now let’s discuss the parts that makes up the Four-Stroke cycle engine; 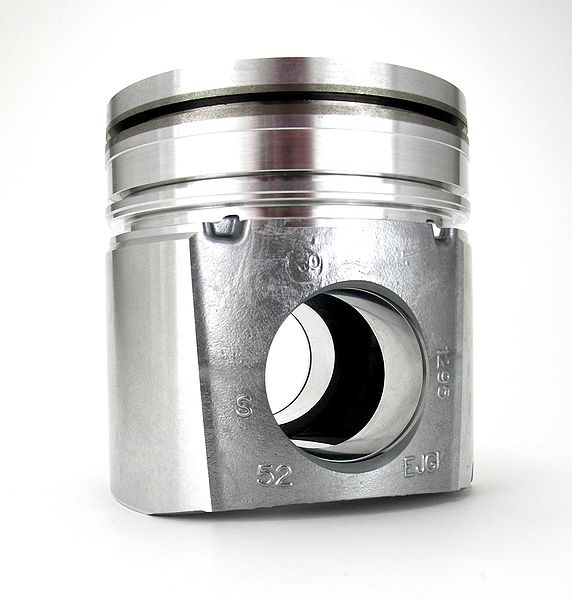 PISTON from Wikimedia under CC2.0 license

It is responsible for the transfer of the expanding force of gases to mechanical rotation of crankshaft through the connecting rod. It is responsible for the conversion of reciprocating motion to rotational motion. 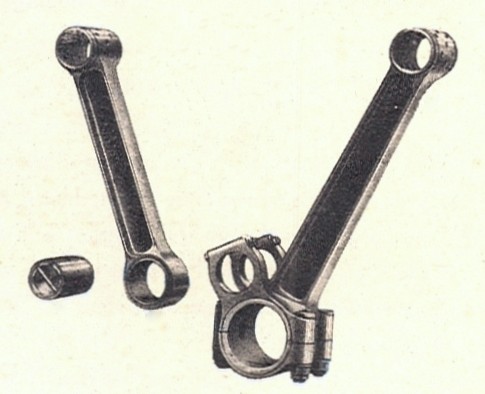 It is responsible for the transfer of motion from a piston to crankshaft which acts as a lever arm. It is a rotating mechanical device for storing energy.

The Inlet and Outlet valves: 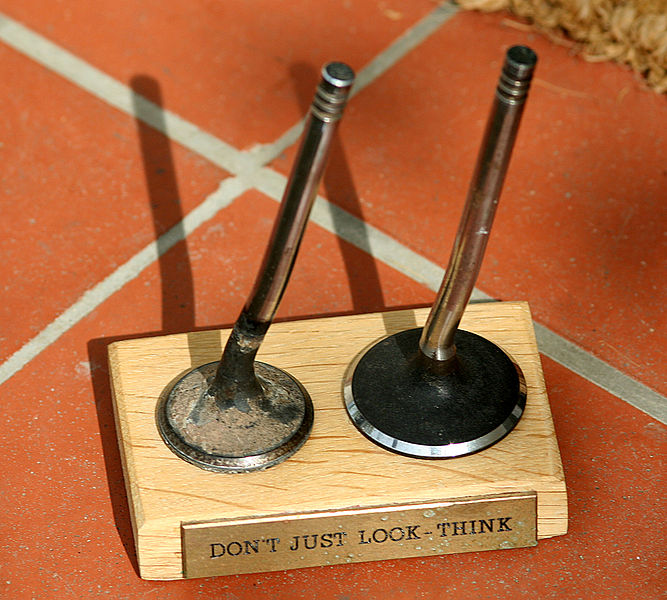 They allow intake of fresh air with fuel and exit of the air-fuel mixture spent from the cylinder. It is responsible for the delivery electric current to the combustion chamber which ignites the air-fuel mixture leading to abrupt expansion of gas.

The four-stroke cycle consists of the four strokes, namely; 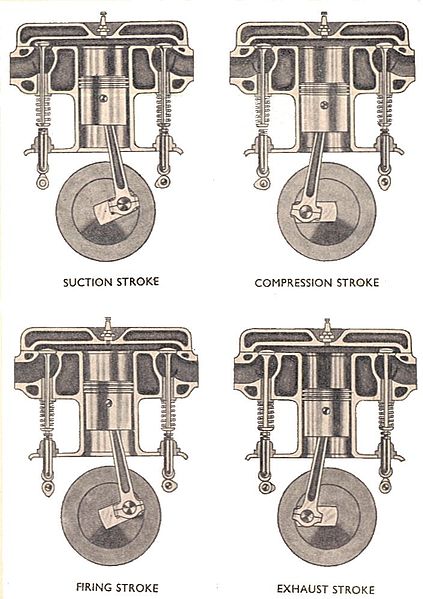 The momentum of the outgoing exhaust gas creates partially a vacuum within the cylinder even before the piston has moved far on the induction stroke. The atmospheric pressure (atm pressure) being greater compared to the depression in the cylinder will cause a flow of vaporised fuel and air from the Carburettor. The inlet valve remains open until some 50° after B.D.C (Bottom Dead Centre) to take advantage of the momentum of incoming mixture which may have a speed of 30 – 90 meters per sec.
To obtain the maximum filling of the cylinder the inlet valve opens about 10° before T.D.C (Top Dead Centre) while the exhaust valve closes some 10° after T.D.C giving 20° of valve overlap.

On the petrol engine the charge is compressed into about one-eight of its original volume, while the pressure rises to about 1034 kpa (kilopascals) depending upon various factors including the compression ratio, throttle opening and engine speed. The two valves are closed.

Near the top of the stroke the mixture is ignited by a spark which bridges the gap at the plug points.
Combustion of the charge results in very high temperatures, which may exceed 2000°C on full throttle. The high temperature produces a rise in pressure of the gas which is followed by a fall in pressure as the piston traverses the power stroke.

In this stroke, the exhaust valve opens some 50° before B.D.C (Bottom Dead Centre) allowing the pressure within the cylinder to fall and so reduce ‘back’ pressure on the piston during the exhaust stroke. The valve will open until about 10° after T.D.C (Top Dead Centre).

And now we move to the Two-Stroke cycle;

The two cycles the Two-Stroke cycle engine goes through are the;

Below is for three-port, Crankcase compression, single-cylinder engine.

The two-stroke engine has no valve, the sides of the piston being employed to open and close ports in the cylinder walls at the correct intervals.

Events above the Piston

During this period, the piston rises compressing the charge in the combustion chamber. Near T.D.C the compressed gas is ignited by a spark bridging the gap at the point. The high temperature produced by the combustion of the charge causes a rise in pressure, followed by expansion as the piston travels down. Near B.D.C there are two ports in the cylinder wall – the transfer port, communicating with the crankcase, and the exhaust port. As the piston nears B.D.C it uncovers first the exhaust port, releasing the burnt gas and then the transfer port, admitting to the cylinder compressed charged from the crankcase.

Events below the Piston

During this period, each upward stroke of the piston creates a partial vacuum in the crankcase, and near T.D.C, the lower edge of the piston skirt uncovers the inlet port, admitting a fresh charge of gas from the carburettor.

As the piston descends, the inlet port is closed and the charge is compressed in the crankcase until the transfer port is exposed, allowing the gas to escape into the cylinder.

It is to be noted that a deflector head piston is used to direct the incoming gas to the top of the cylinder.

The crankcase must be small and gas tight to provide adequate crankcase compression. 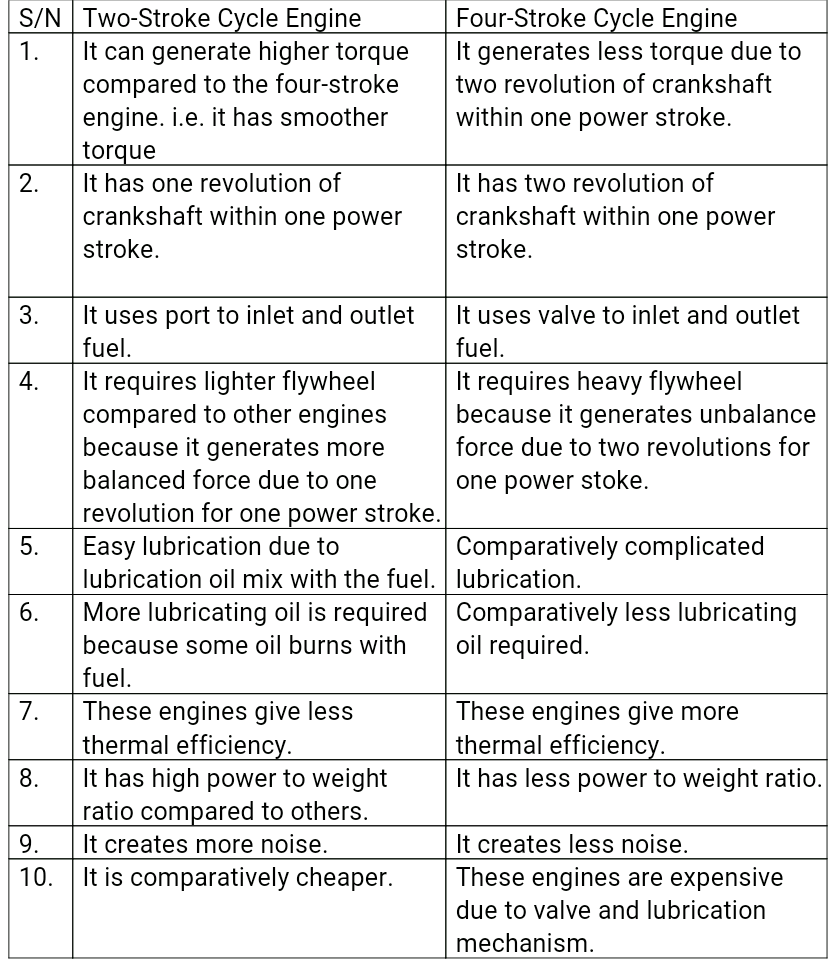 Image created by me.

Thanks for your attentiveness. I hope I fulfilled my promise of you grabbing something new from the article.

steemstem stemng adsactly wafrica nigeria
3년 전 by h-max45
$9.76
134 votes
댓글 남기기 2
Authors get paid when people like you upvote their post.If you enjoyed what you read here, create your account today and start earning FREE STEEM!
STEEMKR.COM IS SPONSORED BY

Congratulations @h-max! You have completed some achievement on Steemit and have been rewarded with new badge(s) :

The four stroke and the two stroke engines have different methods of completing a mechanical cycle..

Excellent post thank you. I love to work on cars as a hobby and it’s interesting the explanation of the different stroke engines. I always thought of boats when comparing two stroke to four stroke engines; I didn’t know that cars were four stroke but it makes sense it’s much more efficient.