It’s good to be back here today with you guys.

My last post was biological/agricultural science related and today I’m back home to the Mechanical aspect of Engineering. Yeah, Engineering is home.

I’m asking for your undivided attention as you read this article, because who knows, you might discover some things that will help you not to get scammed by your mechanic. I remember my little experience with some mechanic technicians when I had to spend a holiday with them in order to gain more experience in the auto mechanics field, there was an apprentice I was very close to then, he told me about how they do extort money from customers, he said they just have to name a part that doesn’t exist or has no problem and collect the money for the part. You guys can avoid this trap by knowing more about Auto Mechanics and I’ll be taking through an aspect of it today.

DEFINITION/FUNCTIONS OF THE STEERING BOX 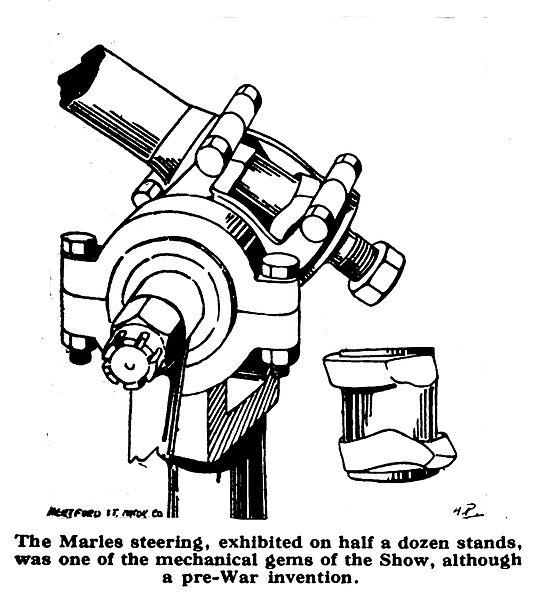 The steering boxes gear ratios varies from about 12 to one, up to 18 to one ratio, that is; the steering wheel will turn from two and a half times up to 3 and a half times to move the wheels from one lock to another. If the ratio is lowered, the movement of the wheel from one lock to another lock is will require a large number of turns. This makes it difficult for the vehicle driver to make a very fast change in the direction of the vehicle.

The efficiency is varied to control the degree of reversibility, and this makes the driver feel the wheels but yet does not subject the vehicle driver to road shocks.

CONSTRUCTION OF THE STEERING BOX

A standard steering box consists of a long steel shaft with a worm gear at one of its end and the steering wheel on the other end. It also consists of a drop arm or pitman arm shaft that passes at right angles to the worm gear. At the inner end of the pitman shaft (also called the cross shaft, sector shaft, roller shaft, gear shaft e.t.c.) involves the worm gear either through the gear teeth that wraps around a peg that is fixed to a ball nut that rides the worm.

On each sides of the worm gear end of the steering shaft consists of a ball or roller bearing that supports it. The purpose of the bearings is to remove side and end play in the worm.

Bearing adjustment is also provided by shims. The pitman arm shaft operates on bushings or needle bearings. It also consists of an adjustment screw that is responsible for the control of the worm and the pitman shaft clearances. A cast iron or aluminium alloy housing surrounds and hold all the parts in alignment. The housing is partially lubricated with gear oil to prevent wear and tears. Seals are also employed to prevent the escape of lubricant and also keep out dust and dirt.

There are various types of steering boxes which are named in connection to the gearing systems used.

The main types are;

The Worm and Nut Steering Boxes:

In this design, a large cylindrical steel or bronze nut is threaded over the nut, so as to let the steering wheel’s movement cause the nut to move to and fro in the box. The rocker shaft carries a peg which has the shape of a ball and fits well into the ball socket in the nut, and this makes it possible for movement to be transferred from the rocker shaft to the steering linkage. The nut is a sliding fit in the housing which duty is to act as a support for the lower and main shaft. Top support the top of the main-shaft and accept end thrust a bearing is introduced at the top end of the column.

The Worm and Wheel Steering Boxes: WORM AND WHEEL from Wikimedia under CC BY-SA 3.0

In this design, a complete gear is mounted to the pitman shaft and therefore meshing with a worm on the main shaft. In order to control wear, a part of the gear is only used, so that when wear occurs on the teeth, the unworn part of the gear can be in mesh with the worm. Even in some cases the gear is cut with the teeth on a slight bevel, the mesh of the worm and wheel will be adjusted.

The Worm and Roller Steering Boxes: 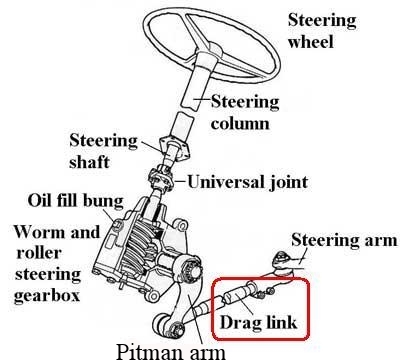 AN IMAGE ILLUSTRATING THE WORM AND ROLLER from Wikimedia under CC BY-SA 3.0

This steering box design was introduced in 1926 and is still being used today for overcoming friction. This steering box exhibits a mechanism in which the roller moves in an arc, the roller takes the shape of a hour glass so as to aid the maintenance of the clearance between the roller teeth and the worm, in all positions. The use of a parallel worm is not advised with a roller because the roller would move almost out the mesh when turned towards the end of the worm. Between the end cover and the box, contains shims which are responsible for the adjustment of the mainshaft bearing.

The Worm and Sector Steering Box: WORM AND SECTOR image created by me @h-max

This design is closely similar to that of the Worm and Wheel. It was one of the first steering box types. The design is so compact, so only a sector of the gear wheel is used. In this design, the worm attached to the mainshaft is responsible for transmitting movement to the sector on the pitman shaft. However, the mainshaft is supported by ball bearings which are adjusted by varying the thickness of the shims right under the end cover.

The Cam and Lever/ Worm and Peg Steering Box: 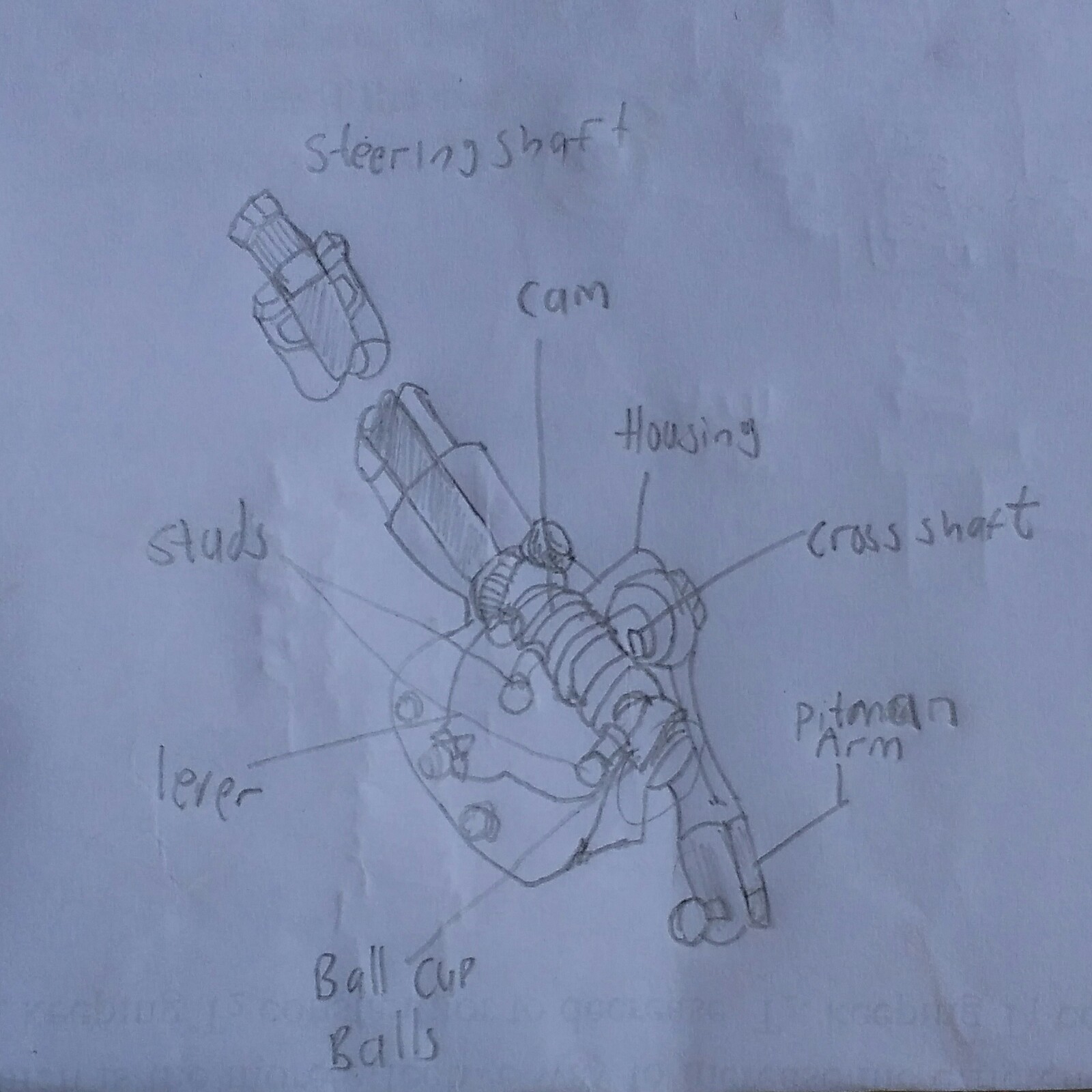 CAM AND LEVER image created by me @h-max

This design of steering box was introduced in the year 1923 to help reduce wear and friction. Both the cam and lever and the worm and peg steering boxes have similar designs. In this design, the mainshaft is fitted with either a cam or a worm and the rocker shaft is formed using a lever which carries a peg mounted in a bearing. The end of the peg is designed to fit into the groove in the cam, so as to make the steering wheel movement to cause the cam to wind the peg up and down. This whole movement is powered by the lever action through the rocker shaft to the drop arm.
The lower end of the mainshaft is supported in bearing which by the shims under the end cover, are adjustable. This design was introduced in 1940. It is an advanced version of the worm and nut and the worm and sector steering boxes. The design consists of some balls called the recirculating balls because they are capable of recirculating continuously from one end of the ball nut to the other end of the ball nut through a pair of ball return guides.
In this design, the ball rolls in between the worm and ball nut, then as soon as they reach the upper end of the nut, they enter the return guide we mentioned earlier and they roll back to the lower end of the nut, where they re-enter the groove between the worm and ball nut. This type of steering box is very efficient because losses due to friction is minute.

The Rack and Pinion Steering Box:

In this design, a small pinion meshing with the teeth of the rack makes up the gearing system. They are enclosed in a compartment which is transversely mounted in the vehicle. The compartment is partly oiled with lubricant, which is constantly transferred from side to side by the movement of the rack in the compartment. So that the movement of the steering wheel rotates the pinion to move the rack from side to side, the mainshaft is splined and clamped to the short shaft of the pinion. Tie-rods connect the ball joints to the stub axles.

ADJUSTMENT OF THE STEERING BOXES

If not for the fact that under a normal circumstance, the only servicing a steering box requires is a routine check to ensure that the level of the lubricant is satisfactory, I’d have discussed the servicing of a steering box in a more broad way. However, the steering box must be removed and overhauled to solve problems ranging from oil leaks, roughness of the bearing, excessive looseness to worn in the box.

Most steering boxes faults are provided with the following adjustments in the table below;

Image created by me @h-max

In the steering box, the greatest wear that can occur takes place in the straight ahead position of the box, this brings to the reason why the gear is normally made with a larger backlash in the lock positions.

“The backlash is the amount of ‘play’ between two parts. For instance, take the case of gears as an example, the backlash refers to how much one gear can be moved back and forth without moving the gear to which is the meshed".

This is done to reduce the risk of seizure at full lock when the steering box is adjusted to control the wear. It is essential to reduce the rate of end float and backlash to the minimum, but tight spots must be avoided.

To lubricate the steering box, normal gear oil(power steering oil) is filled into the box to the level of the plug.

I hope my little article as helped you guys improve your knowledge on Auto Mechanics, the steering aspect.

steemstem stemng adsactly wafrica nigeria
3년 전 by h-max45
$0.05
11 votes
댓글 남기기 12
Authors get paid when people like you upvote their post.If you enjoyed what you read here, create your account today and start earning FREE STEEM!
STEEMKR.COM IS SPONSORED BY

Great work!!!
The real essence of a steering is the steering box...
I dont know much about Mechanical Engineering but i surely have been educated

Thanks for stopping by. I hope my substituent posts will be more educative.

Keep on educating us.

You did a fantastic job writing this article.

It's so sweet turning the front wheels of vehicles with no stress. The smooth steering technology is such a good one...Beautiful one here! Kudos

Thanks bro. Thanks to the creation of gears, you can enjoy operating most mechanical devices.

Great job you did here. I'm fascinated by your creativity in drawing pictures of your own. It adorns the post. I haven't been able to learn the about the types of steering wheel mechanism until now.. Thanks for the educative post.

Thanks bro. I hope I improve more on my skills.

It is obvious that you did a lot of working this, I'm amazed about how many types of steering arrangements actually exist. All I've known about steering has always been on the surface. Kudos for the great work.