:) hello steemians! Some of the noble and rare metals in the world including platinum and iridium can show their presence in the Earth's crust and in iron meteorites and iron-iron meteorites that are chunks of large amounts of asteroids that have undergone a geological process early in the solar system.

Dr. Gerhard Schmidt from the University of Mainz, Germany, calculated about 160 metal asteroids that have a diameter of 20 km, which is estimated to have concentrations of these rare metals. The rare metals found in the Earth's crust are known as Highly Siderophile Elements (HSE). The Siderophile element is a group of transition metals that have a very high density bound to iron metal in solid or liquid conditions. The HSE group consists of rhenium (Re), Osmium Os), iridium (Ir), ruthenium (Ru), rhodium (Rh), platinum (Pt), palladium (Pd) and gold (Au).

According to Dr. Schmidt's key to understanding the origin of the planet is the knowledge of the abundance of HSE in the crust and mantle of Earth, Mars and the Moon. Dr. Schmidt found a uniform abundance of HSE in the top layer sample of the Earth's crust. After performing a comparison with the number of HSEs in the meteorite, it appears that this HSE has a cosmic chemical source.

In 12 years, Dr. Schmidt analyzed the concentrations of HSE on meteorite crash sites around the world, as well as on examples of Earth's crust and mantle. In addition, he also compared the data he got on Earth with Breccias collision data on the Moon brought by Apollo missions. The comparison is also done with meteorites from Mars, which is believed to be an example of Mars's crust and mantle.

HSE itself is located in the nebula that is the origin of Earth's formation. But as this young planet undergoes evolution, the existing HSE undergoes heating and then disappears with other heavy elements from the silicate mantle to the core of iron and nickel-rich metal. The existence of HSE in the mantle is still a debate and the widely accepted theory is that HSE is added by meteorite collisions as a layer of matter on the Earth's surface after the formation of nuclei about 20-30 million years ago after planetary accretion. It is estimated that the collision occurred from Mars-sized objects that trigger the formation of the Moon. 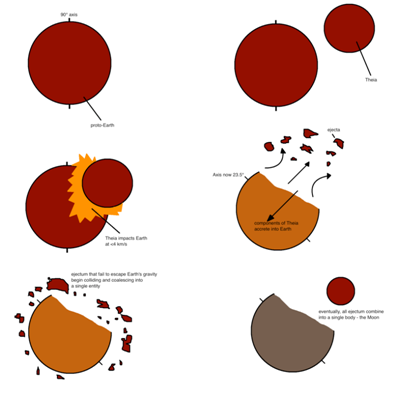 Artist's depiction of a collision between two planetary bodies. Such an impact between Earth and a Mars-sized object likely formed the Moon.,wikipedia

Different meteorite classes have a characteristic comparison of HSE elements that give an indication of where they are formed in the Solar System. And the HSE comparison characteristics in Earth's upper mantle (eg ruthenium/iridium element having ratio 2) matches the theoretical prediction of asteroid formation in the Mercury-Venus area.

Earth is a different object with a nickel-iron core, silicate mantle, and an evolved silicate crust. In this study, the HSE abundance ratios in the Earth's crust are much higher than those found in rock meteorites, known as chondrites. These chondrites represent the earliest materials that form the Solar System. The HSE ratios were found to be similar to those in the iron-iron meteorite. The meteorite is a large piece of an asteroid that has undergone internal heating in the past to form a liquid metal core. HSE is typically concentrated in the liquid core and at the boundary with solid matter, ie, in rock sheath. However, the true ratio of different metals depends on the physical conditions in which they are formed.

The HSE ratios found in Earth's top mantle are not entirely the same as meteorite specimens found worldwide. The only resemblance is the ratio of HSE to the Charlotte metal meteorite.

Some meteorites from Mars that are thought to represent Mars's crust also have HSE values that are almost similar to the meteorite group of iron and rock meter. Thus it is estimated that the same process also occurs on Mars. Thanks!

steemstem science geology space meteorites
4년 전 by irza53
$2.99
110 votes
댓글 남기기 13
Authors get paid when people like you upvote their post.If you enjoyed what you read here, create your account today and start earning FREE STEEM!
STEEMKR.COM IS SPONSORED BY

ADVERTISEMENT
Sort Order:  trending
[-]
geopolis54  ·  4년 전
Your post has been personally reviewed and was considered to be a well written article.
You received a 10.0% upvote since you are not yet a member of geopolis and wrote in the category of "geology".

thank you, you give good advice!

I'm sure cheetah-bot is wrong on this occasion.

Why? I do not take what you allege!
not even a single paragraph that I took!

do I have to make a new vocabulary?
impossible!

Cheetah is not always right. It also bugs me immensely when it flags my original prose as well.

yes, I know he's just a bot.
in the future, I should be agiler than him: D
thanks

Great post Irza, don't worry about the bot. It does it sometimes, leave a comment yourself using ## at the begining of a new line and it will make the comment big. Just make disclaimer of something you didn't "cheat".

Thank you for your advice,
I will not stress, maybe just annoyed. :)

:) ... your imagination has surpassed me
thanks