hello friend steemians, my post this time back playing in space. I hope you guys do not get bored reading it. Happy reading and hopefully useful!

What is the shape of the universe? Is it unlimited? or is it limited? Since 2003 there is a notion that states the universe is donut-shaped, limited and relatively smaller. This idea became popular when the cosmologist discovered an unexpected pattern in the cosmic microwave background (CMB), the radiation of a big bang.

CMB consists of stains or cold and hot spots that represent ripples in the density of a baby universe, like waves in the ocean. These stains will be seen in the CMB distribution indicating a temperature difference. In an infinite universe, there should be various wave sizes but cosmologists are surprised to discover that longer wavelengths are lost from CMB measurements performed by NASA's Wilkinson Microwave Anisotropy Probe. One of the reasons why there are waves missing is because the universe is limited. A toroidal model of the universe which has superficial similarity to the theory described in this article.,credit image

According to Frank Steiner, a physicist from Ulm University in Germany, "you can think that the universe is like a musical instrument, it can not withstand vibrations that have wavelengths greater than the length of the instrument itself."

Cosmologists propose an idea of the shape of the universe wrapped around it, such as the football shape or even the shape of a donut. In each case, the universe will seem infinite, because we will never find its edge. So if we can travel in the universe in any direction, then we will return to the point where we begin. Just like when around the globe.

But this understanding then decline. Cosmologists predict a wrapped universe will behave like a glass platform, with images of distant objects being repeated several times in space. Pattern search conducted by Glen Starkman of Case Western Reserve University in Cleveland, Ohio, did not yield any results.

A re-analysis of 2003 data by Steiner and his colleagues to find other forms including 3-torus, and donut form. Although the name sounds beautiful, this form is very difficult to visualize. The 3-torus form is an extension of the shape of a donut that can be formed from a rectangular sheet of paper.

Roll the two opposite corners to bend the cylinder and the second step, the other two opposite shapes to form a donut. The 3-torus shape is formed in a similar way, but it must start a cube and then attach each opposite corner. This is done so that when you want to get out of one of the surfaces of the cube, it will be seen we will enter again through the opposite direction. 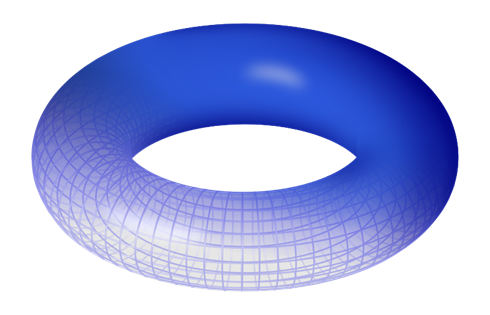 A torus of revolution,credit image

Other Forms That Allow

Steiner's team analyzed using 3 different techniques to compare predictions for temperature fluctuations in different areas. A comparison of temperature fluctuations is done to match the infinite model of the universe as well as the shape of the donut universe. In each case, the donut form shows the compatibility with data from Wilkinson Microwave Anisotropy Probe. The team can even guess the size of the universe, which is expected to take 56 billion light-years to be surrounded.

Jean-Pierre Luminet of the Paris Observatory in France, who proposed the idea of a soccer-shaped universe also agreed with Steiner's analysis that the donut form is still the most popular candidate. But he added that the possibility of a football-shaped universe still exists and remains alive.

But Starkman cannot be convinced by the discovery of Steiner's team. To him, the discovery had not given any belief, and for him, it could be a small universe but that would not be the answer.

On the other hand, Steiner believes the data to be acquired by the European satellite Planck that has been launched will be able to provide answers to the various questions that exist today.

Philosophically for Starkman, the idea of a finite universe that could one day be fully explored is indeed very interesting. Unfortunately, Starkman added, "Since physics cannot be determined by philosophy, I hope the answer will be given by Planck." That is all and thank you!

steemstem science space esteem stemng
4년 전 by irza53
$2.68
38 votes
댓글 남기기 4
Authors get paid when people like you upvote their post.If you enjoyed what you read here, create your account today and start earning FREE STEEM!
STEEMKR.COM IS SPONSORED BY

Interesting thoughts, if we should find ourself to have this kind of universe it opens for all kinds of twists of current physics

Nice article, I very much like this concept, being a physicist I see the toroidal behaviour in some many different physical processes.

Congratulations! This post has been upvoted from the communal account, @minnowsupport, by irza from the Minnow Support Project. It's a witness project run by aggroed, ausbitbank, teamsteem, theprophet0, someguy123, neoxian, followbtcnews, and netuoso. The goal is to help Steemit grow by supporting Minnows. Please find us at the Peace, Abundance, and Liberty Network (PALnet) Discord Channel. It's a completely public and open space to all members of the Steemit community who voluntarily choose to be there.