Anti-matter: the fuel of space

When we hear the term Anti-matter, we think of it as the opposite of regular matter, which it is. But where does it come from? Anti-matter is the opposite of regular matter. Like regular matter, it contains protons and electrons. Unlike matter, they're negatively loaded. Any contact with regular matter will instantly annihilate it. Like an atomic bomb, it will release it's energy on the mass that it touched. The difference is that when an atom bomb detonate, it will only release about 10-15% of its energy, but when Anti-matter annihilates itself, it will release 100% of its energy. Basically, if you had Anti-matter the size of a raisin (in 1 gram), it would be enough to blow the entire city of New York. The fallout would be bigger than Hiroshima and Nagasaki combined.

the advantage of using Anti-matter

Although Anti-matter would be a lot more dangerous than an atomic bomb at such minuscule weight, it's is also very useful for other purposes. For example, several studies showed that anti-protons has a chance to cure certain kinds of cancer. It can also be used militarily, by the theorized Anti-matter bullet. The tip of the bullet will contain 100 billionth of anti-protons. Which basically means that just one bullet is enough to destroy a tank. Outside the military, it can be also be used as a fuel source for space traveling. It's been hypothesised that using anti-matter as a fuel source could take us at speed of 50% the speed of light, 50%! If we ever used Anti-matter as fuel, then we would be able to visit our nearest star, Proxima-Centauri b in about 2 years.

the scarcity of anti-matter

You may ask, why haven't we done any of these things at all? Although this could become a future fuel source, the fact that it's been rarefied, very expensive (1 gram of Anti-matter is worth more that 1 gram of diamond), it's price tag has changed during the course of the 21st century. Where it was cited that it would be worth almost $25 trillion (85% of the world's GDP combined) and also very hard to produce. The Large Hadron Collier (the LHC), operated by CERN in Switzerland is capable of producing 10 million anti-protons per minute, but at that rate of speed, it would take CERN at least 100 billion years to produce just 1 gram. We would have passed away before we even could use the produced anti-protons. Which we don't even know how we're gonna store, since Anti-matter annihilates matter if it gets into contact with it. We have to suspend the material, that way it won't go off if it comes into contact. CERN managed to store produced antihydrogens for 17 minutes before annihilating itself. Since just 1 gram is enough to destroy a city, we have to store it in a suspended environment. Anti-matter can also be produced naturally in earth's atmosphere, when high cosmic rays impact the earth, creating very small amounts of anti-protons, that annihilates itself 5 minutes later. 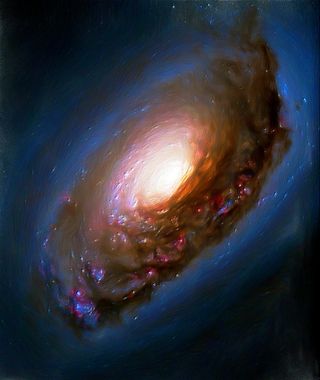 There may even be galaxies made up of Anti-matter, but if they even exist, we haven't found any so far.

steemstem science physics space technology
3년 전 by jankeman36
$3.77
21 votes
댓글 남기기 11
Authors get paid when people like you upvote their post.If you enjoyed what you read here, create your account today and start earning FREE STEEM!
STEEMKR.COM IS SPONSORED BY

Although Anti-matter would be a lot more dangerous than an atomic bomb at such miniscule weight, it's is also very useful for other purposes.

I see that you're using the #steemstem tag. That's awesome! But, you're not using it correctly as per the @steemstem team wants it to be used.

I suggest following the guidelines in the following posts by @steemstem

I hope to see more from you in the #steemstem tag!

Sorry for not complying with the tag rules, thanks for warning me

It's perfectly fine. I was just letting you know for future reference. :)

I will be featuring it in my weekly #technology and #science curation post for the @minnowsupport project and the Creators' Guild! The @creatorsguild is a new group of Steem bloggers and content creators looking to improve the overall quality of their niche.

Wish not to be featured in the curation post this Friday? Please let me know. In the meantime, keep up the hard work, and I hope to see you at the Creators' Guild!

If you have a free witness vote and like what I am doing for the Steem blockchain it would be an honor to have your vote for my witness server. Either click this SteemConnect link or head over to steemit.com/~witnesses and enter my username it the box at the bottom.

Congratulations @jankeman! You have completed some achievement on Steemit and have been rewarded with new badge(s) :

There may even be galaxies made up of Anti-matter, but if they even exist, we haven't found any so far.

And even if we found them, how could we interact with them? there wouldn't be a way because the mere contact with us will make everything blown up.

At least we know they would exist