It was raining heavily today, so I've decided to just chill around while reading a book with a hot beverage. While flipping through the textbook of physiology belongs to my son, I read a pretty interesting topic today. It's about ovulation. I've always interested to study Biology but since my father was pushing me to pursue something that I'm not interested in, I decided to quit school and just work. When I was growing up, there is no such thing as negotiating with my parents. If they've chosen for us, we will obediently follow. Well, I'm not one of those "obedient" kid. I love Biology but my father wanted me to study literature and maybe one day, I can become a teacher. I quit after a year of studying literature. Funny how things turn out isn't it? 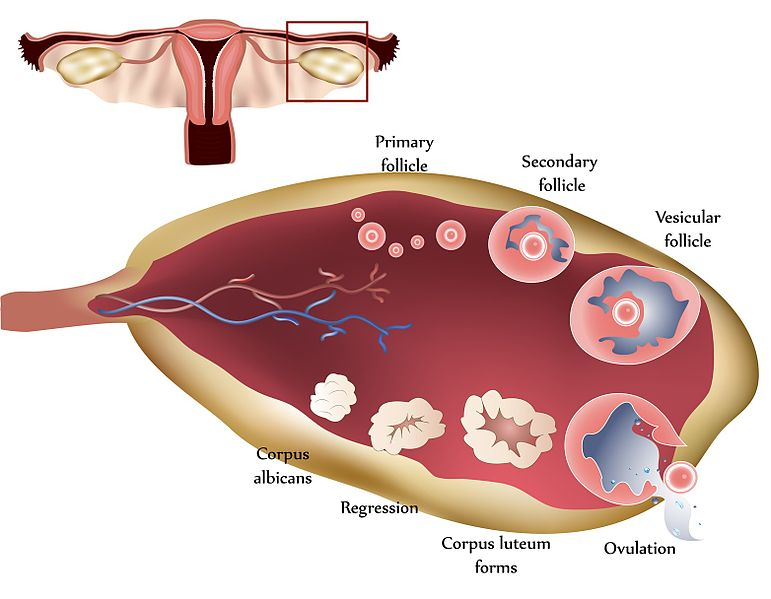 Ovulation refers to the biological process which releases an egg (ovum) from a woman's ovaries. To put it simply, after the egg has been released, it will propel its way through, down a structure called fallopian tube, where the fertilisation process would take place. This process usually took one day and commonly occurs two weeks before menstruation (regular discharge of mucosal tissue and blood) starts. However, the timing is not rigid. Every woman has a different timing cycle which might differ from month to month. It's crucial for a woman to know how to estimate when she might be ovulating when she's trying to get pregnant. This knowledge is important because when a secondary oocyte of an ovarian cell is released from the follicles (ovulation), the woman becomes fertile and can get pregnant easily.

When a female baby is born, there are two million oocytes (immature eggs) which are available inside her ovaries. The amount of eggs that she will be able to produce is limited by the number of available oocytes that they are born with. Male's sperm can be produced for an extended period of times, but female's version of "sperm" can only be produced in a limited amount. Eventually, oocytes will run out, and pregnancy will not be possible anymore. If you're thinking, that's not a big deal; we have two million available oocytes right? Well, the number would decline as you ages. By the time a girl reaches puberty, only 300,000 oocytes remain. The number will keep on dropping, and it is estimated an average woman can produce up to 400 eggs for ovulation during her reproductive lifetime. According to the Centers for Disease Control and Prevention, a possible sign which indicates that a woman is still ovulating is the predictable menstruation period. If you think your body still bleed at roughly the same day of the month, then you're most likely still fertile.

Menstruation is a normal biological process which occurs among women. The cycle would take about 28 days to complete, but this number serves as a guideline only. Some woman doesn't even comply with the 28 days rule so the range could be as short as 21 days or up to 35 days long. As it is practically difficult to determine when is the first day of the menstrual cycle, general consensus agrees that the first day of the cycle can be identified as the first-day woman's bleed. In actuality, menstruation occurs at the end rather than the beginning of the cycle. So the cycle will begin with five days menstruation period, followed by nine days of proliferative phase and finally secretory phase. The "bleeding" would depend on the changes in the lining of a structure called endometrium. This structure contained abundant tubular glands which lie in a vascular framework called stroma and open into the uterine cavity.

At the end of the bleeding (menstruation) phase, the endometrium would appear thin with the majority of the glands are straight and short. The ovary seems inactive but by the action of a gonadotrophic hormone, an ovarian follicle which resides in the ovary would become active and ripe. Ovarian follicles contained an ovum which is surrounded by granulosa cells. This granulosa cell will multiply and produce a hormone called estradiol which is responsible for making proliferative changes to the structure of the endometrium. This will stimulate the endometrium to grow thicker, become vascularized and the tubular glands to grow longer. This is the starting point of the ovulation process.

After a while, in the mid-cycle of the ovulation, ovum will be erupted out of the follicle and travel its way to the fallopian tube. The follicle will be filled with lipids which are accumulated by the granulosa cells making it appear saffron-yellow. The follicle is now called corpus luteum. Corpus Luteus will secrete progesterone and estrogens which are crucial for the secretory phase of menstrual cycle. The endometrium would be at its peak thickness, preparing for any possible fertilisation to house the ovum. If there is no fertilisation take place, the ovum would die which led to the degeneration of corpus luteum. All of the reproductive hormones will start to decline which later led to the degeneration of endometrium. Blood and tissue would appear in the vaginal discharge which marks the first day of menstruation.

Now I think you got some idea about why do we (women) bleed every months or so. Menstruation and all of this menstrual cycle are not easy to endure and dealt with. It came with a set of psychological side effect which includes low mood, agitation and sometimes aggressiveness. Well, sometimes we do crave some chocolate to boost up our endorphine so if you encounter any agitated woman, give them some chocolate.

steemstem steemiteducation science biology teammalaysia
5년 전 by mawarmerah48
$1.73
42 votes
댓글 남기기 1
Authors get paid when people like you upvote their post.If you enjoyed what you read here, create your account today and start earning FREE STEEM!
STEEMKR.COM IS SPONSORED BY