A Day with Microbiologist: Isolation and Purification of the Small Peptides Inhabiting the Antimicrobial Properties

Antimicrobial peptides are proteinaceous defense molecule produced by almost every class of organism and are a part of innate immune response. Plants are known to produce these AMPs in a wide variety and in huge amount for the defense against the insects and all. There are other eukaryotes also which are known to produce such peptides to overcome the microbial infection, we will be discussing it some other time. While prokaryotes produced these AMPs to sustain in their population. Down the ground in the microbial world there is huge fight for existence is going on and the fittest will survive. Microorganism produce these peptides to inhibit the growth of other species so that their own generation can flourish. Class of these peptide is huge and are divided on the basis of their charge and structure they attain on proper folding (1). PDB 1E68     Structure made in UCSF Chimera 1.10.1
The size of these antimicrobial peptides can be in a range of 15-40 amino acid, these are short peptides and after proper folding forms a compact structure. The proportion of amino acids in these peptides are mostly containing positively charged amino acid (Lys or Arg) and hydrophobic amino acids. The secondary structure attained by these peptide are both α-helix and β-sheet and due to the presence of cysteine in the peptide disulfide bond forms and the structure become more robust. These peptide are known to attack on the cell membrane of the bacterial cell and the positively charged amino acid helps in the interaction and the hydrophobic amino acid provide them the stability in the environment. Due to their mode of action, these peptide are of differently charged and show different effect on membrane permeability (2). Wikimedia Commons
Anionic peptides rich in the positively charged amino acids (Asp or Glu) and are mostly found in the amphibians and humans. Linear cationic α-helical peptide does not contain cysteine are found in amphibians, rabbit and humans. Cationic peptide enriched for specific amino acid are rich in pro, gly, trp and phe are produced by honeybee, pigs and cattle. Anionic and cationic peptides that contain cysteine and form disulfide bonds generally involves 1-3 disulfide bonds are produced by horseshoe crabs, fruit flies and humans. Frogs are among the most common amphibians known to produce these antimicrobial peptides as a defense mechanism. Mode of action of these peptides differ and some of them can only restrict up to bacterial population while some attack the fungal too. Most of the time they attack the cellular membrane but some of them are also known to interfere with the DNA and the protein folding mechanism (3). The charged group and the hydrophobicity of the molecule allow them to attach to the microbial surface and due to their compact shape they can enter the cytoplasm through the transmembrane protein. These AMPs can show their inhibiting activity against gram-positive, gram-negative, fungal, viral and even for cancer cells also. As I already described almost all of the living being produces some kind of antimicrobial peptide for defense against the microbial invasion. But microbes also secrets such proteins to resist the growth of other species of microorganism and these antimicrobial peptides or the toxic peptides produced by bacteria are called as Bacteriocin (4). 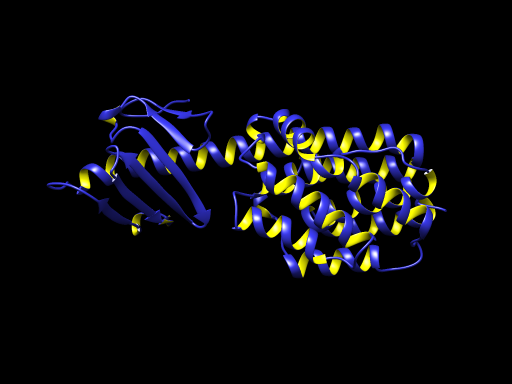 PDB 1A87     Structure made in UCSF Chimera 1.10.1
Bacteriocins are short peptide produced by the bacteria to inhibit the growth of neighboring or closely related bacteria. Andre Gratia was the first to discover these molecules and in the process of finding it he also discovered the bacteriophage. The first one he discovered was colicine as it was known to inhibit the E.coli. These bacteriocins can be classified according to their mechanism of attack, strain producing it and the resistance mechanism (5). One more group of bacteriocin which contain the modified lanthionine are known as the lantibiotics. They are further divided into bacteriocins produced by gram positive and from gram negative (6).

PDB 3TLC     Structure made in UCSF Chimera 1.10.1
Bacteriocins from Gram negative - Small sized group of bacteriocins from the gram negative bacteria called Microcin. These are produced by E.coli and it targets and eliminate the other gut flora which are usually present there. Colicin like bacteriocins (CLB) produces by E.coli (7). These are big protein molecule of around 30-90 kilodalton and have all the regulatory elements and the non-ribosomal peptide sequence (NRPS) regions. Tailocins produced by the Pseudomonas aeruginosa a fluorescent green color producing bacterial culture, some of its subgroups are also called pyocins.

Bacteriocine from Gram Positive – They are subdivided into four class of bacteriocins; Class I which deals with the small sized peptide below 5KDa example: nisin. Class II contains peptide below 10KDa which have N-terminal consensus sequence and C-terminal is causing the cell membrane permeability in the target cell. Class III are also known as bacteriolysin and functions by cell lysis and are more than 10KDa in size. Class IV have some sugar group attached to the protein part and enhancing the killing activity of the peptide (8). Why and when Bacteria produces it?

You must have guessed the answer of this, bacteria produces these peptide in the stationary phase of their growth. The time when the nutrient start to get finish and the population of bacterial cells are huge and all of them wants the food at that time bacteria secrets such peptide to kill the weak ones that’s why they are also called as secondary metabolites.

How it can be observed? 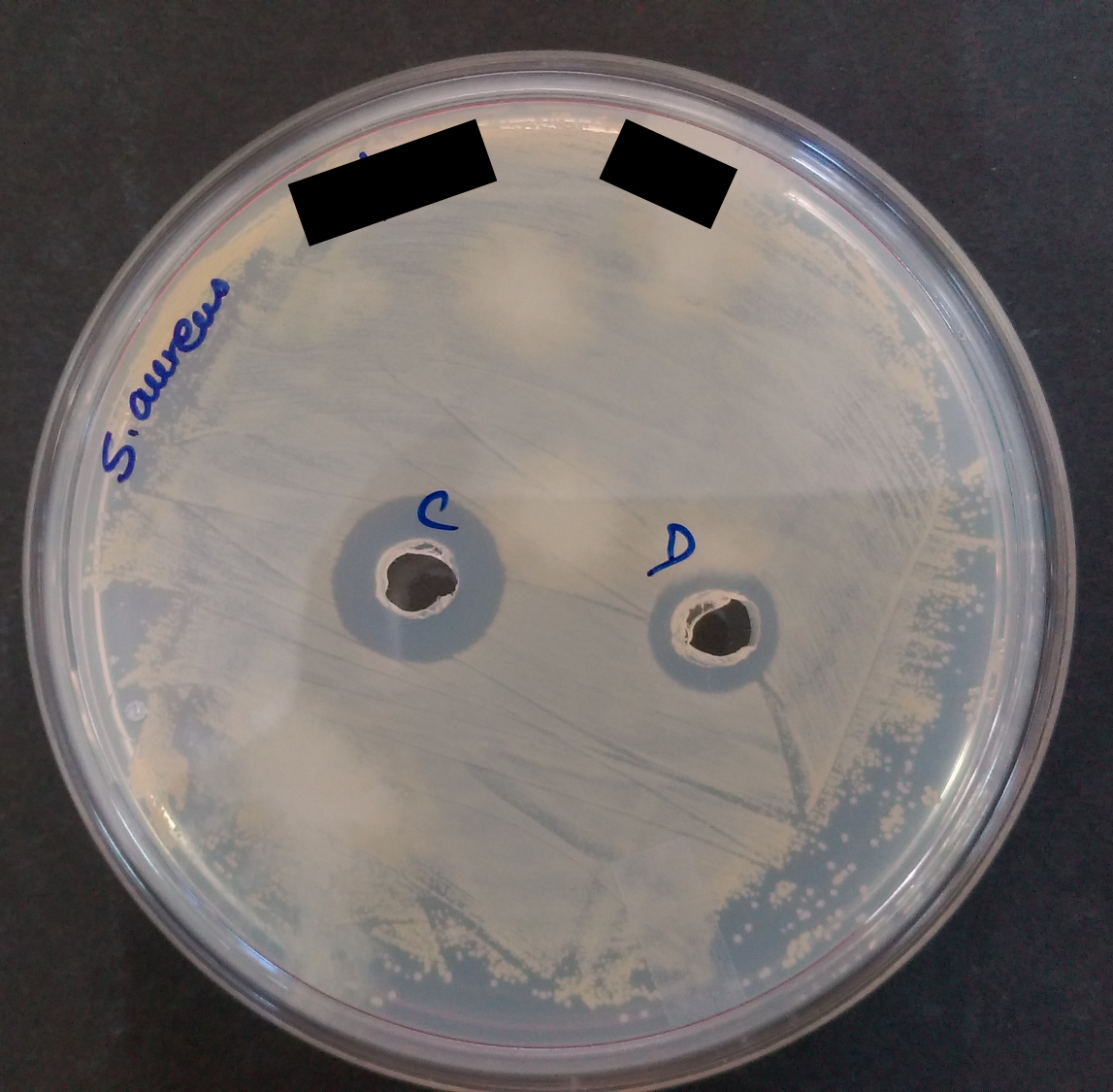 Well Assay showing the zone of inhibition
There are several ways you can visualize the antimicrobial peptide producing bacteria. First, in a population of different bacteria where you see a single colony separated from others and making a zone which hinders the others to come and grow there. Second, if you have a culture which is known to produce the peptide grow it and put a well activity assay, something like in the figure. You can easily observe the zone of inhibition. The bacterial species which show some zone of inhibition in a culture plate which was processed to get different colonies and have different bacterial culture on it. That bacteria first need to be picked and inoculated separately. After certain hours of its growth the culture was subjected to look for the antimicrobial activity on some of the standard strains which basically contains few gram positives, few gram negatives and fungi. On further information of antimicrobial activity against these cultures these peptide are taken to isolate and purify the peptide from the bacterial culture.

The whole process of its separation incudes multiple techniques: the first step would be to grow the bacterial culture in bulk and as these AMPs are produced as extracellular proteins can be extracted from the supernatant of bacterial culture. Building of huge amount of froth in the media is a sign of production of extracellular proteins. Through centrifugation these peptides present in the supernatant can be extracted. Next step would be, the crude extraction procedure which include the use of some silica based resins which have the affinity for binding to the hydrophobic molecule and rotating the supernatant with these resin for few hours can separate almost all the present peptides in the supernatant to the resins and by washing the resin again with the methanol can give you the crude extract of the AMP from your bacterial strain. As it is in the crude form and further needs more purification for use. Purification of the Extracted peptide

The extracted peptide was then purified through different chromatographic method, all of these are dependent on the charge of the peptide and the size of the peptide. Gel-filtration column chromatography with different silica resins can be used to purify these peptide Sepadex G50, G100 G150 are the common ones. When the peptide contains some lipid part, the purification protocol changes totally as the lipid containing parts responsible for the antimicrobial activity would be coming near the size of 1-2KDa so it will be very much difficult to isolate it through the same column. Hence, acid precipitation could be performed to isolate such peptide. Ammonium precipitation a salting out process can also be used to purify protein from such crude extract. If anyone wants, I can share the whole protocol for all these process for the purification of these small peptide.

All the collected fractions from the column was then checked for the activity and on confirmation was pooled in a single container and was further subjected to High Pressure Liquid Chromatography (HPLC) and Mass- Spectrophotometry for the size determination. Preparative HPLC can be used to purify the whole bunch of isolated protein, which will give you the extra purified protein. 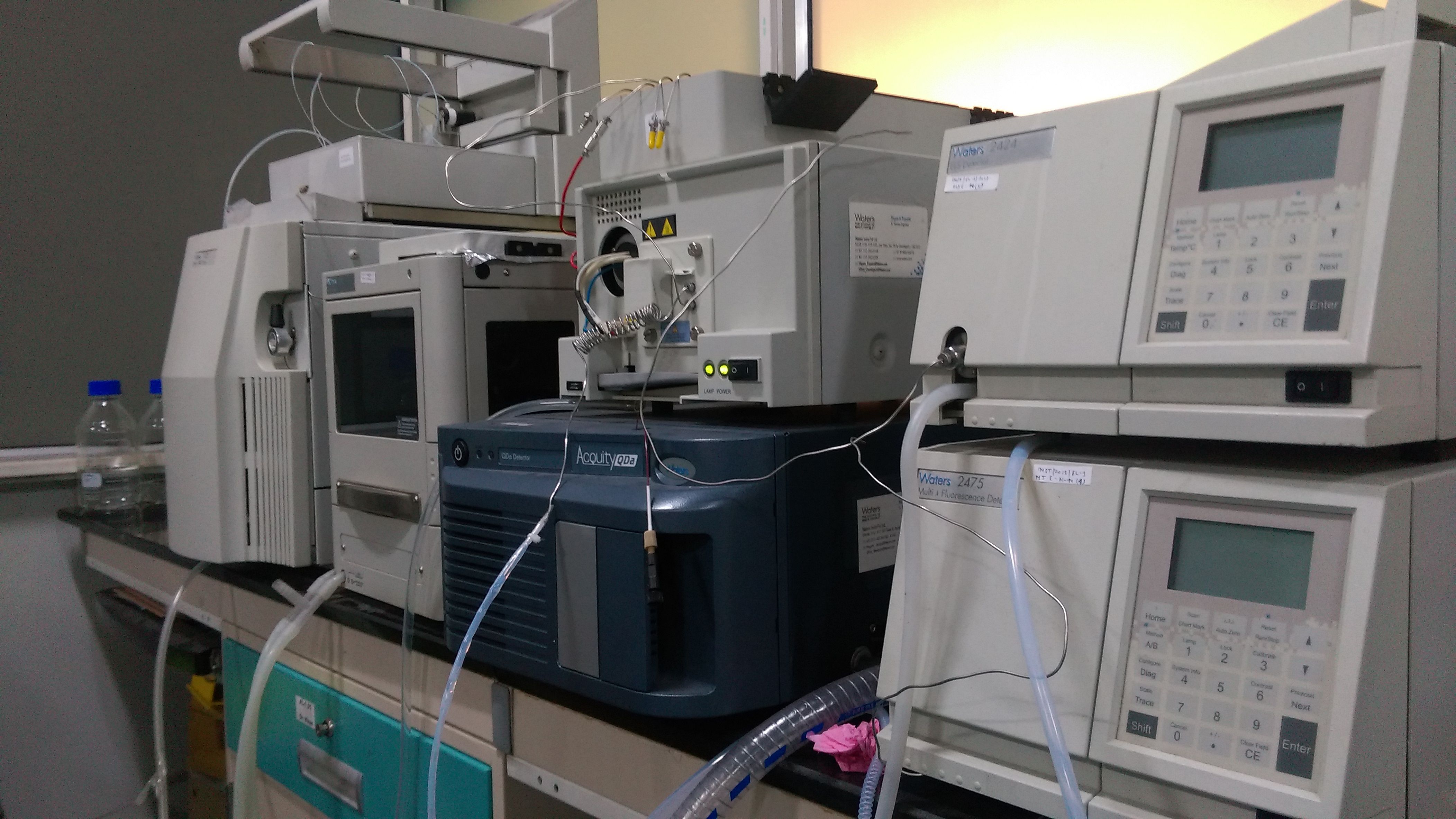 HPLC system for the purification of the extracted Antimicrobial Peptides

I know this experimentation part could be little boring but next time on continuing to the same topic I’ll talk about the fascinating side of these peptide which might find interesting to you all.

Images which are not source are taken by me and do not violates any copyright.

For most of the terms I have hyperlinked with the simple Wikipedia page, that will make you understand if not feel free to ask anything below in the comment section. I will be happy to have them and will try to resolve doubts if anyone have.

steemstem steemiteducation science davinci-times microbiology
4년 전 by micro2450
$53.80
234 votes
댓글 남기기 6
Authors get paid when people like you upvote their post.If you enjoyed what you read here, create your account today and start earning FREE STEEM!
STEEMKR.COM IS SPONSORED BY

Immagine CC0 Creative Commons, si ringrazia @mrazura per il logo ITASTEM.
CLICK HERE AND VOTE FOR DAVINCI.WITNESS
Keep in mind that for organizational reasons it’s necessary to use the “steemstem” and “davinci-times” tags to be voted again.
Greetings from @davinci.witness and the itaSTEM team.
$0.53
3 votes
댓글 남기기
·
[-]
micro2450  ·  4년 전

Nice work. I remember doing those well assays (though I called them spot on lawn assays) and MIC determinations with a Biocycler (at least I think that's what it was called). Either way, its nice to see scientists explain their work :)

Maybe we should CRISPR-Cas9 ourselves some froggy anti-microbial resistance! :D

Last year it was reported that microbiologists at a medical school in Norfolk, Virginia saved a man who was terminally ill with a serious infection. No anti-bacterial medicine was affective. As a last resort, large amounts vitamin C (ascorbate) was delivered into him and the man was out of the hospital within a week.

Can oxidative stress cause us that much harm? I hope you address this in your future post.

Thanks @quiplet
I don't think there is any relation between the peptides synthesized for the defense with the oxidative stress and if there is any I'm not sure of that.