In some of earlier posts I have talked about the classification of microbial world and what a Microbial Taxonomist do to characterize them? So, I thought why not to expand it and explain it in full detail, the identification and classification system of these microbes. Bacterial taxonomy is not something which excites the new researchers or scientists to work on until the development of techniques involving the sequencing of rRNA, the complementary DNA and the role of these genes in the phylogeny system of microbial species and all organism came into picture. All these new techniques motivates us for the phylogeny and the taxonomy of all species, where bacterial taxonomy could also be given a space in phylogeny. 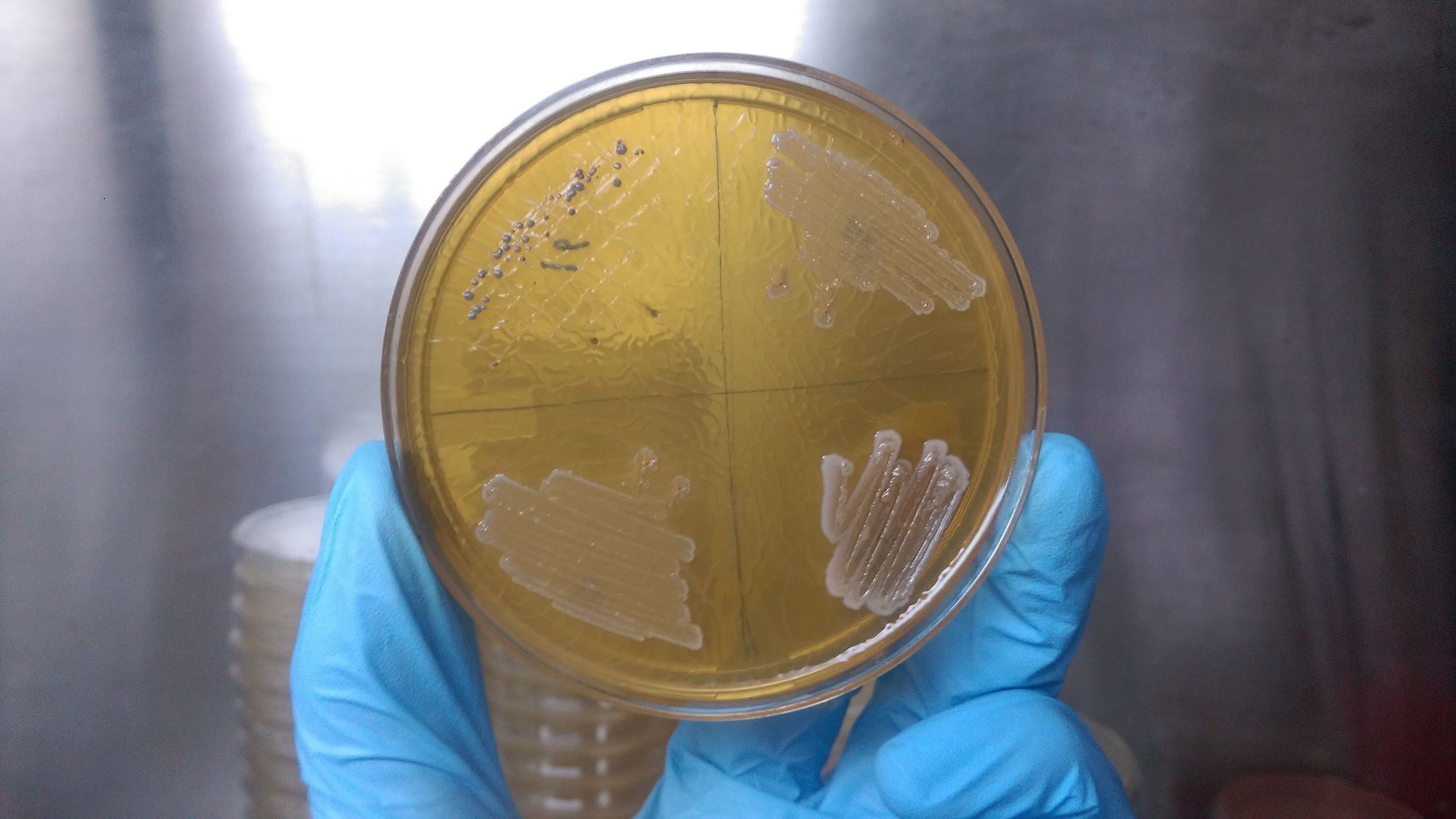 Polyphasic Taxonomy came into picture 25 years ago, which considered the genotypic, phenotypic and phylogenetic approach for the bacterial taxonomy. Colwell gave the term “Polyphasic Taxonomy” and used it for the presentation of levels in the taxa. Microbial systematics or taxonomy are generally divided into three parts: Information from the Bacterial Polyphasic Taxonomy

Polyphasic taxonomy generally involves the characterization study of genotype, phenotype and phylogenetic information. The genotypic information involves the data came from the nucleic acid (DNA and RNA) in cell, while the phenotypic data deals with the different proteins they produced and their function and different chemotaxonomic markers and more. I’ll try to just give a brief of all the different types of characterization studies involved in the process of characterizing a new species. 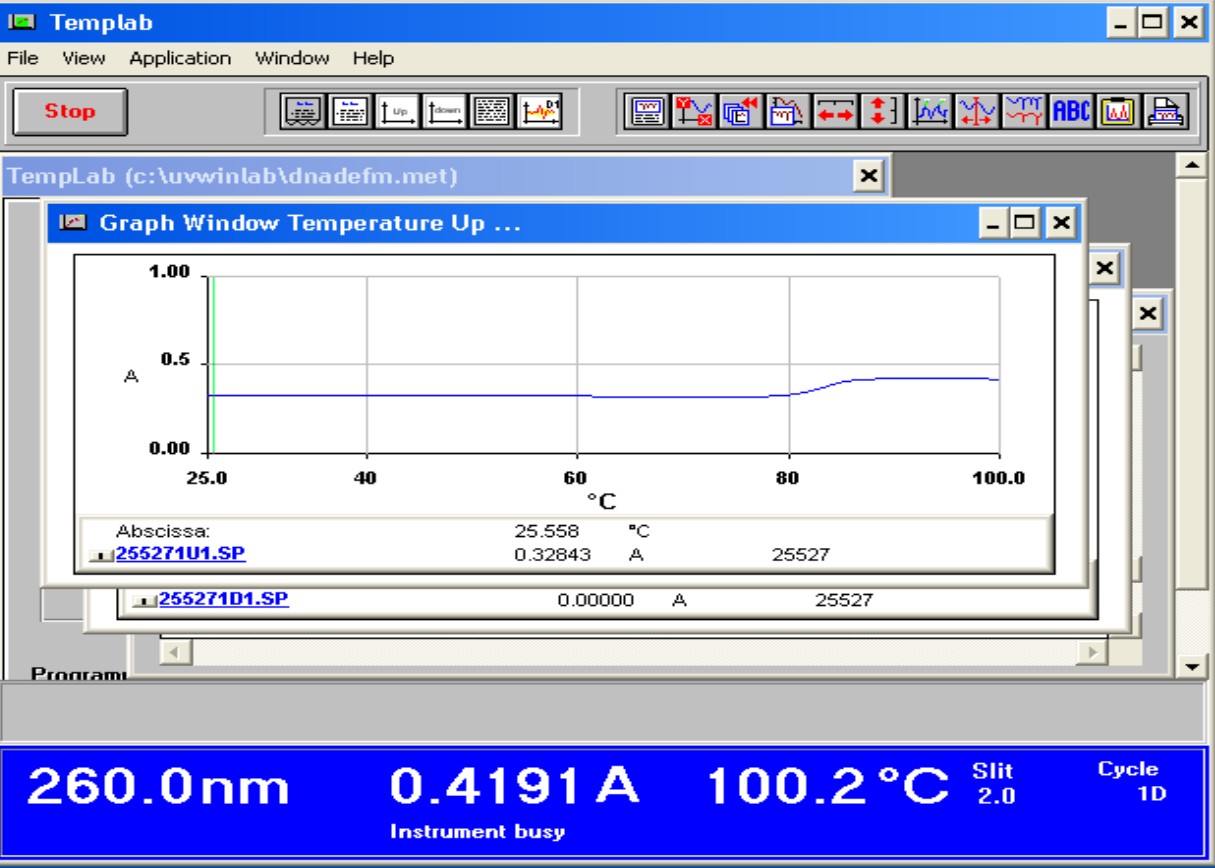 G+C content%
Genotypic Method: These generally deals with the study related to the DNA/RNA. These new methods undoubtedly shows better identification processes as the nucleic acid encodes all the necessary information needed to differentiate two species. Determination of the G+C content the mole percent of cytosine and guanosine is like method used for the genotypic studies. The mole percentage of these nucleotide vary from 24 to 76% from different species in bacterial populations, while if there is any change in the mole ratio of more than 3% in two bacterial species than they can be considered as the two different species. The whole genomic DNA of a bacterial species is subjected to a range of temperature and the temperature at which 50 percentage of the DNA get converted to single strand, that point is considered as the melting temperature of the genomic DNA and from there the G+C content can be derived, I’ll explain the whole process some other time or you can just go for the references. DNA-DNA hybridisation
DNA-DNA Hybridization is also one of the genotypic method gives the more detailed and precise identification of the new species. The genomic DNA from the new species was hybridized with the radioactive labelled Type strain’s DNA, the S1 nuclease used for the denaturation of the double standard DNA and the single standard molecule will let hybridized onto the labelled DNA. 70% DNA molecule is same in all the bacterial DNA and if the bacterial species shows less than 70% similarity up to 5-10% than that shows the new species. rRNA homology study is gaining the interest now a days, for studying the phylogeny relation between bacterial species sequence of rRNA is the best target to fetch for. The conserved regions present in the rRNA molecule of the 30S subunit of the ribosome contains variable region which generally differs in different population of bacterial species and can be used to differentiate the new one from the database using BLAST (Basic Local Alignment Search Tool). 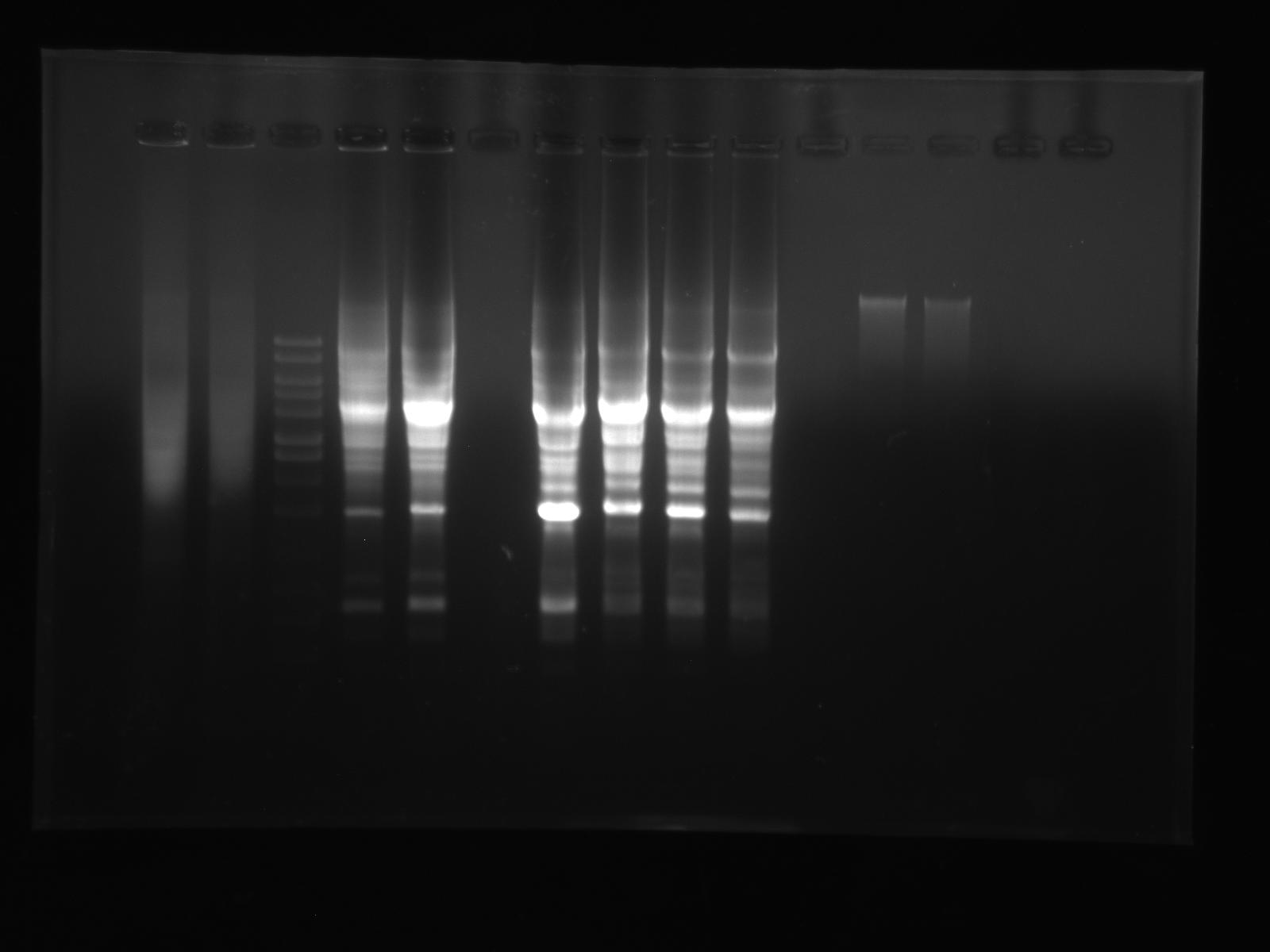 DNA based typing
DNA-based typing methods generally been performed to divide the species into subspecies, earlier the subtyping of any species was done by the phenotypic methods like the physiology and biochemical analysis, serological tests, antibiotic susceptibility test, phage typing and many more. DNA directed typing came into fashion in few years and gained interest because it is easy to perform and their high discriminatory. The first DNA-based typing was based on the whole genome restriction fragment analysis, where the genome was fragmented by the restriction enzymes and run on gel electrophoresis from that Restriction Fragment Length Polymorphism (RFLP) was established.

Restriction endonuclease
Some of the bacterial species do inhibit the plasmid and their plasmid can also be used for the DNA typing study and the same procedure follows for plasmid DNA also, but both the methods have the disadvantage of ending up in the complex pattern due to the difference in the fragment of DNA which become difficult to compare. The extra fragment of the DNA can be reduced by using the appropriate restriction endonuclease and this is called low frequency restriction fragment analysis. The fragmented DNA then transferred to a membrane and hybridized with the labeled complementary probes from there the hybridized ones can be quantified. 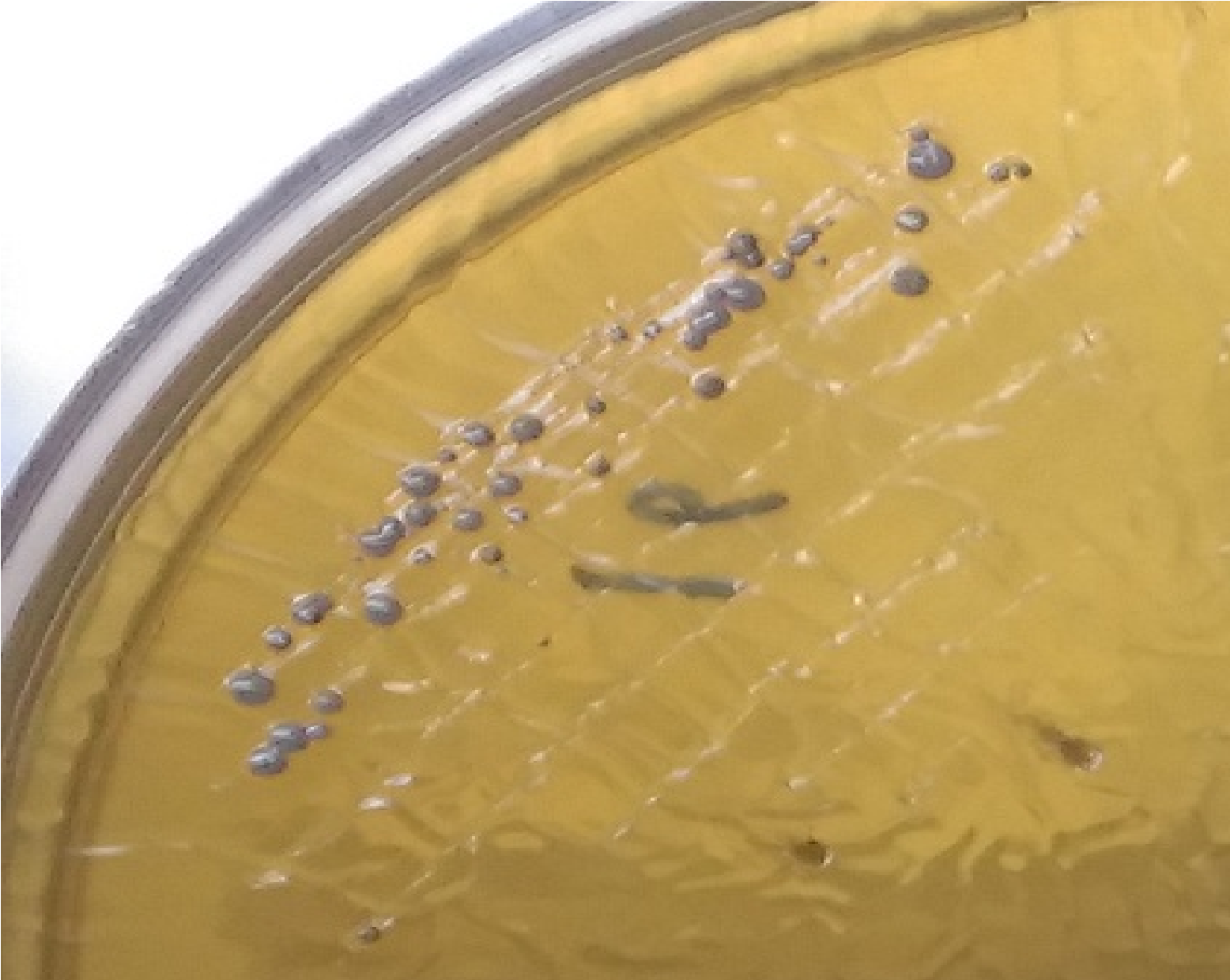 Bacterial Colony Morphology
Phenotypic Methods: Phenotypic method include all those examinations which do not include the genomic DNA or RNA. Classical or traditional phenotypic analyses are generally used to differentiate the bacterial group up to genus level and these phenotypic data constitute the basis for allocating taxa to a species. On the basis of biochemical, morphological and physiological features bacterial species have been classified in the phenotypic method. The bacterial colony were first classified on the morphology basis, the shape of the colony color, surface, opacity elevation, edges and all are considered for the morphological determination. Most of the times gram positive and the gram negative genus can be easily identified through the morphology of the colony and some of the bacterial group produces color which can be easily discriminated among others in a culture plate. Different staining methods like Gram staining, endospore stain, capsule stain and motility assay gives information of the cell shape and motility of the bacterial group.

The physiological characteristics involve the growth of bacteria in different temperature condition, different pH, different salt concentration and growth in aerobic and anaerobic condition, growth in presence of various substance like antibiotics. All these condition will group them according to the growth condition and that helps in categorizing them in the phylogeny. Growth at different temperature will group them in thermophile (hot environment), Psychrophilic species (cold environment) and Mesophilic sp. (normal environment) accordingly. The biochemical characterization generally characterize the bacterial group on the basis of protein and enzyme they produces and on several reactions they produces reaction byproducts which confirms the presence of that bacterial species. There are several other tests which are used to categorize the bacterial species in a particular taxa like determining the cell wall composition, this might be a tedious process but also proposes a rapid screening of a large population. Chemotaxonomy came into picture few years back and considered to be a milestone in the process of bacterial classification, as the information it gives can also alone give the classification of a bacterial species. The term “Chemotaxonomy” refers the chemical composition and its study for the classification and placing a bacterial species in its taxa. Cellular fatty acid present in the bacterial cell membrane vary in different species, a variety of lipids can be found in the membrane and on the basis of these lipids they can be classed into different groups. Phosphatidylethanolaminie (PE), phosphatidylcholine (PC), phosphatidylglycerol (PG), sphinogolipids and dimeric subunits of these and many more of these lipids can be found in the bacterial species. 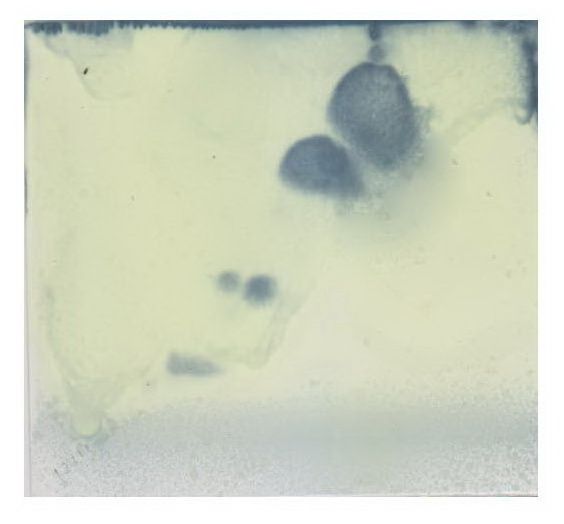 Polar Lipid Profile
Fatty Acid Methyl Ester (FAME) is also one of the chemotaxonomic method to differentiate between the bacterial species. The extracted cellular fatty acids are quantified through running them in the silica sheet and performing thin layer chromatography. 2 Dimensional run of these lipids shows the profile for the lipid, the figure shows the lipid profile. FAME is also a method to estimate the quantity of fatty acid present in the cell membrane and the extracted fatty acid was quantified through the Gas chromatography.

Isoprenoid quinones and Polyamines are also used to differentiate the bacterial population on the basis of their distribution in the cell membrane. Isoprenoid are generally involved in the electron transport chain, oxidative phosphorylation and active transport in the cell. Phylloquinone and menaquinone are the subgroup which used to differentiate the two bacterial species and they are quantified by HPLC. The role of the polyamines in the bacterial cell is not clearly known till now but can be used to differentiate between bacterial species, these polyamines are also been determined by the gas chromatography and high-performance liquid chromatography.

Evolution in the bacterial taxonomy

With all these advancements in the taxonomy method and the involvement of genome to the study not only evolved the whole procedure but also made it interesting for the coming generation. As this area was thought to be dull and boring, these advances has given it a new life and helps it in the evolution. Based on all these characteristics the phylogenetics of the new species can be made, which utilizes several algorithm to build a tree based on the rRNA sequence and also support the other characterization results. The phylogenetic tree shows the similarity index with the closely related subspecies and subfamilies. The whole process of the polyphasic taxonomy is a wide area and I have described it here in brief and some of the important techniques and methods for the characterization will be shared in future just keep reading them.

Images which are not sourced are taken by me and do not violates any copyright.

steemstem davinci-times microbiology science steemiteducation
4년 전 by micro2450
$0.42
10 votes
댓글 남기기 3
Authors get paid when people like you upvote their post.If you enjoyed what you read here, create your account today and start earning FREE STEEM!
STEEMKR.COM IS SPONSORED BY

The better one is Digital DNA-DNA hybridization only but its bit expensive as compared to the manual one, in digital we need to have the whole genome of all the species. Let's say you need to analyse among 3-4 closely related species than you need to sequence all the 4 species than only and its bit expensive. But the result form the digital hybridization can not be compared to the manual one as it is very accurate.
where as the manual hybridization needs the experiment in triplicates to give the real picture.
Thanks for the comment.