Human-muscle-powered Flight: Possible or a myth?

Well we all know the story of Icarus and Daedalus; for those who don’t, here’s a short review - Daedalus is a brilliant inventor—the Tesla of his day. Disastrously, he angers King Minos, the ruler of the island Crete, and he has to abscond out of there. With no hope left, he finally decides to fly out of there with his son using wings made up of wax. Daedalus warns his son to fly at a middle height: the seawater will dampen the wings and the sun will melt them. 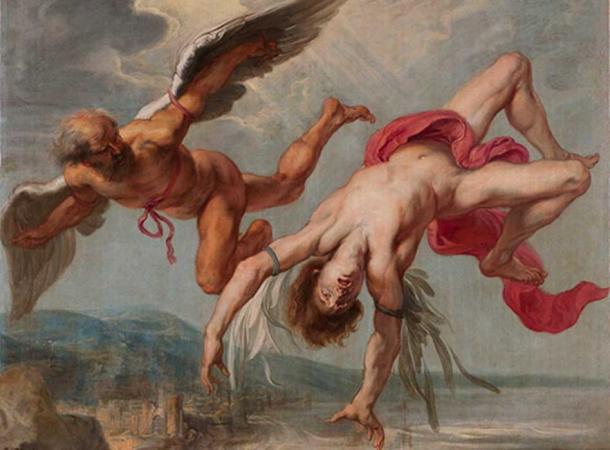 Icarus, overwhelmed with the joy of flying, forgets the warning and flies too close to the sun. Sure enough, his wings melt, and poor Icarus plummets into the sea and drowns. Frustrated for not being able to help his son and devastated at his death, he flies to Sicily, mourns for his son and built a temple in honor of the god Apollo.

As a child, the only part of the story that fascinated me was that they flew using an artificial wing made up of wax (which is probably the worst material for building wings), wow! That’s cool. I was also tempted to do so and I also built a prototype out of fabric and sticks (the only materials I could use without getting into troubles). Now I thank myself for not being dumb enough to jump off my roof top.

I was always curious about birds’ flight and spend hours watching them fly. Growing up, I learnt that the idea of human powered flight by flapping wings was a concept much older, dates back to about 1485; famous painter and inventor Leonardo da Vinci. He actually made designs of many man powered ornithopters (device that flies by flapping its wing) which are remarkably similar to modern day flyers. Moreover, his idea wasn’t a completely muscle powered flight, it was although powered by human muscles but was aided by mechanical means. At present, many man-armed-muscle-powered orinthopters have successfully flown but all of them use some form of mechanical system driven by muscle energy or other means. So the question still prevails, can we ever attain human-muscle-powered flight like a bird???

Before directly jumping into answering this question, let us first understand the essence of the problem.

At first, let us discuss how birds are able to fly. Birds have been evolved through millions of years through natural selection in a form that is compatible for flying. Following are some of the remarkable adaptations of the birds that allow them to fly:

Let us break it down.

The arms and chest of a human do not have anywhere near enough muscle mass to provide the necessary power for flight i.e. we have low strength to weight ratio, lower than that of a bird, even lower than that of a child ( I know the feeling :p ). This is because the rate at which we gain weight as we grow up is more than the rate at which our strength grows. This is the reason why a 6 years old boy can do more pull ups than his 40 years old father – he may be weak but his strength to weight ratio is still greater than his father’s.


We aren't too big to fly, neither are we too heavy to fly, the thing is that, we aren't strong enough to fly.

So, the gains we’ve made as an inspiration from birds has not easily been achieved. We have had poets write about it, we have had painters paint it, we have had singers sing of it. But then we have had Engineers and Scientists who have actually made it possible. Flight is now achievable by humans. Not as birds though but inside an aircraft. And of course there are the skydiving lunatics.
In reality, nature has its way to beat us, to amaze and inspire us. Our present day most advanced flying aircraft by far (‘by far’ isn’t just enough to describe it) cannot compete the level of sophistication, control, maneuverability and stability birds possess. But anyways, our story of flight is one of struggle and we need to appreciate nature for engineering what we are able to copy from.
Cheers!!!! If you made it this far.
Hope it was informative and you learned something new from this post.

steemstem science steemiteducation physics zoology
3년 전 by sahchandan49
$76.71
203 votes
댓글 남기기 8
Authors get paid when people like you upvote their post.If you enjoyed what you read here, create your account today and start earning FREE STEEM!
STEEMKR.COM IS SPONSORED BY

This is an awesome breakdown! I do think that with a lot of training we might be strong enough though? Say... enough training over severe generations to entirely re-engineer our skeletons for this exact purpose?

Thank you so much @tfcoates. Pardon me for replying late.
Yeah, we may grow stronger by training over several generations and our skeleton is rather strong to sustain aerodynamic loads, but not light enough. We aren't strong enough in the sense that we cannot produce enough power for flight, our respiratory system isn't efficient enough, neither do we have enough muscle mass in pectoralis to produce enough lift by flapping. The muscles present in our body should be redistributed. Our legs need to be less muscular but strong enough to sustain loads during takeoff and landing. In birds, the breast muscles weighs around a third of its body muscles, and technically, our chest muscles should weigh more than a third of our body weight. I may be wrong but It seems rather unlikely to happen even after several generations of training. I am really happy that you seem curious, Thank you again..... :)

haha, nope, that wont help. With increased muscle mass, your strength will increase but the rate of growth of strength is lower than that of growth of weight, so, your strength to weight ratio will decrease . :)
probably transplanting all your thigh muscle to your chest might help :p

Congratulations @sahchandan, this post is the third most rewarded post (based on pending payouts) in the last 12 hours written by a Newbie account holder (accounts that hold between 0.01 and 0.1 Mega Vests). The total number of posts by newbie account holders during this period was 5190 and the total pending payments to posts in this category was $4049.85. To see the full list of highest paid posts across all accounts categories, click here.

Thank you for the reward :)