On March 27, 1997, the author caught this view of Comet Hale-Bopp from Whitaker Peak north of Los Angeles with a Pentax K1000 film camera and 55mm f1.8 lens. The Great Andromeda Galaxy M31 is the diffuse spindle-shaped object half way between the comet and the lower right corner

21 years Comet Hale-Bopp arrived at perihelion (closest approach to sun) becoming the most widely seen comet in history. According to polling firm Mariposa Research an estimated 80% of the population of the US saw the comet. In several ways Comet Hale-Bopp was a remarkable comet, with one outstanding feature being its intrinsic brightness and size. It was quite possibly the intrinsically brightest comet to have ever entered the inner solar system, at least in the last 4-5 centuries, and remained visible to the naked eye for over a year (the previous record being 9 months).

It’s arrival at perihelion on March 30, 1997, was an unfavourable time of year to return as the comet always remained on the far side of the sun. This meant the comet remained more distant to us than the sun so it’s spectacle was very much diminished to what it could have been. Had it arrived at perihelion between 2-4 months earlier it would have become an immense object in the night sky. As it was it was still obvious to the naked eye from the city and quite impressive from a dark sky. 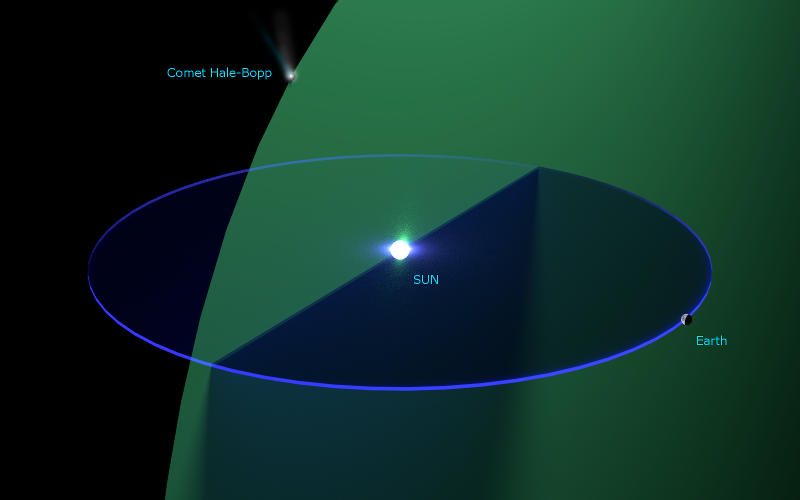 Comet Hale-Bopp’s orbit is shown here, with comet and earths position indicated for March 30, 1997, when the comet was at perihelion. Notice the relatively close approach of the earth and comet’s orbits, the comet had arrived 3 months earlier it would have been close to the earth and literally would of stretched from horizon to horizon, and the head would have been brighter than Venus. Generated in Blender 2.79

I was lucky enough to be travelling around the US at the time that Comet Hale-Bopp was brightest and watched the comet from discovery in July 1995 all the way through to 1999. Here is a compilation of my images of this marvellous comet.

During 1996, I was able to follow the comet with a rudimentary CCD camera I had designed and built the previous year. Here are some of the images I still have that I made with that camera. By November, 1996, the comet had disappeared from my latitudes and soon it was difficult to see even from the northern hemisphere. But when it re-emerged early the following year it was much brighter and now easy to see with the naked eye in the morning sky for northern hemisphere observers. It would be completely invisible from the southern hemisphere so I decided to book a 3 week trip to the US to coincide with it’s best display from the end of March through to mid-April.

Arriving in Los Angeles on March 27, 1997, I was keen to get out and see the comet that night, although ocean effect fog threaten viewing, so friends I was staying with drove above the fog to Whitaker Peak to get some great views. You can see one of the photos from that night at the start of this article.

For 3 weeks I lugged a telescope with equatorial mount, a 35mm camera and 4x5 camera around western United States! During the day I would travel and sight-see, at night I would observe and take photo’s, after which I would develop the 4x5 negatives. I believe I missed seeing the comet one night over the entire 3 weeks. I know I probably got overtired as one day I pulled over the side of the road to rest (It was somewhere on the way to Bryce National Park in Utah) when I fell asleep for almost the entire day in the car! Anyway, I think it was worth it the effort I put in those few weeks. 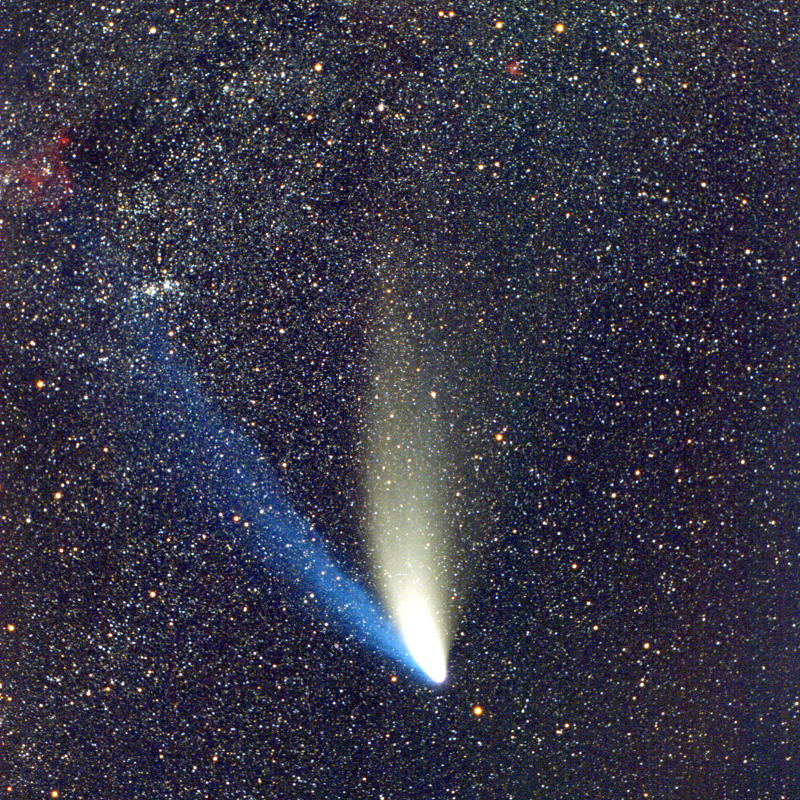 The best views I felt came from Idaho, when I scouted out a place at nearly 9000 feet (2600m) altitude near Galena Pass. During the day the sky appeared extremely clear, and you could tell this because the sky was a deep blue all the way to the sun. When I got up there at night, the sky and the comet were indeed superb. The comet hung still in the sky like a large ghostly apparition which at its lower end concentrated into bright almost starlike head. Here it is one of the photo’s from that night with the comet setting over the snowy landscape. Travelling back through Idaho, Washington State, Oregon, I managed to do a bit of sight seeing which included Crater Lake. This is a wonderful scenic spot and at the time was covered in very deep snow which I think added to the experience. This is a must see if your ever in the vicinity!

Spending a few nights in Yosemite, I was able to get some great views of the comet, but it was not totally without incident. Trying to find a location where I would not be interrupted by having people walk in front or into my cameras (there were comet watchers everywhere!) I found an out of the way location just to the south of the park. Just after the following image was made, I was asked to “clear out” after a suspicious ranger wondered what I was up to! Luckily, I’d got all my images. After April, 1997, the comet began its journey back to the outer solar system. It will not be back again for another 2500 years when it will hopefully wow another generation. I’ll leave with just one final image, which was made on May 9, 1997, when the still bright comet looked quite spectacular next to the crescent moon. 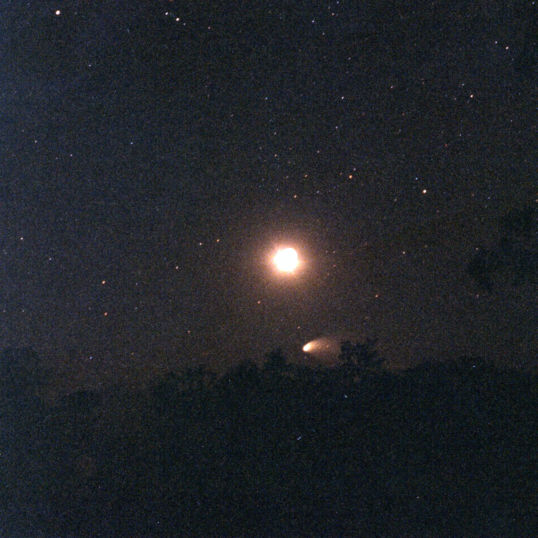 NOTE: All images are the authors, please feel free to use the images but please credit them to @terrylovejoy

steemstem astronomy teamaustralia longexposurephotography photography
2년 전 by terrylovejoy62
$25.29
194 votes
댓글 남기기 27
Authors get paid when people like you upvote their post.If you enjoyed what you read here, create your account today and start earning FREE STEEM!
STEEMKR.COM IS SPONSORED BY

Awesome photos Terry. Shame we couldn't see it from Aus. When's the next comet due? Any coming soon that you know of?

There are always faint comets around, but bright ones come around maybe once a decade. Most of the bright ones are unexpected, so one could be found tomorrow, we just don't know until they get found. Apart from that if you can wait until July 2061 there is Halley :) :)

I remember seeing that as a kid! I could make it to 2061. It's actually not that unrealistic. Plus my nan lived to 102, but my mum died at 53. Hmm, it could go either way if my lifespan is solely determined by the genes of the women in my family.

That's excellent, I hope you do get to see it! My grandmother saw it both in 1910 and 1986. The 1986 return was pretty unfavorable and it was never very bright, particularly when it moved back into the evening sky. The 2061 return will be much better. I am kind of hoping to make it myself but I'll be 95 then :(

Beautiful pics. At least I get to experience the comet vicariously!

Love how detailed your posts are.

Wow that would have been amazing to see that in real life!

Yes it was quite something, particularly away from the cities. It was also something to see crowds of people at places like Yosemite National Park at night getting views of the comet. Anyway, I managed to try to capture it in a sketch of how it looked by eye - although I'm afraid I'm not good a drawing - which is just below. One thing it reminded me of at the time (when looking by eye) is the appearance of hot glowing exhaust from a jet engine, although instead of focusing into a cone it fanned out - if that makes sense!? Very exciting captures @terrylovejoy You have a remarkable collection.

My goodness! These are some awesome shots of Hale-Bopp, especially the blue tails!

Thank you @stabilowl. I could see all the streamers in the blue tail in binoculars quite clearly, it was awesome, although I could never make out the blue colour.

Is there something similar we can hope to see during our lifetime if we don't intend to live for another 2500 years? I have seen the comment about Halley, is there maybe something as bright that we will be able t observe that isn't a comet?

Bright comets appear every 10 years or so, but there is nothing predicted atm. Check out my response to @choogirl

I have seen that reply, but I hoped you knew of some other bright celestial body that appears only occasionally which isn't a comment, as you have been discussing comets with choogirl :)

Well there are always the planets, Mars makes a close approach to earth this year and will become pretty bright in the sky (almost as bright as Venus).

Sadly, all I recall about the comet at that time was that cult with members that committed mass suicide. :-/ I missed something worth seeing. At that period of time, all I thought about was work.

Yes, its sad that happened. I think I was in transit at the time to US, and I know it was a big topic of conversation when I got there.

Amazing pics bro.. many things to learn from you.

Congratulations! This post has been upvoted from the communal account, @minnowsupport, by terrylovejoy from the Minnow Support Project. It's a witness project run by aggroed, ausbitbank, teamsteem, theprophet0, someguy123, neoxian, followbtcnews, and netuoso. The goal is to help Steemit grow by supporting Minnows. Please find us at the Peace, Abundance, and Liberty Network (PALnet) Discord Channel. It's a completely public and open space to all members of the Steemit community who voluntarily choose to be there.