This the third post on my series focusing on women in science, and I must say that each time I start researching who I'm going to write next I'm spoiled for choice. If only for my own personal growth I'm glad I've written this series to fully understand the vital importance women have had in scientific discovery throughout the ages, even during times and in places where their gender would have immediately disqualified them from formal education or recognition. So without further ado let's talk about Lise Meitner, the Austrian-Swedish physicist who defied so many odds to bring us nuclear fission.

Anyone else interested in contributing to this series,
please do so by using the tag #womeninscience

Lise Meitner was yet another scientific powerhouse to add to our series, this time a physicist who fought against the odds of being a women and a Jew in Nazi Germany, to continue her research into the discovery of nuclear fission. Lise contribution to the discovery was overlooked by the Nobel Prize panel and only her partner was awarded for the discovery, but her name lives on with element 109 Meitnerium.

Born in Austria in 1878 into a Jewish family, Lise went was private because women were not allowed to attend public schools at the time. Even at a young age, Meitner showed a disposition towards science, keeping a notebook full of experiments under her pillow at home. Following her passion Meitner completed her PhD in physics at the University of Vienna, becoming only the second woman to do so.

Working in the time of many of the physicists discovered the basis of what we now understand about atoms and the atomic world, Meitner had her fair share of running-ins with greatness. Her experiments with collimators and metal foil led to Ernest Rutherford's discovery of the atomic nucleus, she worked under Max Planck (of the infamous Planck's constant') and even Neils Bohr consulted with her regarding his work and it's findings.

But it was Meitner's own research and her commitment to it which earned her her place in the history books. It wasn't till 1917, at the age of 39 and with more than ten solid years of research under her belt that she was given her own lab and another nine years before she was granted the title of Professor of Physics. It was in 1935, now 57 years of age that Meitner and Otto Hahn began the transuranium research program, which eventually led to the discovery of nuclear fission. 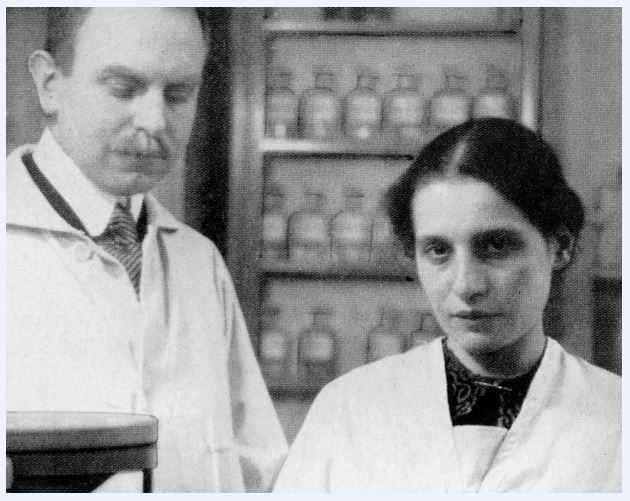 The transuranium research program, however, wasn't a smooth sailing project. In 1933 Hitler came to power, and Meitner was a Jewish woman acting as head of the physics department it the Kaiser Wilhelm Insitute. All around her Jewish colleagues were deported or forced to resign, but Meitner was partially protected by an Austrian citizenship. In 1938 with the assistance of Otto Hahn and others Meitner was finally forced to flee, crossing out of Germany with no possessions and very little hope.

It was with very little contact with her own lab that Meinter's greatest breakthrough came. While Hahn and his assistant performed the experiments that lead to the discovery of fission, it was during correspondence with Meitner that a theory on the mechanism behind this was developed. This was a significant finding in the world of physics as it tied together many 'loose ends'. For example, the production of energy by fission was described by Einsteins E=mc2 and it also explained why natural elements past uranium did not exist. In 1945 Otto Hahn was awarded the Nobel Prize in Chemistry for his work, but Meitner was famously snubbed. While not bitter over her colleague's recognition Meitner was not unaware of her own contributions to the project. In 1997 after the deliberations of the Nobel committee had become public Meitner's exclusion was summarised as "a mixture of disciplinary bias, political obtuseness, ignorance, and haste".

A Jew and a Survivor

While a Jew by heritage Meitner became a Protestant in 1908, a detail which didn't matter once Hitler came to power. Meitner lived through both WWI and WWII, and bore witness to many of the atrocities committed in the name of Trump, uh... I mean the Nazis. Meitner was torn morally between her obligation to stay in Germany and resist the Nazi party and flee, and while she eventually left the decision tormented her for years to come. She was vocally critical of native German scientists who stayed during the Holocaust. including Hahn, Heisenberg and von Laue.

While Meitner's relationship with Hanh was notably strained by his behaviour during WWII she remained publically admirable of him and good friends through to their later years. Even during WWI Meitner was ashamed of returning to Berlin to pursue her scientific career instead of serving as a nurse in the war. Her attitude and compassion was suitably summed up by her cousin Frisch who composed the inscription on her headstone which read

Lise Meitner: a physicist who never lost her humanity

*Thanks for reading team! As usual I hope everyone learned something new and had a good time. Stick around for more women in science, and as always feel free to contribute using the #womeninscience tag!

steemstem science physics people womeninscience
3년 전 by tfcoates55
$11.07
136 votes
댓글 남기기 6
Authors get paid when people like you upvote their post.If you enjoyed what you read here, create your account today and start earning FREE STEEM!
STEEMKR.COM IS SPONSORED BY

Being a former physicist, I have a somewhat biased list of female scientists in my head.
I would like to draw your attention to Laura Fermi. Yes, the wife of Enrico Fermi. She was not a physicist, yet I find her instrumental for his development.

Thanks for the tip! I'll look into her some more... the more research I do into this topic the more I'm astounded all the ways that female scientists managed to contribute to their fields, even in times when they were actively discouraged from doing so! Very inspirational!

Congratulations @tfcoates! You have completed some achievement on Steemit and have been rewarded with new badge(s) :

It's nice to read something about her.

And who knows, maybe someone would like to apply for a fellowship named in her honor ;)

That's pretty awesome, cool how these things live on!

It is a great idea to share these type of information and promote good female scientists from the past.

I think the majority of recognized scientists are males, and it is always wise to recognize both genders, besides, knowing these histories can encourage little girls into becoming a scientist themselves.

You're on cheetah and badcontent blacklists, your posts are just pragerised pictures. Stop destroying steem by cheating the system.

not a good reason for downvote if you happy with that i dont have an issue as all cheetah and badcontent followes did the same ,have a nice and lovely weekend mate