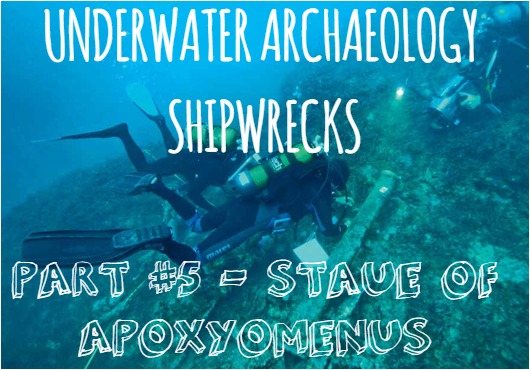 As got really good feedback on my series on underwater archaeology in the Croatian part of the Adriatic I decided to continue and showcase some more finds from the sea. The Adriatic sea is full of underwater shipwrecks and finds from the past archaeological sights from prehistory to the modern age can be found here. So far I have written a few posts on this subject and if you are interested in underwater finds from the past feel free to have a look. I covered a few modern wrecks from WWI and WWII. And the Underwater archaeology series started out with a 16th-century Venetian trade ship which ran aground near Mljet island in south Dalmatia.

Part #5 of my series will take us to the northern part of the Adriatic sea to Kvarner Gulf and the island of Lošinj. We will also take a big step back in history as the discovery of this site dates back to Antiquity. This is not a shipwreck per say but a single find on the seafloor which does not minimize its value as it is maybe one of the most important finds in Croatia and the entire Mediterranean.

The unique find was a bronze statue of a young Greek athlete the first life-size bronze statue found in Croatia. Preserved ancient bronze statues are a rarity in the world after Christianity spread through the Roman empire bronze statues were usually melted down for the precious metal. Statues of Roman Emperors made of marble or other stones were destroyed as they were personified as God which was contrary to Christian belief. There are a few statues made in bronze found in shipwrecks found in the south of Italy around the island of Sicily. 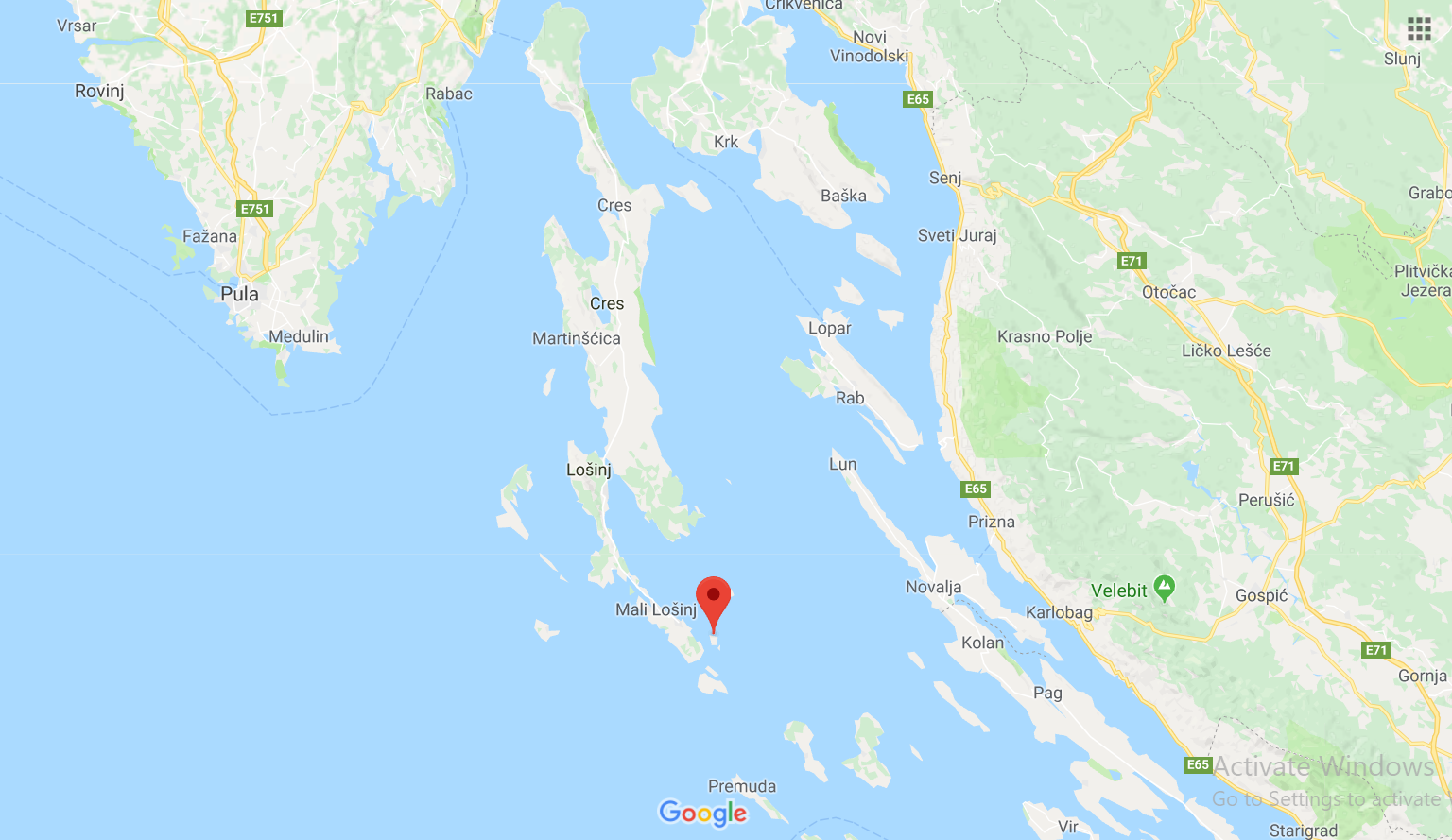 The bronze statue of a male athlete was found in the north Adriatic sea near the island Vele Orjule close to Lošinj island. The bronze statue is probably a copy from the 2nd or 1st century BC and was probably copied from the original dating back in the 4th century BC made by the Greek sculptor Lysippos known as Apoxyomenus or The Scraper. The bronze statue found in the Adriatic is known is known as the Croatian Apoxyomenus and is a life-size representation of a young Greek athlete cleaning himself from oil and dust with a scraper. In ancient times athletes during competitions would perform naked and daubed in olive oil. After competitions or exercise sessions before the athlete would wash it was common practice to scrape the oil, dust, and sweat off with a wooden or metal scrape tool. This tool is known as strigilus in Latin or stlengis in Greek and together with the small flask for keeping oil known as aryballos became symbolic tools of the athlete. Furthermore, the act of scraping the oil off the body known as apoxyesis was used as a favored scene to display athletes in ancient Greece.

The Croatian Apoxyomenus after restauration.

The statue was discovered in 1996 by Rene Wouters a Belgian tourist, sports diver and hobby photographer who discovered the statue by accident during one of his diving sessions. We are thankful to him as he reported his discovery in 1998 to the Croatian Ministry of Culture, usually, such finds are not reported and smaller objects are mostly taken as souvenirs. In 1999 under direct orders of the Ministry of Culture, the bronze statue was rescued with help of divers from the Archaeological Museum in Zadar and divers from Croatia's Special Police force. Rene Wouters the Belgian tourist was also present as a guest of honor during the rescue on the 27th of April 1999. 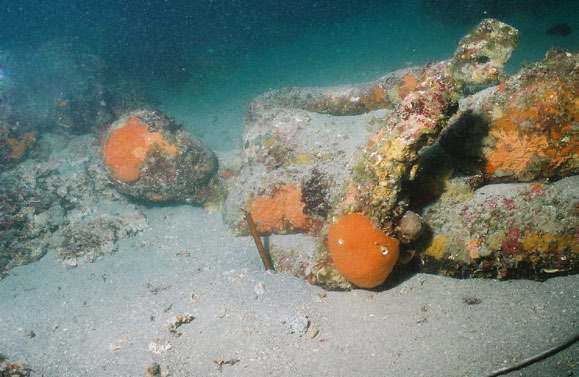 Footage of the statue on the seafloor.

The statue leid on the sandy seafloor at a depth of 45 meters wedged between two rocks and was halfway covered by sand.The front of the bronze statue was covered with a thick layer of incrustation which prevented further damage by galvanic action. The back side was covered by sand and was seriously damaged due to exposure to the elements. During the salvation of the statue, archaeologists discovered that the head was disconnected from the torso, further damage was found on the left shoulder and the right leg. The pinky on the left hand is missing like the eye inserts made of glass paste.

Signs of a shipwreck were not discovered and along the bronze statue, the only two things found at the bottom of the sea were parts of the bronze pedestal of the statue and a ship anchor dating to the same time period. The question occurs who and why only the statue ended on the seafloor. One possible explanation was that the ship was caught in a storm the anchor was torn off and to make the ship lighter the cargo was thrown overboard. The statue is probably cast in Greece by Greek sculptures as the analysis of the bronze shows a lesser amount of led then used in Roman times. The work on the statue also is associated with Greece as the holes from the cast were patched precisely. 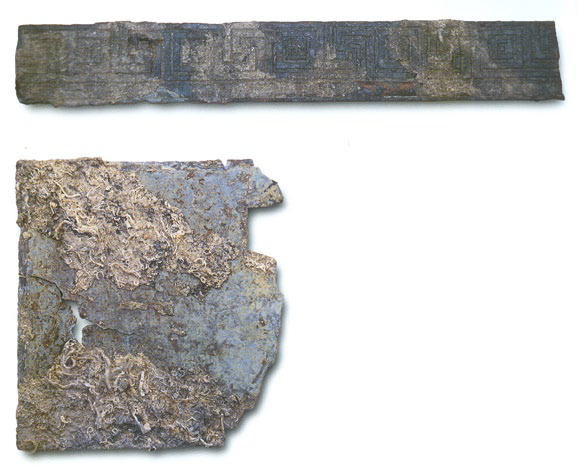 Parts of the original pedestal. There are eight known similar copies in existence in the world today they differ in size and the material there are made of. Various materials were used to make copies like marble, basalt, and bronze. None of the known counterparts of the Croatian Apoxyomenus have the scraper tool preserved. The most similar to the Croatian statute was found in 1896. in ancient Ephesus on the Ionian coast in Greece. This statue is standing in the Kunsthistoriche Museum in Vienna and is also cast in bronze like the one from Croatia.

The statue is oversized as it was standing on a high spot and viewed from the ground up, proportions needed to be adjusted. The statue has 192 cm (6 ft 3.5 in) in hight the head has 30 cm (11.7) and the pedestal it was standing on was 10 cm (3.9 in) high. The head fits 6 times in the hight of the body. By the size of the statue, calculations were made and the result was that it was about 20 - 25 % larger than the average male during antiquity. The bronze representation is the depiction of a young naked man around 20 - 25 years of age. Accentuated musculature with a gentle face, short and curly hair. The young man is shown in the so-called contrapposto position with the brunt of the body resting on his right leg.

As mentioned already the young man is probably shown cleaning himself after a competition or practice session. But it sets the question in what disciple of ancient sport did he compete in? Was he a runner, discus thrower or did he compete in pankration, wrestling, or boxing? To explain quickly what the discipline of Pankration is this was a form of combat and combined box and wrestling it was considered the toughest discipline in the Greek Olympics. It is known from the ancient literature that every athlete used oil on his body especially among wrestlers and boxers. One of the leading experts on Antiquity Dr. Nenad Cambi came to the conclusion after the analysis of the muscles and body of the statue that the young man was probably a wrestler. He supports his assumption with similarities found in the body shape of modern wrestlers. The statue of the young man has strong legs and an even stronger upper body with brought shoulders with highlighted upper arm and forearm muscles. It clearly shows the similarity with today's wrestler depending on strong upper body muscles and weight to overpower their opponent. Furthermore, the face is gentle with no deformations or damages which occur usually in boxers as boxing was performed bare-knuckle or with bandages with metal chains know as csestus example the Treme Boxer 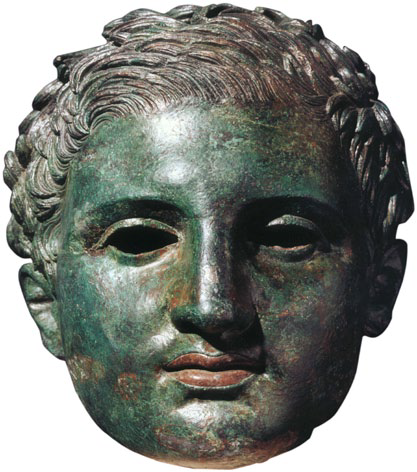 Photo above show the face of the Treme Boxer notice the face injurys Image source. The photo below showing the face od Apoxyomenus.

One of the most interesting finds was living inside of the statue when the statue was brought to Zagreb for restoration they found the nest of a small rodent mouse or rat in the left forearm of the statue. This could not happen easily as the statue was sealed shut. The scientist may found an explanation for the blind passenger. The statue did probably at one time fell over ripping off the pedestal leaving a hole in the right foot. The statue was probably not balanced right and over time the weight pulled it forward. The rodent lived for while inside the bronze statue as in the nest eaten nuts were found. The C14 radiocarbon analysis of the rodents nest did not give conclusive results the time period spread from the 1st century BC to the 2nd century AD. The statue before the desalinization bath.

The conservation and restoration work began during the 2000s in the Metal workshop of the Croatian Restauration Institute in Zagreb, Croatia. The process started with desalinization of the statue for a long period of time. This was necessary to get rid of Chloride. After de desalination bath the incrustation was removed mechanically which means by hand this took up a great amount of time and it took the restaurateurs around 3 years to remove the layers. Cracks were glued together with arametal resin. The statue cannot stand on its one that is why a support construction was used to stabilize and redistribute the weight.

The analysis of the statue concluded that it was cast in the lost wax technique. Seven separate pieces were cast head, torso, arms, legs, and genitalia and later put together.

If you have any questions please let me know in the comments below and don't forget to resteem :) steemstem curie thesteemengine history archaeology
3년 전 by zija202252
$1.08
31 votes
댓글 남기기 10
Authors get paid when people like you upvote their post.If you enjoyed what you read here, create your account today and start earning FREE STEEM!
STEEMKR.COM IS SPONSORED BY

Very interesting read.Just recently I watched a documentary about Apoxyomenus.

It is and a really important find to as there are not much of these statues around. Thanks for reading

As always, a pleasure to read. The most important thing is that his man parts were not destroyed by the galvan current :)

Hahaha @spalatino, yes there were intact and all good at the end.

pretty interesting article about scraping. I had read a lot of Greek and Roman accounts in the practice used by athletes and gladiators.
It would be a favorite piece of art done by the artists of the era.

Great article that is why you got good reception for it before,

Thank you very much @maverickinvictus for spending the time to read my post. I am glad you liked it :)

No @limabeing the photos are not mine need to put that in the post thanks for reminding me. No, i did not do the trip it was before my time so to say :) I am glad you like my post, it did not get much feedback :)

Yea there is a need for @geopolis but you must be patient!! For a long time my group #teamgirlpowa had no one using the tags.. now its full!! :)