TRAIN YOUR CHILDREN IN A RIGHT WAY 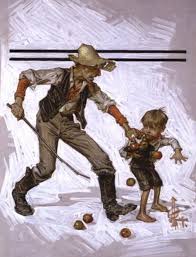 And after a warm night , its 6 am after stanley have prepared for school already waiting for mummy to provide food for breakfast , it was discovered that mummy have no money to get coffee and milk. stanley have no option than to leave for school with a demanding stomach. stanley reached school hoping to be fed with little snacks from school mates ,but to his surprice non could help his condition. stanley could not bear the hunger anymore , all he could do was to return home to check how he could bridge the gap, only to discover that no one is at home. even stanley's neighbors wasnt around at the moment. as a wise guy stanley personally decided to steal food from his neighbor. he did so because the shares same kitchen . stanley open his neigbors pot and discovered a piece of yam. He sustained his quest by taking the piece to a near by hideout and started to feed on the available resource. thats were he was taking the yam on the pics.

story writing fiction poetry stach
3년 전 by ozumba44
$2.11
6 votes
댓글 남기기 0
Authors get paid when people like you upvote their post.If you enjoyed what you read here, create your account today and start earning FREE STEEM!
STEEMKR.COM IS SPONSORED BY