Moving from NYC to San Diego - $ Check In and Succulents. Lots of succulents.

(Oh, god, I just realized my last post had only one terrible photo, so now its stuck in my feed as THE photo. UGH.)

Hope you all had a nice start to your week!

I thought I'd do a quick financial check-in since @boxcarblue suggested staying consistent in well, checking in with myself and my progress thus far. I've had three events this month to date, and none of them very successful. The first and second happened on the same day, so my artist-partner/collaborator held down one tent while I had the other. Neither of us had a lot of foot traffic (which was out of our control) and still managed a few sales each. Not too shabby considering other vendors had zero sales and left early. The third event was a last minute invitation I got from being at the first event, and it had an even worse turn out than the others. Again, I made a few sales while others had none and I guess I should consider myself lucky I didn't have to pay the $125 vendor fee otherwise I would have lost money. All in all - I did make a connection or two for future projects/collaborations and continue to get my name out there, but standing all day at an event for what amounts to less than minimum wage is not going to cut it. Even if I am doing better than that old 1 out of 100 sales motto, $50 bucks here and $100 bucks there still only adds up to not enough for rent. It's hard at this stage in the game for me to say NO to a free booth, but I've really got to find a way to better vet these events before I commit to anymore. (Says the girl who just signed a form agreeing to a three-day event in October for almost quadruple the fee....). In the meantime, I am continuing to come up with new product ideas and expand my network. I think I've got the silicone mold thing down now - that post will come tomorrow(ish) when I take apart my mold box! And since I have a little down time before my next event, I was finally able to get some much needed plant therapy in and spent the entire day yesterday cleaning up my succulent hoard.

Like this pot, not everything is turning out how I planned for, but I'm trying to go with it....So while I'm not feeling too anxious yet about the not making money situation, I'll share with you my growing obsession instead. I first noticed that one of my succulents was dropping leaves for no reason. 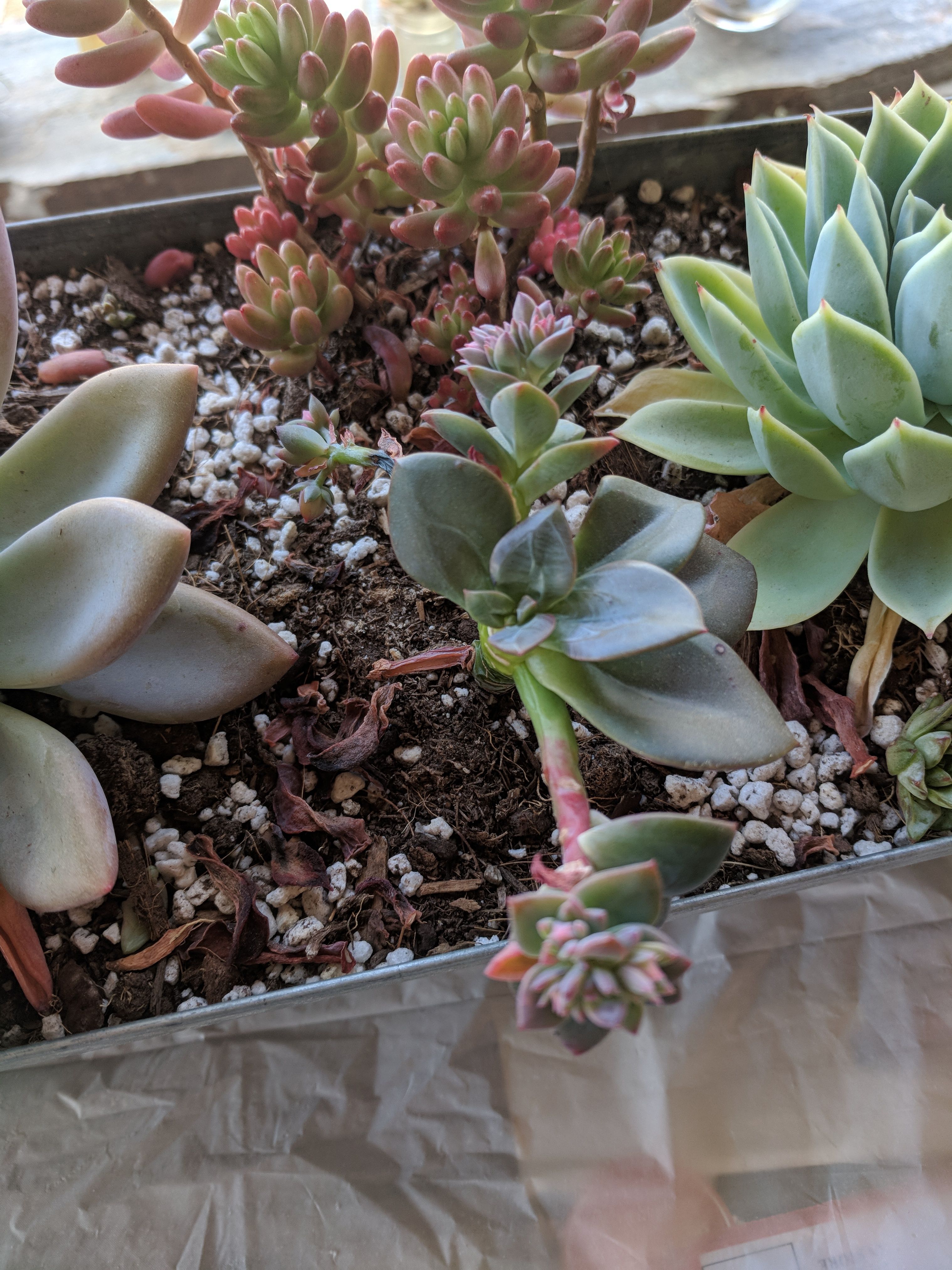 Upon further inspection, I discovered something had eaten a hole right into the side of the stem and basically hollowed the thing out. So I did what any other plant mom would do - take apart the planters until I found the worm or caterpillar before he got to anyone else. This is the "before" shot. Before I made a mess. 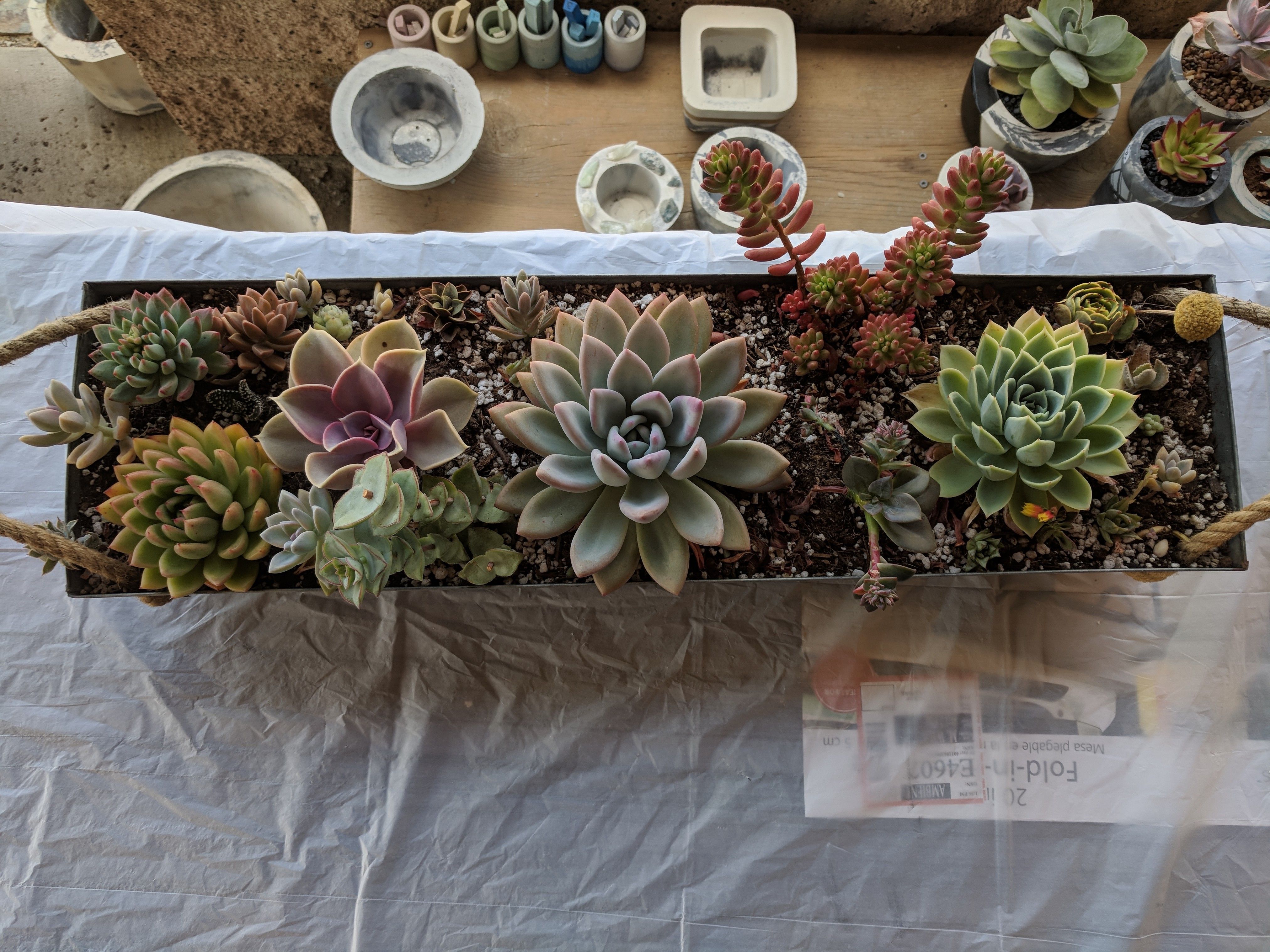 First, I tried to save the guy with the hole. He (She) has already given me a bunch of babies so I wont be too sad if it doesn't make it. I'll give him the best chance I can, though! I beheaded it, and then took off the bad leaves and bloom stalks. I propped the leftover piece over water, and hopefully I'll see some root growth in a week or so. 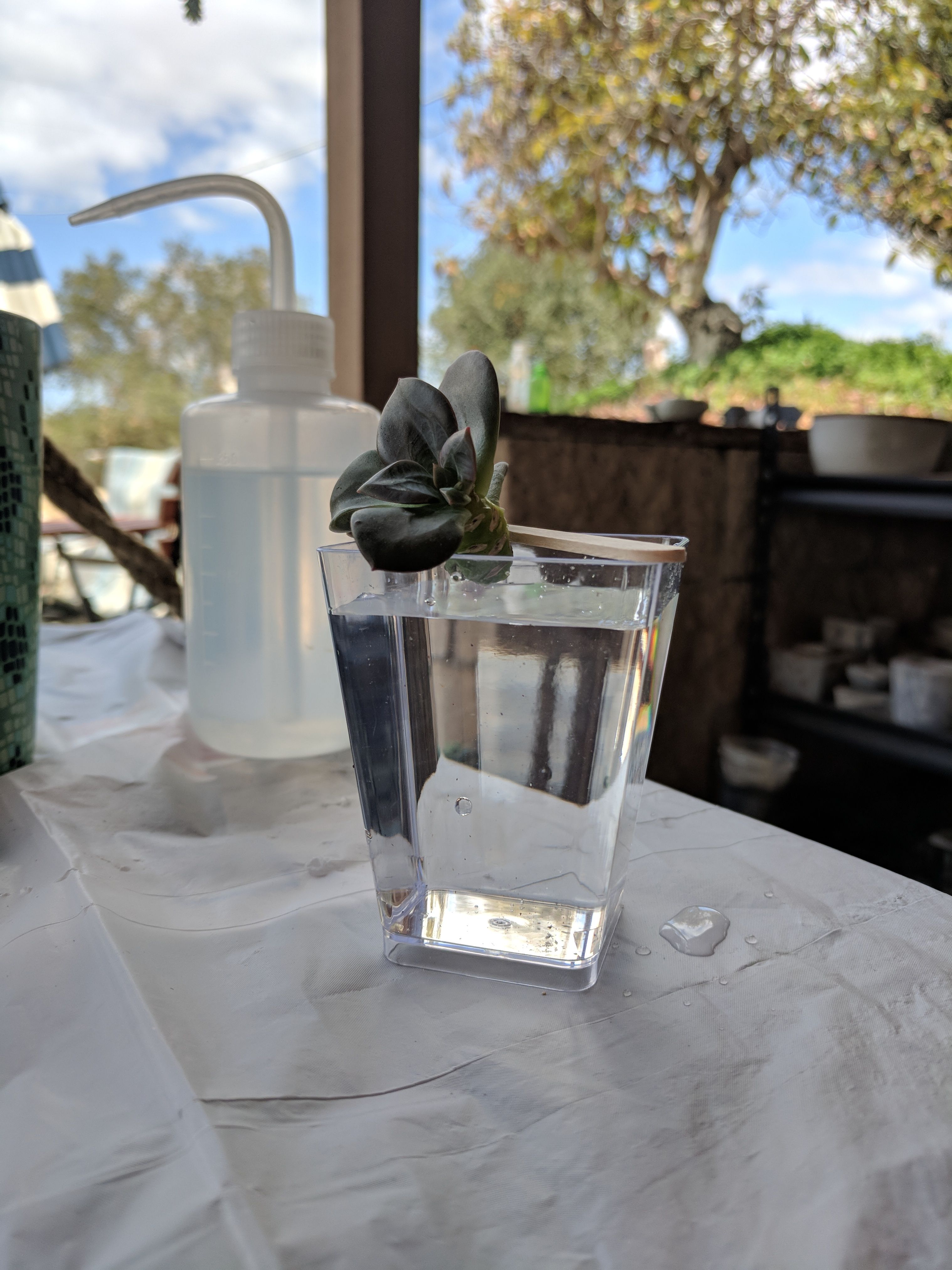 These guys have been hanging out in water for a little less than a month. Definitely time for planting! But not today. One of the best parts of repotting is finding new babies. This one was hiding way underneath the mother plant. 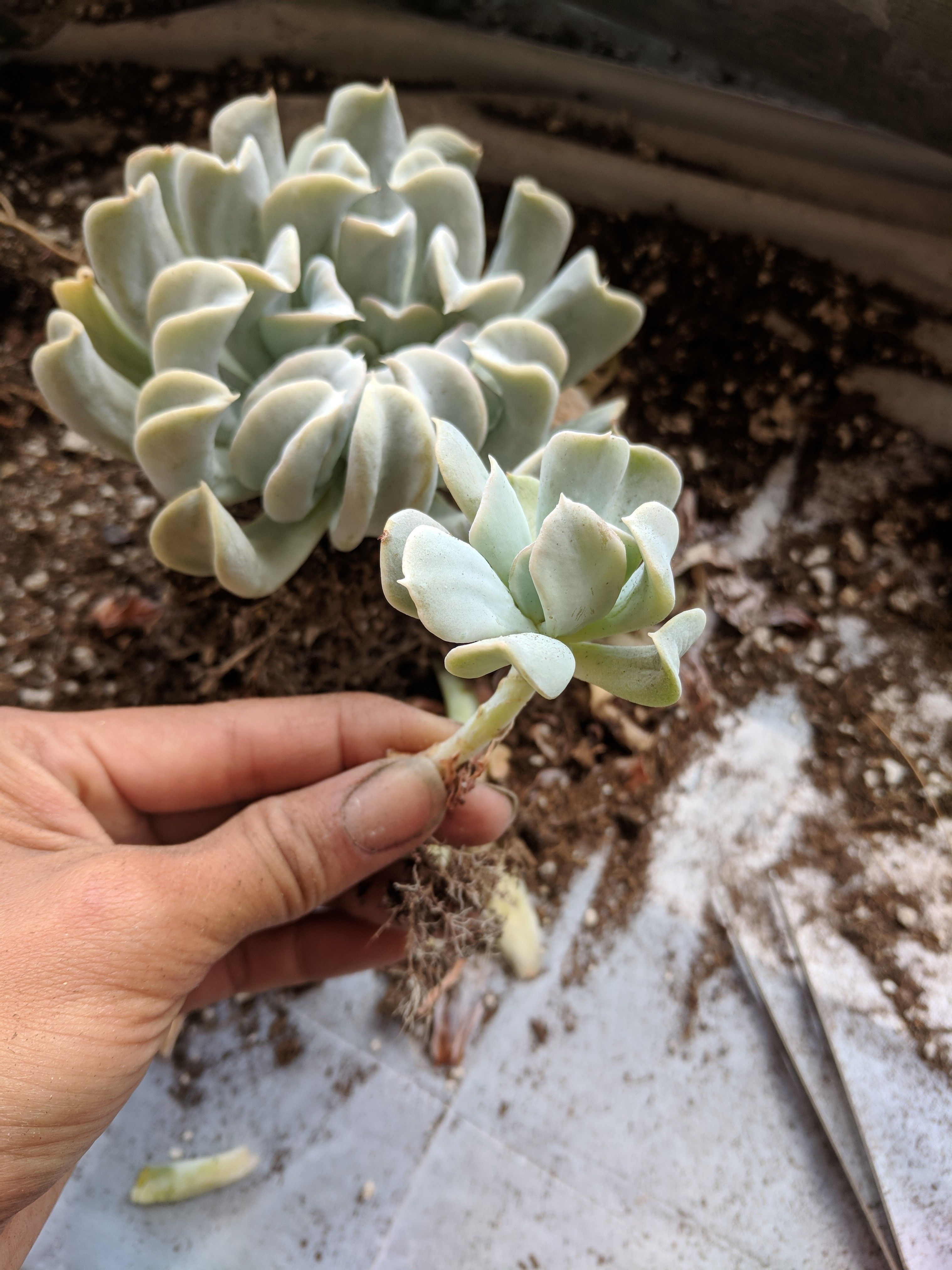 Which then lead me to uprooting most of the small succulents I have in various planters all over the backyard. They need more sun and the big guys have started blocking them. I never thought I'd have this overgrowth problem with succulents, especially after all the dead ones I left back in Brooklyn. 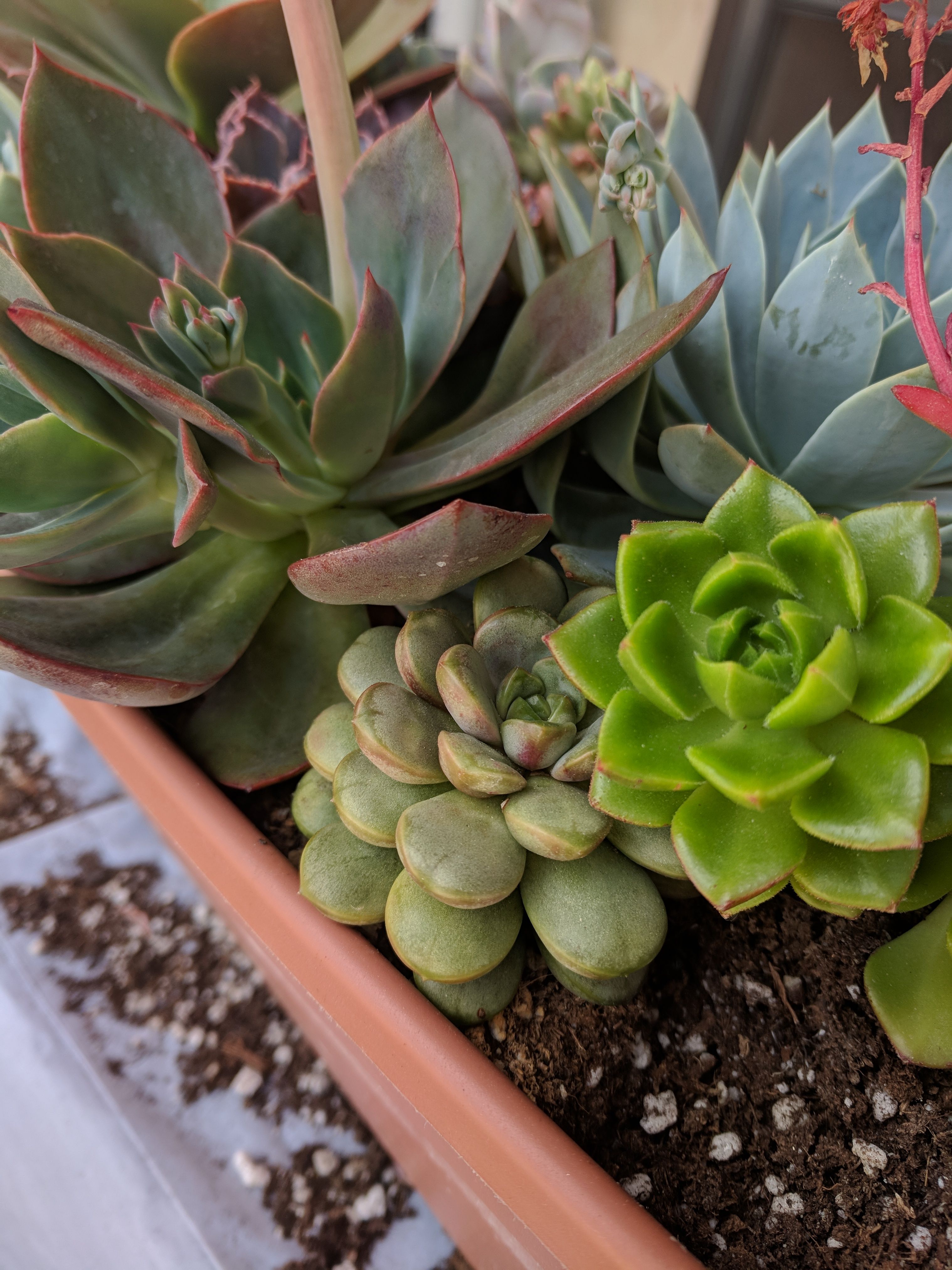 Somewhere around this point of hunting for babies, I remembered I still hadn't planned the loquat seeds with roots popping out. ADD on high, I threw those out onto the table ,too, because why not? I found more babies in the process! Which then reminded me my friend's wedding is coming up and I've got to make her some succulent crowns for the flower girls. I abandoned all the seeds and succulents to hunt down the floral tape I bought a few weeks ago....just to make sure I had it. 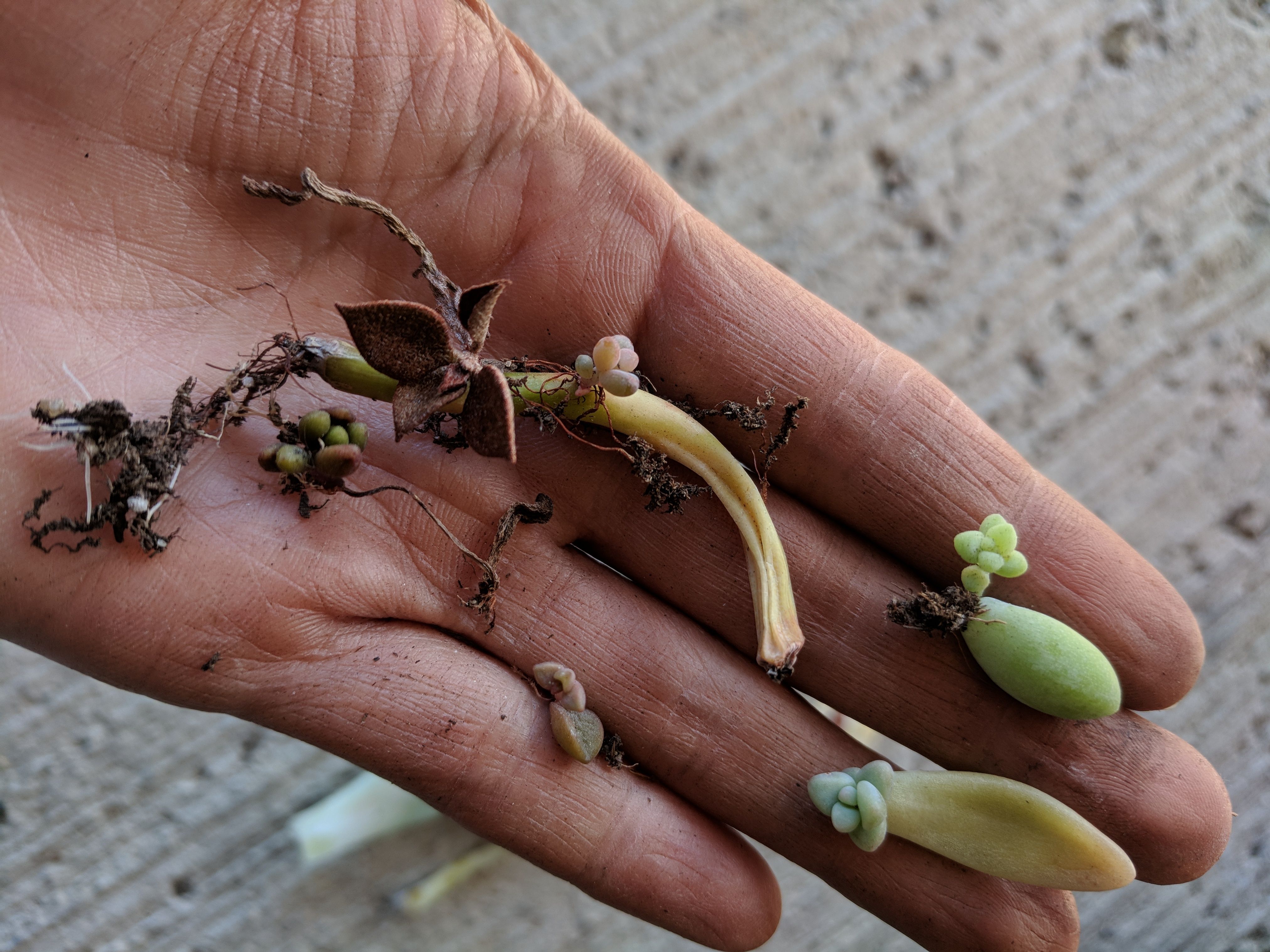 Then it was back to succulents. By the time I got everything replanted (two hanging planters, one large box planter and about a zillion individual pots) I forgot all about documenting the process and came inside with my box of babies, floral tape and a few other odds and ends I picked up in between bursts of planting and replanting. Oh, fun fact - did you know if you cut an earwig in half, both halves will keep walking? In the interest of keeping @steveeats as a dedicated reader to my blog, I'm going to spare you the video. (HA, who am I kidding. I spared myself the video. I have, however, almost gotten over my fear of earwigs outside. Not exaggerating, there had to be at least 100 in my planters yesterday. But only outside. I'm still afraid of them if they're inside the house. Totally irrational, but it is what it is. A fear. By nature, irrational.). And no motherfucking caterpillar! I literally just realized that I never found him as I am writing this. Son of a bitch. Good thing I sprinkled diatomaceous earth before I top-dressed [evil laugh]. 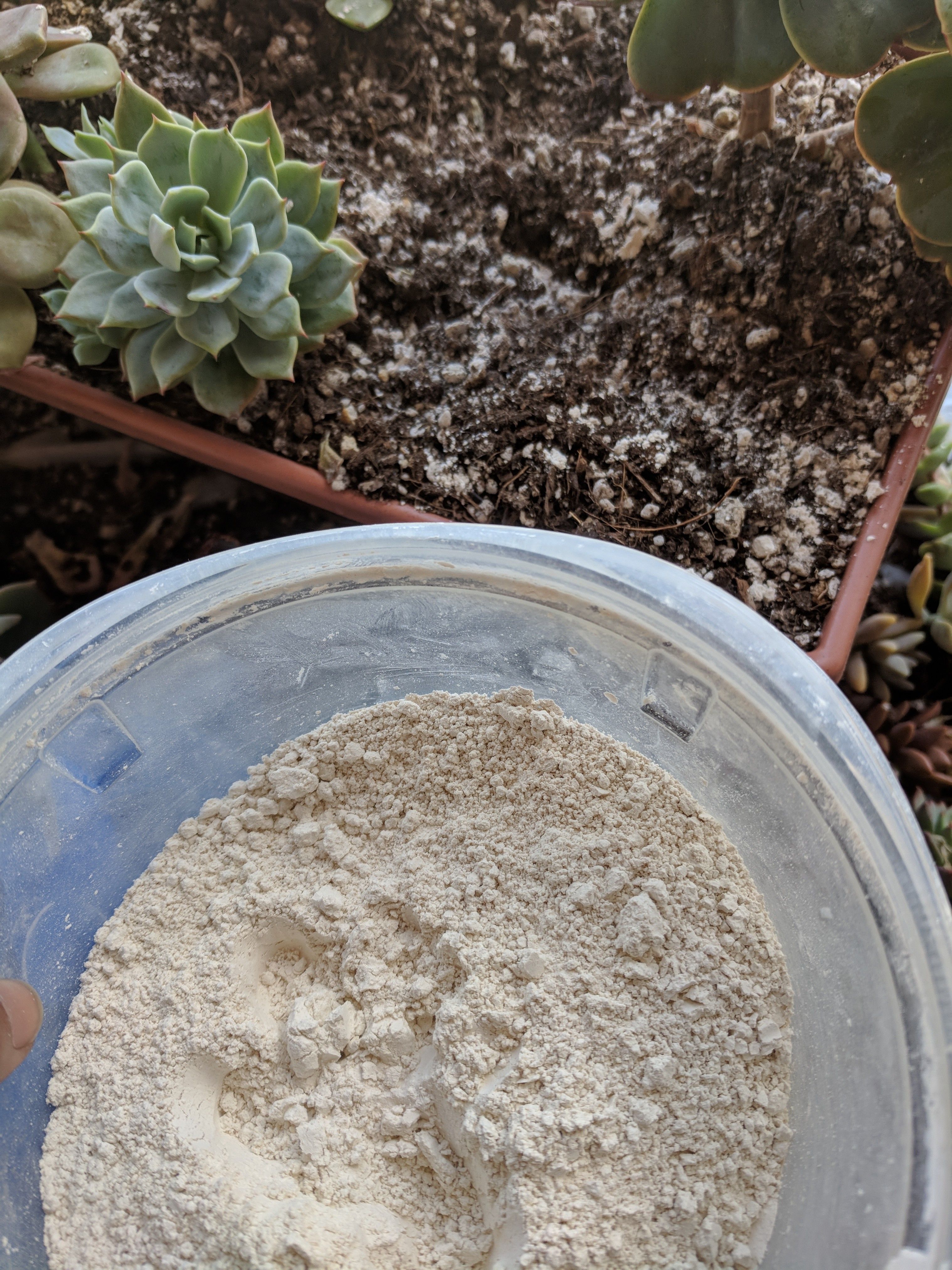 Oh yeah, the crown. This is my rough draft, with freebie succies from my overhaul. I'll have a more organized pallet of matching plants for the real thing. What do you think so far? 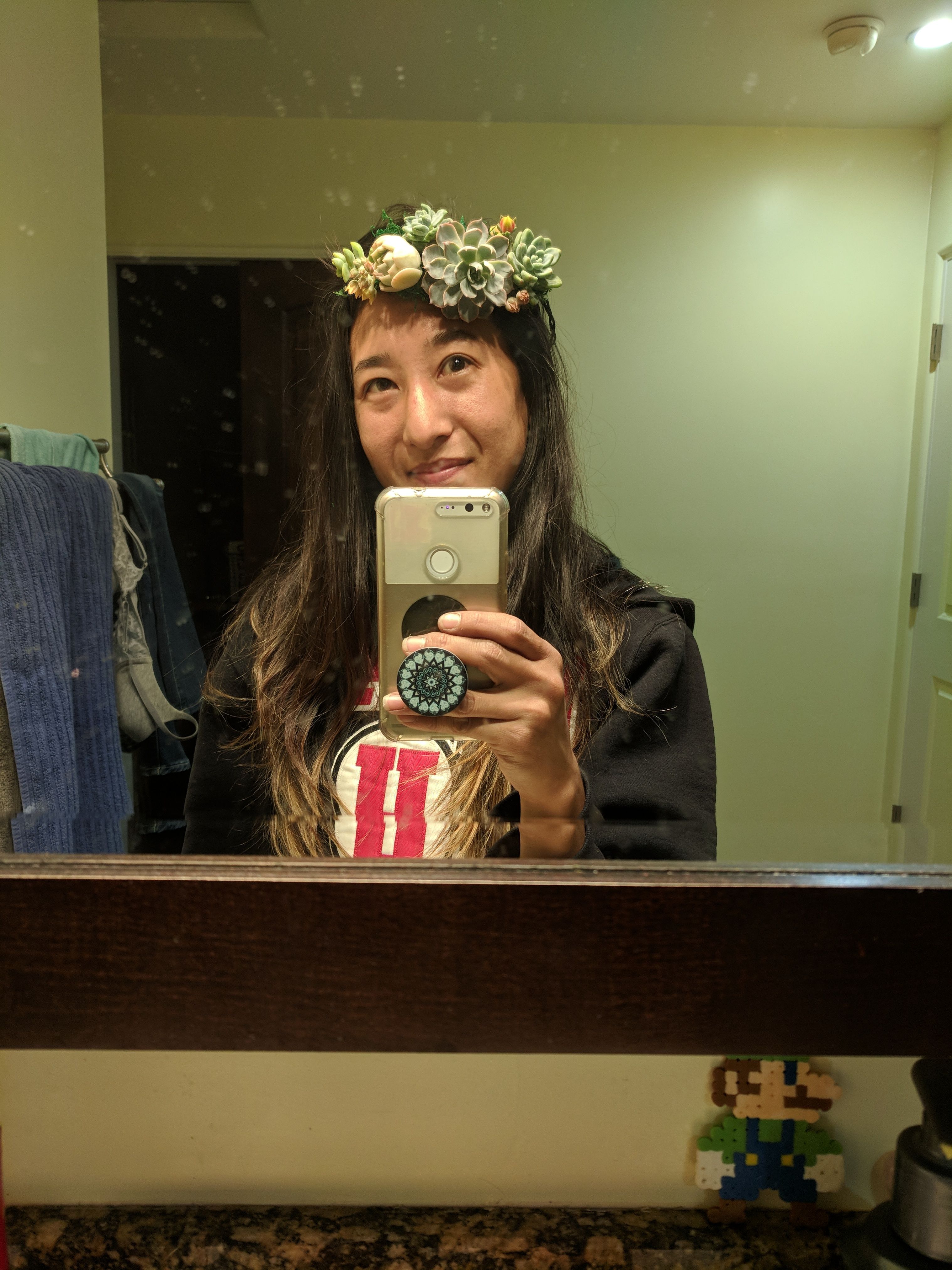 (of the succulent crown, not the dirty mirror!)

I better head to bed early - @freewritehouse has a selfie contest going on so I'm hoping a little beauty rest might help me out, LOL. Just one more succulent photo - for @nikv - my haworthia is pushing out babies like crazy! Not a rare one, but I do love the almost translucent look to them. succulents gardening photography entrepreneur socalsteemit
3년 전 by madpotters51
$2.90
43 votes
댓글 남기기 13
Authors get paid when people like you upvote their post.If you enjoyed what you read here, create your account today and start earning FREE STEEM!
STEEMKR.COM IS SPONSORED BY

Do you have a blog or active Instagram account where you can try to pump the shows that you’re setting up booths at?

Is there a regular farmer’s market that you could get a space in?

I promote on Instagram, where most of my business comes from. But my followers are from all over the country, not just San Diego so I really need to find shows that have great marketing on their own. I usually get a few people to come out each time but its not enough to sustain a living.

The problem with Farmers Markets is that they do require a weekly commitment, which I'm not willing to do until I know the event is worth it to begin with. They get a lot of foot traffic but as a lover of farmers markets myself, I don't go to shop. Its more the atmosphere and the food for me. And when people see the same vendors week over week, there leaves no urgency in purchasing anymore. Cement is heavy and a pain in the ass to set up and break down my display (Im always the last one to leave) but it would definitely help me get my name out there much quicker. I guess I should revisit the idea, even if I only do it for a month.

You chose a complicated medium, didn’t you? 😉

What do you think is the best way to make this venture profitable? Is it by selling individual pots, doing more wholesale type business, taking on community projects, doing workshops, etc?

I would eat all the pastries and bread if I were that type of vendor, LOL. That is the only thing I consistently spend money on at markets - FOOD.

At this point, I really can't say that any one path will make this whole thing profitable. It's going to have to be some combination of a few things, so I can't help but want to give each one a little try to see what fits best. I'm also trying my hand at a drop shipping store with some succulent products....

I think you’ll figure it out eventually.

Looks like you had great fun! I love dig-up-the-plants days and that haworthia looks great! A tip for the floral crown: keep some of those unrooted to create water stress and you should get more reds and pinks showing. As for the sucky finances, try and get into succulent shows that happen once or twice a year. The weekly market thing, as you observed, leads to no pressure to buy

The wedding isnt until June 14, and I still have to send it to NY for the actual wedding. Thankfully the bride is having all neutral/earthy tones and likes the shades of green :D I'm hoping I'll be able to just get a bunch of the same succulents and pick and choose which ones fit together. Just learned the youngest is only 3, so I need to pick some hearty guys! LOL

Do you ever try to do hybrids or splicing? Fascinated with what you do. Really cool pictures.

me personally, no. Im just happy to keep em alive! But I did go to the Dick Wright nursery yesterday - hes famous for being the first to hybridize echeverias a shit ton of years ago. I saw how they do it and picked up a brand new hybrid they created. So new, it doesnt have a name!!! If you're ever in North County, Ill take you on a succulent nursery tour :D The only way I know how to propagate at the moment is to pull a leaf off a plant and wait, or chop the head off and wait for a new head to grow back off the stump. Thank you!!!

Thanks for taking us into your succulent studio, earwigs and all! (Earwigs burrow and gnaw, wonder if they are the culprits rather than the unseen caterpillars?) I am glad you spared us the video because imo the only thing earwigs are good for is feeding chickens.

The crown is adorable. What a novel idea!

There are so many types of succulents, that translucent one mystifies me.

I dont think the earwigs eat into stems though. And it was just this one plant, none of the others showed any damage. The weird thing was that it had given me a baby plant that I put into a different pot and they both got eaten despite being surrounded by handfuls of other succulents. Seems like its just that species the caterpillars like.

I wonder if the larva was able to metamorphose and fly away before you apprehended it? We need Ace Ventura, insect detective!

Glad the plant was able to grow a baby!

hahaha yessss. I was thinking of getting some milkweed to encourage monarchs to stop by my yard but I don't know if they'd be an added pest or not.