Success story of a Slum Town boy who made 100K USD from online Teaching.

Today I am going to share a story of a successful boy from zero to hero which he shared on his blog,
He says that,
When I look back at the days in 2007 when I used to be a Biryani Seller at a bus stop in Baldia town Karachi who has never been a college or university, I feel like it’s a dream and I’m still imagining in the dream that someday, I’ll be doing something different. But luckily, it’s a fact now, the dream has already come true a few years ago, thanks to the internet & Google, but I have to share something special today. The reason I’m writing this post and publishing it on my blog is that I Have Made One Crore in One Year Just by Teaching Online in 2015. Below, you’ll read and watch how I made one crore in one year, and if you are also interested in the struggles behind this one crore story then do read the rest of the article. One Crore is in PKR 😀
How I made one crore in one year?
By saying teaching online, it simply means selling courses online. And Yes, I’ve made one crore in one year in 2015 by selling my courses on the internet to thousands of students around the world, I have students from United States to Canada, from Germany to the Netherlands and from Nepal to Nigeria. I have students from 172 countries who bought my courses in 2015. I used a few platforms to sale my courses in 2015 i.e Udemy.com, Skillshare.com, Skillfeed.com, Stackcommerce.com and YouTube.com.

I earned $50,000+ on Udemy.com in 2015 and also earned more than $13,000 on StackCommerce.com which is one of my favorite platforms for teaching online and making money with internet.

I also made more than $14,000 on Skillfeed.com which is no longer existing because that was closed in October 2015 by their respective owner. And I made a few thousand dollars with skillshare.com which is another platform for teaching online. And I also sold thousands of my courses in BULK. So combined it makes One Crore PKR in 2015
How I Struggled Throughout My Life?
I started working at the age of 8 in order to earn money for my family, I did not get a chance to properly go to school due to the family situation, in my family no one ever got complete school education, and so my case was also the same (But I always wanted to get education because when I looked at the kids of my age going to school every single day, I used to feel very sad). In the beginning, I started selling toys and shopping bags first in Peshawar and then in Lahore during 1995 to 1999. When I was 12 years old in 2000, we moved to Karachi, and I started selling vegetables and fruits on the streets of Orangi Town in Karachi. Then I became a Biryani seller at a bus stop in Baldia Town Karachi. For consecutive 6 years, I worked as a Biryani seller in Karachi from 2001 to 2007.

I always wanted to get an education, but I was never able to arrange it for me and no one helped me in getting education. Therefore, I used to buy Urdu News Papers every day when I was selling Biryani, and through that and some practice I was able to first learn new things.

In 2007 which was my last year as a Biryani seller, There was a shopkeeper who was my friend, and his shop located just behind my (Rerhi=vendor), I always used to tell him that I would be a person who’ll be working in an office and will be speaking English and visiting countries, but he always used to laugh and said, I’ll never be able to do it, and he used to discourage me that I’m a Biryani seller and will be forever. But my mind was always thinking something else which was looking for an opportunity.

How Life Got Changed After 2007?
In July 2007, I bought a mobile shop by borrowing money from some of my friends, for the first time I used computer in that mobile shop and learned the basics from different people including the one from whom I bought the computer. Asif Iqbal became the first person who taught me installing windows, removing the virus from a computer and other basic tasks i.e downloading, uploading and basics of the internet (Yahoo Messenger etc). 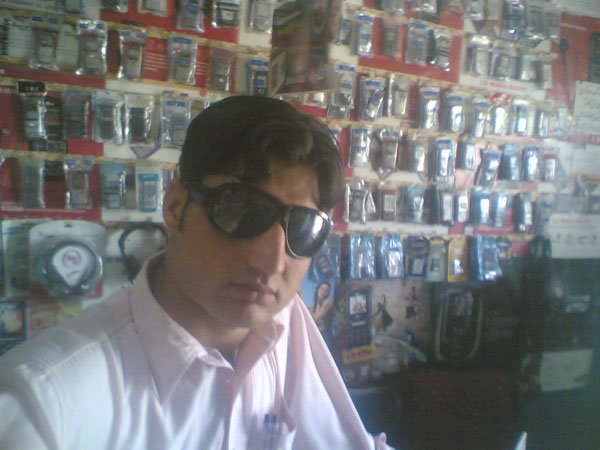 Now it was an opportunity for me in life to learn something and become something. So I never wanted to miss it. After learning the basics of computer, I went to a nearby area in Orangi Town #5 and took admission in the English language as well as C.I.T (Certificate in Information Technology).

Between 2008 to 2009, I sold and bought several mobile shops, and also earned a decent amount of money, because the mobile business was at its highest peak at that time. However, I once badly failed in that business, how? because when I sold my last mobile shop in 2009, I had some Rs80,0000 which I spent by going to Peshawar and some other places, and when I came back home, I had only a few thousand rupees left. I also had to take care of my wife and my daughter at that time.

The last few months of 2009 were the hardest ever months because I did not have a single rupee in my pocket to spend, I used to borrow Rs50 from one of the shopkeepers in our street to buy cigarettes and pay the bus fare. It lasted until December 2009 when I discovered how to make money on the internet.

What Happened After 2009?
During my Berozgari (Joblessness), I used to sit in one of my friend’s mobile shop, who was new to the field, so he always used to request me to sit with him, sometimes he used to go outside and I’d be sitting in his shop alone taking care of the operations. One day, I was checking the computer, and found a folder with the name “How to Make Money Online?”, I opened that and read all the 8 to 9 pages which were in Urdu, it was about Google Adsense. I read it again and again and just got excited, the next few days, I was thinking about this thing. I was worried, I was in hurry, I was in troubles.

A few days later, I was passing through the Mosque in our street, and one of my cricket friends met me there outside the mosque, he said what are you doing these days? I replied, I’m doing nothing, and told him that I can do any business if I have some investment. He offered me 1000$ for business, but he said the profit will be 50/50, I instantly agreed, and a few days later, I bought an Internet Cafe with that money.
The Turning Point of My Life
That Internet Cafe changed my life, I had an internet connection and the AKA Google, I used to search every day to learn something new, in February 2010, I officially started blogging by creating a blog on Blogger.com on the topic of Cricket because I had a lot of knowledge about it. After a month, I got an Adsense account approved for that blogspot. I sold the internet cafe in 2010 and left myself with Rs50,000 in debits. I moved to my home with an internet connection, after a few months in July 2010, I got my first earning from Adsense which was $117 and Rs9,933. Before getting that payment, I was still not believing on online earning, but now it was true, so I moved on. I worked really hard in that internet cafe, sometimes I did not sleep for 3 days, because I wanted to learn almost everything available online. I read thousands of articles during that time.

Next month, I got $136, another month I got a payment of $160 and finally, I reached to $1000 dollar a month with Google Adsense, I came out of debts and now started saving money. But I started investing most of the money in myself by taking English classes online and offline, because I knew, English is the most important thing in online earning as well as for communication with people. Furthermore, I started taking SEO classes from so-called GURUS in Karachi who were charging very high fees, but some good trainers were also there such as Sir Dilawar Ali. I continuously studied English for almost a year, and also did a few more computer courses i.e Graphic Designing, and Web Development etc. But continued my blogging with niche blogs on different topics such as Cricket and Pashto.

How I Became Popular on Internet?
Back in 2009/2010, my English was very weak, so I was always looking for information in Urdu on Google, but all the time I was disappointed with the result, because there were very few articles and videos in Urdu at that time. So I decided to start a website for Urdu users with video tutorials, but the problem was my weakness in English as well as other skills, so firstly I worked hard on improving my English and learning new computer courses, and then finally on 3rd December 2011 I registered www.onlineustaad.com and started publishing video tutorials on it in Urdu/Hindi. I blindly started creating video tutorials in Urdu on every topic I knew, I created complete courses on Photoshop, MS Office, Word, Excel, HTML, CSS, Blogger, SEO and whatever I knew at that time. And within a few months, my blog and my YouTube channel became the most popular in Pakistan as well as India, because people were eager to find the information I was sharing. I got huge respect from people, and also increased my earning. Over time, I improved my tutorials’ video and audio quality as well as the presentation skills.
How am I Consistent in Online Earning?
The reason I’m making money online without any break since 2010 is that I work and take care of my work every single day, I try to engage with people on daily basis. And the other reason is; I felt in the starting that Adsense is not a permanent way to make money online, so I had to make other plans for making money online consistently. Because you can’t put all eggs in one basket. Therefore, I discovered a lot of new ways to make money online, and today I even can’t find time to work on all of them, I need at least 100 hours in one day, because in these 24 hours I can’t do what I want. At the end of the day, this is a continue struggle, and I’ll have to struggle more in order to keep my earning updated. I’m eager to learn more and to share more.

What I Did with Online Earning?
When I was a Biryani Seller, I never thought of going outside Pakistan, but it was my dream though, so in last 4 years, I traveled different countries i.e Thailand, Singapore, Sri Lanka, Malaysia, UAE, USA and Qatar. I also bought a house for my family in Gulshan e Iqbal Karachi. I improved standard of life of everyone close to me and around me. I also spent money on getting online education which is my important asset in life. I helped many people with the money I earned online, and I’ll always be humble to them and to everyone else. I hope you will like his story and you will be learn alot from his story.
Thanks

sucess story online earning teaching
4년 전 by khurram31325
$0.03
4 votes
댓글 남기기 6
Authors get paid when people like you upvote their post.If you enjoyed what you read here, create your account today and start earning FREE STEEM!
STEEMKR.COM IS SPONSORED BY