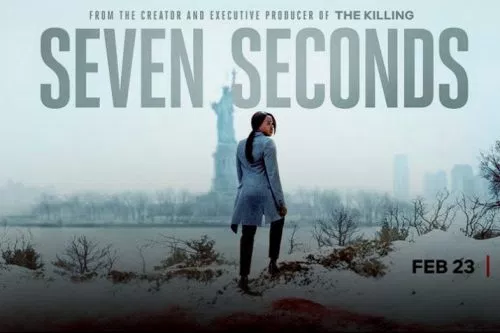 Seven Seconds tells the story of the death of an African-American teenager in a hit-and-run accident in Jersey City and the investigation that follows. Brenton Butler is struck by a car in a deserted park on the shore of the Hudson River, New Jersey, in episode one. What follows is a gritty and compelling drama series based around the subsequent investigation of his death and the alleged cover-up that takes place to protect the perpetrators.

When I say if you like to "The Killing" you’ll probably like this series I’m not kidding. It is exactly the same story! On one level this is unsurprising as the creator of this series, and its executive producer, were also behind the wildly successful four season drama series produced by Fox Studios. Seven Seconds takes formula television to a new level however.

We have two parallel story lines being explored with the first being the investigation of the death of a teenager in suspicious circumstances by an unlikely and dysfunctional investigative duo, and the second examining the breakdown of the family of the victim, who are torn apart by the grief that overwhelms them. It is literally the same story. That said, Seven Seconds still manages to make compelling viewing for anyone who likes this style of police investigative drama.

I’ll be upfront and state that I really enjoyed this series. It is truly binge worthy entertainment and I consumed in the entire 10 episodes over a period of approximately three days. The storyline is compelling, and each episode rolls smoothly into the next, making it difficult to press pause. It’s not perfect, and if I’m being honest there are some fairly significant weak points, however overall, I thought the show was great.

One of the main weaknesses of the series is the acting some of the key characters. Nowhere is this better exemplified than the portrayal of the alleged perpetrator of the hit-and-run, Peter Jablonski, by actor Beau Knapp. Knapp spends the majority of the 10 part series stalking around the screen with a brooding and moody expression on his face. While I believe this is intended to convey his character's internal struggle coming to terms with the crime that he has committed, and also a troubled past, the effect is more akin to a sulking 15 year old boy whose mother has confiscated his iPad . He also adopts an awkward and stalking gait for his character for the entirety of the series, which I assume is meant to reinforce the internal conflict that the Jablonski is enduring. In reality though, it simply makes him look like he is suffering from lower back pain. As Jablonski is one of the central characters of the series, Knapp’s performance is a real let down.

Knapp is not alone in providing a substandard performance as a multitude of the other members of the cast struggle to adequately address their roles. The performance of Russell Hornsby as Isiah Butler, the father of the deceased child, feels wooden for the most part. Compared to Brent Sexton's performance in the same role in "The Killing," Hornsby come up well short of the mark. Regina King, playing Latrice Butler, his wife, equally struggles to convey the powerful emotions of a mother who has lost her only child. While these two actors redeem themselves somewhat in the second half of the series with more compelling performances, overall I found this aspect of the storyline largely unengaging. There is also definitely an element of poor script writing at play here. Even the best actor can only work with the material that they are given by the script writers, and there are several points in the series where it is obvious that the script does not live up to the aspirations of the production.

The second and probably more significant area where I feel this drama falls short of the mark is in its treatment of race relations and social injustices suffered by black communities in the United States. The victim, Brenton Butler, is a young black man. The alleged perpetrator, Peter Jablonski, is a white cop. The issue of race relations looms large over the entire series and was clearly intended to be a significant element that this drama was seeking to address. At no point does the show really do justice to such a significant issue. Racial tensions are in reality just used as a plot thickener and not addressed in any meaningful or sensitive fashion. Some of the points that the drama raises are certainly thought-provoking, and undoubtedly relevant, but they are addressed in such a way that they form little more than a backdrop to the storyline, rather than something which this drama asks the viewer to examine in a meaningful way. The story would be equally compelling had the victim been a white boy and the issue of race not been raised. To attempt to draw in such a significant and contemporary issue, and then treat it so superficially really detracts from what is otherwise an excellent drama series.

When you review the Twitter feed for the series and the promotional material that was produced when it was first released, its clear that the issue of race relations and social justice were intended to be a significant element of the story that Seven Seconds is trying to tell. The way in which it is delivered however makes this issue seem more of a marketing ploy to draw the viewers in, rather than a serious attempt by the producers to examine this issue in a way that contributors to this ongoing conversation.

Potentially one reason why Seven Seconds handles this issue so poorly is that in my opinion, the producers try to cover too much ground for a 10 episode series. At times, there are so many different story lines going on and so many themes being explored that it becomes distracting. The series covers the investigation of the hit and run, the accompany breakdown of the victims family, police corruption and brutality, the treatment of African Americans in the US criminal justice system, the treatment of veterans by the US government on their return from active service, the problem of gang related activity and its effects on black communities, the struggles of a devoutly Christian Family to reconcile the death of their child with their faith, issues relating to homosexuality and homophobia, the impact that childhood abuse can have on a persons subsequent adult life, the Islamification of black communities, the role of elected officials in shaping the outcomes of the criminal justice systems....the list goes on for far too long. Potentially if the producers had tightened up the story line and eliminated some of the multitude of themes they attempted to address, then more space would have been created to adequately deal with the issues at the heart of this series.

The above notwithstanding, I still found Seven Seconds great viewing. The story line is rescued by Michael Mosley, who plays Joe Rinaldi, one half of the dysfunctional investigative team tasked with uncovering the truth behind Brenton Butler’s death. Rinaldi is a middle-aged cop with some skeletons in his closet and a failed marriage to his name. Mosley, who you may recognise from his recent performance in another Netflix drama series, “Ozarks,” delivers the performance perfectly and is at times hilarious to watch. His ability to bring humour to such a dark subject matter, without detracting from the significance of the issues being dealt with is truly impressive. Several other actors including Raul Costillo, who plays one of the cops involved in the cover-up and Zachary Momoh, who plays the deceased boy’s uncle, are also compelling.

At its heart however, what makes this series successful is it has a great storyline. Despite being a clear rip-off of another studio’s production, Seven Seconds manages to bring enough new material to the table to make this compelling viewing. The drama is unrelenting from the first 30 seconds to the last, and each episode rolls seamlessly into the next. There are several plot twists in the second half of the series that keep the viewer engaged, and there are enough unanswered questions at the end of the final episode, that the door is left open for a second season in the future.

Overall, I can thoroughly recommend this television show to anyone who enjoys criminal investigative dramas. If you have particularly strong views around issues of race and social justice in the contemporary United States, you may find certain elements of the plot unsatisfactory. Beyond this however the story has a lot going for it. I thoroughly enjoyed watching it and am hopeful that there may be a season to in the offing early next year.

I would give this television series 3 ½ out of 5 stars.

teamaustralia steemit blog tv netflix
3년 전 by aghunter61
$16.39
67 votes
댓글 남기기 12
Authors get paid when people like you upvote their post.If you enjoyed what you read here, create your account today and start earning FREE STEEM!
STEEMKR.COM IS SPONSORED BY

Wow! You really put a lot into this post and I appreciate it, thank you. I am a Netflix junkie and I will typically binge watch something that catches my attention for at least one full episode. I hate when the acting is subpar and you have to try really hard to buy into the character. . .ugggggg! Anyway, I love the full insights you gave in your post and I know more about this show than I had previously and I am headed to Netflix in a few minutes to watch episode one! :-)

You just received a Tier 0 upvote! Looking for bigger rewards? Click here and learn how easy it is to get them or visit us on Discord
$0.00
댓글 남기기
[-]
shadow3scalpel61  ·  3년 전

Beep!Beep! @shadow3scalpel & listkeeper @chairborne have your six new veterans, retirees and military members on STEEM. We’ll be patrolling by to upvote your posts (because you are on the list) and we'll answer any questions you leave us. Comment by @shadowspub. This is a opt-in bot.

Good to see somebody do some film/series reviews. I might give this one a miss though.

Btw nice to see you back posting (was wondering what happened to you!).

Hey hey! Welcome back - where you been @aghunter? Haven't seen a post from you in ages

Good post. This is what i wanted from netflix

I love Netflix and this review is very comprehensive. I really think I may check it out after I finish watching Drop Dead Diva LOL. This write up is very thorough, thanks for sharing your opinion!
Ivy

Congratulations @aghunter! You have completed some achievement on Steemit and have been rewarded with new badge(s) :

Congratulations @aghunter! You have completed some achievement on Steemit and have been rewarded with new badge(s) :

I've just finished a binge-watching 'Troy' after giving 'Lost in Space' a go. Love to hear your thoughts :-D