Then you have never heard of the surveyor and road builder who, with a team of eight dedicated assistants (basically bulldozer drivers, mechanics and a cook), in the 1940s and 1950s built more than 6,500 kilometres of roads which opened up the Australian inland – let’s call that Australian desert.

It was Beadell who headed the “gunbarrel crew” which built that extraordinary track, the Gunbarrel Highway, from Victory Downs (just west of the Stuart Highway on the South Australia-Northern Territory border) across to Carnegie in Western Australia.
It was also Beadell and his crew who constructed the Anne Beadell Highway (these were access roads across sand dunes and deserts rather than sealed highways) from Mabel Creek Station (west of Coober Pedy) across to Laverton.

Beadell was proud of his work and he left small aluminium plates along the way to ensure that the drivers who followed didn’t get lost. Each plate was stamped with the latitude and longitude and frighteningly, the distance to the next waterhole or station.

The actual construction makes fascinating reading:
“The typical modus operandi was for Beadell to carry out forward reconnaissance in his Land-Rover by himself and on the basis of this, decide the best route for the road. He would then return to the rest of the group from which the bulldozer would lead off first with its driver guided by Beadell flashing a mirror (sometimes a flare was used) from the top of the Rover. The rough track was then smoothed with an ordinary road grader.”

Remarkably the roads are still there nearly seventy years later and they still present a challenge to adventurous 4WD enthusiasts wanting to cross Australia’s Dead Heart.

It is entirely appropriate that one rocky outcrop in the middle of nowhere, along the Gunbarrel Highway, is named Mount Beadell.
On it is a memorial which tells the story of this remarkable man.

“Len Beadell (1923-1995) was born on a farm in West Pennant Hills (now a suburb of Sydney) in 1923. After taking an interest in surveying at the age of 12, under the guidance of his surveyor-Scout master, he began a career with him on the military mapping program of northern NSW in the early stages of the Second World War. A year later he enlisted in the Australian Army Survey Corps serving in New Guinea until 1945.

“While still in the army he accompanied the first combined scientific expedition of the CSIRO into the Alligator River country of Arnhem Land carrying out astronomical observations fixing locations of their new discoveries.

“Waiving his discharge for yet another term he readily agreed to carry out the initial survey for a rocket range later to be named Woomera. This decision led to a lifetime association with that project as a civilian till his retirement in 1988.

“After 41 years including continual camping, surveying, exploring and road making – he opened up for the first time in history over 2.5 million kilometres of the Great Sandy, Gibson and Great Victoria deserts.

“He discovered the site for the succeeding Atomic test at Maralinga also laying out all the instruments needed to record the results.

“In 1958 as range Reconnaissance Officer at the Weapons research establishment he was awarded the British Empire Medal for his work in building the famous Gun Barrel Highway, the first and still the only 1500 km link east-west across the centre of Australia.

“Since then he has surveyed over 6,000 km of lonely roads in the deserts for access in establishing instrumentation for the Woomera and Maralinga trials.”

Beadell wrote a number of books, amusingly most of them have “bush’ in the title, (Beating About the Bush, Still in the Bush, Too Long in the Bush, Blast the Bush, Bush Bashers) rich in anecdotes and stories about his adventures and they are still in print.

There is also an excellent account of his life, complete with lots of photos and a map of all the roads he built, titled Len Beadell’s Legacy by Ian Bayly.

Following on from this amazing story, my Wife, Daughter and I were lucky enough to spend some time "out bush" with Len back in the early 1990's before he died. 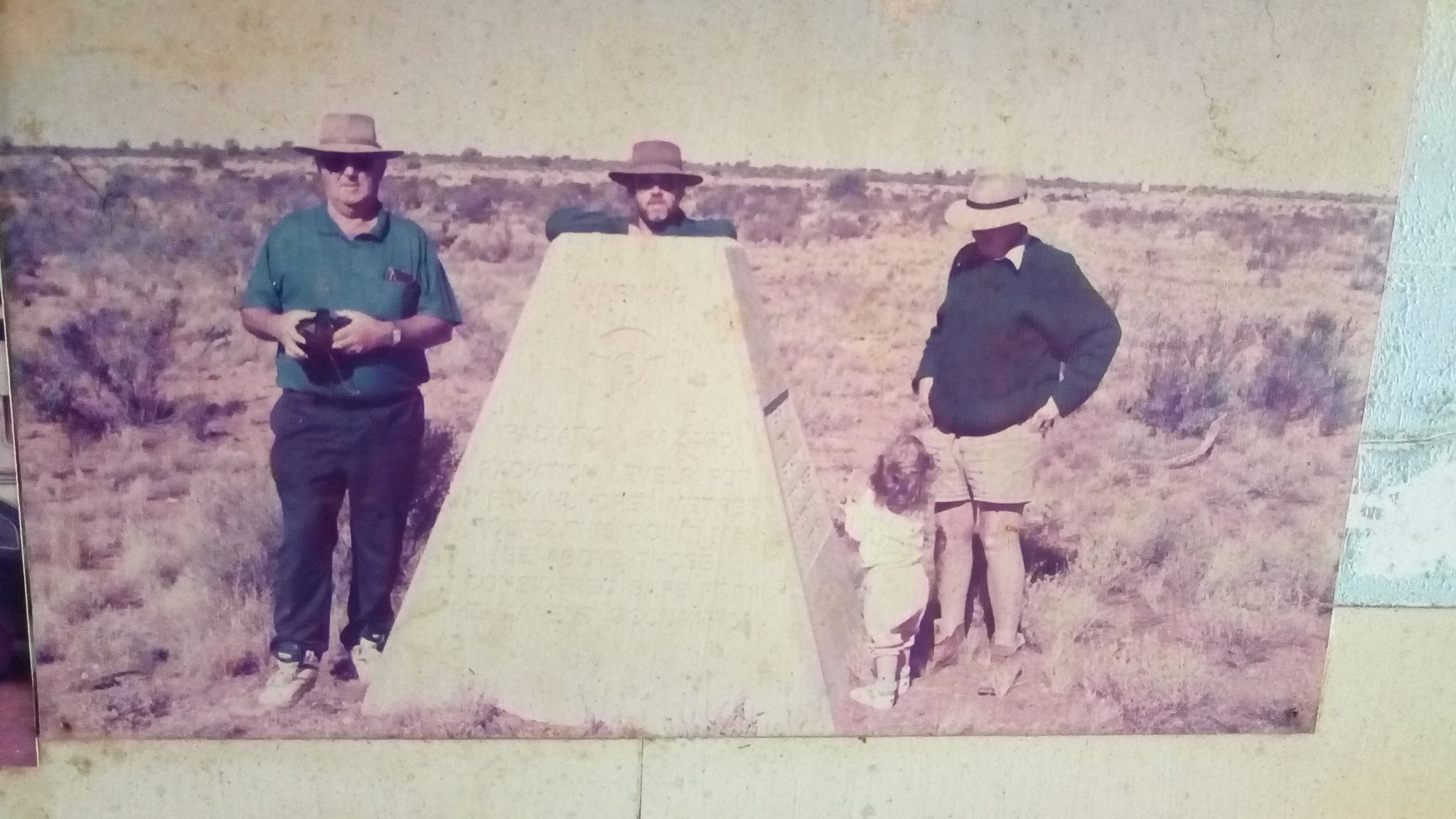 This is a photo of Len with my young daughter, Olivia, at the site of the atomic bomb test in Emu.
My daughter took a real liking to Len and followed him everywhere. I think he really enjoyed it!
She's 27 now but she's still got his autographed books.

The bloke standing on the left is Doug the dozer driver. This is the last time the 2 of them ever went bush together.

The inscriptions on the monument reads:

Side 1. "Test Site Totem 1. A British Atomic Weapon was Test Exploded here on 15 Oct 1953".
Side 2. "Warning - Radiation Hazard. Radiation Levels for a few Hundred Metres around this point may be above those considered safe for permanent occupation" On the picture of the map above you can see the tracks we took.

We travelled North from the Nullabor Hwy up to Cook on the Trans Australian Railway and then on Len's roads up to Vokes Hill Corner.
Then we did a righty and headed East to Emu Junction then Mabel Creek and ended up on the Stuart Hwy North of Coober Pedy.

Both Len and Doug (the dozer driver) were on the trip with us. There was a group of us and Len took us to some fantastic out of the way spots. While we were out there we replaced one of his original markers.

The eyelet pinned on the map is special - I found it out there and it came from on of the original white canvas crosses that Len used to peg out on the ground as marker points for the planes from Woomera to follow.

Here are 2 pictures of something very special to us! A couple of Len's books he autographed for us. One has both his and Doug's signatures. 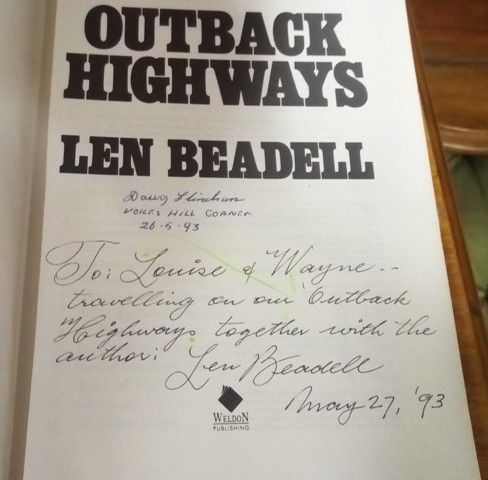 I hope you enjoyed the read! If so, please resteem.

If you are a member of #teamaustralia please refer to this post :
TEAMAUSTRALIA - Give me a hand to recruit New Members!! 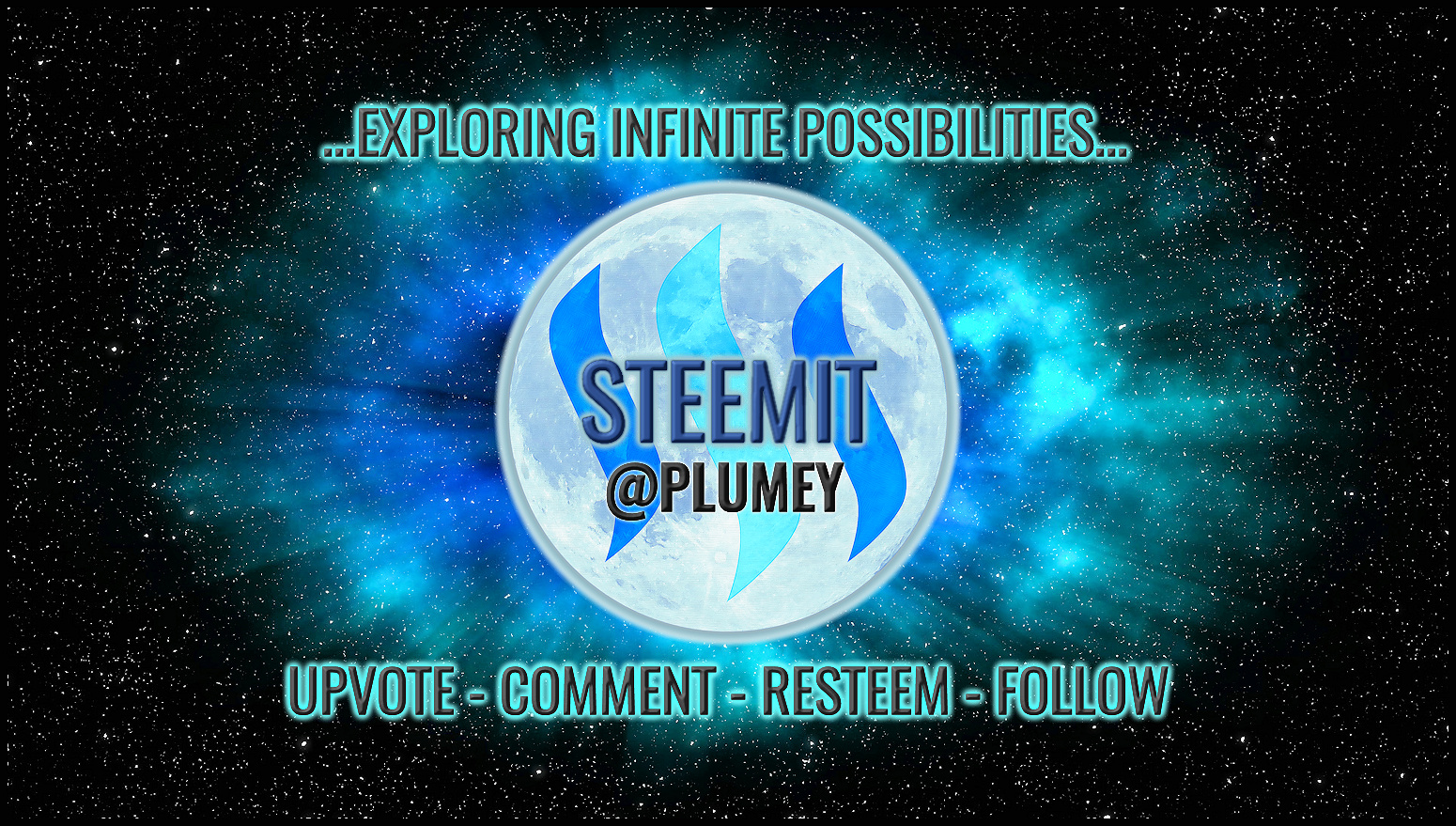 teamaustralia history education writing story
3년 전 by plumey57
$26.51
36 votes
댓글 남기기 23
Authors get paid when people like you upvote their post.If you enjoyed what you read here, create your account today and start earning FREE STEEM!
STEEMKR.COM IS SPONSORED BY

Upvote and resteem. My good friend @urs had resteemed this and it caught my attention. Highly appreciated content and information. Thanks.

Thanks Mate. He was an amazing man!

Really nice accounting of Len Beadell. Really cool that you have autographed books too!

Thanks Mate. You are literally a speed reader and commenter!

Glad you enjoyed it. There's so much out there we don't know about. The next one I'm doing now is about a dog.......amazing!

Good call - but no. Here's the title - I'm still working on it.
"TEAMAUSTRALIA - Special #2. Everybody will love this DOG story (and no, it's not about Red Dog)"

Nice...look forward to reading it

WoW, thanks for that I had no idea. I learned something new today.

He was a real Legend - his books are really worth reading.

Thanks. Please resteem. This is part of a recruitment project to bring more people to Steemit and #teamaustralia

Great story mate, they don't make them this tough any more. I always find it amusing how we have great Aussies that make a huge difference to all our live like these men. But when it comes to voting for the Australian of the year, it seems like you have to be an actor or a sporting star to get a vote. Cheers mate.

Yep, you're right. He was a huge legend. I was very privileged to go bush with him a couple of years before he died. Now, hardly anybody knows about him. His books are worth a read.
I'm going to try and do some more posts on forgotten Aussie icons.

Thanks cheetah, vigilant as always, but @plumey has already stated this as the source so all is good

That's the problem with these bots. Very good at finding duplicate content but not programmed to check for declared sources or permissions.

And a really poorly set up robot at that. How could you not be programmed to find sources and permissions to duplicate content?
How did you miss the links in the post "SOURCE - The above article has been reproduced with kind permission from Aussie Towns"
Piss poor effort!

This post has received gratitude of 3.51% from @appreciator courtesy of @plumey!