MIT figures out how to silently communicate MIT does it again...

Researchers at MIT have developed a headset, called AlterEgo, that allows you to communicate by simply "speaking silently" to yourself. The team was led by Arnav Kapur who says users can be walking down the street and without saying a word or doing anything noticeable to the human eye can be communicating with a computer. Keep in mind the headset isn't necessarily reading your mind. Instead, it uses electrodes to read the neuromuscular signals from the user's internal speech organs when they "say" words in their head. Basically, using bone conduction the headset is aware of the user's jaw muscles that allow for soundless communication. The headset has been trained to be able to associate certain transmissions with specific words - currently - the headset can accurately decipher 100 words but the team intends on adding many more. "Our idea was: Could we have a computing platform that's more internal, that melds human and machine in some ways and that feels like an internal extension of our own cognition," says Kapur.

A professor at Georgia Tech, Thad Starner, put this technology into practice and mentioned how beneficial it would be for those directing airplanes. “You’ve got jet noise all around you, you’re wearing these big ear-protection things — wouldn’t it be great to communicate with voice in an environment where you normally wouldn’t be able to.” Not to mention technology like this can be very valuable for special operations where speaking can potentially mean being detected by your enemy. Or even giving voice to those that can't speak - like individuals who have suffered a stroke and are regaining their speech.

Where is the tech now?

Currently, AlterEgo has been used to communicate with the streaming service Roku. Users could silently navigate the Roku interface to decide what they wanted to watch. AlterEgo has also been used to play a game of chess. Used in arithmetic situations the device has performed relatively well with a 92% accuracy rate across a 10 person trial.

Made with ❤️ by techchat
technology ai robot entertainment writing
3년 전 by techchat61
$220.64
97 votes
댓글 남기기 40
Authors get paid when people like you upvote their post.If you enjoyed what you read here, create your account today and start earning FREE STEEM!
STEEMKR.COM IS SPONSORED BY

wow this is very cool.
Have they set it up to actually talk to other people yet?

I'm not sure. If it's not communicating with another AlterEgo headset already I'm sure it will in the near future.

That would be incredible - probably the closest humans have ever been to telepathically communicate.

it,s amazing but like always the tech is more expensive for those who really need it .the pilot can deal with planes by a huge tools like usual but individual people can,t afford it,s coast

That's a very good point. If the price of the AlterEgo is not feasible it won't get in the hands of all the people that need it.

This would be great for law enforcement as well @techchat

That's another great application for it! Good thinking

Thanks! Always trying to think outside the box lol @techchat

With science and technology going up so fast it is very much a possibility that blind people will be able to see without any transplant.

Echo sonar is the future.

Only time will tell, but I'll be looking into writing about it! Stay tuned

Your post is so great and technological , i love this , good job , keep it up

Thank you for your kind words and I'm glad you enjoy it! I'll take a look at your content!

I have been following the rise of this communication technology, what a powerful tool, thanks a lot for sharing the fruit of this discovery with us all, here on Steemit.com

I'm so glad I was able to bring value to you😁!

It'll be very interesting seeing all the use cases technology like AlterEgo can be applied to.

Wow, the pace at which technology is moving, it won't surprise me if a teleporting device is created in the nearest future (that's if there isn't yet).

It will definitely be interesting to all the different ways you can apply technology like this.

This sounds like it'd be awesome..... Would want to give it a try

I do too! I want to see how user-friendly it actually is.

It is very difficult to build stable software so seeing where the AlterEgo currently is would be very interesting!

Incredible!!! Indian technology really booming and dominating in this sector.
Do we have to move our lips to communicate?

This is great love this

Is there any radiation coming from that thing ??

Nice, Thanks for sharing. 😊👍

I guess it is not new. The gens in our zone has been using it for eqhos. And, i used this headset to even play heavy RPG video games quite some eqhos back. But, thanks for sharing the information. It should never be underestimated.

This would be great, but it is almost impossible, I like that the technology is used to help is a good sign and not to make artifact that help humans make more useless

Technology will lead every living being on the planet to extinction 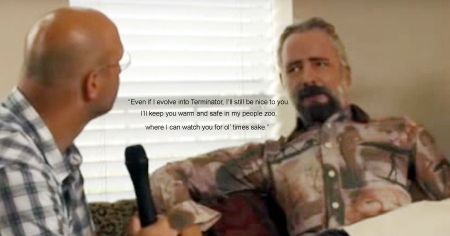 Interesting! I can’t wait to see what’s next.

impressive but true technology day by day we wrap more, that evolution!

Completely amazing! Without a doubt, they did it again. This type of technology can not only be used by aviators or in operations, but it can also allow us to have a greater cognitive development thanks to the rapid resolution of problems that our brain can not naturally resolve, having as a computer assistant directly connected to our cognitive system. Thanks for sharing such valued information!

Thanks for sharing your thoughts and I'm glad you enjoyed learning about AlterEgo!