Virgin Galactic's rocket-powered spacecraft is catching up to SpaceX

We think Richard may use it as his private jet 😂

Richard Branson, the famous founder of the Virgin conglomerate, has outspokenly been working space travel since he founded Virgin Galactic in 2004. His goal was to see a maiden flight by 2009, which has obviously been delayed many years. Virgin Galactic's first test flight went successfully in 2013. However, in October 2014 the VSS Enterprise crashed in a test flight, which drew the company to a temporary standstill.

Both the SpaceShipTwo, nicknamed the VSS Unity, and the White Knight Two, the "motherplane" carrying the VSS Unity, were built by The Spaceship Company, which was acquired by Virgin Galactic in 2012. Interestingly enough, the name Unity was chosen by Stephen Hawking. Also, Hawking's eye is the logo on the side of Unity.

April 5th was its first flight in 3+ years and it turned out to be a success! The VSS Unity flawlessly detached from the White Knight Two and then reached 1.6 Mach speed at a sub-orbital altitude of 68 miles.

It must be tough for Richard to know he's behind SpaceX and Musk in the "Space Race" but he definitely hasn't given up and after his recent accomplishment he's one step closer to the ultimate goal of providing commercial space-flights.

What's your opinion? Do you think Elon Musk and SpaceX have anything to worry about? 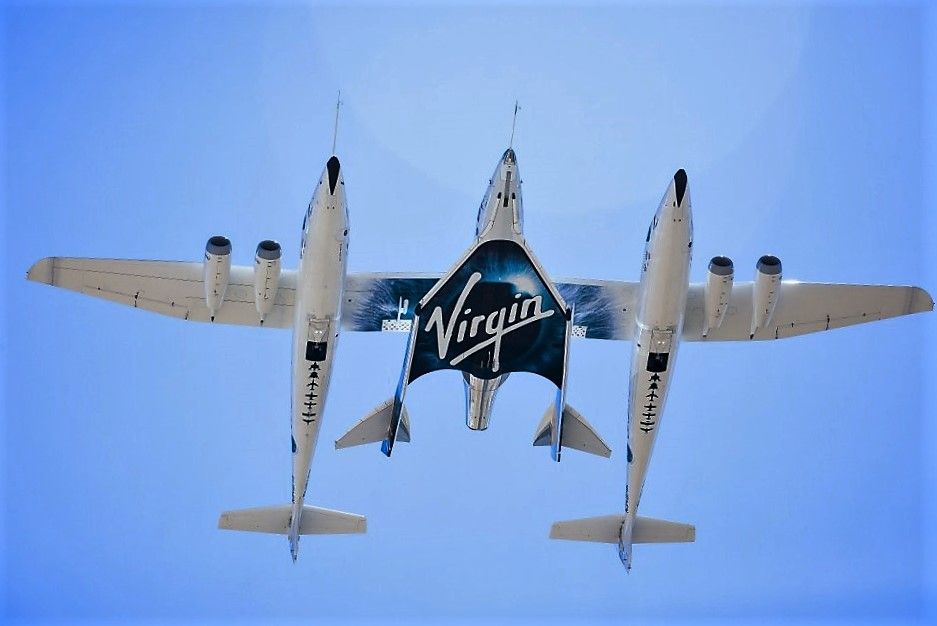 Documentary-style video of the flight:

made with ❤️ by techchat
technology virgin space spacex spaceship
3년 전 by techchat61
$150.04
89 votes
댓글 남기기 29
Authors get paid when people like you upvote their post.If you enjoyed what you read here, create your account today and start earning FREE STEEM!
STEEMKR.COM IS SPONSORED BY

Great post, I'm not as up to date on this tech as I'd like to be, this helps get me there. Cheers

Thanks - I hope we can be a main source of tech news for you! That's what we strive for. Please let us know if there's any topics in particular you'd like us to write about 👍🏼

I bet Musk's BFR will be transporting people sooner than Unity space craft tbh. This is their first test flight, they'll need a whole lot more test before anyone is gonna risk flying that thing.

Absolutely. SpaceX is way ahead of Virgin Galactic right now. Virgin seems like a simpler project than SpaceX's though so we'll see what happens!

Ofcourse they have to be worried, this is a peculiar time when anything can happen, especially this age of technology where advancements are made at the speed of light. Seems like just yesterday when facebook was the in thing with social media, look at it today, look at the advent of blockchain technology. I believe that If Richard doesnt give up, the sky is his limit as we can see in the videos above. Thanks for sharing

Totally agree with you! technology grows by leaps and bounds. This, yesterday was a dream , today almost a reality. Maybe, in our life time we will travel to the moon, who knows....

It's highly likely that moon travel will happen in the next decade - then to mars!

That's right! Maybe we will be there, something like : I'm going to the moon for vacations!

Thanks for your thought-out reply! I couldn't agree more with everything you've said. The world is changing at an unprecedented pace and it's just getting faster. The proliferation of technology is going to make the 21st century a wild ride, but a ride I'm extremely excited for!

You seem knowledgable about tech - what is it that you do?

Sooo wild only the strong will stand, lets imagine a quick picture, remember the advent of keyboard from typewriter the transition to what it is now, who could have guessed. Do you want to know the next? Mobile phones with no touch keyboard...heard about that yet?massive, the amount of ico's launching with their awesome use cases are just amazing, we might land ourselves in a time where you can earn by keeping your eye open lool or mouth 😆

Ha! I do a bunch, im a natural lover of tech, im also an introvert, that's like the fire to my tech love, i do poetry and i do art basically.

The way I see it, space is big enough for there to be more than one dominant player in the space race. I think SpaceX is more focused on the logistical side of things with its Falcon Heavy rockets, Virgin appears to be focused on the passenger/transport aspect and Jeff Bezos over at Amazon is probably sitting in his lair stroking a Persian cat thinking about how he can overthrow the government and institute himself as leader.

I would like to think that maybe SpaceX and Virgin one day will partner up, as we edge closer to the reality of going to Mars, it's going to take the effort of more than one company to get us there.

Sadly, Stephen Hawking won't be alive to see it unfold.

haha first off I love the humor in your comment - Bezos with his Persian cat 😂. As for SpaceX vs. Virgin Galactic, your analysis couldn't be more spot on. SpaceX is more focused on the logistics of making deep space travel affordable and possible while Virgin Galactic is trying to make it a reality to transport humans on a "flight" 68 miles above the earth. I could definitely see the two companies partnering up down the road. It's going to be interesting to watch it unfold!

Thank you for sharing this post with us!, I love the space tech!, upvoted and resteemed! and following you now!

You're welcome cosmicboy123!! I'm always glad to meet someone who's highly interested in tech - I look forward to keeping in touch!

Wow .. I'm curious what will happen.

Likewise. We'll be sure to keep you updated on any new accomplishments either of these companies make. Have a great weekend!

Thank you, I appreciate the encouragement.

Great post! I think 'Space Travel' is an industry in its infancy but will become the norm, just as travel by airplane has become. That's why I am happy to see some competition in this industry, which I expect will give the public more opportunity to experience it earlier and cheaper.

You took the words straight from my mouth - well said!

I'm glad he did it.
When does Jeff Bezos next?