Oculus, which was acquired by Facebook in 2014 for $2.3 billion, has released the first mainstream virtual reality headset, Oculus Go. The headset is the first mobile virtual reality headset that doesn't require a phone for power or connection to a computer. The Oculus Go costs $199 for 32GB and $249 for 64GB and can be found at any electronics shop like Best Buy. It ships with a controller you use as a wand throughout your experiences. You navigate by pointing and clicking throughout your apps. 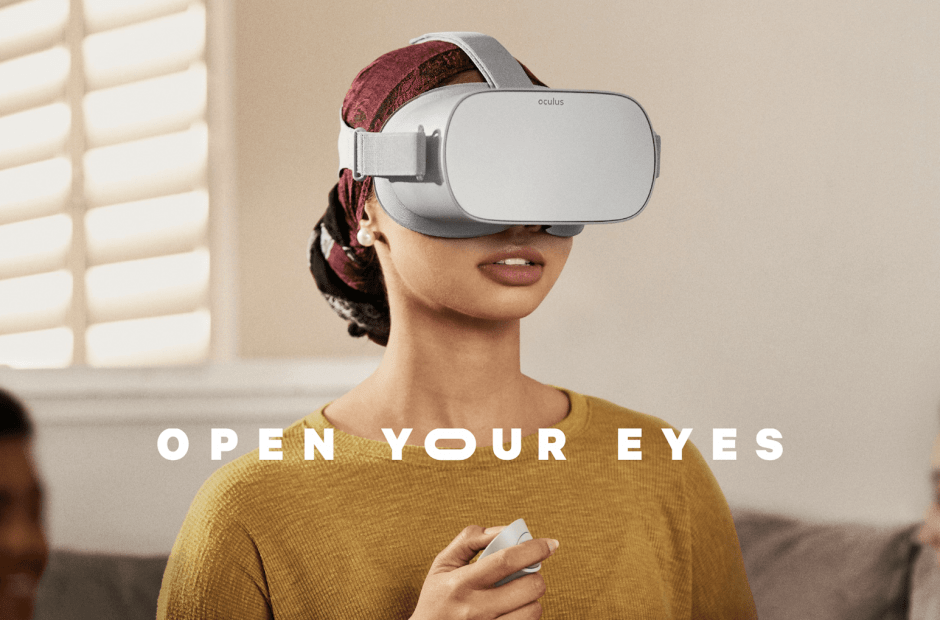 Oculus has one of the largest app stores in the space having already 1000+ apps available for download. One of the coolest apps available is Oculus Rooms, which allow you (in avatar form) to invite friends or family into your * virtual room* and play games, watch videos, or surf the web. You can customize your room by choosing the environment, photos on the wall, and even furniture. Netflix has also released an app that allows users to visit the Netflix lounge and stream all of Netflix's shows. 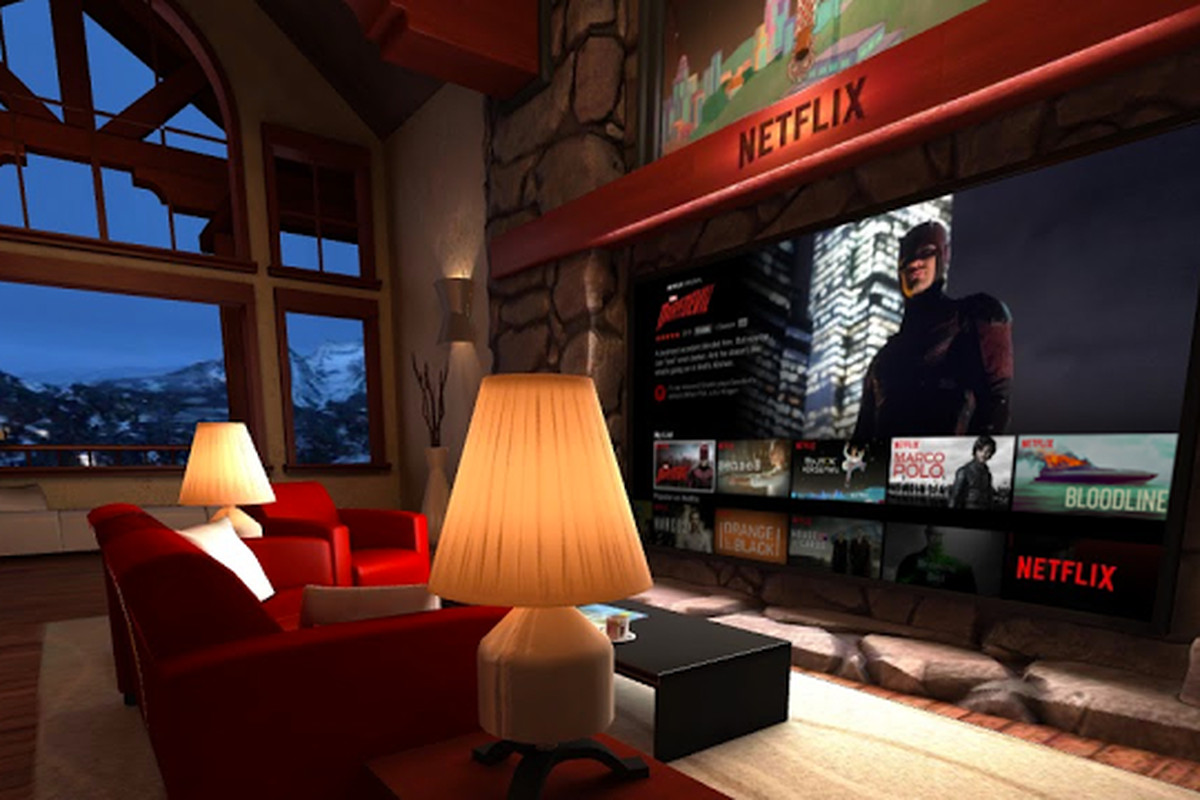 Its screen is a 5.5-inch display with a 2560 x 1440 resolution. The components aren't amazing, but definitely provides a decent experience. Considering virtual reality is at its infancy the resolution needs some improvements, but Oculus still uses a higher-quality fresnel lenses, similar to the lenses in the Oculus Rift. Oculus mentions the battery lasts around 3 hours, but this will vary on device depending on a user's settings.

Keep in mind the Oculus Go doesn't keep track of your head's movement, and is only registering your head's rotation. Similarly, the controller isn't spatially aware but users can rotate it. In my opinion, virtual reality is going to be the closest humans get to teleportation. By including a 360 degree camera in any environment, like a basketball game or a wedding you couldn't attend, users can essentially tap into any experience on earth from the comfort of their own bed.

Made with ❤️ by techchat
technology virtualreality vr facebook
3년 전 by techchat61
$181.69
72 votes
댓글 남기기 39
Authors get paid when people like you upvote their post.If you enjoyed what you read here, create your account today and start earning FREE STEEM!
STEEMKR.COM IS SPONSORED BY

I need to get one this things then I will isolate myself from averything for a long time, just to refresh myself in the digital world, then get back to problems of life.

I hope you'll use it as a positive refresher and way to cope with the problems you're experiencing. All the best to you

yeah, a lot of vr products for mass consumption

What do you mean by "mass consumption"?

I'm waiting for VR headsets to replace monitors at companies. The price point is already there.

The weakness of the VR headset thus far is reading text, but with some creative zoom options, it can't be that far out.

You're right - a VR headset will cost around $600, but you must have the computer power to be able to run the VR. Reading text on the Oculus Go can be a bit challenging - but watching content is pretty amazing.

The next big play with virtual reality seems like it's going to be eye tracking. This will allow the headset to understand where you are looking and be able to render exactly where you're looking with higher resolution.

I've read about that. It will be like having the opposite of cataracts.

I imagine, once you get used to it, you won't even notice.

Yeah exactly - we'd have perfect vision wherever we are looking! Ready Player One is right. Have you seen it yet?

WRT Ready Player One, I've read the book and watched the movie.

I highly recommend listening to the audiobook that is narrated by Will Wheaton. The movie is very good, but the book is amazing!!!

Virtual reality this is a magic, send to another world.

There really is a whole other world inside that headset

It's cool, but the killer accessory for VR is an omni-directional treadmill. When your VR experience is within the confines of a few square feet it makes it difficult to create immersive experiences.

Absolutely - I've thought about that a lot. There is some company creating a 360 degree treadmill that can be put into a room. Then you can literally run around in any direction and stay confined inside a room in your home - What an incredible time we are living in!

Yes there are a few companies developing VR Tradmills, but like the headsets themselves they are quite primitive. I think it's probably going to be about 5 years before we get a truly immersive VR experience, and that might be a bit optimistic.

Watching a movie in virtual reality sounds cool while sitting in a virtual lounge.

Honestly, it's amazing. It's so much fun watching movies in a "lounge" with friends but actually be in your bed haha

A few more years and high quality VR will be everywhere and in everything! Cant wait!

Quality of graphics is the key. This time around it feels like the original Xbox - not bad but not great. The next iteration will be the Xbox 360, which was game changing. In 4 - 6 years we'll have the Xbox One level of graphics in VR. Our bodies and brains will really believe they are fully immersed in the Virtual World.

Discovery of modern civilization. The virtual world has brought people to near. awesome post. Thank you so much.

Thank you! It's my pleasure

While not enough games for VR. Very little quantity.

I agree. They will be created in due time. There aren't enough consumers using VR yet for the big gaming companies to create games. With time there will be all kinds of games for VR.

"decent", although a descent experience would be pretty cool. Why would someone spend $200 on this instead of using one of the jobs that just snaps on your phone?

It's much better quality than a Google Cardboard or similar products that snap on your phone. I think $200 is incredibly reasonable considering the experience it offers. Just my 2 cents

I don't know that I would want any of them strapped to my head long enough to watch a movie or for more than a few minutes.

Such awesome technology, soon athletes will be preparing for games using this type of tech. to better their skills.

Absolutely! That will be a major use of VR. I've also thought about preparing for public speaking with VR, which is along the same lines as an athlete or performer preparing.

The future is getting stranger and stranger. We might see flying cars soon. Let's get ready for possibilities with the help of modern technology and science.

The future is getting better and better. The quality of life in the rest of the 21st century is going to improve more than we've ever seen before!

There’s already 21 apps and games launching on Oculus Go. I I’m curious how social media step into this.

I believe there are already 1,000 plus apps. The games will come with time. Social media will be jumping on this soon.

Amazing. The name Oculus kinda freaks me out though...and personally, I think we have too many people detached from reality for too long already.

I think you're probably right about people already being detached from reality. When someone is playing a video game or using their phone they really aren't here - they are in their phones world. VR just makes the experience immersive. It's like any other tool - it can be used for good and bad. I just hope it causes more good than bad!

I don't think that VR goes to the real mass market ... it's another good headset but after the fun of 10 first minutes it's over for a long run...

In the future we will laugh at the old times when we could only experience the virtual world through a phone, computer, or TV screen. The VR experience can and will be so much better. VR will undoubtedly go to the mass market. People will be spending more time in a VR headset or maybe even VR contacts someday than we spend on our phones now.