A few weeks ago I did an article about innovation. I used Fire Blockade as an example. See that article below.

As you saw in the video released, Blockade is a highly effective fire extinguishing formula. The cool thing about a product like this is the different applications it has. A few of them include: firefighters, chemical plants, oil rigs, and home safety.

Below is a home safety video demonstration.

In the above video you see the effectiveness of using a 16 oz canister on a grease fire.

As stated in my previous article, Blockade fights fire by removing two of the three elements of fire: fuel and heat. Traditional methods typically focus on oxygen only. You can find out more about Blockade at https://www.responderfsp.com/.

technology fire home safety industrial
4년 전 by traylorjonathan52
$47.00
91 votes
댓글 남기기 72
Authors get paid when people like you upvote their post.If you enjoyed what you read here, create your account today and start earning FREE STEEM!
STEEMKR.COM IS SPONSORED BY

Ohhh wow ~ ! This was the company you said that you were working on buddy. It can be use in huge fire?! 🤔🤔

Yes it's great for large and small. :)

Good demonstration. But how do you remove the fuel?

This comment has received a 0.15 % upvote from @speedvoter thanks to: @sn0w-fox.

How does Fire Blockade change fuels or extinguish them?

To answer your question with a simple one line or one paragraph answer does not do the product justice nor does it explain the entirety of how Fire Blockade actually works.

We first go back to the Fire Triangle and look at what occurs or what is needed to ignite a fire
A Fuel , and ignition or heat source , and oxygen.

Unlike other material for extinguishment of fire which attack the presence of oxygen , Fire Blockade work on the fuel in the fire and the temperature of the ignition source or heat source present.

When an item burns or combust there is a point where the gassing of that particular fuel source ( wood, plastic, fiber, or chemical ) reaches an ideal mixture of oxygen that is present and the fuels equivalent gas production or other gasses being released by the fuel source to ignite when the heat source reaches sufficient temperature to ignite these materials .

During a fire , gaseous fuels are formed due to the process of pyrolysis. These gases will mix with other gases in the surrounding area ( many times atmospheric oxygen ) when the these gases mix or form at concentrations high enough to ignite the LEL ( Lower explosive Limit ) is reached and the heat source ignites these products. As the now flaming or ignited product burns more and more gases of pyrolysis are formed and the subsequent energy needed to burn these products usually decreases ( however there can also be enough of the gases present that one reaches what is called an UEL Upper Explosive limit, where no additional heat or no additional gasses can be added and there is no longer a flame . In other cases the reverse happens when the heat source begins to decline and the materials involved in combustion cannot be put in high enough concentrations that ignition is possible.

In the case of the addition of Fire Blockade its chemical reaction adds initial energy into the system which then requires the heat or ignition source to get hotter in order to reach the LEL as it is also going up. At the same time Fire Blockade is using its water component and penetrating agents to lower the heat or ignition point of the system and subsequently does not allow the gasses formed to go into concentrations high enough to ignite. You will see this happen when using Fire Blockade when there is an initial flash when the agents in Fire Blockade are introduced into the flames or area of combustion .

So as Fire Blockade is entered into a system it is adding additional compounds which create a need for a higher temperature of the gases to ignite and continue burning and at the same time we are taking heat and energy from the fuels causing a scenario where the products involved cannot reach a sufficient LEL .

In addition Fire Blockade acts as a flocculent by combining air borne particles that have not fully combusted and that supply added fuel to the fire scenario and drops them from air suspension .This is noted as the addition of Fire Blockade into a fire scenario will immediately change the dark black and gray smoke present into white steam and or clear line of site.

As a graph you would represent this by

Normal fire heat increases and gases present increase to add fuel to the fire Fuels is consumed by the ignition source as the ignition or heat increases from combustion products more gases in the atmosphere being released continue to burn never reaching UEL. The gases added by Fire Blockade act as a thermal ballast and helps to extract heat from the process 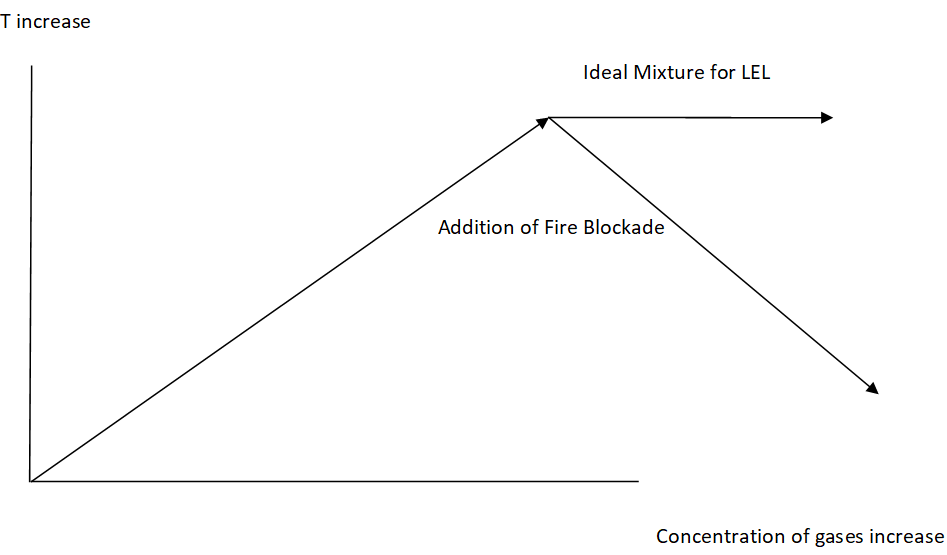 Cool, flamable houses for sure need some type of extinguisher that handles the different types of fires effectively

You have received an upvote from @nicestbot. I am an automated curation bot trying to make minnows happy.

You got a 15.19% upvote from @buildawhale courtesy of @traylorjonathan!
If you believe this post is spam or abuse, please report it to our Discord #abuse channel.

uvas from kryptonia spreading some love

Is good to konw this to prevent fire. Kryptonia @juancarlos2906

you have a new follower @sorenkierkegaard

Thanks! Glad to hear from you.

great blog....it will be useful here it's fire prevention month...

very interesting.. it will be very useful during fire prevention month....

Your post is full of information. Thankyou for sharing. My kryptonia name is janjandls

An interesting product, does it work well on fires that are larger and less contained? Do you have larger canisters than the one used in the video? Chr7is from Kryptonia

Hey Chr7is, yes it works on different size fires. Here is the page where they have many different size containers. https://www.responderfsp.com/shop?olsFocus=false&olsPage=products

Also in the other article I wrote there is a tire fire demo which is quite a bit larger you may want to check out. :)

whoah. This is interesting!

Helpful post..thank you for sharing

Awesome innovation which can be very helpful.

GREAT. THANKS FOR SHARING!

So cool dude! Keep it up

oh wow! interesting and that would be helpful.

nice! keep it up

Thank you for the interesting video

Interesting way to put out a fire!

woooh! Keep it up!

Informative article. Thanks for sharing😄

Thanks for sharing very imformative.

wOW want to try this one :)

It's a great option.

Thanks rob! I appreciate that.

Thank you for Sharing Basic Knowledge about fire, Keep it Grow friend, my kryptonia user name is kantzone from @kryptonia.

You're welcome. Glad to hear from you sir.

You meant to say that removing FUEL and HEAT is more effective than focusing on OXYGEN?