Nikola Tesla and what he did for us. 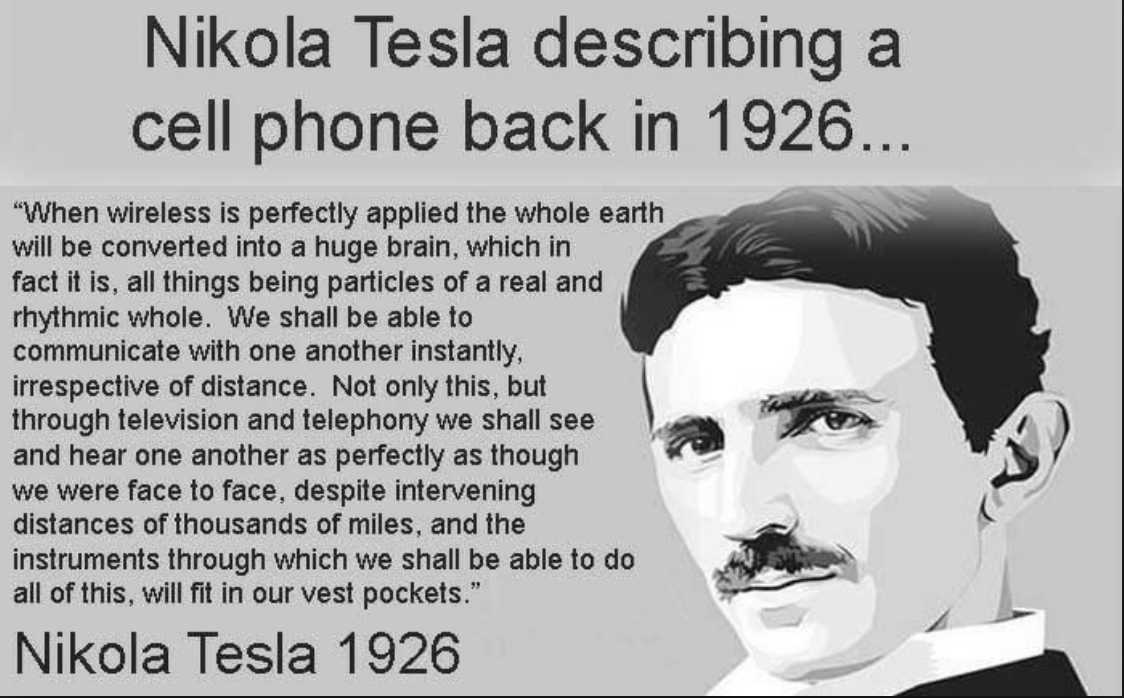 This is someone who in my opinion is the reason why our world is as advanced as it is today. This quote is how he thought cell phones will work. Now, in today's age, you might be thinking oh big deal that's an idea anyone could say. Back then he had to read endless books and create things himself to actually build what he built. Now we can google anything and have answers in an instant. He did live a great long life with helping the world greatly so let's get into what he did.

He made dozens of breakthroughs in the production, transmission, and application of electric power. He invented the first alternating current (AC) motor and developed AC generation and transmission technology. The AC electric system he invented is still used to this day. If that isn't crazy enough the Tesla coil that he invented is also used in radio technology to this day. A radio tesla is a form of an induction coil for producing high-frequency alternating currents. He invented one of the worlds first wireless remote controls. Tesla, of course, was named after him.

Now, how many things did he invent? Who knows but one of the most mind-blowing things is that he holds 300 PATENTS. First of all, it cost quite a good amount to get a patent and I'm pretty sure you don't know many people with patents. He tried to build a global, wireless communication system — to be transmitted through a large electrical tower — for sharing information and providing free electricity throughout the world.

What do you think about him?

Want to join the universal income movement? Sign up below!

tesla blog life steemit electricity
2년 전 by jason728261
$1.53
17 votes
댓글 남기기 4
Authors get paid when people like you upvote their post.If you enjoyed what you read here, create your account today and start earning FREE STEEM!
STEEMKR.COM IS SPONSORED BY

This really is the most underrated scientist ever and indeed the one that's responsible for almost every modern piece of technology we have. What do I think about him? I think Albert Einstein said it best when he was asked what it felt like to be the most brilliant human in history. His answer was: "I don't know. You'll have to ask Nikola Tesla."

Very underrated! I couldn't imagine what he would be coming up with if he was born at this time. I'm sure when Albert said that he knew people still wouldn't believe him.

Looks like the only thing he messed up on was that no one today has a vest pocket! Oh well. Close enough, right?

I'm not a techie, but I love history and I find this extremely fascinating. Wanting to know more... Thanks for the post, @jason7282