In the past months, I have been thinking casually about working to establish an overarching theory of distributed ledger technology (DLT). This is the basic term I use to describe cryptocurrencies, blockchains, and other related systems. In the coming months as I move to my new role as a University Professor, I plan to write a series of proposals or whitepapers which will define some interesting questions in the area of DLT theory that I believe I can answer. Part of the goal of this will be to find like-minded individuals who are interested in working with me and providing some funding for this work. As I work towards this and release the papers, I'll plan to write a series of blog articles to explain the concepts and issues to a wider audience.

What does Blockchain Theory mean?

Before describing the sorts of questions I'll be asking, in this article I'd like to briefly discuss some of my basic thoughts about the study of theory. "Theory" is one of those words that can mean quite a number of different things, depending on its context -- so first I need to explain what I'm talking about.

I found the following definition of the kind of Theory that I'm talking about on dictionary.com:

A body of principles, theorems, or the like, belonging to one subject.

Focus there on the word Principles.

What does it mean to develop theory?

Theory, the way I'm using it, is a lot of math. To give you a sense of what this work looks like, here is a screen capture of the public version of the most recent theory paper I've published: If you can get past the IEEEXplore paywall, you can also see the preprint here: https://ieeexplore.ieee.org/document/8361010/

Lots of math, coupled with asking the right questions and figuring out how to pose the questions in a clever mathematical way. There is no magic bullet, and no guarantee that you're on the right track until you prove the answer. But once you've proved the answer, you actually can know for sure that the problem is solved. That's the deeply magical thing about good theory: you get the answers by proving them mathematically, which means that they're true in a way that many other statements can't be.

Next, we need to ask the right questions. That's what I'll be doing in the next weeks and months. We need good questions whose answers would actually be helpful in designing blockchains and DLT. At the same time, the questions need to be general enough that they're worth spending the time on to begin with. Asking these kinds of questions is a challenge in itself, but it's one which I'll pursue with vigor. Once we have questions, then the real hard work can commence to start answering them.

If you want to partner with me to define the questions, find the answers, or fund those of us who do, please reply here and join the conversation. I'm always on the lookout for motivated graduate students (get paid to get a PhD in computer science in beautiful Colorado Springs!) and funding partners.

Discussion prompt: What questions interest you about blockchains?

theory research steemstem cryptocurrency blockchain
3년 전 by biophil66
$18.80
55 votes
댓글 남기기 28
Authors get paid when people like you upvote their post.If you enjoyed what you read here, create your account today and start earning FREE STEEM!
STEEMKR.COM IS SPONSORED BY

Are there crypto currencies with a low market cap that are very useful? If so, are they just unheard of to the cryptocurrency community or is the programming inefficient.

It is interesting because market cap is a direct measure in another currency like USD, but the reason many coins exist to facilitate trade among people in a way that decouples us from that thinking. I'm probably not making sense because this is not my area of expertise by far, but its kind of like micro-GDP's , but we want to stop allowing outside forces dictate our ability to trade within certain markets. Steemit is trade in ideas/teaching/art, and we are simultaneously trying to stop putting a dollar value on it while also trying to figure out what our teaching value is in relation to rent or groceries. I love the crypto space because we are shaking our current systems to their core to see what aspects need to be removed as a give. @biophil, your students will be very lucky to have such an interesting and thoughtful teacher!

Steemit is trade in ideas/teaching/art

Strongly disagree. It includes ideas, teaching and art. Limiting steem to only these concepts hurts the blockchain as a whole.

All those mathematical symbols! I got a headache just looking at that image..

The rate at which new crypto coins are springing up every day, i wonder what happened now compared to when we have only few crypto coins. another willbe why are the normal social media we know off before fighting crypto currencies. like twitter and facebook are all deleting any airdrop post users do post.

posting is very remarkable ,,, this can be my future reference.

Interesting :-)
Hope to see you back... Professor!

-a good summary of this book would probably be just right for required reading/ and class discussion.

Thanks for the recommendation. always looking for interesting books

Greetings sir.
Sorry I changed the topic.
I am a new person in steemit. And many I do not know about Blokchain, pocket.
There was a comment on my post about pocket delivery problem.
I do not understand, may I ask for advice on sir?
thank you 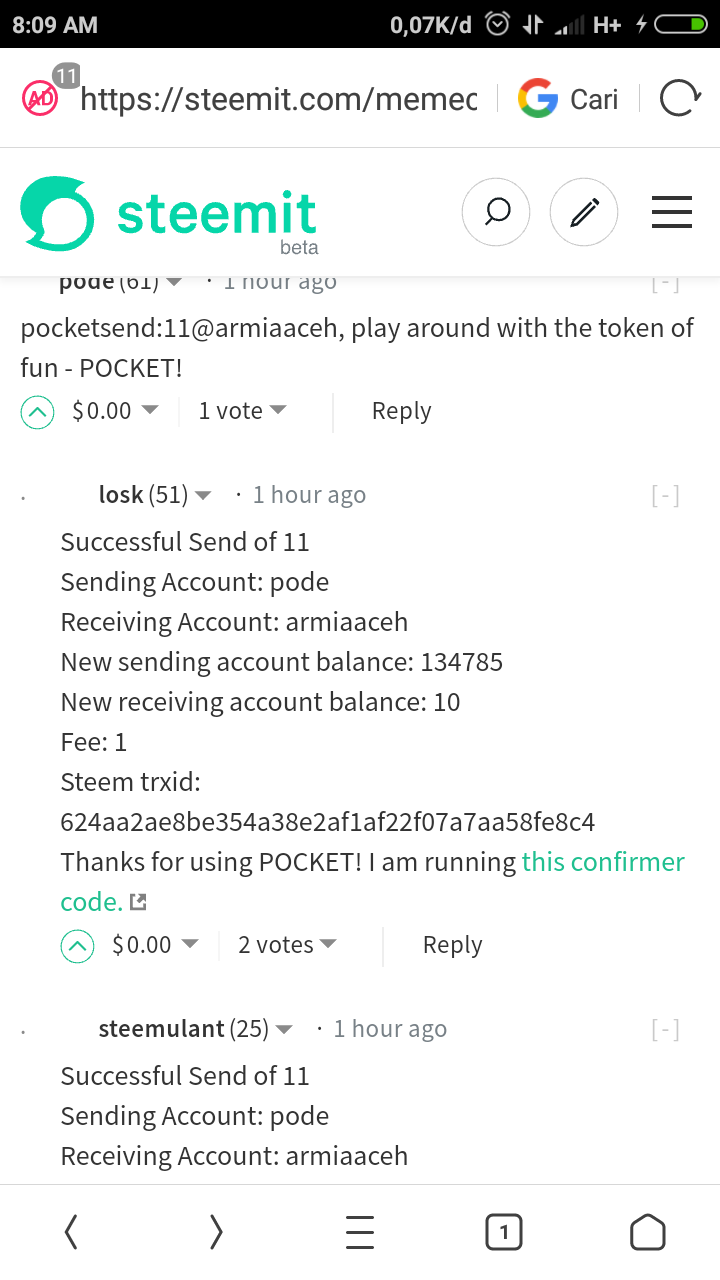 Someone sent you 10 Pocket tokens. No problem! the system is working as it should!

Read more about it here: https://steemit.com/pocket/@biophil/pocket-announcement

Thank you very much for information sir

is it possible that blockcoint is one of the most precise breakthroughs we can use in technological times. No way is the best other than blockcoint considering the progress of technology is increasing

Tell me about this "blockcoint" thing of which you speak.

When you have a hammer, every problem looks like a nail. People are trying to blockchain everything. There are other solutions. While blockchaining may make corruption difficult, there are other ways to get corrupt people out those situations. Licenses, background checks, Laws, regulations, inspections. A lot of wisdom has gone into the social edicts of everything from mail, home inspections, electric and fire codes. These regualtions came out in a time that did not have blockchaining. While I love the fact that you can use blockchain technologies with people you don't trust; sometimes it is better to make sure you only deal with people you can trust. If you can't trust a man, what difference does it make if he writes something down?

Pheeew! Quite a lot of research works and great energy on display here man. Keep up the good job man. Really do appreciate it!

So from a business standpoint, one of the things blockchains are good at is establishing honesty and data integrity. Now someone needs to care, and to audit the data, or bad things can still happen -bitconnect, scam icos. But Business history is ripe with accountants that have cooked the books, and nation states that have lost billions -like what happens when corrupt african government officials get hold of money. So while one of the major cost/benefit analysis of blockchain type tech is to increase honesty in the data. When you have a situation of low trust, or high risk, block-chaining the data, or even hashes of data, proves certain things existed. This helps defeat conspiracy theories or proves them beyond any doubt. Generally, this openness is good for an organization.

There may be an underlying theory to simple types of blockchain, directed acyclic graph DAG (tangle) as of iota and bitlattice.org . bitlattice also has transformations to DAG , before this it is in 5 dimensions and does not have the limitations of blockchains (says the author).
I myself find it a nice question to describe the user interaction with the bitlattice/DAG/simple type of blockchain and to find out how
https://www.computerwoche.de/a/syntegration-wenn-alle-wie-ein-gehirn-arbeiten,577452 helps to develop out of bitlattice a set of rules/model/theory that is better than blockchain and DAG-tangle .
P.S: Such network (bitlattice) could potentially act as a neural network and be able to self-organize to a certain extent. (cited) deepl.com may help You to translate the above article from Computerwoche .

The biggest benefit though i would say is that Block chain projects are a new type of stock market allowing people to innovate without government intervention. Some people live in relatively good countries -like the USA- others live in places where governments are attempting to eliminate corporations, have excessive regulation, and stop free enterprise. Blockchain has the ability to free programmers for bad governments worldwide.

You inspired me some questions with this post. I'm new to the space but willing to learn fast.

The study of limitations is indeed well due. There are as you say inherent limit which we already have to deal with. Communication speed for example is a problem for distributed technology. On top of that there is the on purpose lag time to ensure that consensus is reached. Blockchains have to be designed to be slow for consensus to be reached.

Going beyond the pure blockchain technology, certainly the incentives model for adoption and maintenance of the technology are needed. What I find interesing is that blockchains allow us to develop some economical playgrounds to test policies.