"Alpha" is the difference between how your portfolio grows or shrinks with respect to overall market. If you have positive and big alpha that means, however the market moves you should be on the plus side.

For example if you "know" that blockchain will be big, and some projects will certainly do better than the others, you can buy the better ones and sell the bad ones. The difference will be your gain. To learn more about hedging Khan's Academy has good videos about hedge funds. I recommend them.

I collected prices in 5 minute intervals for 300 coins, and got the history in between Jan 1st and Aug 31st, 2017. So this doesn't include the Chinese FUD. When a price is not available the tool (in Python) disregarded and didn't count that price in calculations. The correlation type is Pearson.

After calculating the correlations, for the sake of simplicity I selected and showed here 40 coins with most volume traded on exchanges. 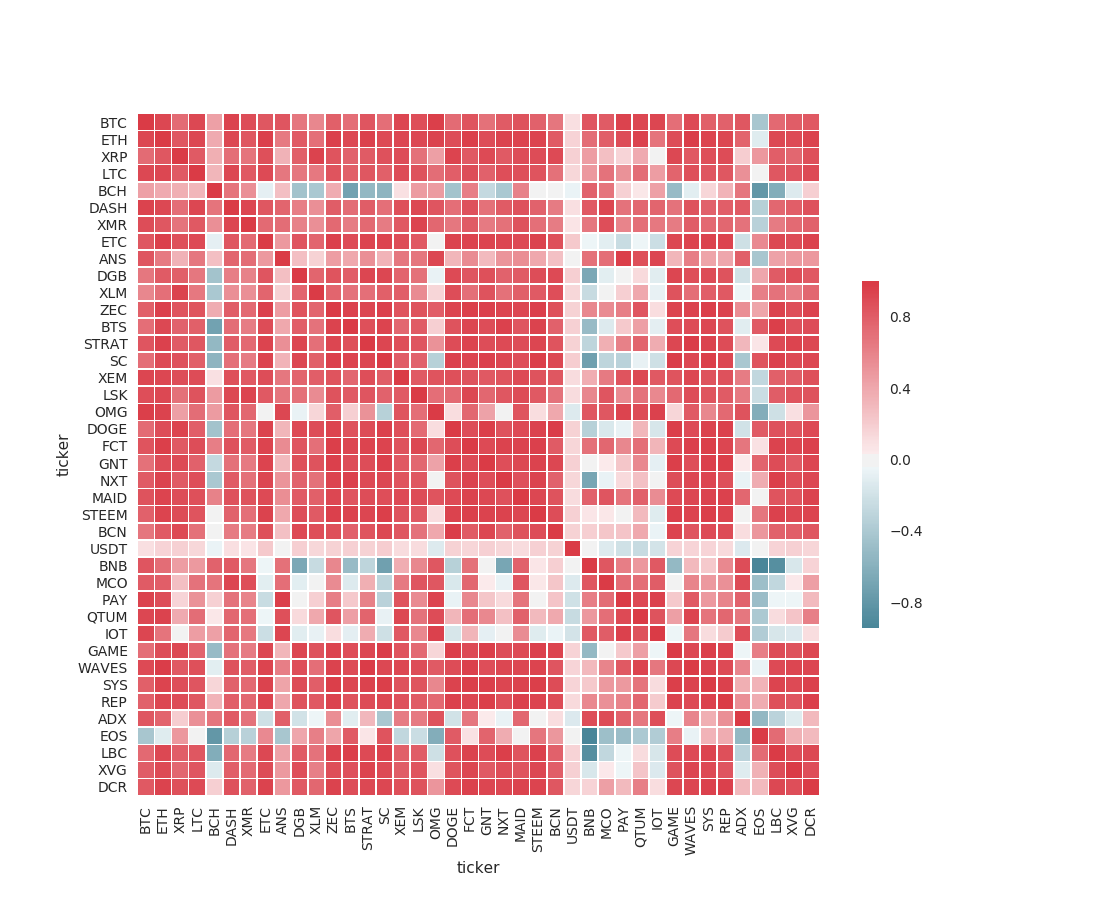 White belt (USDT) has almost no relation to others. Mixed red-green belts are "independent" coins.

Disregarding USDT which is uncorrelated by design, we have BCH, EOS and BNB on top.

We can say the coins on top have their own way of moving in the markets. Or if sometimes they move in the opposite direction to others, the correlation value gets lower and lower. If the coin is moving as everybody else, the value gets higher. Interestingly ETH moves very similar to whole market. Possibly because all the tokens are related to it.

Interestingly EOS came second. Why do you think is this the case? STEEM and BTS are not even close. My opinion is a lot of tokens are in ETH and EOS is the alternative of ETH, hence it has one of the lowest correlations.

trading altcoin ta
4년 전 by deaddy50
$3.97
17 votes
댓글 남기기 5
Authors get paid when people like you upvote their post.If you enjoyed what you read here, create your account today and start earning FREE STEEM!
STEEMKR.COM IS SPONSORED BY

I guess ETH is going to go through some rough times if it follows the markets and we have seen that it has dipped with everything else (as expected).

BCH is really spontaneous and at first was purely getting pumped and dumped but it has gradually been gaining support over time from the news and new usabilities.

However I'm not sure why EOS is so uncorrelated. I guess it could be just because it is going through its ICO phase and it has led to a stagnating price rather than something that constantly follows the market. It stayed around a steady $1.50 before bitfinex mentioned how they are removing USD/EOS as well as the news about China. Pretty interesting @deaddy

excellent post. much accurate and much needed information @deaddy Resteemed

deaddy i had time without see you here, about the post i think you made an interesting correlation about this alts now is a good moment to load our wallets of some interesting projects as Steem,Eos,Eth etc..., Thanks for your post. Regards

Hey thats a good 1. A new and interesting point of view.