This App Pays You To Walk Outside | Sweatcoin Get PAID to WALK

I love getting paid to do things, and this app that I talk about in this video PAYS you to go walk outside (yes, it only works outside for now). I have been making videos talking about how important going on 30-60 minute walks on a daily basis are! What I find most interesting is that they are looking into developing this into a real cryptocurrency, and I think this company is onto something. Lately I have been having a ton of fun trying new apps that I come across and I have fun reviewing them (@cryptocopus, I haven’t forgotten about your app). It’s so cool to live at a time where we are getting PAID to walk. Crazy, huh? Watch the video to learn more about the app and if I get more requests I will make a how-to video soon!

Click Here To Download The App
If you aren’t using a phone, use this URL in your mobile broswer and you will be redirected to download the app: http://sweatco.in/i/paolajane
Thanks for accepting my invite!

How is the data usage on sweat coin?

Pretty neat idea! Ive just learned about Mithril and LIT recently too. Get paid for snap chat! It works too

Interesting, I gotta check it out!

Wow, get paid to walk and snapchat, I'm so trying them out!

Yes! give it a shot :) thanks so much for esteeming :)

Whoa! I gotta give this a try. Thanks for sharing!

Sounds interesting. The link to download isn't properly linked I guess. Would appreciate if you can fix it :)

Haha I just fixed it, thank you so much for letting me know!

looks interesing and motivates to walk around, but with sceptical about this mainly the reason of gpu hack that was in pokemon go, everyone just sat there playing POGO from a house.. I'm interested and I hope its "GPS hack resistant"

yes your are right,, its right for helt and fitness,thanks for share

Great app to motivate yourself to be active. Will drain battery though. Just an FYI for everybody.

Thats such a brilliant anx awesome app. Earning money by just roaming around outside thats an easy way. I would love rto try out this app.

interesting read, thanks for sharing. I've smashed the upvote button for you!

I had it on my phone for awhile. I have to give an unbiased comment. I have no hatred of the app. Its a good idea. Its a real battery hog though on my Samsung S7. I could easily make it from 7am to midnight without even worrying about charging my phone with average use. With this app loaded, I would barely make it to around 5pm without needing a charge.

The other issue is that relies heavily on GPS or at least your movement detected by location services via cell towers. Well, I work in a building where there is a cellular repeater for Verizon, my carrier. This means that as far as my phone is concerned, I could walk 20 miles around my hallways or outside the building within a reasonable distance and I haven't moved an inch. The repeater must simply keep you locked away from triangulation, so you don't move as far as the application is concerned. It was kind of disappointing to know that all of my steps won't be counted.

I think having it loaded for about 2 months, I think I got near $5, but the only thing that I could do with it is buy products that I didn't want. Its a great app if you're active and mobile. Give it a try, but for those of us in corporate offices where they deploy repeaters, its almost useless.

I totally understand your frustrations, I have some of my own as well. But I honestly take what I can get with gratitude since I already go on morning walks! I just know to give my phone an extra charge during the day although I do have an Apple Watch and they balance out so its not draining too much of my battery too soon.
This app either is for you or it isn't :)
To be honest with you I have made more by spreading the word but still not enough to get anything as of right now. I just really love the concept and motivation I get from it!

Understood. Battery draining is a big problem with many phones. So, yeah, that is a concern. Agreed, the sweat coin is better than nothing and it can be tough if there is nothing you may want to buy with those coins. This is a step in the right direction, regardless. I don't walk around with my phone because I hate cancer.

haha i'm tryna get paid to breathe! this is awesome girl. walking is so underrated and like you said it doesn't matter 'how much' because before it was nothing at all. thank you for sharing this @paolajane

Haha thank you sooo much for watching <3

The idea is not new, last year I tried the app Bitwalking that pay you for walking, but turned to be a dead project!

Did you be able to cash out into your Paypal account so far?

Well it is a fairly new concept.. 1 year is definitely not much time haha but thank you for clarifying.
I have not! But I know others who have and love it

Perfect will do sometime soon :)

Yes you do since you're on that health kick haha

'I'm trying to get paid to breath' LOLOL dudeee haha you have that funny side. This sounds cool! will check it out! :D

Haha yes, paid to breathe, yes, wanna do that, wanna get my breathe on.

If all people is walking to get PAID, a lot of people fitness will be are in the world, hehe Nice!

Oh wait, not available in my area. Oh well. Maybe one day.

Cool. Thanks for the ideas.!!

Can I get paid to run while playing basketball? That is what I do, I'm a baller. But this looks great. Good video. Even greater app. From a lovely girl. Thanks.

That is a really cool idea...I'll check it out. Thanks Poala

If you discover how to get paid for breathing please email me immediately. I will be your first sign up! :D

The wife and I were just discussing last week that since our government is now trying to impose a sunlight tax (true story) that very soon they might actually start charging us to breathe also. That app would be a great way to offset that tax :) :D

Looking forward to it! :D

Well this may just be the coolest thing I have seen all day!! haha How awesome! I will check it out! 20k Sweatcoins is 1,000 paypal cash! Crazy!

It will definitely take a while but imagine getting that just for walking? Something we do on a daily basis anyway? Haha

there are many apps for that, its incredible

Shaker👐🏿👐🏿👐🏿 I like the app alot though! And you never have to start it. Only challenge is finding cool stuff to buy on their store, that isn't sold out that is haha. 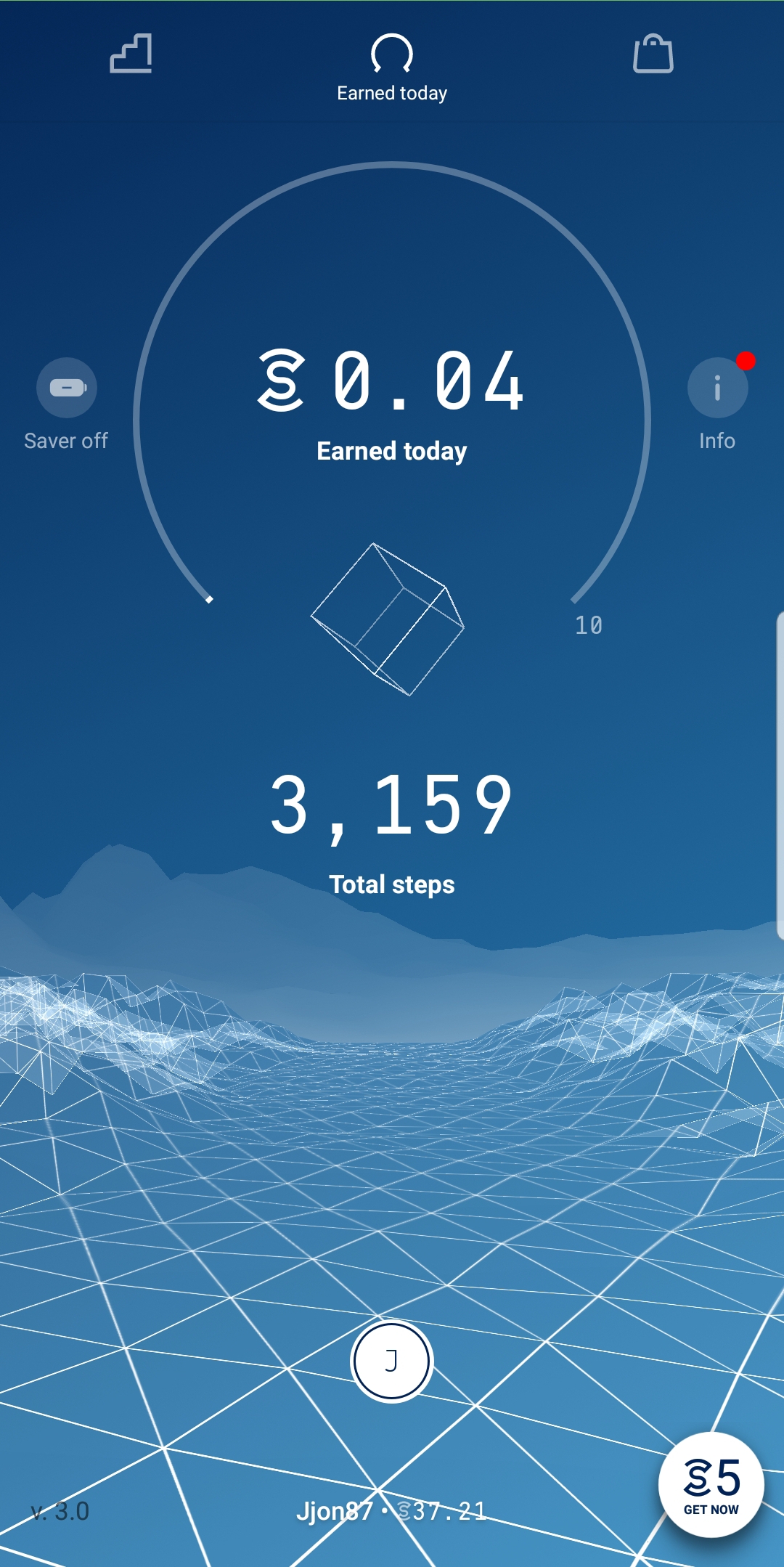 Nice!!! Cool to see someone else using this

I will have to watch this video to see what it's all about but I want to find new apps that involve crypto bc just like you I think it's fascinating this whole new world we are working towards!

But, I wanted to drop a comment to say that you know that phrase "eyebrows on fleek"? You are the DEFINITION of that in this photo. haha

Available in the US, UK, IE, CA and Australia only.

And where are you? Spain?

I’m sorry the app isn’t available in your area :(

Sounds really awesome. I actually walk quite a lot so this should make me ball out of control!! Thanks for the expose @paolajane. Can't wait for them to get blockchained up!!

Thank you so much for sharing! I just downloaded the app.

Just started using it today. It seems pretty self explanatory and super simple to use so far. So far today ( while unfortunately at work) I earned .78 :) The only thing is I keep closing the app instead of letting it run in the background.

Wahhh it's not available in New Zealand yet... we walk too!!!! Can't wait to use it. My dog is going to love me even more! Thanks for the info x

Wow this is Amazing!

I'm definitely going to check it out ASAP!

What? Getting paid while walking or doing uninteresting things...great! Definitely want more about this app. I have been using strom play app and earning little by performing microtasks but that app require you to visit the app frequently but this is great.

Definitely watch the video if you want more info, I explain it a bit!

The media could not be loaded, either because the server or network failed or because the format is not supported...Getting this error message Will be using the app very soon. Keep up the great work!!!

It actually sucks in my opinion. I had if for a few months but you basically only get discounts to products. The only way you can get paid with paypal is with referrals. You should try the app achievement, i think its much better.