Traveling to Southeast Asia: Motorbikes and Waterfalls in Pai

The bus was supposed to pick my friends up between 8am and 8:30 and me between 8:30 and 9am. Of course my luck with buses struck again and I got picked up at 8:30 straight, but Moritz and Lena weren't in the bus. I got a little worried, that they missed it but it turned out that the driver simply mixed up his schedule. As I had found out earlier these buses were infamous for making people sick. Some people even claimed that it was unusual for a ride to go without at least one person puking. Nonetheless I hoped to get a few minutes of sleep on the bus. 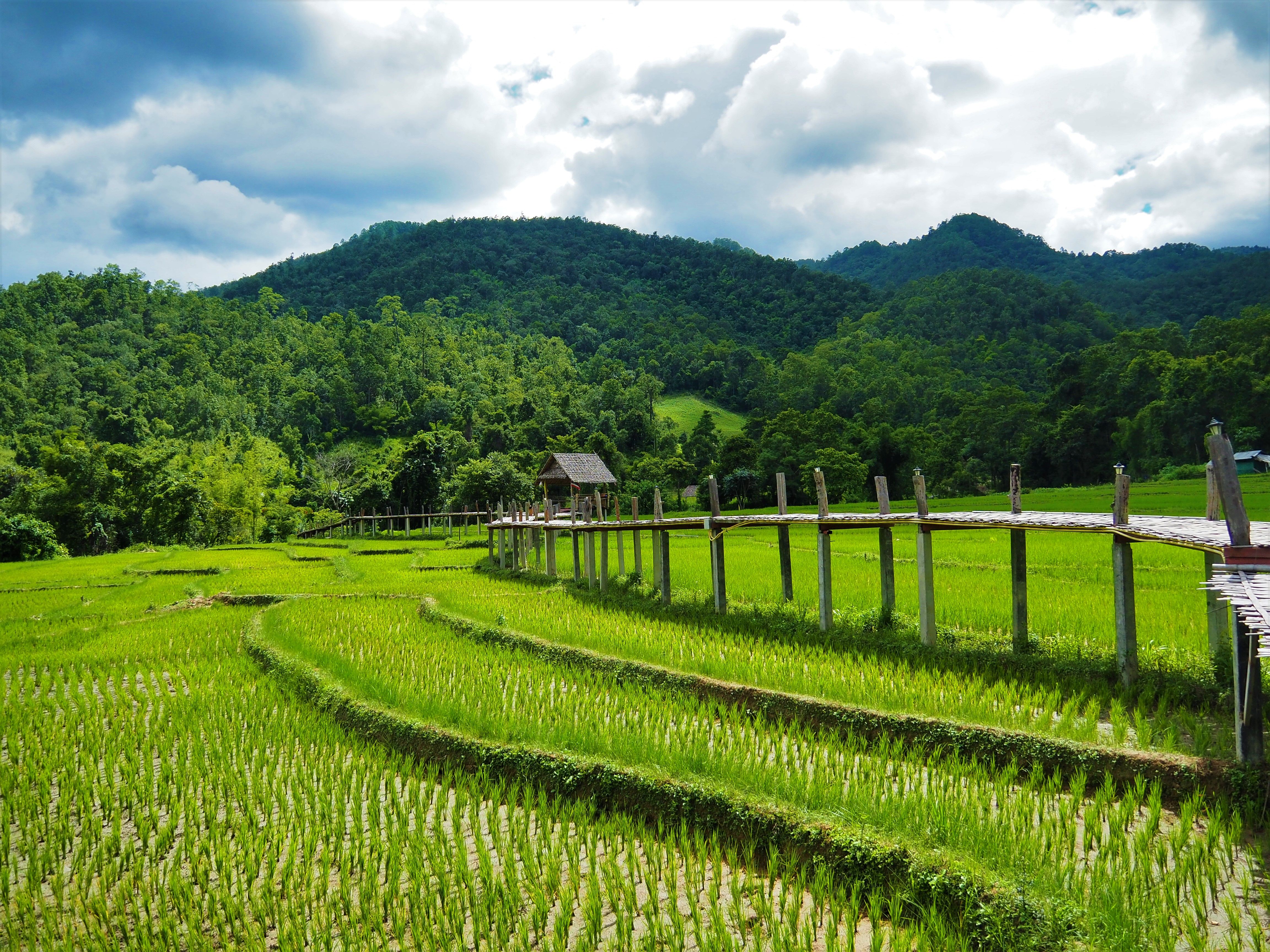 Sitting in the back of the bus I began to understand pretty fast. The beginning was just ordinary flat straight street, but in order to get to Pai one has to climb some mountains. However when the streets got steeper and the turns sharper the bus driver showed no intentions of getting slower. Sleeping was no longer an issue, I had to keep myself from falling off the seat instead.

After the roller-coaster ride through the mountains we arrived in Pai at about noon. Moritz and Lena weren't on such a tight budget as myself, so they had gotten themselves a nice bungalow in a resort right out of town. I just went to the place next to it, a very nice and cheap hostel with a lot of nice places to chill. 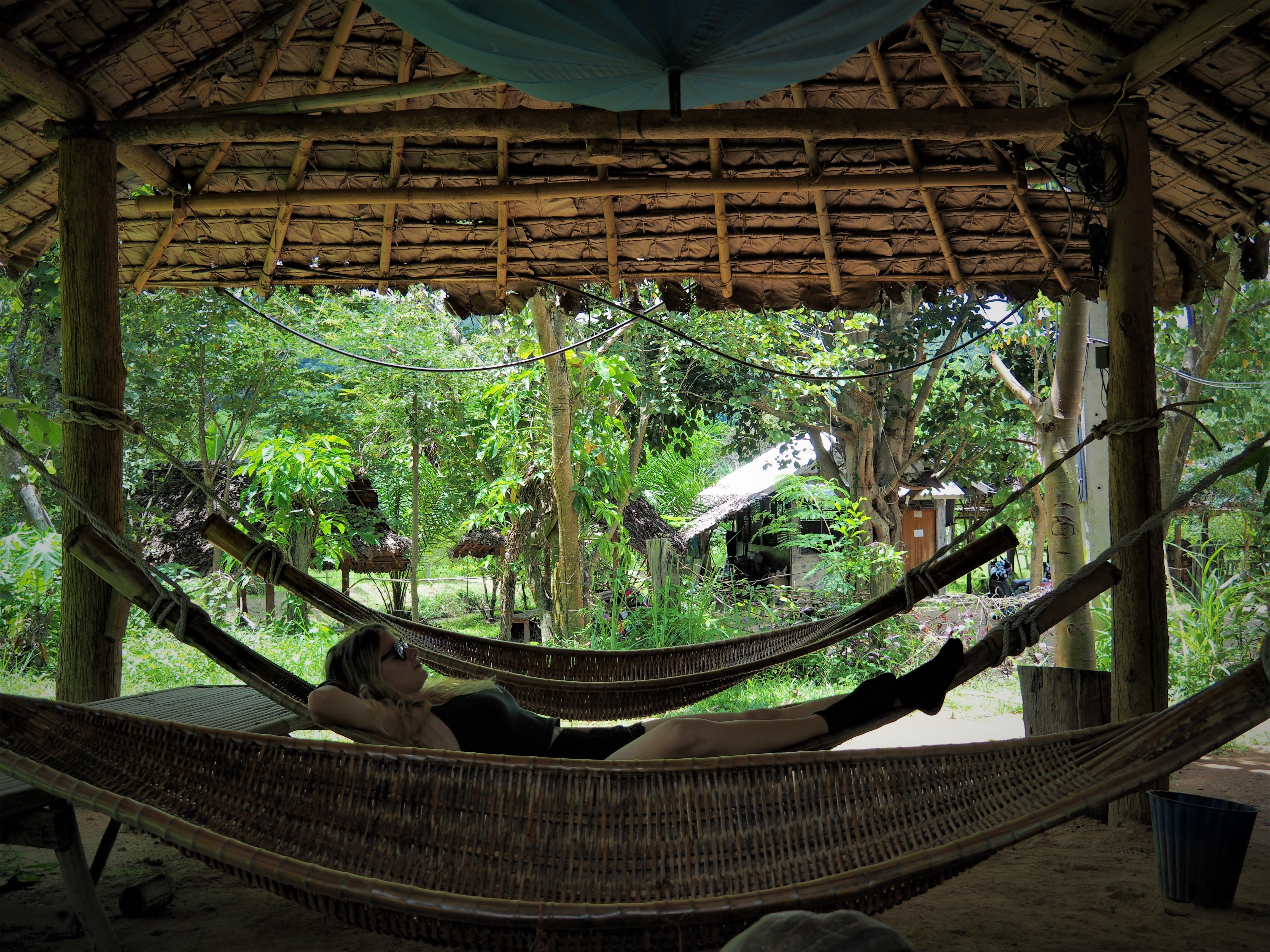 Perfect location to shoot some Instagram pictures to make everyone else jealous
1/160 Sek. f/4,5 16 mm ISO 200

When you go to Pai you ether come for the Hippie-vibes (and the accompanying substances) or you come for the great nature around it. We hadn't come for drugs so we had to get some scooters since none of the nice places were in walking distance. The problem was, that Moritz and Lena both had never driven a scooter before and my first time was just two weeks before in Myanmar.
We tried to keep the risk as low as possible, so we just got two scooters and either Moritz or Lena was sitting on the back of mine while the other one drove alone. 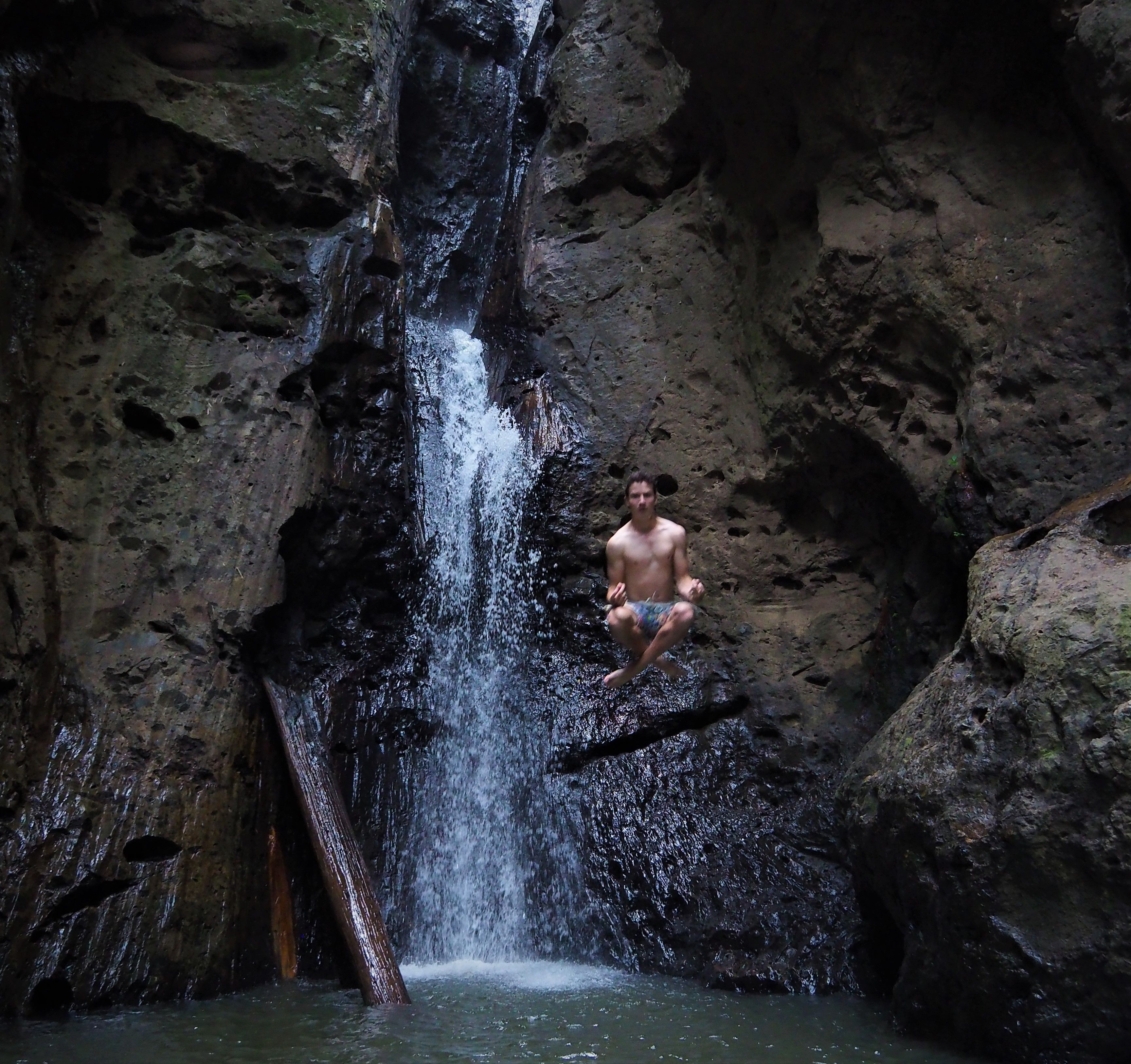 On our first day as a #scootergang we visited the Pam Bok waterfall and the Bamboo bridge. But before we got to the waterfall we came across the "Landsplit". It's a place where someday out of nowhere the earth split apart leaving a huge crack in the field of a farmer making it impossible to farm the land. The farmer however found a neat solution to his huge problem: He started growing bananas, sweat potato and some other fruits in a small scale on the remaining land and offered it for free to the tourists, who came by his land on their way to the waterfall. In return he only asked for a small donation. To this day I am amazed, that this worked out so nicely. He is running it so well, he had his own entry in my guide book! 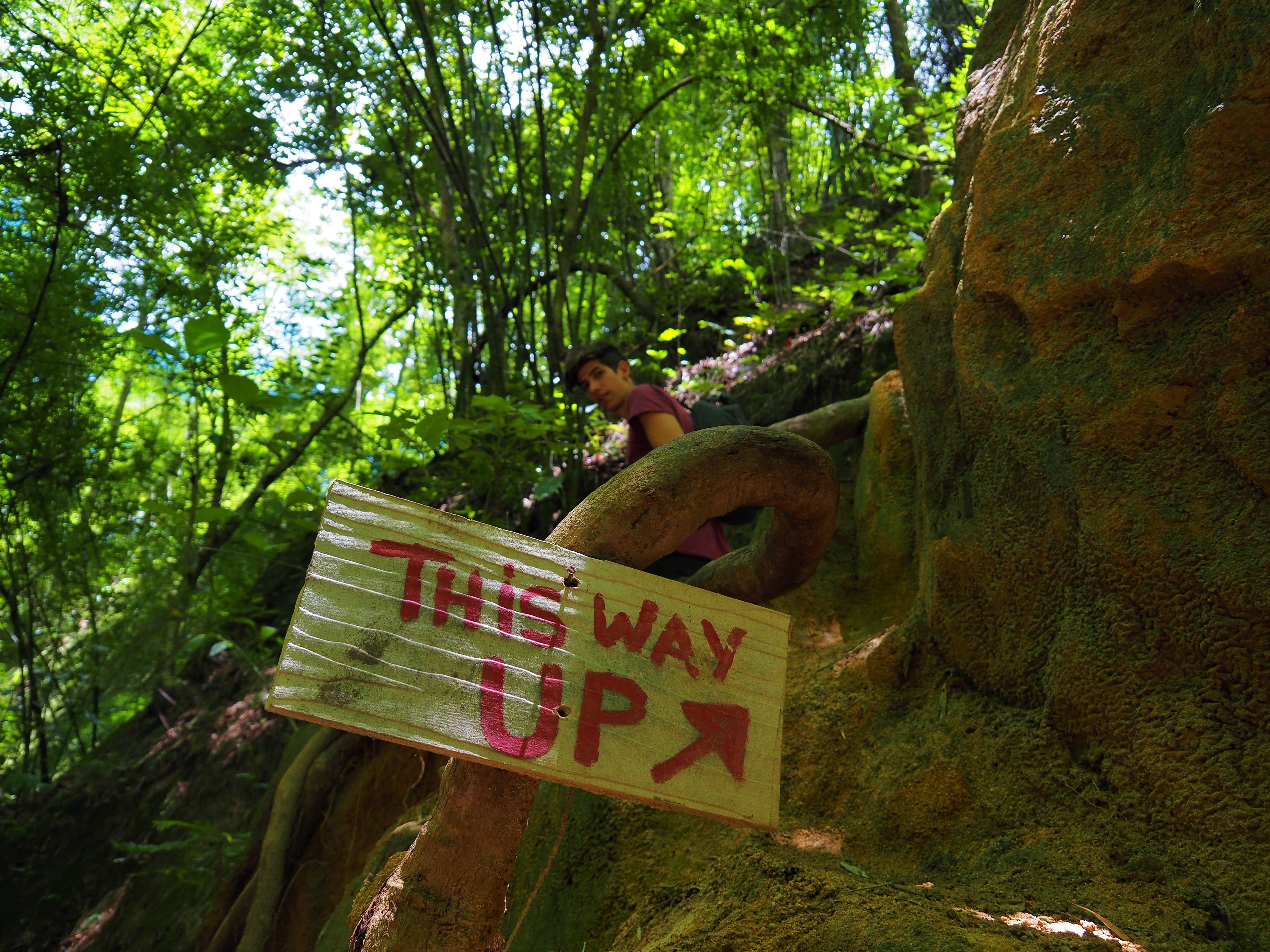 The waterfall and especially the bamboo bridge where unbelievable beautiful! I won't even try to describe, let the pictures speak for themselves. 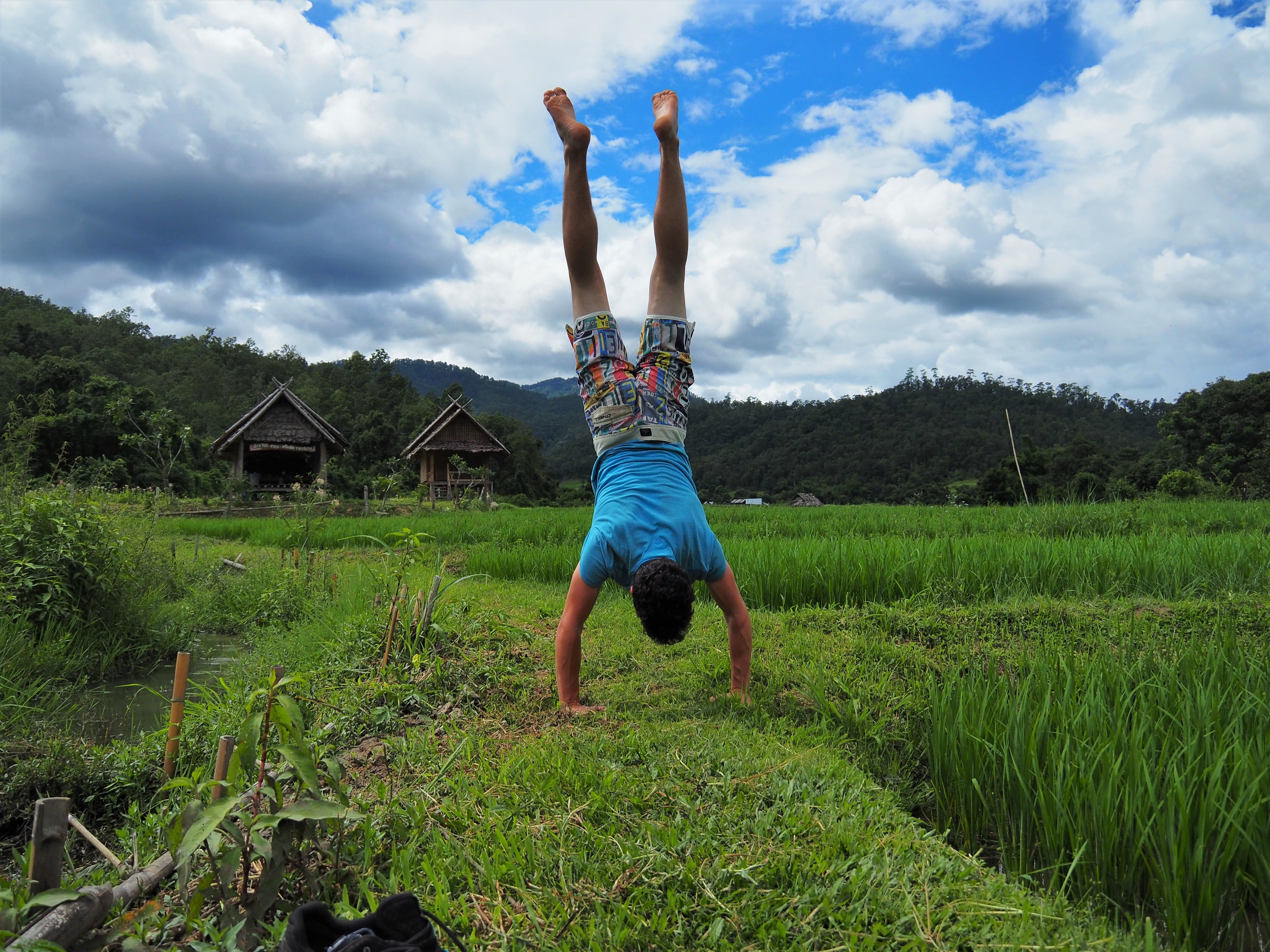 Getting lost in the dark

In the evening we tried to catch the supposedly amazing sunset from the "Pai Canyon", but it was raining the whole time so all we saw was the rainy landscape getting darker and darker. Amazed by the strange structure of the canyon, (I would call it inverted canyon) we wanted to explore it a little more despite the rain. 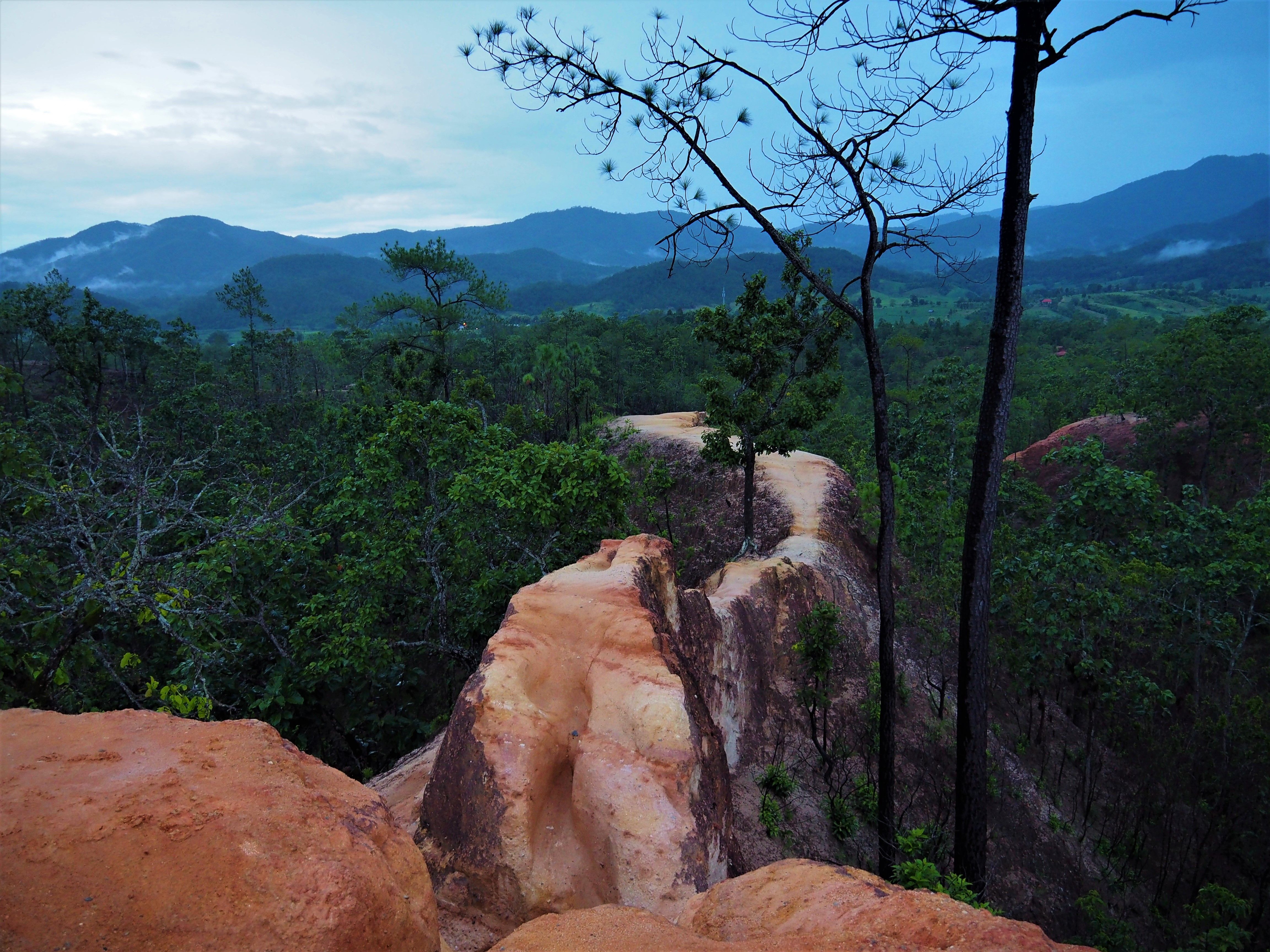 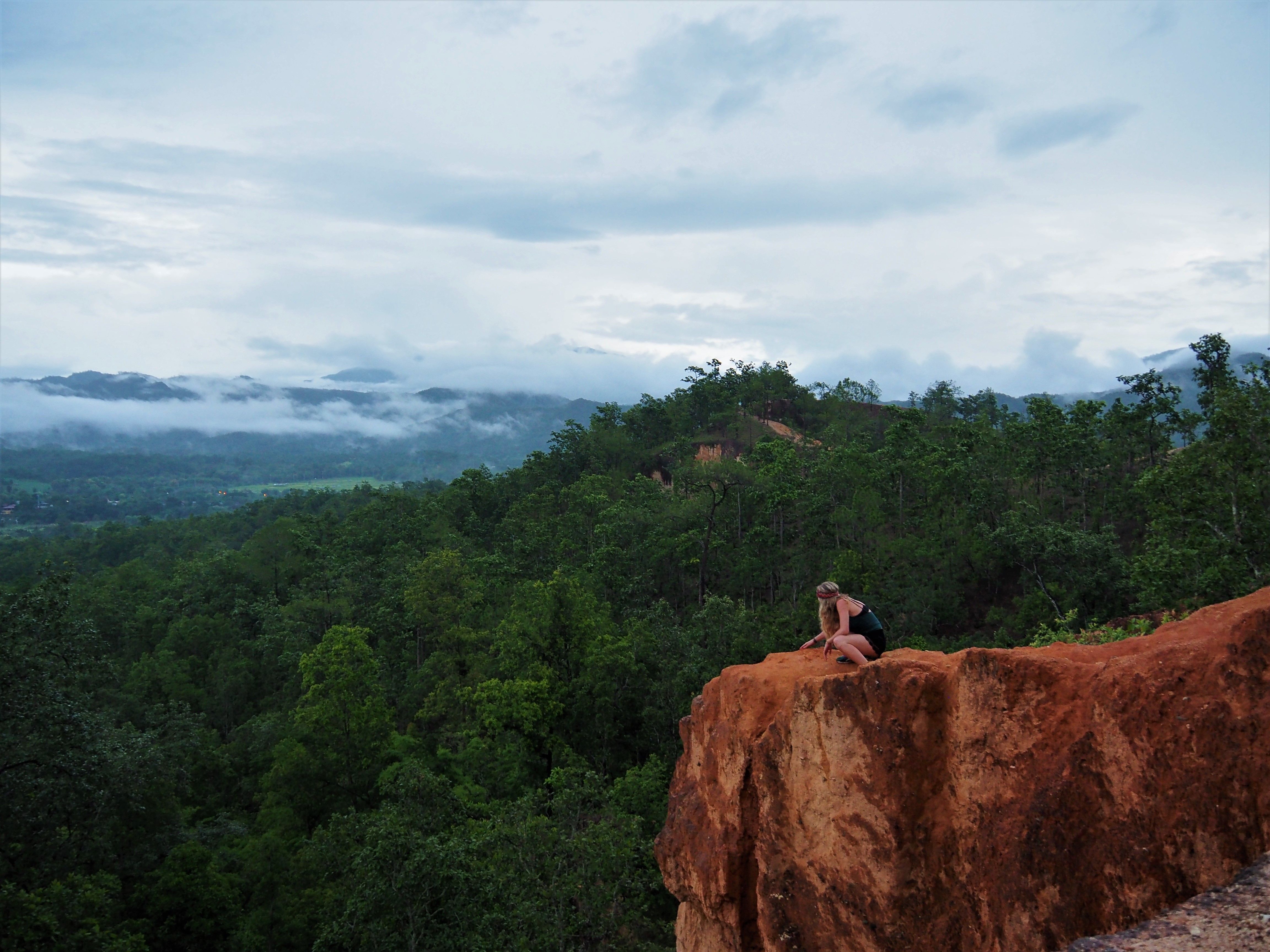 Not wanting to come back the same way we came we agreed on circling back. In order to do so we had to follow the canyon down and go up again somewhere else. As we followed the path back up, I started to wonder why the walls to our sides where getting higher and higher, but the path kept flat. Eventually we ended up in a dead end and realised: We had been following a dried up creek the whole time!
By now the sun was long gone and it was starting to get really dark. In the increasingly heavy rain we scrambled up the side of the canyon sliding down every now and then with our phones as the only light source. I have to admit, it was great fun! Back at the drenched bikes we ran into the next problem. One of our scooters just wouldn't start! We all tried several times but the lock seemed to be broken. After what felt like forever in the dark rain we turned to a Thai, who was just walking nearby. We actually just wanted to ask her for her phone to call the renter, but she understood right away what was wrong. Of course she had to try as well, so we let her. She tried and it didn't work. "See it's broken", what was I was about to say, but that very moment she tried again and suddenly the scooter came to life! 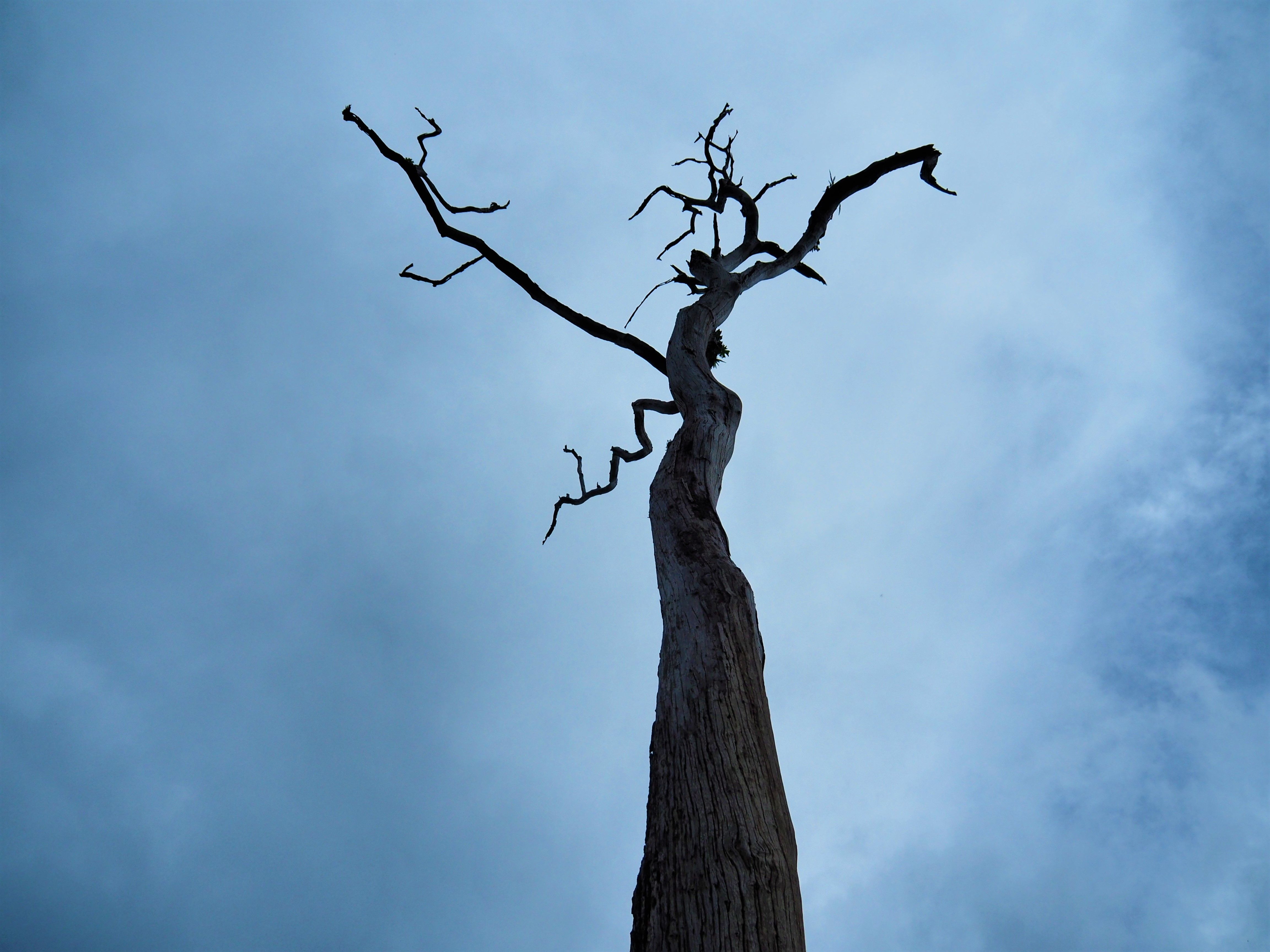 It turned out that most Thais know their way around motorbikes, not surprisingly given the amount of bikes driving around in Thailand.

Having so much fun on our first day on two wheels we rented the bikes for another day right away. This day we wanted to check out anther waterfall, but it was a little cold and overcast when we got there so none of us wanted to go for a swim. As if someone was trying to drive that point home ten minutes after we arrived it started to rain like crazy. Under the roof of a food hut (calling it restaurant would be quite a stretch) we waited the rain out. Lena made friends with a cute dog there. Until she realised, that he was only so kind to her because he wanted her food. 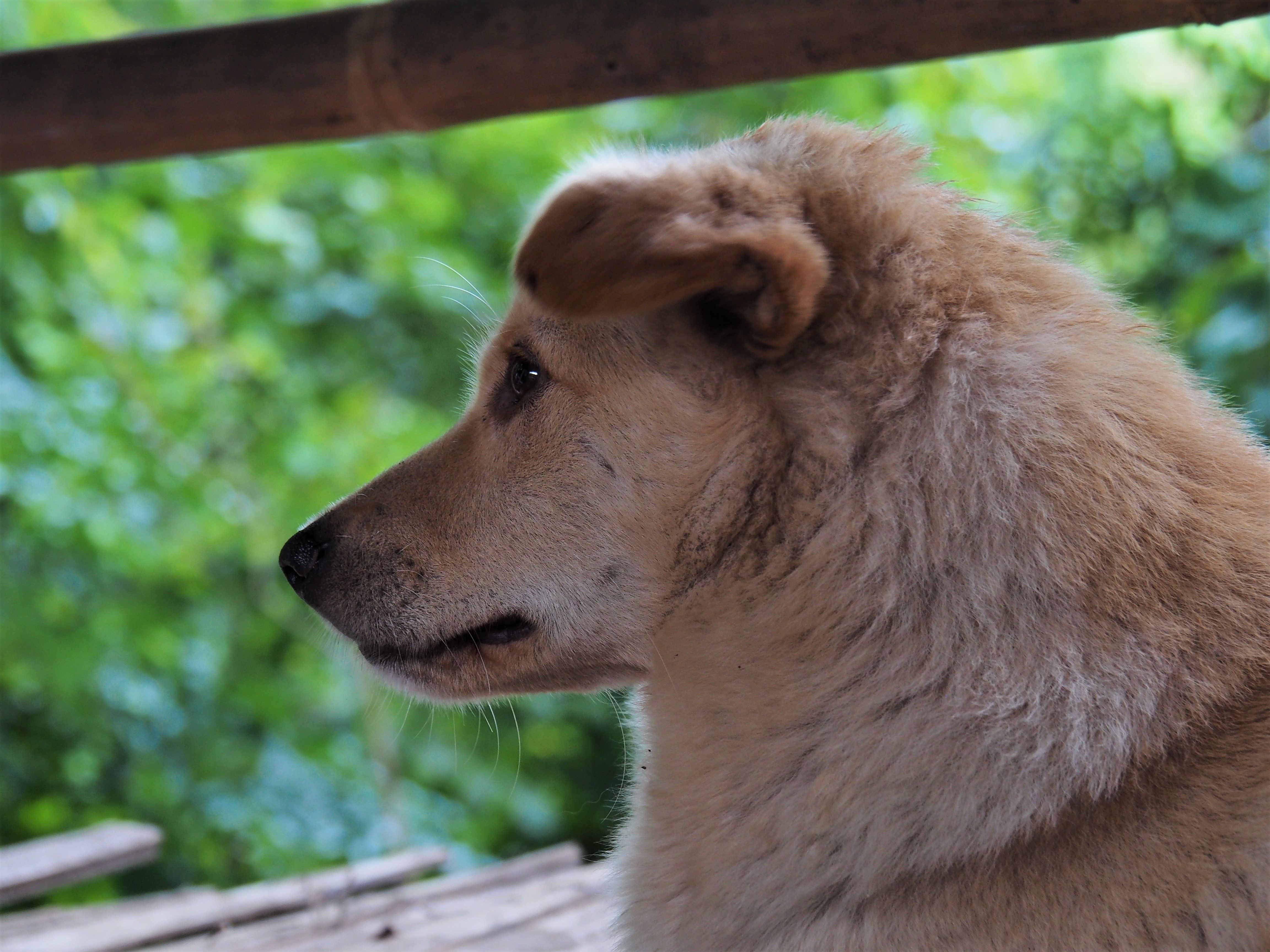 After the rain we visited a huge white buddha on the edge of Pai sitting on the hillside and watching over the valley. The view was great! Trying to get to yet another waterfall we came across something that made me think we traveled back to the 70s. Beyond a bridge made of a few tree trunks there was a place with improvised huts and tents with lots of people dancing away to quite strange music. 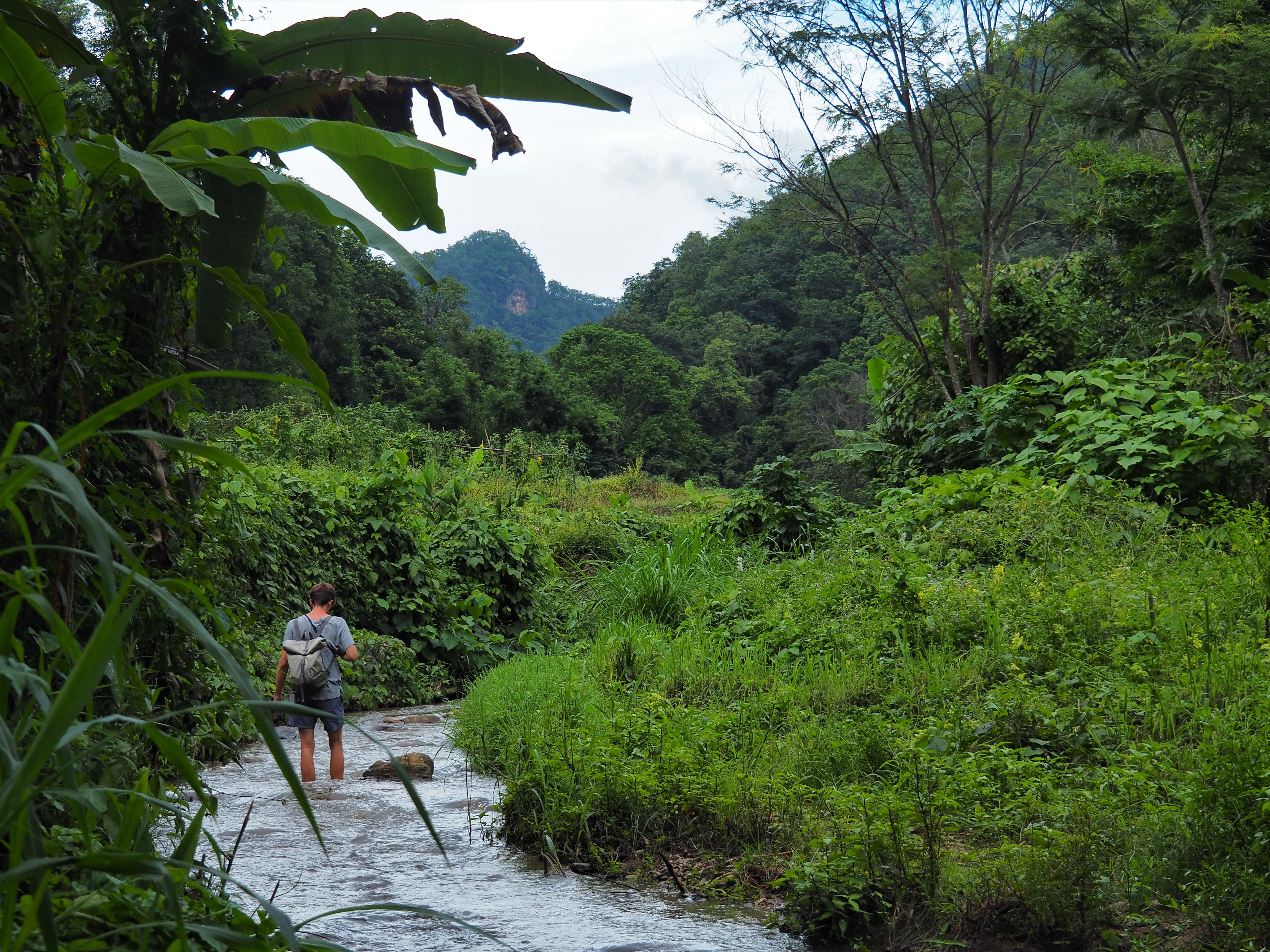 Sadly Lena and Moritz had to catch a flight the next morning from Chiang Mai, so they couldn't stay any longer. I joined them on the bus back to Chiang Mai, I still had quite a list to go through in my limited time so I couldn't afford to stay here for a week like a lot of people do.

All shots in this post were made with my Olympus OMD EM-10 Mark II with a 14-150mm lens in manual mode.

If you want to learn more about my travel through southeast Asia you can read the previous posts here:

There is a new chapter coming each Thursday

If you want to know more about me check this out:

Thank you for reading and feel free to upvote, resteem & follow me :)

travel blog photography thailand ocd-resteem
3년 전 by bypaul58
$37.44
98 votes
댓글 남기기 31
Authors get paid when people like you upvote their post.If you enjoyed what you read here, create your account today and start earning FREE STEEM!
STEEMKR.COM IS SPONSORED BY

Incredible post! This post felt like reading a very well-written short novel. I don't know if that possible but if it is, this will be up there. Great writing skills and the photographs are just breath-taking. I envy you! Looking forward to most posts by following you!

I went there 2 times when I was living in Thailand. It's not the best place to visit but it's definitely a lot of fun! I stayed at Spicy Tao, got eaten alive by mozzies and spent the days driving around waterfalls and the canyon!

It definitely is! Luckily my hostel had nets with no holes at all so mosquitoes weren't an issue for me.

Wahnsinns Artikel!!!! Ich vermisse SE Asien so so so much

This is a cool post @bypaul. You describe the perils of backpacking well here. There's always a story in these kinds of places.

Love the random yoga shots too.

Thanks :D
I thought it delivers a much better message to tell the stories behind the pictures. It's actually pretty funny to go through the pictures again because sometimes I remember stuff I had already forgotten.

Ha! never fail to impress and inspire me. I so want to set my foot out there and with just a backpack. I wonder tho where you are at the moment? still in SEA?

Glad to hear that :)
Getting out there is never a bad decision! Currently I am in Vienna, my hometown. I am working on my Bachelor so I can't travel all the time unfortunately :(
The next big trip will probably not happen until summer.

I see :) would love to use these tips as a travel guide ! I know right, I have my exam coming up but still a flaneur blockchain :D

Don't hesitate to contact me if you need some further information about any of the places I wrote about :)
There is still a ton of stuff I didn't mention, because it would have been too much for the blog

@bypaul, you just received an upvote powered by smartsteem. Our goal is to support quality posts and authors on steem.

Everyone is invited to be a part of and to join the smartsteem community: https://smartsteem.com

It was indeed quite an adventure! And the landscape was lush with green.

I have heard so much good things about Pai, it's indeed truly beautiful..

You should really visit it, if you are at your home country, it's not very far from there :)

it's indeed very near! currently not at my home country at the moment... but will surely visit very soon..

Congratulations! This post has been upvoted from the communal account, @minnowsupport, by bypaul from the Minnow Support Project. It's a witness project run by aggroed, ausbitbank, teamsteem, theprophet0, someguy123, neoxian, followbtcnews/crimsonclad, and netuoso. The goal is to help Steemit grow by supporting Minnows and creating a social network. Please find us in the Peace, Abundance, and Liberty Network (PALnet) Discord Channel. It's a completely public and open space to all members of the Steemit community who voluntarily choose to be there.

You got a 6.46% upvote from @upme requested by: @bypaul.
Send at least 1 SBD to @upme with a post link in the memo field to receive upvote next round.
To support our activity, please vote for my master @suggeelson, as a STEEM Witness

This post has received a 2.41 % upvote from @booster thanks to: @bypaul.

Consider yourself lucky. I went to Pai for a couple of days and ended up spending a month there. :)