Day two was for Daytona. It's a classic spring break destination, and now I know why!

Sunny and warm, Daytona Beach has restaurants, shopping, clubs, and a boardwalk where all the action happens. My friends and I were surprised at how little beach area there was at high tide, and wondered how anyone could lay out and not get washed away. We wandered downtown and discovered the stretch of beach lined by the fanciest hotels. This was the Daytona Beach I had heard stories about. 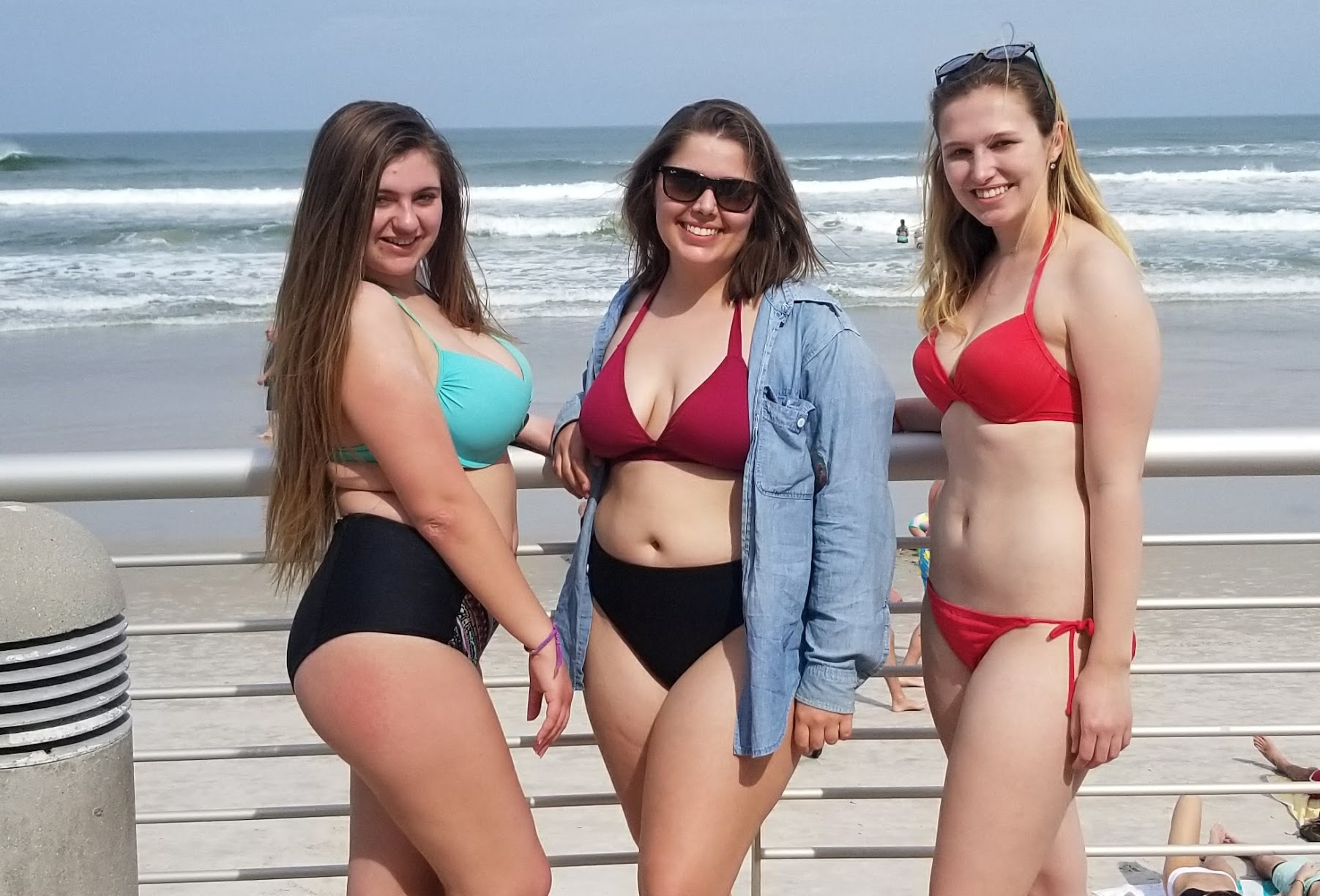 Kelsey, Juliet, and I had a great time there!

The entire area was packed with college students. Tanning, talking, dancing, drinking - you name it, everyone was trying to have a good time. Toward the center of the strip, some frat had set up speakers to blast music. It was like being in a crowded house party without the house.

We danced, we talked to people, and eventually we went to relax in the sun. We got to meet people’s dogs, one man’s cat, and tons of other students. That night, we went out again, and the streets were like a block party, so many people were out and about. Everyone was extremely social, and everyone had something to share.

Two guys we walked with told us the story of how they made it there but were broke because of it -- apparently their flight attendant friend booked their plane tickets for them but messed up. One told me, “I said to get DAB, not DAY! This idiot got us tickets to Dayton, Ohio, so we were on our own.”

Later, another guy came up to us. “Can I walk with you?” he asked. “I lost my friends and they have my phone.” It turned out he was a lost, drunk, gay dancer who didn’t want to walk alone. We were on the way back to our car, so we offered him a ride back to his hotel. He kept refusing, saying that we were too nice but we didn’t have to do that for him. He told us the name of the hotel, saying it was right up the street and he could walk there. We looked it up and it was three miles away, and then it began to rain. I couldn’t stand the thought of him walking in that, and we were determined to give him a ride. Juliet, in a flash of inspiration, said, “Hey, do you want some vodka? Get in our car and we’ll give you some!”

I realize how sketchy it was that we used the idea of alcohol to lure him into our car, but he jumped in when he heard that. We distracted him by letting him play whatever music he wanted, and I drove him back to his hotel with Fergalicious on repeat. That was the end of my time as a well-intentioned kidnapper.

We also met an aggressive Canadian, a pizza guy offering free samples of weed and pizza, and a girl who convinced a pilot to let her fly his plane. Some things were less expected than others. We moved on the next day, but I would definitely hit Daytona Beach for spring break again sometime!

travel life stories photography steemit
2년 전 by ceciliakeirstead55
$1.51
12 votes
댓글 남기기 6
Authors get paid when people like you upvote their post.If you enjoyed what you read here, create your account today and start earning FREE STEEM!
STEEMKR.COM IS SPONSORED BY

Sounds like you had a blast! The party never ends on Spring Break and I'm glad you met lots of people and had interesting experiences. And nice of you to help the lost dude get back to his hotel! :)

WARNING - The message you received from @nazifozkaya is a CONFIRMED SCAM! DO NOT FOLLOW the instruction in the memo! For more information, read this post: https://steemit.com/steemit/@arcange/phishing-site-reported-sleemit-com

This post has been upvoted and picked by Daily Picked #10! Thank you for the cool and quality content. Keep going!

Don’t forget I’m not a robot. I explore, read, upvote and share manually :)

When i saw your photos together with friends i remember my friends in college, its been a long time i didnt see them.

Oranges wake me up in the morning. Love oranges. The energy is unmatched by everything except for maybe a beautiful beach, a shinning sun, and beautiful women. Have not been to Daytona Beach but was in Hawaii. Love your photo here. Love pizza. People were always trying to get me to do weed in the ghetto trailer park I grew up in, in Oregon. Some thought I was on weed or something because I'm pretty enthusiastic about life haha. I told them I save a lot of money. I don't have to get high if I'm naturally already high haha. Thanks for sharing, hehe. I'm Oatmeal Joey Arnold. You can call me Joey.