Himalaya / Abandoned Ashram where the Beatles wrote 48 songs and went on a spiritual journey (15+ Photographs & Article). 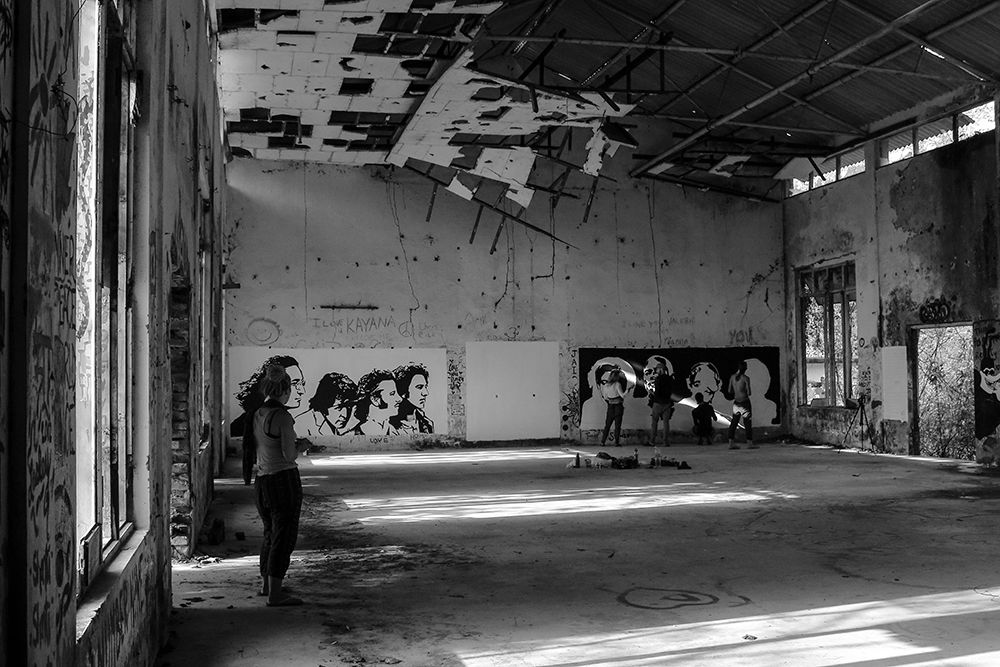 “Nearly 50 years ago this abandoned Ashram in the foothills of the Indian Himalaya, hosted the world’s most-famous popstars on a journey of spiritual awakening that would transform their music forever.”

The Beatles visited the home of Yogi Maharishi Mahesh in 1968, I visited in 2015, however, I imagined the place to look quite different. As usual, I refrained from googling our chosen destination, it was from the whims of the wind that we learnt of it’s existence, which for me and my wife only enhanced the charm and thrill of searching for something so fashionably dubbed ‘The Beatles Ashram’.

(The entrance to the Ashram).

We were tipped that several Indian locals hung around the entrance demanding large sums of Rupee in return for access to the Ashrams grounds. We were also told about another entrance to the back of the walled gardens. This left us with a decision. As we always do we decided to fund the local community, these men were essentially using one of the only resources available to them. In the end that large sum was a measly $10. 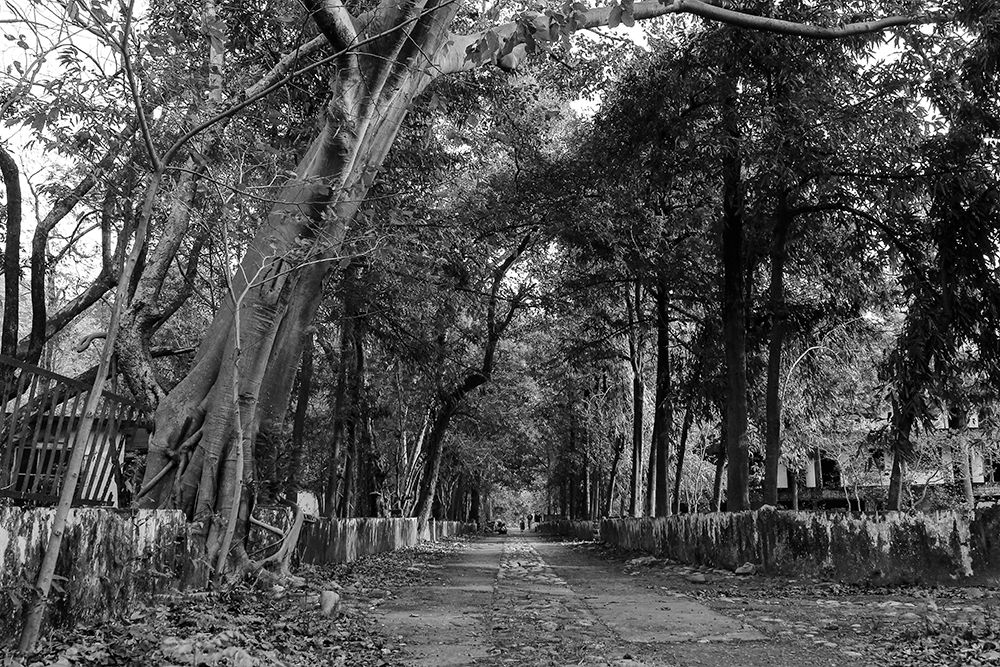 Upon entering you are immediately faced with A twisting cobbled pathway that snakes into the eerie darkness 150ft below blooming Deodar trees. Everything is overgrown spectacularly.

The first structures of interest were a row of stone built hives, which are scattered all over the area. They were used as accommodation for the many students that studied in the ashram. The doom shaped roof on the inside created perfect acoustics for meditation and chanting. It is believed the Beatles wrote 48 songs inside these various chambers. (Accommodation for the students). 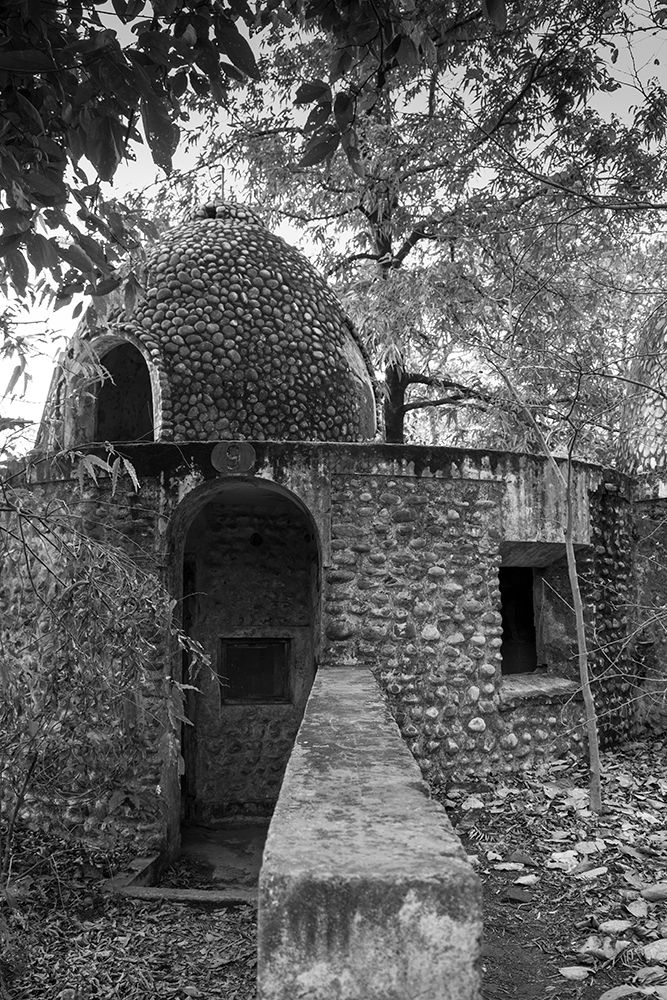 This single acoustics chamber on the roof of the biggest building in the Ashram was surely used by the band regularly. It is the most fantastic piece of engineering on the whole complex and built entirely out of white marble. We spent about an hour in here singing Beatles songs...

(White Marble acoustics doomused by the Beatles, it's believed most of the White Album was penned here).

In the centre there is building aptly named ‘The Chapel’ and we found people inside! 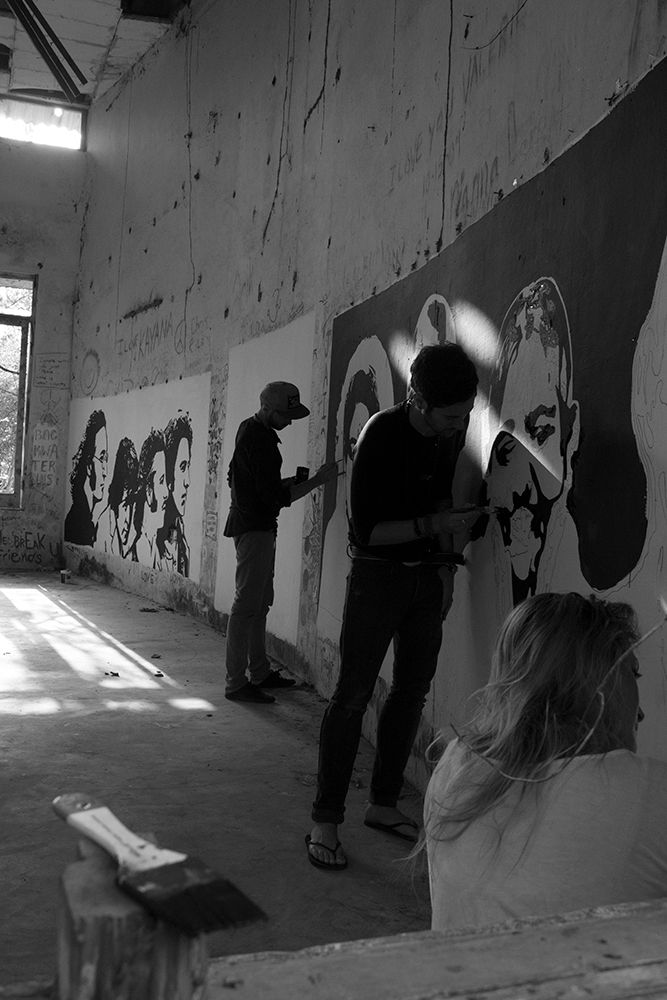 A group of artists from the US who had famously painted a mural of The Beatles and Yogi had returned years later to touch them up. The timing was perfect. A group of Israeli travellers were also there and were playing on hosting a gig inside the Chapel the next night. 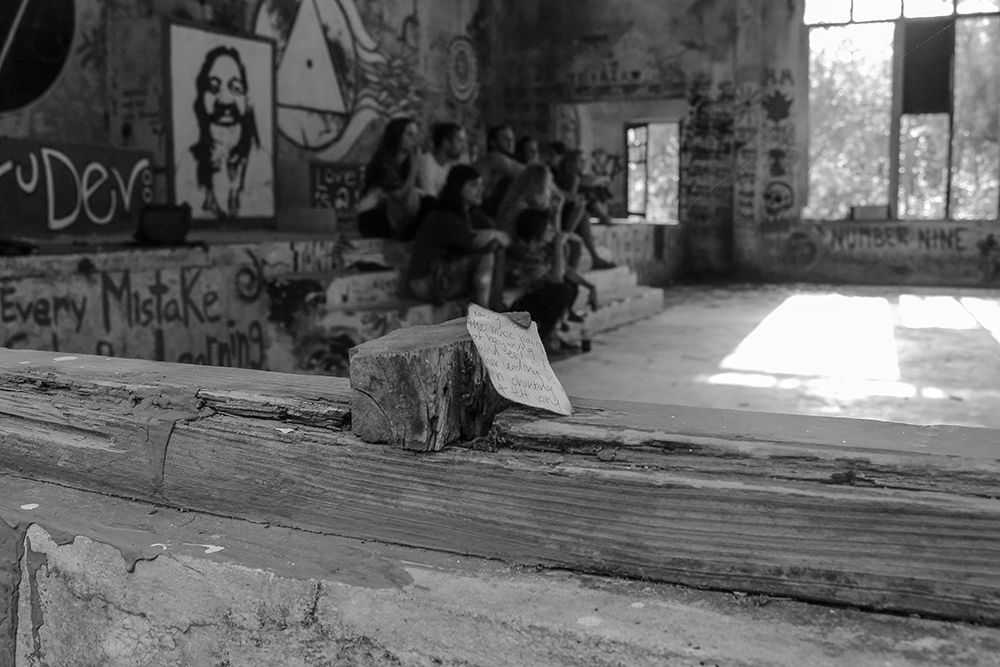 Wandering through the gardens taking these photographs and observing all the graffiti gave me a strange nostalgic sensation; it took me back, as if I was a part of this place when it was booming in the 60’s. I could see all the faces, hear all the voices, the music, the chaos and feel the highs. To be fair, perhaps it was the Hashish… (The inside of one of the acoustic dooms). 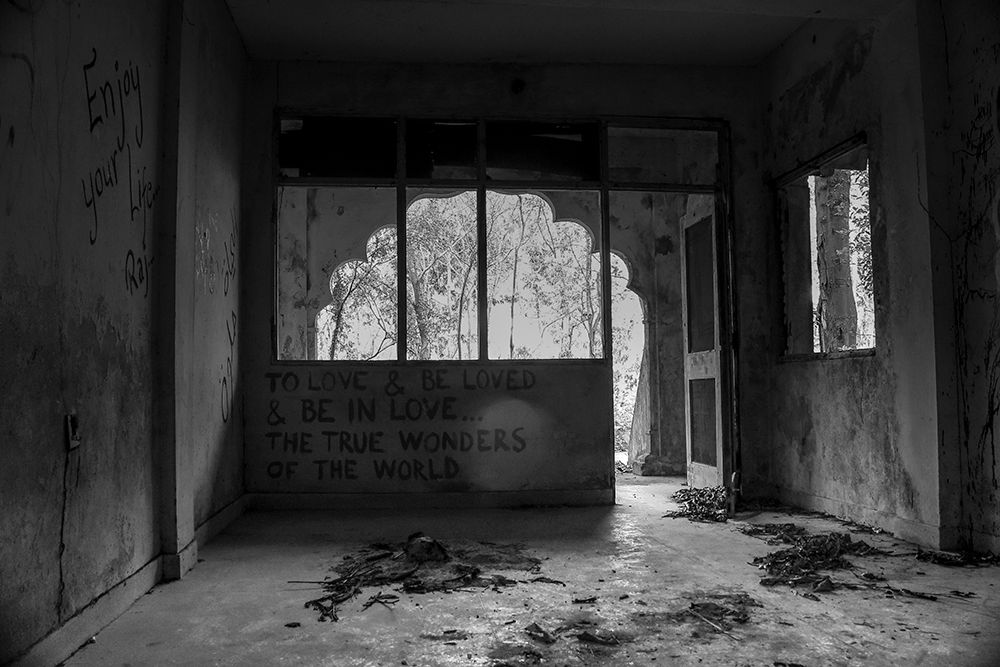 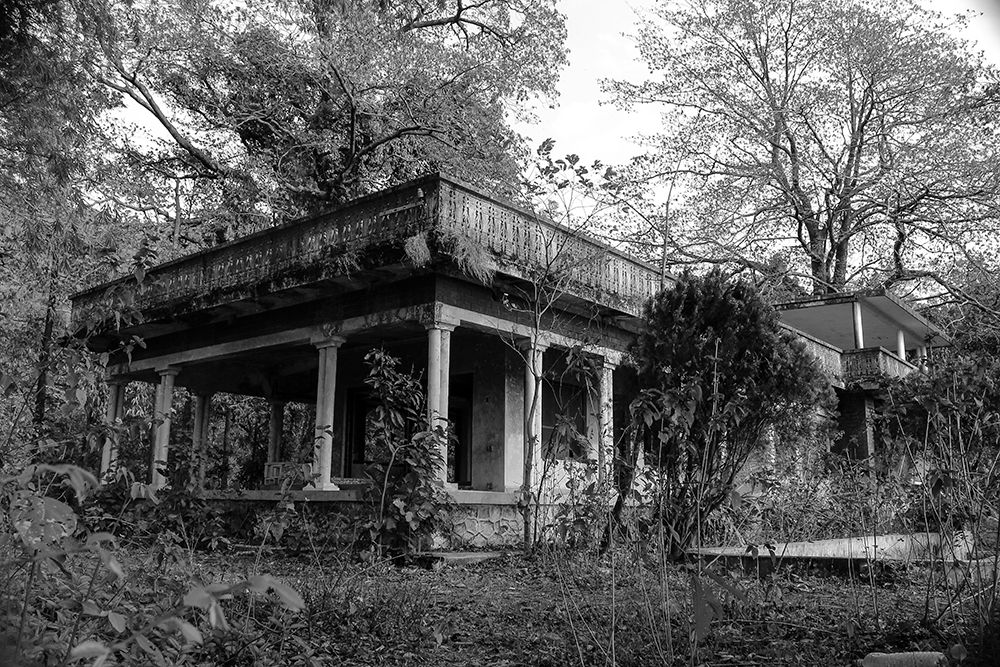 (One of more grander building on the property, with a swimming pool). 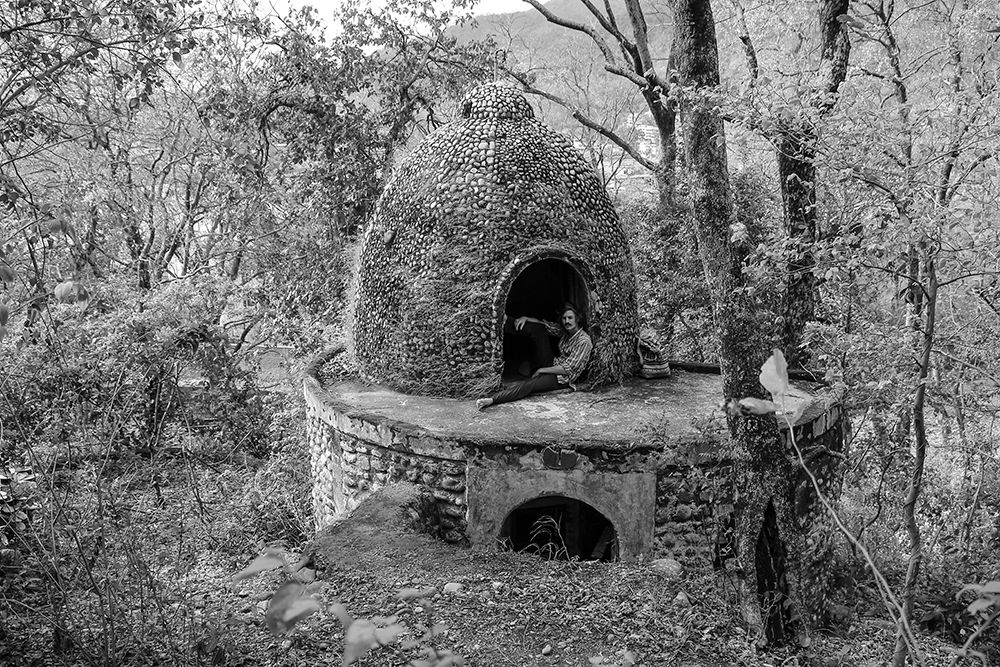 travel music photography story art
4년 전 by cottonlazarus65
$48.64
111 votes
댓글 남기기 27
Authors get paid when people like you upvote their post.If you enjoyed what you read here, create your account today and start earning FREE STEEM!
STEEMKR.COM IS SPONSORED BY

Thank you for sharing this with us, I am eternal fans of the Beatles.
Upvote and Restreem

wow they have become incredibly liberal with letting people in there. When i was there 10 years ago we had to sneak in and i got chased away at one point by a guard with a machete. it was pretty funny actually.

Haha. When I was there it was still technically illegal. It has now been opened to the public i believe.

The B&W photos added a lot to this post. Thanks for the history lesson as well. Strange that it's in a state of decay considering it's importance.

Sadly there is an abundance of places like this scattered all over India.

Music is such a spiritual tool. It affects everyone. More artist on spiritual breaks would be nice for the music industry.

What does the quote say? Happiness is only real when shared?

Yes. It was the last thing Christopher McCandless wrote in his diary before he died. There is a good film called In to the Wild if your not familiar.

Excellent post! Thanks for a great series of photos and commentary on your trip. That was one corner of India I wanted to see, but did not make it up there on my visit. Amazing that the Beatles still loom so large.

Cheers!
Thanks for tip too.

I lived in Pune for most of the year and goa for 4 months. Was able to make a few week long excursions too. What parts did you visit?

Oh, mine was a 5-week trip and probably 15 years ago. I did the Northern India tourist circuit and made a few stops of my own, but got sick in Rajastan and wasn't able to see quite as much as I'd hoped. Would love to go back some day and see more.

Cool. I don't miss the toiletry side of India either. Haha

Great photos. Always wondered what sort of conditions the Beatles stayed in whilst in India. Did you feel or sense a presence? Many thanks for the post.

Yes for sure. The place has a magical feel to it. When you know specific people have been in specific places this can happen.

Great photos of a piece of musical history.

"To love and be loved" This is nice

Great trip back in history.

Wonderful pictures! What an amazing location. I love the phrase "To love, and be loved, and be in love... the true wonders of the world". Thanks for sharing!

No worries. Always a place I recommend to anyone visiting India!