Summer 2016 when my family decided to take a trip somewhere far from where we live. We usually go to Batangas to relax as it only take about 2-3 hours drive from home. We searched the net for places to go and we give our preferred places. They say Ilocos, Baguio, and some other tourist spots here in the Philippines. I suggested Bicol and they say they'll consider it. I was hopeless as most of them voted for Ilocos so I just dismissed it and I just let them to decide. I choose Bicol because I read so many good stuffs about it on the internet and the beaches there are too good to be true so I wanna experience it myself. The day of decision making came and I am so shooked about the decision. Bicol it is.

We arrived at our first stop. Pamplona, Camarines Sur.
We took some rest before we resume our tour. The places we visited are listed below:

1. Our Lady of Peñafrancia
Our Lady of Peñafrancia (Spanish: Nuestra Señora de Peñafrancia in the Philippines, and Nuestra Señora de la Peña de Francia or Virgen de la Peña de Francia in Spain) is a wooden statue of the Blessed Virgin Mary venerated in Naga City, Bicol, Philippines. The image comes from the original image enshrined in Salamanca, Spain. It is currently housed at the Peñafrancia Basilica where every September is held for the novena festivities in honor of the image as the principal Patroness and Queen of Bicol.

Pope Pius XI granted the image a Canonical coronation on 20 September 1924 via his Apostolic delegate, Monsignor Guillermo Piani. On 3 December 2015, a mosaic image of the Virgin Mary under this title was officially enshrined at the Vatican Gardens for the 14th slot at the pontifical mandate of Pope Francis. The ceremony was attended by the President of the Philippines, Benigno Aquino III who unveiled the image with honors. 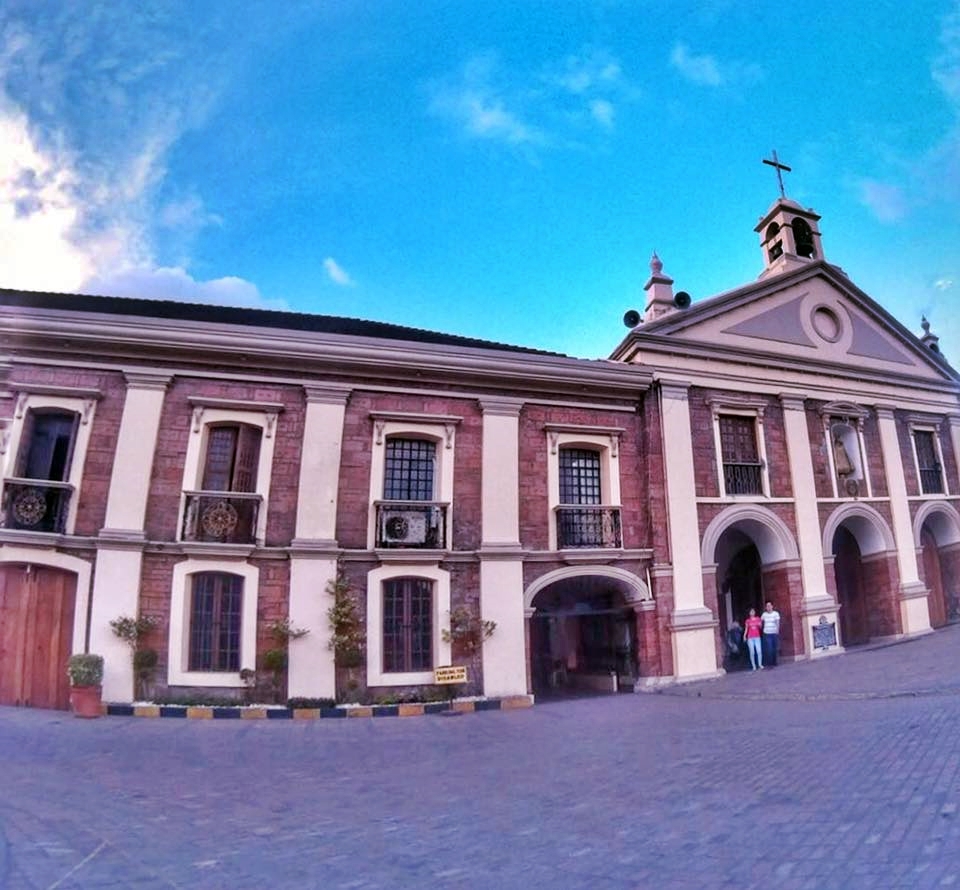 2.) Unknown WaterFalls
I forgot the exact name of the falls, but I can say that this falls is a little bit famous as the place is so crowded. When you seat below the falls and let it hit your back, it feels like you're getting some good back massage. And they say that waterfalls is miraculous in any way. This day is a little bit fun and adventurous. We made it all planned but the weather didn't seems on us. We planned to go to this famous beach by land but didn't happen. So we got a plan B, we decided to go there by sea. We rode a big boat that can accommodate about 50+ passengers. After two and half hours of butt numbing boat ride, we arrived at our next destination. Caramoan Island.

Caramoan Island is located in the lower eastern part of Camarines Sur in the Bicol region of the Philippine archipelago.Itâ€™s a first-class municipality, a rugged place of land extending into the waters of the Maqueda Channel on the north and east and Lagonoy Gulf on the south. It has a 4,000- hectare limestone forest well endowed with a rich diversity of flora and fauna. It boasts of having perfect white sand beaches, tranquil lakes, deep caves, coves and rich marine life. Great ocean adventures for kayakers, snorkle and scuba dive to experience the diverse marine life, trek and search for the enigmatic lagoon, rock climb the limestone cliffs, explore the caves or just star gaze at night.
The Caramoan peninsula possesses an array of majestic natural wonders, where you can can get up close and feel the serenity of nature, itâ€™s the perfect place for your dream vacation getaway.
Truly It's More Fun in Caramoan!

From the entrance of the island (which are the hotels and inn), we took our island hopping trip started from the nearest island to the far.

1.) Lahos Island
The white sand is situated between the two huge limestones. Lahos comes from the Visayan word "lahus" which means you can pass through and throught. This is exactly the description of the island. It is easy to pass from one side of the island to another. The island is a private property of the Bicharas who happens to be a prominent politician in Albay.
You might already seen this on television so many times as the challenges in the TV show Survivor are performed. 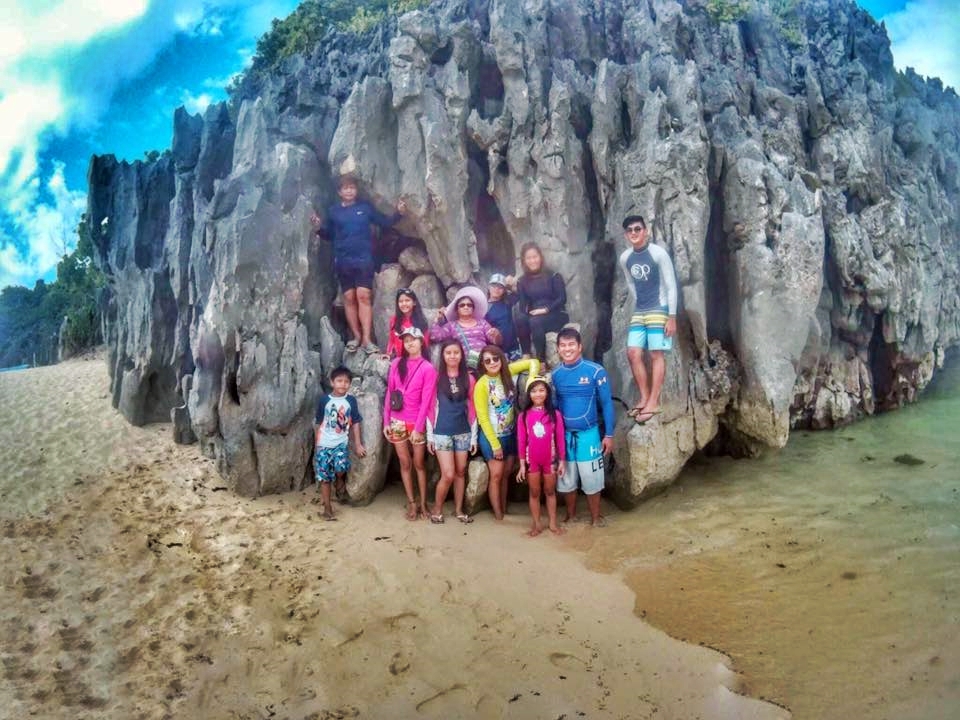 Me and the stunning rock formation of Minalahos Island 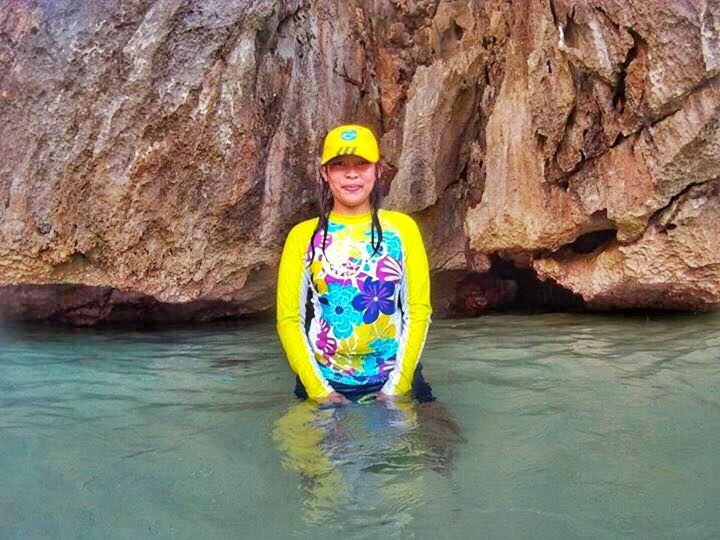 3.) Matukad Island
Matukad Island is one of the places and attraction which is ideal for island hopping. It is included as the most popular island destinations in Caramoan. Matukad Island is where the tribal council in the TV show Survivor is being held. It also has a small lagoon with an intriguing legend. The mystic bangus or also known as milk fish.

The Story of the Mystic Bangus
According to folks, long time ago there used to be two fishes in the lagoon until a fisherman caught one of those to fed his family which unfortunately has caused the death of everyone. Since then, no one dared to catch the remaining fish.
The top lagoon offers a great scene of the island with an inviting dive-look of crystal clear water below. Also, climbing the triangular rock at the bottom of the lagoon will give you a closer look at the bangus and a unique picturesque of "I conquered Matukad lagoon". This is the Lagoon 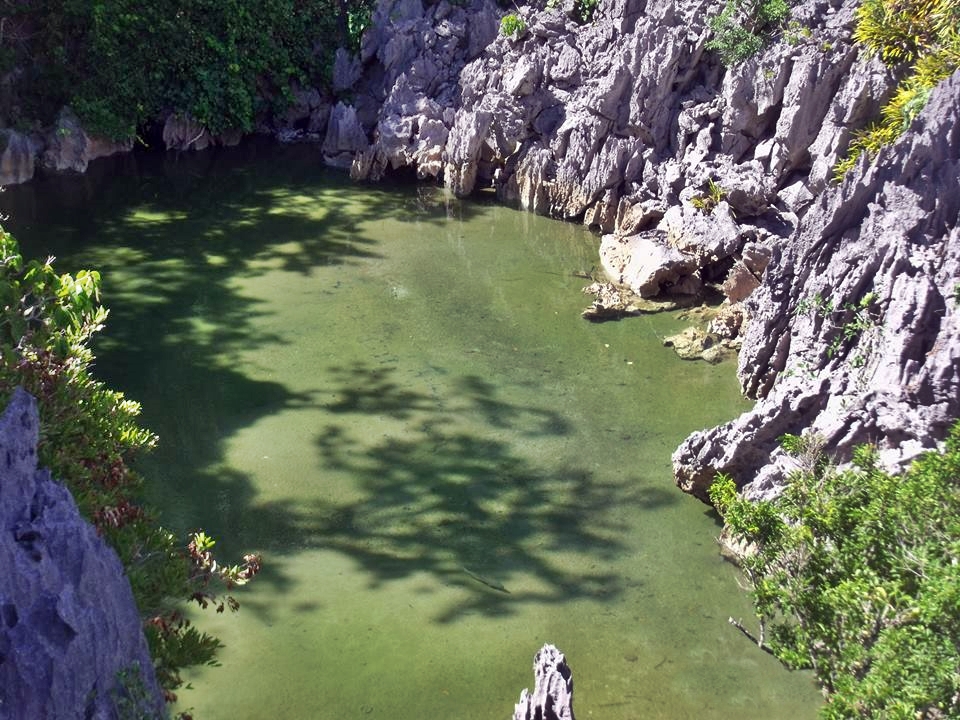 4.) Cagbalinad Island
Cagbalinad Island is where we decided to spend our remaining hours before we call it a day. Why? Because there's so many fishes, and other beautiful sea creatures. When you look under, you can easily sight a school of different fishes.

** Some shots from under water. (sorry low quality. I just screenshot it
from the video I took)** On our third and last day, we decided to visit one of the famous volcano in the country.

Cagsawa Ruins
The Cagsawa Ruins (also spelled as Kagsawa or Cagsaua) are the remnants of a 16th-century Franciscan church, the Cagsawa church. It was originally built in the town of Cagsawa in 1587 but was burned down by Dutch pirates in 1636. It was rebuilt in 1724 by Fr. Francisco Blanco, but was destroyed again, along with the town of Cagsawa, in February 1, 1814, during the eruption of the Mayon Volcano.

The ruins are currently located in Barangay Busay, Cagsawa, in the municipality of Daraga, Albay, Philippines. It is part of Cagsawa Park and is protected and maintained by the municipal government of Daraga and the National Museum of the Philippines, is one of the most popular tourist destinations in the area. The International Tourism Bourse, one of the world’s top travel trade shows based in Berlin, has even recognized the site as one of the places to visit in Asia.

Me and my family and the Cagsawa Ruins in the background. 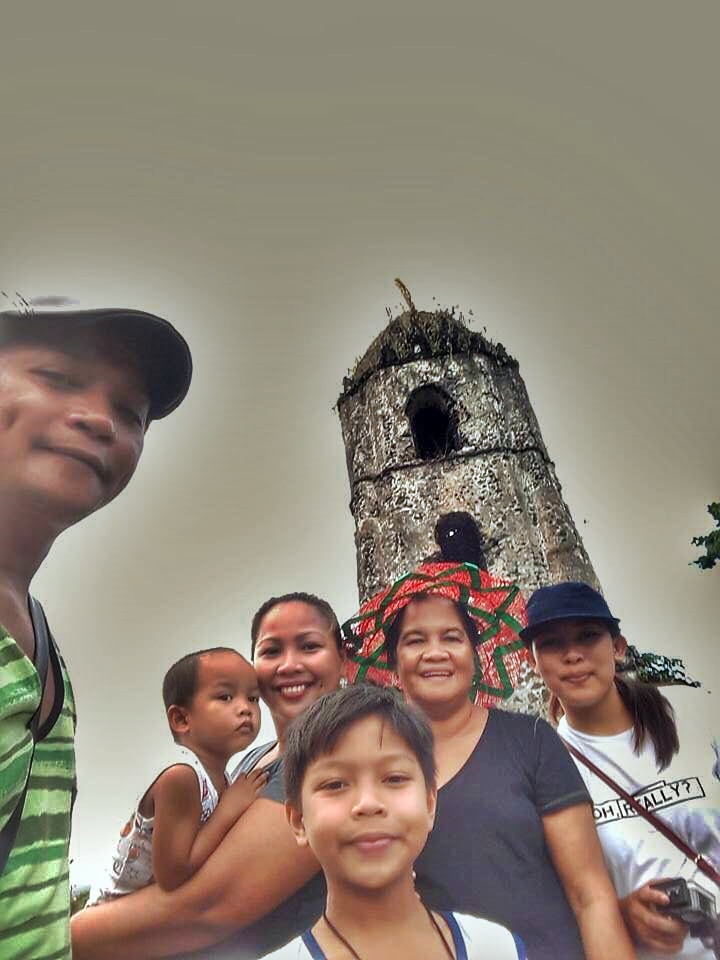 Mayon Volcano
Mayon (Central Bikol: Bulkan Mayon, Filipino: Bulkang Mayon), also known as Mayon Volcano or Mount Mayon, is an active stratovolcano in the province of Albay in Bicol Region, on the large island of Luzon in the Philippines. Renowned as the "perfect cone" because of its symmetric conical shape, the volcano and its surrounding landscape was declared a national park on July 20 of 1938, the first in the nation. It was reclassified a Natural Park and renamed as the Mayon Volcano Natural Park in 2000. Local folklore refers to the volcano being named after the legendary princess-heroine Daragang Magayon (English: Beautiful Lady).

Me and the Mayon Volcano I can say now that dreams really do come true. 😊
If you have any questions, just leave a comment below. 😊
Please UPVOTE, RESTEEM, and Follow me. 😊
Thank you so much steemians. 😊
God Bless! 😊

travel life pilipinas philippines tilphilippines
3년 전 by marianmiller47
$9.10
29 votes
댓글 남기기 7
Authors get paid when people like you upvote their post.If you enjoyed what you read here, create your account today and start earning FREE STEEM!
STEEMKR.COM IS SPONSORED BY

Go and chase your dream

Thanks for sharing @marianmiller. Bicol is actually one of my travel bucketlists.

Base on your post and pics, I'm pretty sure you guys had a wonderful time there. One of the place I would like to visit with my family.