Beginnings of a Digital Nomad: The Remote Year - "Behind the Scenes of a Muay Thai Fighter"

“The calmest man in the room has a superpower

And the crazier they get and the more they stress Behind the Scenes of a Muay Thai Fighter

Upon entering the Blue Arena stadium you’re immediately hit with an overwhelmingly potent, yet refreshing, aroma of tiger balm. To the left is the ring: a 24’ x 24’ elevated square enclosure where Thai kickboxing hopefuls battle it out in true modern-day gladiator fashion. Surrounding it are cold metallic bleachers filled with families, casual spectators like me, & loud Thai men betting on each fight. 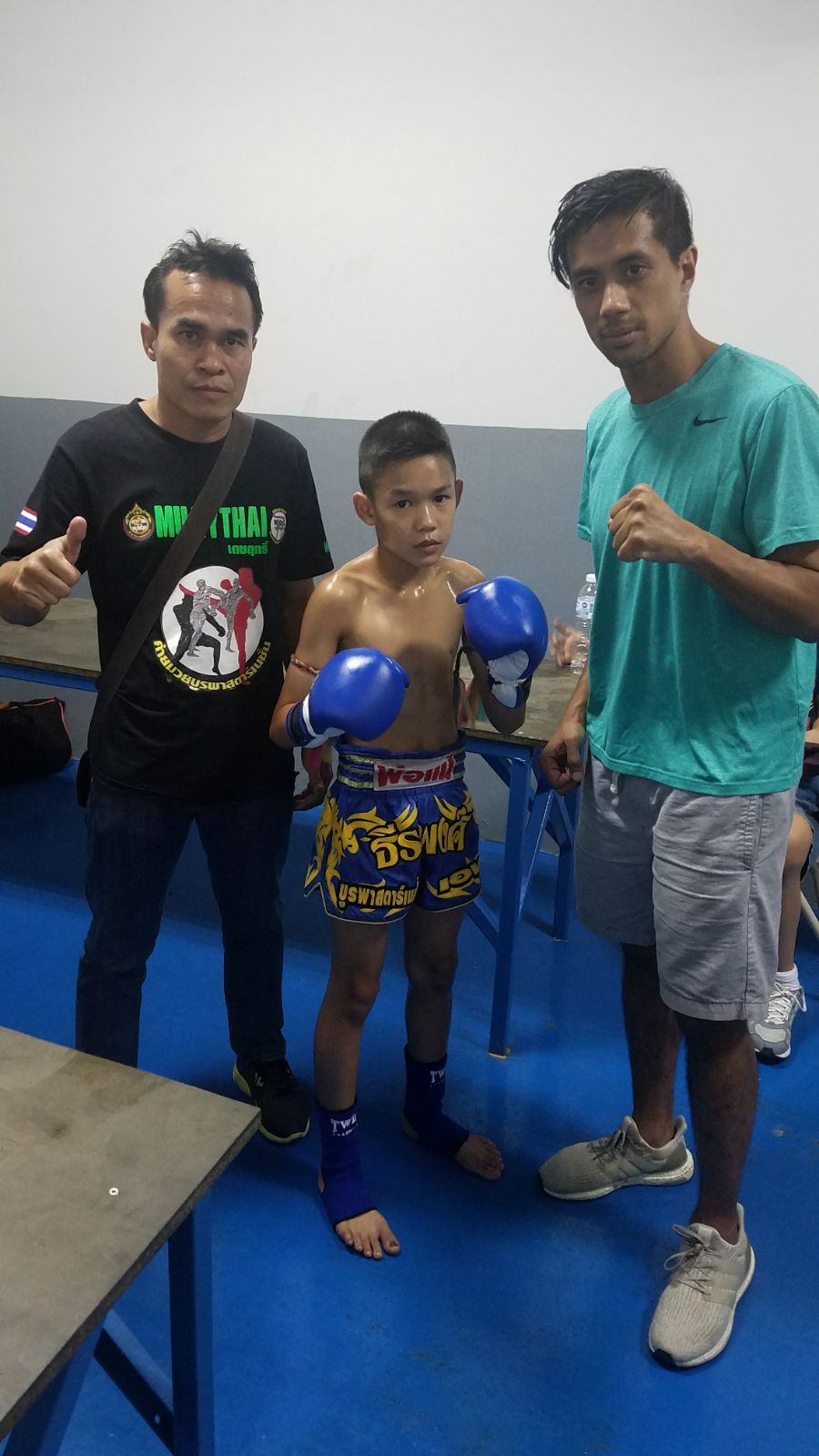 Muay Thai here is like a religion. It’s been nicknamed “the art of eight limbs,” for it incorporates strikes & blocks using not only your fists & feet, but the elbows & knees as well. Of all that I’ve seen/experienced in my journeys, Muay Thai kickboxers are the truest of true warriors.

Veer over to the right & what you encounter are two rooms: one for the blue (shorts) boxers & the other for the red boxers. Readying himself & surrounded by the love & support of his family is 12-year-old Theerapong Sidet, whose father is my Muay Thai trainer.

Unable to communicate with those around me, I’m forced to resort to not only typing my sentences out into Google Translate, but also to keeping my questions as simple “yes or no” questions so as not to require an incomprehensible response in Thai.

First step in this preparation process: wrap the fighter’s hands in tape so as protect it as much as possible from the blows he’s about to deliver. Steps two & three: change into the traditional Muay Thai boxing shorts, then get lathered in both Tiger Balm & liniment oil. The Tiger Balm + oil combination serves several purposes, some of which include: 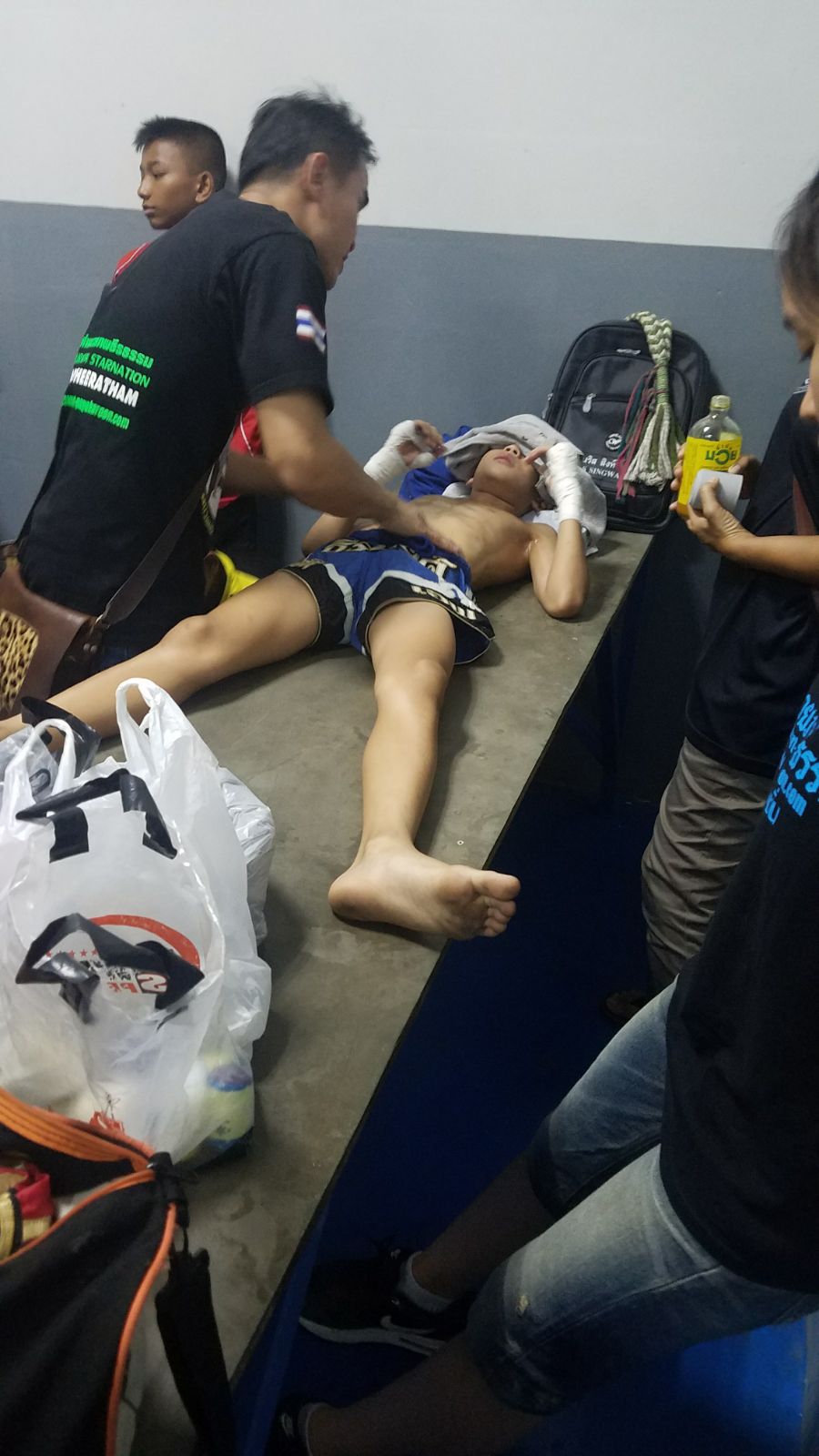 I take a step back to observe this process they’re all so familiar with at this point, which--to me--is still very much a new experience. As I look around I notice that despite the impending chaos & violence they're about to face, there's a surprisingly calm demeanor blanketed across each of the fighters' faces; inner peace & outward tranquility. For such a brutal bloodsport, respecting thy neighbor seems to be held in such high value in this culture. It’s worlds different than the ego-driven, self-absorbed attitude so ubiquitous in the western world. Here in the Kingdom formerly known as Siam, you’ll find none of that. 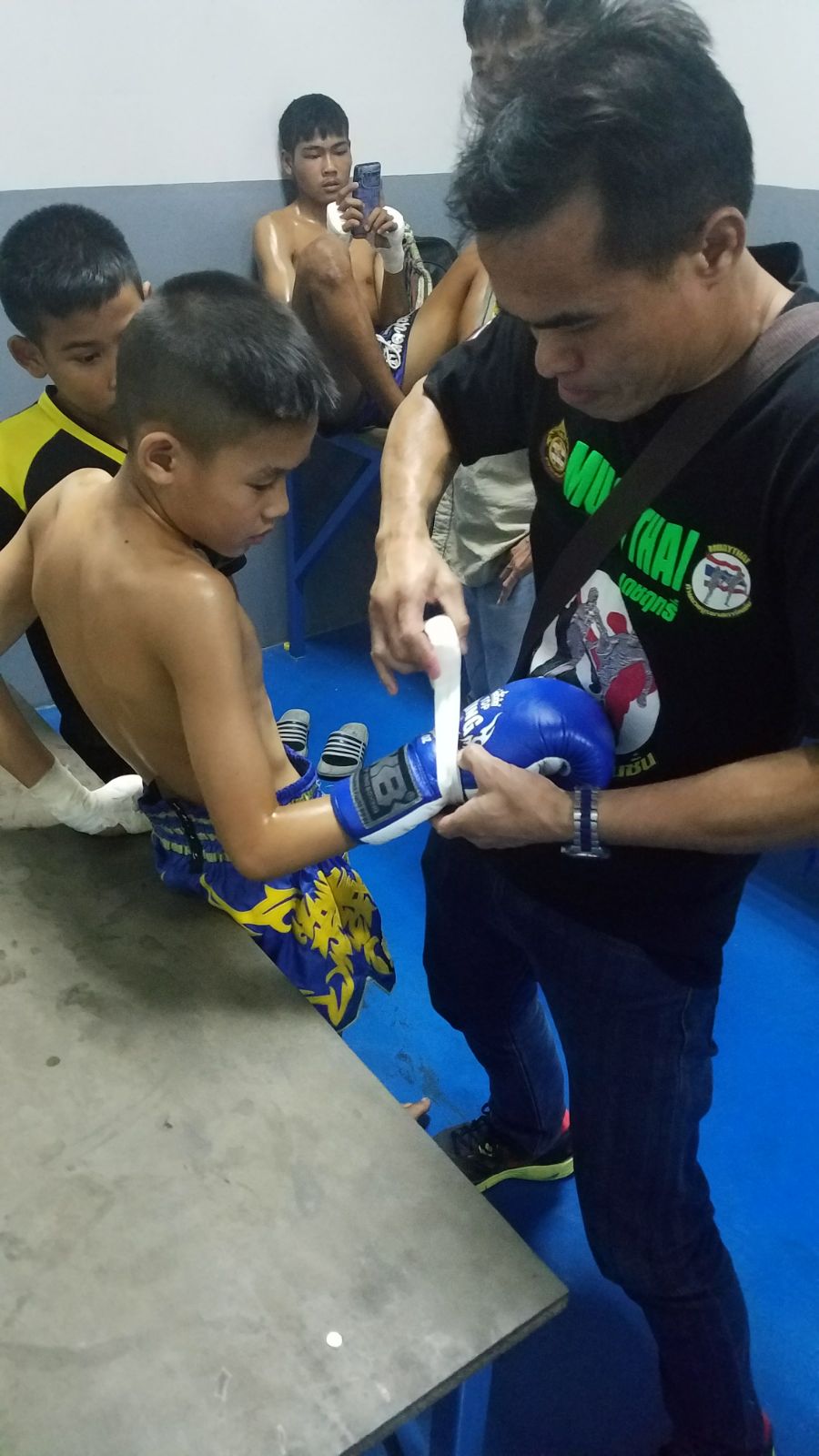 They continue to arm little Theerapong to the teeth, complete with ankle braces, groin cup, boxing gloves, and finally, the Pra Jiad, or armbands worn as a tribute to the gym the fighter is training out of. Before wearing these sacred bands, Theerapong & his father recite a silent, yet moving prayer, which I assume is an act of blessing.

We make our way out to the ring in an entourage of family & friends. But before entering the ringside, our fighter & his father recite another prayer for the Mongkhon (or headband) in the same manner as was performed for the armbands.

Upon entering the ring, traditional Thai music is played, called Sarama...and so begins the Wai Khru: a mesmerizing dance ritual performed at the beginning of every fight as a way for fighters to pay respect to their teachers. It’s during this captivating ritual that one comes to realize all the hard work the fighters must go through just to get to this point. 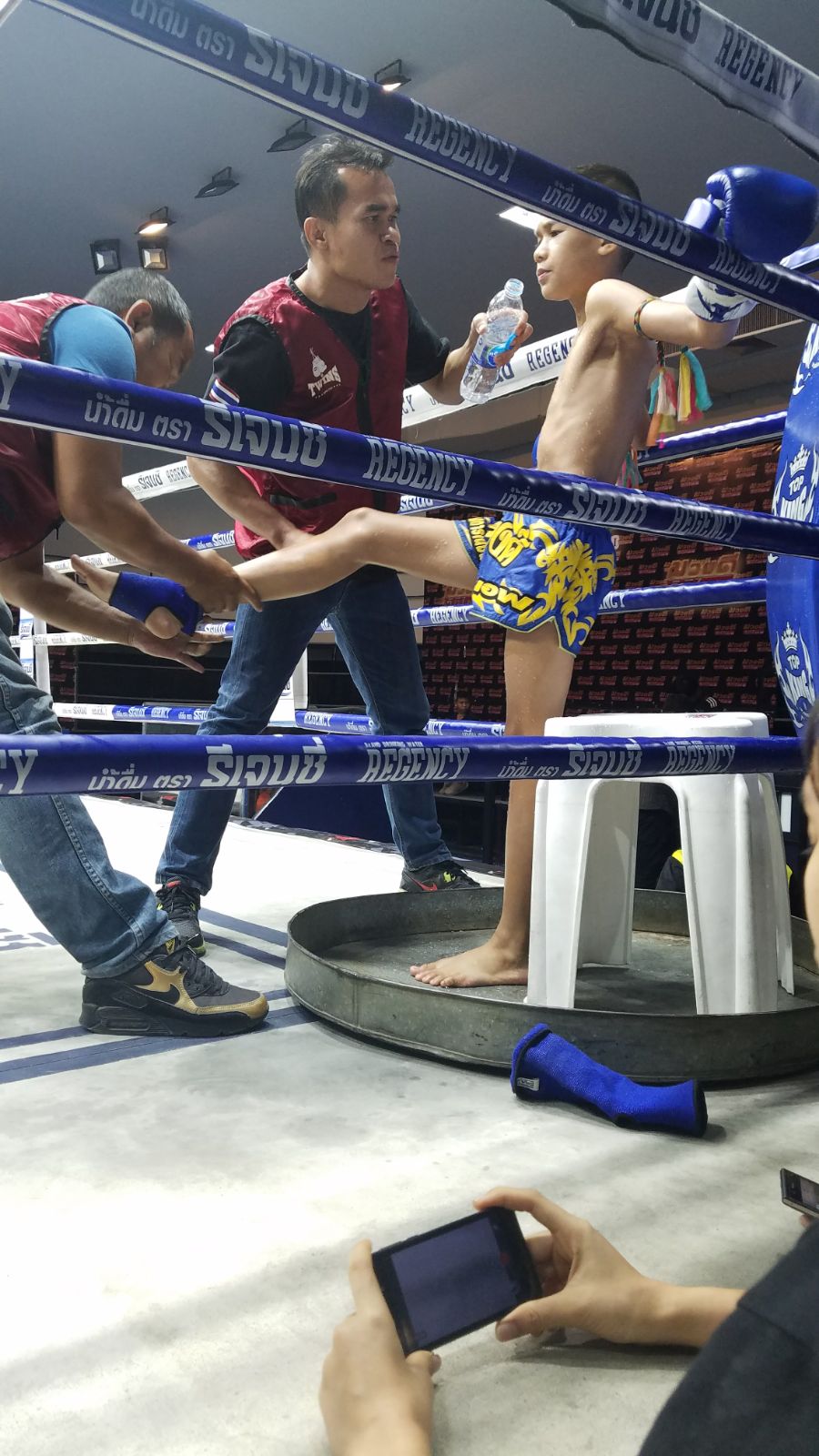 Behind all the striking & jeers of the crowd lie countless hours of sweating, conditioning, training...to say that the training process is brutal would be a massive understatement. In the world of Muay Thai, pain becomes a familiar acquaintance; struggle becomes the norm. This is why I say that--after experiencing it all firsthand--in my opinion, Muay Thai fighters symbolize everything it means to be a warrior (and I say this with personal past experience in both Kung Fu & Brazilian Jiu-Jitsu). Their ability to deliver endless strikes + take hit after hit, all the while having the agility to move as quick & fluid as the wind, makes the experienced eye appreciate this form of art; this “poetry in motion.” In addition, little do people know that Muay Thai is hands down the most effective form of stand-up fighting/striking (when it comes to ground game, Brazilian Jiu-Jitsu dominates this realm).

Breaking me out of my trance is the start of the fight. Little Theerapong is subject to five 3-minute rounds with 1.5-minute breaks in between each round. Despite how small they may be, I can’t help but wonder if each of these two child fighters realizes themselves how much of forces to be reckoned with they’ll become if they continue with their craft into adulthood.

Unfortunately, in the end, Theerapong Sidet lost the fight. But despite the unfavorable outcome, I still consider myself extremely fortunate to have been able to witness such a fascinating event from right from the very beginning!

travel life freedom business money
3년 전 by theywillkillyou62
$5.21
32 votes
댓글 남기기 4
Authors get paid when people like you upvote their post.If you enjoyed what you read here, create your account today and start earning FREE STEEM!
STEEMKR.COM IS SPONSORED BY

Over all that's the great post ..
I realize it is so valuable post .
Best of luck ..Carry on your own way..👍👍

Thank you, I'm very glad you enjoyed it :)

Hello there ,
I really liked this work very much. the narration and stages are great!
congratulations

Thanks, I had a lot of fun writing it! Hoping to be able to post more of these things that I'm really passionate about soon :)