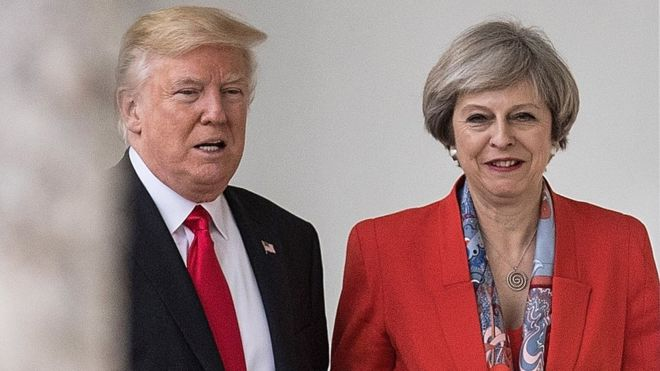 Donald Trump has told UK Prime Minister Theresa May to focus on "terrorism" in the UK after she criticised his sharing of far-right videos.
"Don't focus on me, focus on the destructive Radical Islamic Terrorism that is taking place within the United Kingdom," Mr Trump tweeted.
The US president had earlier retweeted three inflammatory videos posted online by a British far-right group.
Mrs May's spokesman said it was "wrong for the president to have done this".
The US and the UK are close allies and often described as having a "special relationship". Theresa May was the first foreign leader to visit the Trump White House.
Skip Twitter post

The videos shared by Mr Trump, who has more than 40 million followers, were initially posted by Jayda Fransen, the deputy leader of Britain First, a group founded by former members of the far-right British National Party (BNP).
Ms Fransen, 31, has been charged in the UK with using "threatening, abusive or insulting words or behaviour" over speeches she made at a rally in Belfast.
Several leading UK politicians have criticised the president for retweeting her posts, as has the Archbishop of Canterbury Justin Welby, who said it was "deeply disturbing" that Mr Trump had "chosen to amplify the voice of far-right extremists".
And it has led to renewed calls for Mr Trump's planned state visit to the UK to be cancelled, although Downing Street said on Wednesday that the invitation still stood.
In hitting out at Mrs May, Mr Trump first tagged the wrong Twitter account, sending his statement to a different user with just six followers. He then deleted the tweet and posted it again, this time directing the message to the UK PM's official account.
Trump wrong to share far-right videos - UK PM
Anti-Muslim retweet fits a pattern
What the videos Trump shared actually show
An unnecessary controversy
By Anthony Zurcher, North America reporter
It's clear at this point that Donald Trump won't let a perceived slight or criticism go unanswered - even if it's from a supposed friend. Even if it's from the leader of the president's closest international ally.
So shock isn't exactly the right word to describe the reaction to Mr Trump's initially botched attempt to tell Theresa May to, in effect, mind her own business. This is just another example of the US president's self-described "modern-day presidential" use of social media, where Twitter is a cudgel for score-settling no matter the diplomatic cost.
When Mr Trump assumed the presidency, one of the first foreign dignitaries he received was Mrs May, and it appeared they formed a quick bond - briefly holding hands as they walked past the White House Rose Garden. Those bonds will now be tested in a spat over a few morning retweets of inflammatory videos.
It's a wholly unnecessary controversy, but the international consequences could be all too real.
What did Trump retweet?
The first video purportedly shows a "Muslim migrant" attacking a young Dutch man on crutches. However, the claim in this tweet appears to have little substance.
A spokesperson from the Dutch Public Prosecution Service told the BBC that the person arrested for the attack "was born and raised in the Netherlands" and was not a migrant.
The Dutch embassy in Washington DC confirmed this on Twitter.

.@realDonaldTrump Facts do matter. The perpetrator of the violent act in this video was born and raised in the Netherlands. He received and completed his sentence under Dutch law.

trump hits
4년 전 by handfree4232
$0.00
4 votes
댓글 남기기 0
Authors get paid when people like you upvote their post.If you enjoyed what you read here, create your account today and start earning FREE STEEM!
STEEMKR.COM IS SPONSORED BY