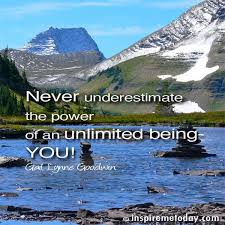 The bible records that man was created in the image and likeness of God. He was made to be the highest being, next to God. He was fearfully, carefully and wonderfully made.

Man as a being is at the pivot of God's creation. Upon creation, he was given dominion over principalities, powers and other creatures. For him to dominate, he was made fearless with full authority to subdue.

But at this present time, man seems to have derailed from his full purpose and thereby limited in his capacity. The reason for this is his naive of his rightful potentials, will power, spiritual and natural endowment.

As a matter of fact, the environment has posed a great fear and influence on man's subconscious mind, putting him in a chimerical status quo. Not untill man assumes that he is unlimited in his knowledge of his abilities and capacities and seek to discover more of himself, he will ever remain bonded by the walls of his fears.

Have you ever thought of these;
Who motivated Bill gates to discover himself?
Who motivated Jack Ma to get to the level he is?
Who placed Dangote at such level of wealth?
What about Mark Zuckerberg, Mike Adenuga and the rest?

The great inventors of past and present technologies of which leavens great numbers of tasks today were guided by who?
The answer is, once you discover the unlimited nature of man, you will appreciate the fact that they were motivated by their inner strength and will power which stems from their great knowledge of themselves. The environment might have mocked at them as usual.
What target have you set for yourself?
What goals have you achieved so far?
Are you equipped by your mind and thoughts?
Know this that the state of mind is the state of life. You can never do better than your mind.

unlimited being achievers willpower
2년 전 by bonaventure31
$0.00
2 votes
댓글 남기기 3
Authors get paid when people like you upvote their post.If you enjoyed what you read here, create your account today and start earning FREE STEEM!
STEEMKR.COM IS SPONSORED BY

You are right. Never understimate the power of the unlimited being in you. What a great write up

Yes. Human has a lot of capacity to do many things but some limit themselves. Believing in yourself is always the key to achieve great things and trying out new things.

Yes. You are right