So you think a meat-based diet is unethical, cruel,
and bad for the planet. But you have a dog. What do you do?
Though it seems impossible, here I will explain how I overcame millions of years of evolution to convince my canine friend that a plant-based diet is best.

So you've watched Cowspiracy and What the health and dove headfirst into the vegan Blogosphere and made big changes in your lifestyle. But there's one little thing you don't feel so good about: your dog. Even if you would never get a dog again, maybe you had one before you learned how much better a vegan lifestyle is, and you just can't part with your canine buddy. But you feel so guilty about feeding them meat. I mean, that stuff in dog food must come from the worst of animal agriculture, right? Maybe you even tried a compromise for a while and started collecting roadkill so they wouldn't go to waste. Two birds with one stone! Well, if you tried that solution, you probably discovered like I did that your vegan housemates didn't care much for the bloody, smashed raccoon parts in the freezer.

There must be a better solution!

Well, who needs meat anyway? I don't, right? Why can't my dog live on the same diet I can? RIGHT! So beans and rice it is! Didn't I read somewhere that kale has 3x the protein of a steak? Those kibbles are mostly corn anyway.

It's all about the dressing

What I learned from my experiments with my dog is that flavoring your dog's vegetable food is key to success. Thinking back to my days of doing trail crew, when I would spend weeks at a time in the backcountry with nothing but stale dry food to eat, is that hunger is the best seasoning! So I seasoned her meals by making sure she had access to nothing but vegetables. Soon she was practically swallowing that lettuce whole!

JUST KIDDING
My dog is actually just a freak who I think might be part pig. She eats pretty much everything with gusto. That includes large quantities of animal parts. She can crunch the leg bones of a deer into bits and swallow them whole in seconds. She can consume an entire chicken, feathers and guts and feet and all, in less than ten minutes (she doesn't kill them, I give her ones that died from injury or age). And that means, yes, she eats lettuce. And kale, and apples, tomatoes, and pretty much anything else she can find.

This piece is for humor. Dogs are meant to eat meat. If you're a vegan, It's a dilemma. Live with it. Life is full of dilemmas.

vegan eatyourveggies lifestyle funny
4년 전 by taddeus47
$75.88
14 votes
댓글 남기기 13
Authors get paid when people like you upvote their post.If you enjoyed what you read here, create your account today and start earning FREE STEEM!
STEEMKR.COM IS SPONSORED BY

My dog is an extremely picky eater, and well - vegan. Dogs are omnivors and therefore can be vegan (Cats - not so much). They do need some special nutrition and I therefore choose a well balanced vegan kibble, and treat her with a vegan canned food from time to time. Dogs also love seitan, and I use a homemade variety for training treats.

Several vegan dogs have lived longer than average dog lives, for example, Floyd who lived to 20 and Bramble who lived to 25 (see more in the book: Bramble; The dog who wanted to live forever).

I started eating a whole food plant diet for my health about 7 years ago and over time became grossed out by my dog's food. I did research and found that my dog could switch to veggies too. My vet has said that she is one of his healthiest patients. In fact, he stated that about 80 percent of his animal patients are overweight or obese and with the illnesses that connect to being overweight. My dog is lean, active and extremely bright - often muddy. 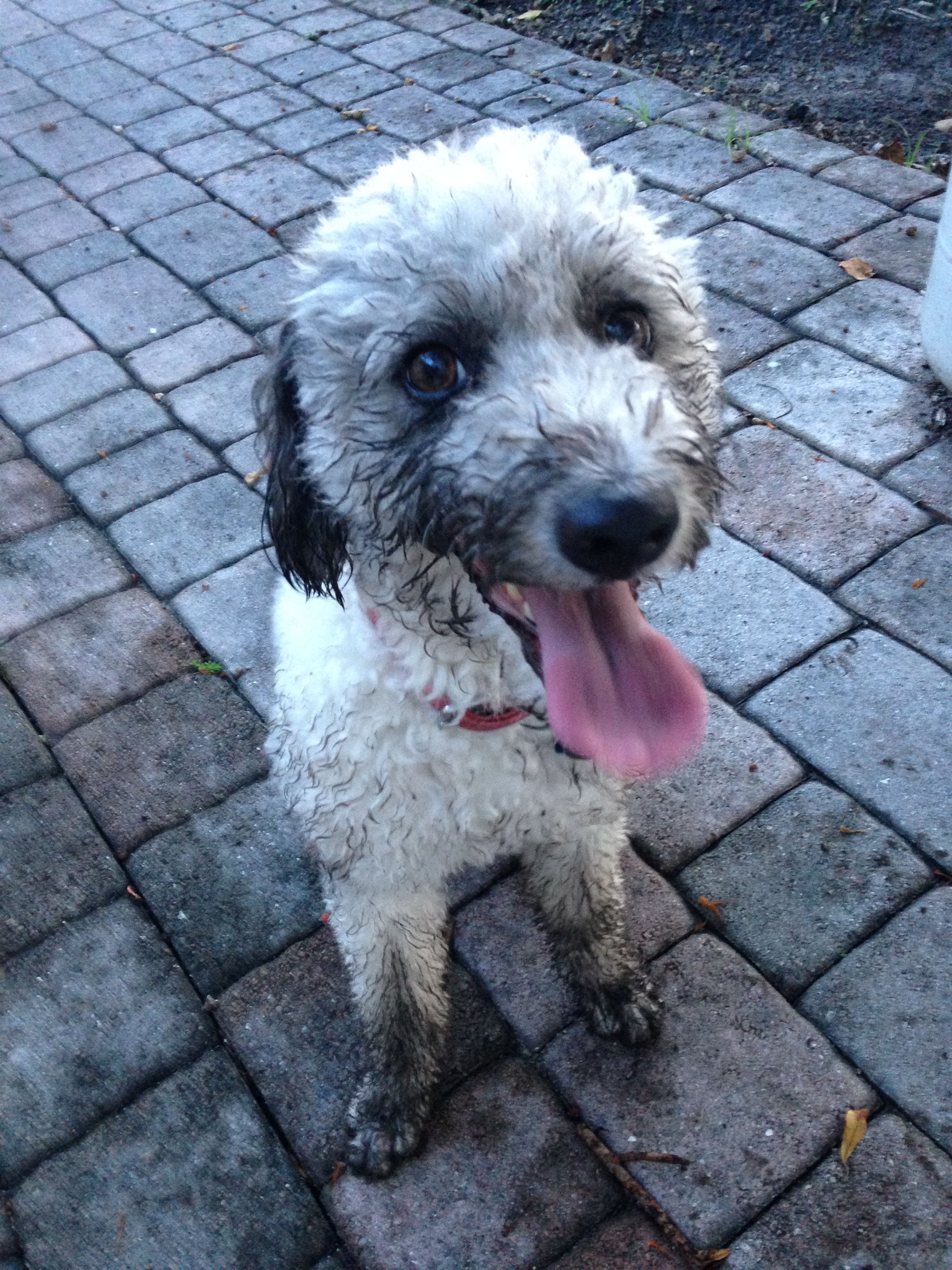 You might want to reconsider a vegan diet for your dog - make sure to select a balance diet.

Such a beautiful and healthy looking dog!

i was getting really excited when i read your intro post because i like inventors and creative people. however when I saw this article I was disappointed. don't get me wrong its a great article. but upbotting yourself $50? then writing about a loophole in the reward pool which no one will see? you really killed my joy dude with your lack of ethics.

@torico I am still learning and exploring this space. ’upbotting’ as you call it is one way to leapfrog past the thousands of garbage posts and get in front of people’s eyes. I don’t necessarily agree with it but I also don’t agree with taxes, however, when it’s the way things work I am willing to play. ‘Upbotting’ can actually cost more than it rewards, but if it puts attention on a post that would otherwise moulder, it’s worth it. I am experimenting to learn more about the rules of the game, as it were.

If I could I would do away with the bots. But I can’t, and as the saying goes, ‘It’s a crooked game, but it’s the only game in town’.

And by the way, that post I made about the exploited loophole - the right person(s) was eventually reached and managed to prevent something like 4,000 SBD from being sucked from the system. I couldn’t have done it by myself and that post was one of several pathways attempted to find the help needed. I didn’t describe the abuse because it is too easily replicated and I didn’t want to broadcast the method.

its not the way things work for many people because they either cannot afford it (think third world uneducated people struggling to survive who need whatever they can get to survive) or don't feel it's ethically fair.

there are systems in place to get noticed. curations, servers who support their members with upvotes. so basically what you are saying is your work is so superior to other people that might be just as good at writing, but somehow you deserve more reward.

not more notice, because you aren't getting that many more views because you haven't done the work of creating a following by networking and curating.

it's very much like pushing drugs or committing a crime. yes, you can get away with it, but is it morally right? i don't care that you closed some loophole. you do that cause you are a good person and yes, well done. but it doesn't mean you then turn around and jack the system yourself. it's only a crooked system if you play that game. stop siding with the politicians.

Haha- I dig this. I have spent most of my adult life as a mostly raw vegan (not currently, I live out in the gorge and fish is on the menu most days), but am far from dogmatic about it- I get bothered by folks trying to feed their dogs vegan too.

Thanks :) I really just wanted to share the clips of what a goofball my dog is for eating lettuce, but once I started I couldn't stop....
I dig your work too! I am learning so much fascinating stuff from what you share. One of the things I love about steemit is how much I stumble on things I would never otherwise. It really gives a contrast to see what a bubble other social media is. BTW, Is your show still up at the sancuary? I'd like to see it.

Those are pretty funny clips (btw how did you post those clips, if you don't mind sharing- am still gathering intel on how to create and share posts effectively)- it's hilarious how some animals really get a taste for unexpected stuff!

Thanks for being interested in my work! The sanctuary show should be in March, so they aren't up yet. Am actually last-minute shooting stuff for it this month (and seeking last minute models haha, I have been busy. I should maybe put something up about that...). Sanctuary is a great, no pressure space. It's really comfortable and full of nice people.

I know what you mean about Steemit having all sorts of diversity in content- I am so excited! I am brand new too and my head's exploding. It's awesome!

I made the GIFs in photoshop and from there it’s really simple - just drag and drop into the post editor exactly like any other image.

I’m excited to check out the sanctuary, I hadn’t heard of it before, which surprises me. It sounds like a great place/community.

Thanks, that makes sense about them being gifs!

i was never a vegetarian, but reading this post it convince me even beyond feeding my dog without meat. Great piece @taddeus

Congratulations @taddeus, this post is the tenth most rewarded post (based on pending payouts) in the last 12 hours written by a Dust account holder (accounts that hold between 0 and 0.01 Mega Vests). The total number of posts by Dust account holders during this period was 11360 and the total pending payments to posts in this category was $5806.15. To see the full list of highest paid posts across all accounts categories, click here.