Each daily “Vocab-ability 1x1” post has 2 main features, as follows:

By spending 5 minutes reviewing today’s “Vocab-ability” entry (below), you can learn the vocab roots and many high-level English words.

One “Vocab Practice” exercise (for UpVotes)

By spending another 10–15 minutes, you can practice using today’s words by composing your own sample sentences. Your practice efforts will be rewarded with UpVotes.     (See “Vocab Practice” rules and notes below) 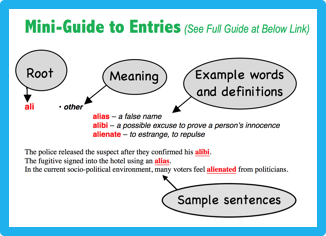 With this ‘Mini-Guide,’ you can identify the components in the “Vocab-ability”  entry above.

(To facilitate your quick reference, the ‘Mini-Guide’ has been minimized. For the full "Guide to Entries," right-click here. 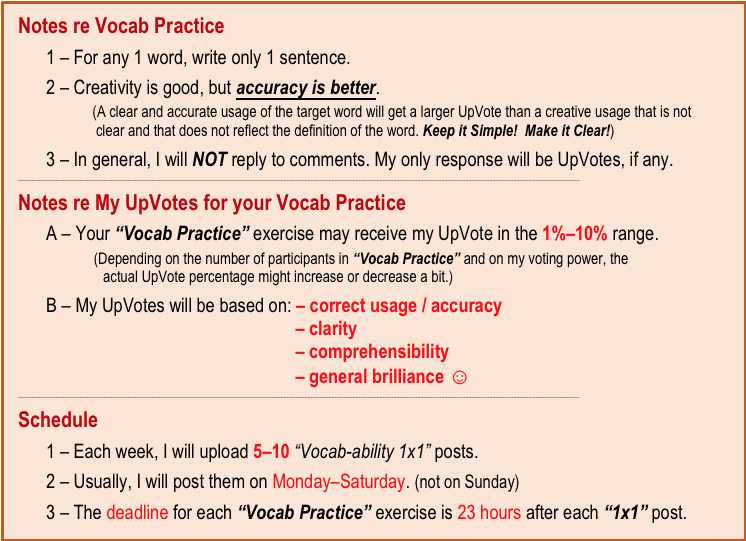 Note re Copying each Entry

Each separate post in the “Vocab-ability”  series consists of one entry (one text-box). To use any of these “Vocab-ability”  entries for your personal study or in any classroom, you can download them by clicking and dragging the text-box that you want to use, and then print them out.

Note re Free Use

Please feel free to download the above text-box, copy it, print it out, and distribute it for any and all educational purposes. If “Vocab-ability”  helps you or your students to increase your English vocabulary, it will have served its purpose.
(I hold the copyright to the original “Vocab-ability” guide, which was published in 2002. I hereby grant free use of all the material contained in this post and in all other “Vocab-ability” posts on Steemit).

vocab-ability writing contest steemiteducation esl
3년 전 by majes.tytyty78
$72.53
83 votes
댓글 남기기 60
Authors get paid when people like you upvote their post.If you enjoyed what you read here, create your account today and start earning FREE STEEM!
STEEMKR.COM IS SPONSORED BY

Thanks! That was the intention.

Re #4, can we then say that homicidal maniacs are not to be held accountable for any killing they engage in due to their mental illness?? :-) And is my dipsomania excusable???

Oh I missed one?
No go to a bar with your "dipsomnia" and murder somebody else...
=) Advice to the lovelorn. Avoid pyromaniacs. For true happiness, find a nymphomaniac. :-)

I'm gonna start up a rehab center for nymphomaniacs, here in my home.

3.he became a megalomaniac that he hardly sleeps .

MY VOCAB PRACTICE.
1-Pyromaniac:-A popular view is that many arsonists are in fact.
2-Kleptomaniac:-A kleptomaniac has a mental disorder that compels the person to steal.
3-Megalomaniac:-Megalomaniac is sometimes a mental illness.
4-A mental condition that causes someone to want to engage in sexual activity.

Your definition is misleading and I question your suitability to teach anyone English vocabulary.
You define a maniac as a "lunatic" or "crazy person" with no reference to the dictionary from which you got said definition, but then use words such as pyromaniac, megalomaniac as examples of the word. So that means that it is the definition of a maniac as:

A person who has an excessive enthusiasm or desire for something

from The American Heritage Dictionary of the English Language, 4th Edition

not as a "lunatic" which is:

A person who is affected by lunacy; a mentally deranged person.
from American Heritage Dictionary of the English Language, Fifth Edition

If you don't know the obvious differences between being deranged and having an irresistible compulsion then how can you teach English language?

Also I don't see any etymology of the word here or words which have the same root nor are the synonym and antonyms present. So what kind of education are you actually providing?

EXT. Street corner in a shady part of town. Under a broken green neon-sign thats blinking.

JIMMY and RAY two "street-people" stand on the corner, they are looking quite nervous.

JIMMY
-You can trust Johnny, he's just a normal maniac not a complete lunatic.
RAY
-I'm not sure last time I saw him he was waving a knife around, saying I owed him 20 dollars...
JIMMY
-Awww c'mon, relax man! Johnny was on bath-salts that time, everybody gets like that on bath-salts.

Thanks for your input, but after a few decades of teaching English and editing English publications, I can assure you, I am qualified to teach English vocab. Particularly to ESL students.

As for my not including the proper and actual "dictionary" definitions, I did that intentionally. When I originally compiled the material that became "Vocab-ability," my intention was to make it understandable for those students for whom English was not their native tongue. Consequently, I made an extra effort to keep the definitions easily understandable.

As it is, Vocab-ability can help mid-level or advanced-level students learn and improve their vocabulary by introducing them to the target vocab in a clear and accessible way. It is not intended to teach them the subtle nuances of the target words, nor the etymology. That would only confuse most students. And that's not the way to learn a second language. As a teacher of English and a student of 3 other languages, I can assure you that I know about effective language-acquisition techniques.

Also, if you believe that the 4 examples / target words do not typify "crazed person" or "lunatic." then how would you define them? For instance, would you define a pyromaniac as someone who just happens to have excessive enthusiasm for fire? That would be of no benefit to most ESL students.

Finally, the point of the original Vocab-ability publication, of these Vocab-ability posts, and of the Vocab Practice exercises is to introduce learners to the vocab roots and to help them learn. And many have benefited from Vocab-ability.

And believe me, I can teach not only vocabulary, but grammar, writing, and more. Much more. Very effectively, and with solid results. Many of my students could attest to that.

Does that answer your question about my "suitability"?

Hmmm, I guess "malpractice" is as good as practice – at least in this case.

You define a maniac as a "lunatic" or "crazy person" with no reference to the dictionary from which you got said definition...

Your response to which was:

As for my not including the proper and actual "dictionary" definitions, I did that intentionally.

So I stated that you hadn't included a reference for the definition you used but the word you chose to quote was dictionary and then having changed the subject of my comment to suit yourself, in oppose to what was actually written, you preceded to have a write your response to me.

Vocab-ability can help mid-level or advanced-level students learn and improve their vocabulary by introducing them to the target vocab in a clear and accessible way.

but previously you had justified your use of non dictionary definitions by saying:

I can assure you that while those definitions found in the American Heritage Dictionary or Merriam-Webster might be useful for native speakers, those definitions will not help beginner-level or mid-level ESL students

I'm sorry but I'm afraid that I don't understand. I thought that your target audience was mid to advanced level ESL students.

Also, if you believe that the 4 examples / target words do not typify "crazed person" or "lunatic." then how would you define them? For instance, would you define a pyromaniac as someone who just happens to have excessive enthusiasm for fire? That would be of no benefit to most ESL students.

In response, if I was relying on my own personal understanding of the word pyromaniac I would define it as a person who has a compulsion (the simplified form of excessive enthusiasm) for starting fires.

Allow me to further state that if I was writing your lesson I wouldn't have used advanced words which require a medical or psychological dictionary for even native English speakers to understand as examples. Also since "maniac" is now considered to a derogatory, slang term when used alone, I wouldn't have taught it at all.

You tried to teach a word which can only be used in a polite context when used together with a Greek or Latin prefix. How will that help mid to advanced level ESL students?

Why couldn't you have used the word "mania" instead? It actually fits your lessons better.

There's more but since you seem to have taken my previous comment as a personal attack, I have little hope that this will be taken in a better light. The simple fact is that in my personal opinion I do not think that your lesson is adequately referenced and I think that it is misleading. If you disagree, as you obviously would, so what?

Currently hiring people, lunatics need not apply, only maniacs may inquire within.

Congratulations @majes.tytyty! You have completed the following achievement on Steemit and have been rewarded with new badge(s) :

Sneaky Ninja Attack! You have just been defended with a 70.77% upvote!
I was summoned by @majes.tytyty. I have done their bidding and now I will vanish...

You got a 36.84% upvote from @postpromoter courtesy of @majes.tytyty!

MY VOCAB PRACTICE
1-Pyromaniac
I stay away from pyromaniac because i love my life.
2- Kleptomaniac
Most graduates who have higher degree and are unemployment, mostly result to kleptomaniac
3-megalomaniac
Everyone born into this are megalomaniac
4-nymphomaniac
Some men like nymphomaniac women