Field site fire - the ecology of the fynbos

The day after Valentine's Day, we arrived at our field site in the fynbos-covered mountains to a jarring vista. Though hardly lush and verdant before (ensured by an on-going drought in South Africa's Western Cape province), the crags of rock where we conduct our work were now desolate in an entirely different way. Overnight, a blazing bush fire turned the plant covered slopes into this: 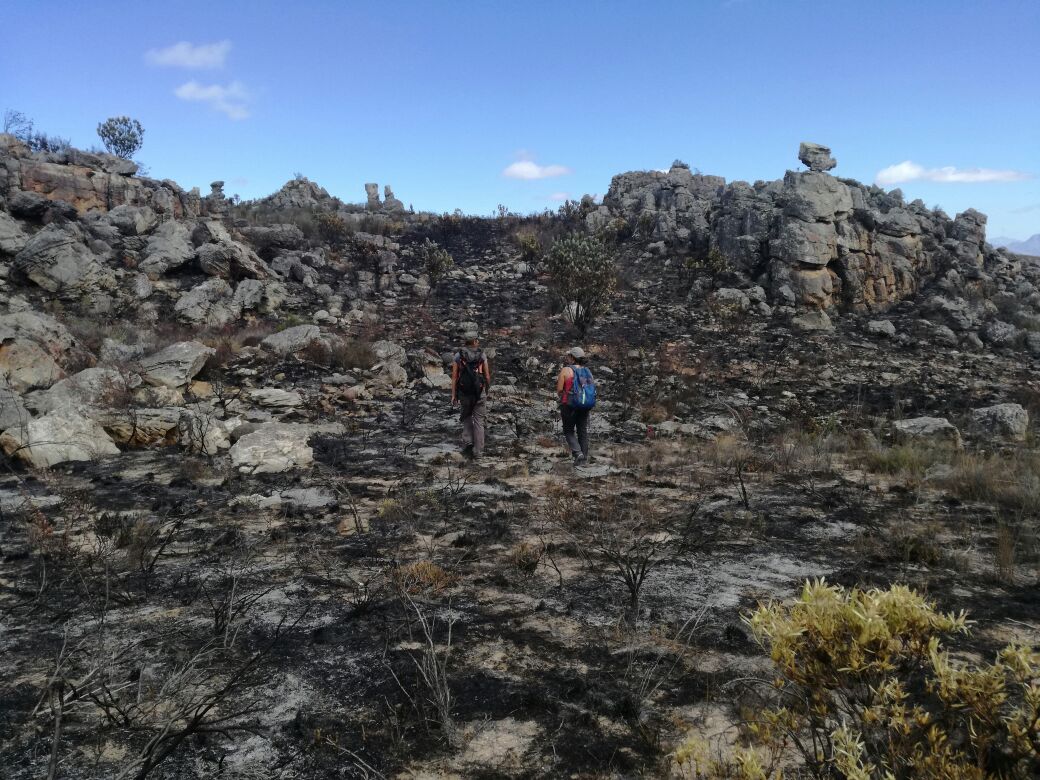 The whole field site simply burned down overnight. The day before, we'd seen smoke coming from one valley over and checked it out: We kept an eye on this through the day with binocs. Though those flames look small, they are actually about chest height

Though the flames seemed to be moving in a different direction, and though we'd alerted the appropriate authorities, the fire still managed to rampage through our site before it was brought under control. Returning to the scene the next day was like stepping into an alien landscape. Where once tall protea bushes had stood, we now had this: 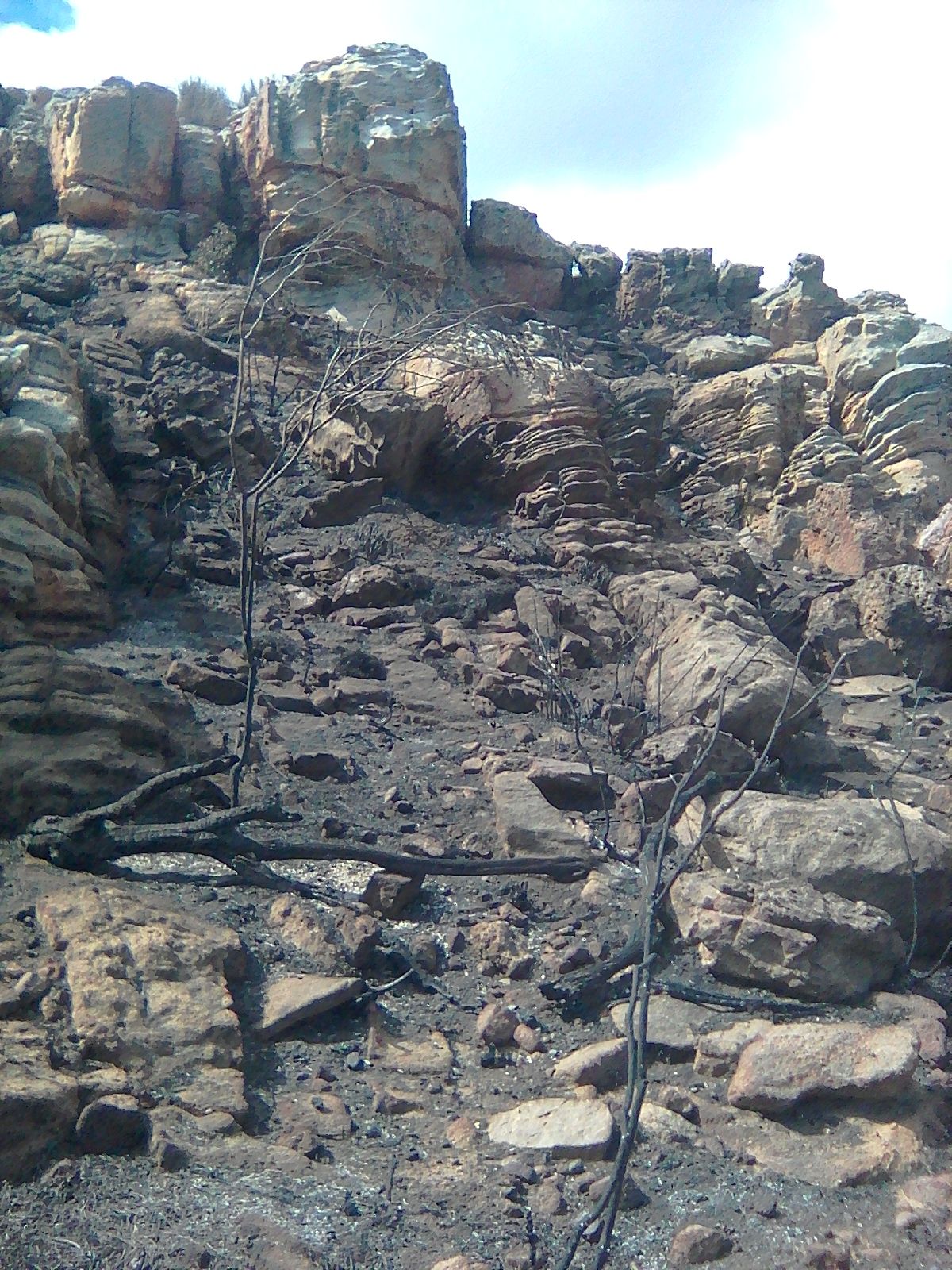 Already tinder dry from the drought, these went up like kindling 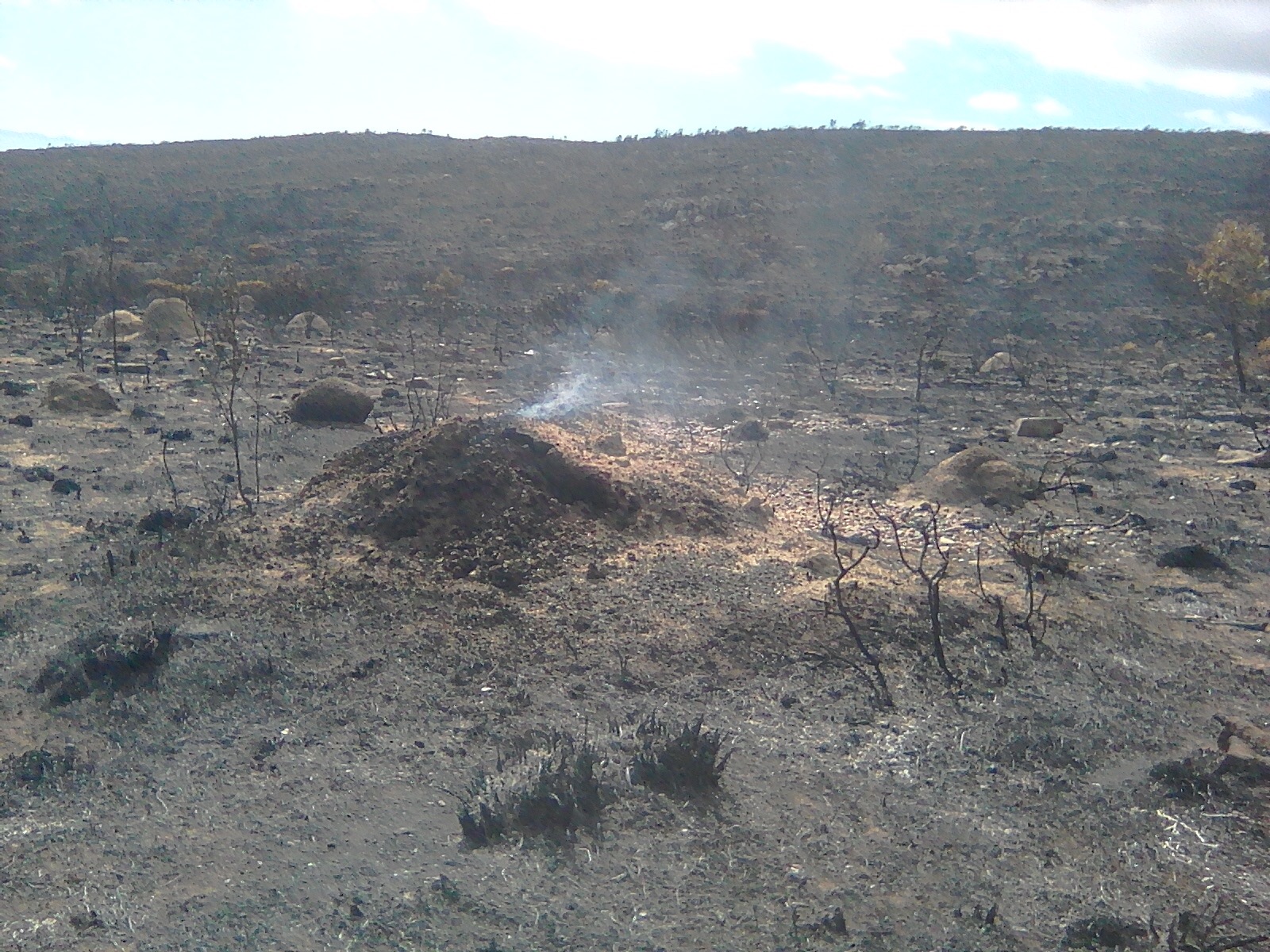 A smoldering termite heap. In places there were still patches of active flame

The previous night, we'd been delighted by the arrival of a thunder-storm, complete with some of the rain the area desperately needs. Though the rain was short-lived, it seems likely the electrical storm that accompanied it was what started this blaze. The little bit of moisture introduced into the soil was hardly a match for months of desiccating sun that turned the entire area into one massive brush-pile.

Still, even in the midst of this there are some signs of life: A ground protea, triggered by the fire, releases its seeds

For the vegetation of this region, fire is a natural part of life. Though this is a fairly disastrous outcome for a biology field site, it is simply another part of fynbos ecology. Fires in 10-14 year cycles encourage new growth in the newly enriched soil (which otherwise becomes nutrient depleted). If fires occur more frequently, the longer lived shrubs don't get a chance to mature. In contrast, when they are not frequent enough, other species begin to die back. For some types of fynbos however, cycles as long as 25 years are the norm. In such cases too, these pyrophilic plants benefit from this natural resetting of floral succession. What's even more fascinating about this process is that factors such as the intensity of fire will affect which species appear after this 'reset.' For some, seeds buried for fifty years will suddenly sprout if the fire was intense enough to stimulate their germination.

Now while the biologist in me is fascinated by the intricacies of this unique system, the after effects of the fire itself will take more getting used to. For the next few days as I go to field, I think it will still come as a bit of a shock to see this vista each morning, so blackened and charred where once I had to push my way through prickling bush and proteas. But as the weeks roll on, we will hopefully start to see some new growth.

walkwithme steemstem biology photography nature
2년 전 by holothewise49
$8.11
72 votes
댓글 남기기 18
Authors get paid when people like you upvote their post.If you enjoyed what you read here, create your account today and start earning FREE STEEM!
STEEMKR.COM IS SPONSORED BY

Depending on the nature of your research, this could be an opportunity, too! Ecosystem recovery research is always useful stuff.

Yeah, especially in fynbos. It's not so much a possibility for the current project, but there is still some work to be done :)

When isn't there more work? :D

Though understanding the regular need for such a "reset" and that it was a natural cause to create this fire, it is still so sad.. So many animals must have lost their homes, some probably their lives.. :(
Heartbreaking

There will definitely be some losses of animal life, but those species are adapted to the cycle of burning and regrowth as well. This is a bit of a biologist way to look at things, but from a population level it's fine. That side, I'm going to be very sad if I don't see my little elephant shrew pop up somewhere in the next few days...

@holothewise, I am sorry that you site was destroyed and that your work could not be conducted as expected, but I am excited that what happened in the present will allow for new growth in the future.

Keep your head up and keep Steeming!

yeah, I mean it's not ideal, but this is just the way fieldwork goes. Nothing ever turns out as expected and then you simply have to adapt :)

Up my street, thanks @holothewise!

..Hessequa district /- has been a fiery season..not over yet!

Ah, are you in that area? We are close to the overberg :)

Lived in Greyton for four years...long time ago. Heard of fire reports thereabouts as well. Now closer to Riversdale.

Are you only there for a project? I happen to have a lady-friend in Botrivier, in case you guys in need of accommodation or whatever :)

Hey thanks :) Yeah we are just out here for the project and have accommodation on a nearby vineyard :)

Greyton, huh? So pretty! I was actually there just this past weekend for some R n R and loved it. Wouldn't mind having a little cottage there :)

Oh lol. Judging by the prices I saw this weekend you must be very happy with having sold it 😂

Tiny-tiny plot got offers for twice the price I finally signed it away for just after the fact! (It was a rather drawn out affair, initiated more than a year ago).

Do enjoy your stay!

(And should you ever drift this way, I could refer you to the loveliest ol' shabby li'll shack right on the sea..and introduce you to the local environmentally knowledgeable community, should you feel that way inclined)

I will definitely keep that in mind :)