Packed with alpacas: a walkwithme through the winelands That's right, alpacas. Now that I've got your attention, you're probably wondering, like I did, what the hell a bunch of alpacas are doing way out here in wine country… Well, being as how my compatriots headed back to Cape Town for the day (our fieldwork called on account of weather), I decided to take a wander down the road to the alpaca farm we've passed so many times on our way to the field and find out.

Leaving our little cottage in the vineyards, you hit dirt roads immediately, backed by the majestic mountains I've written about (possibly a few times) which surround the area: 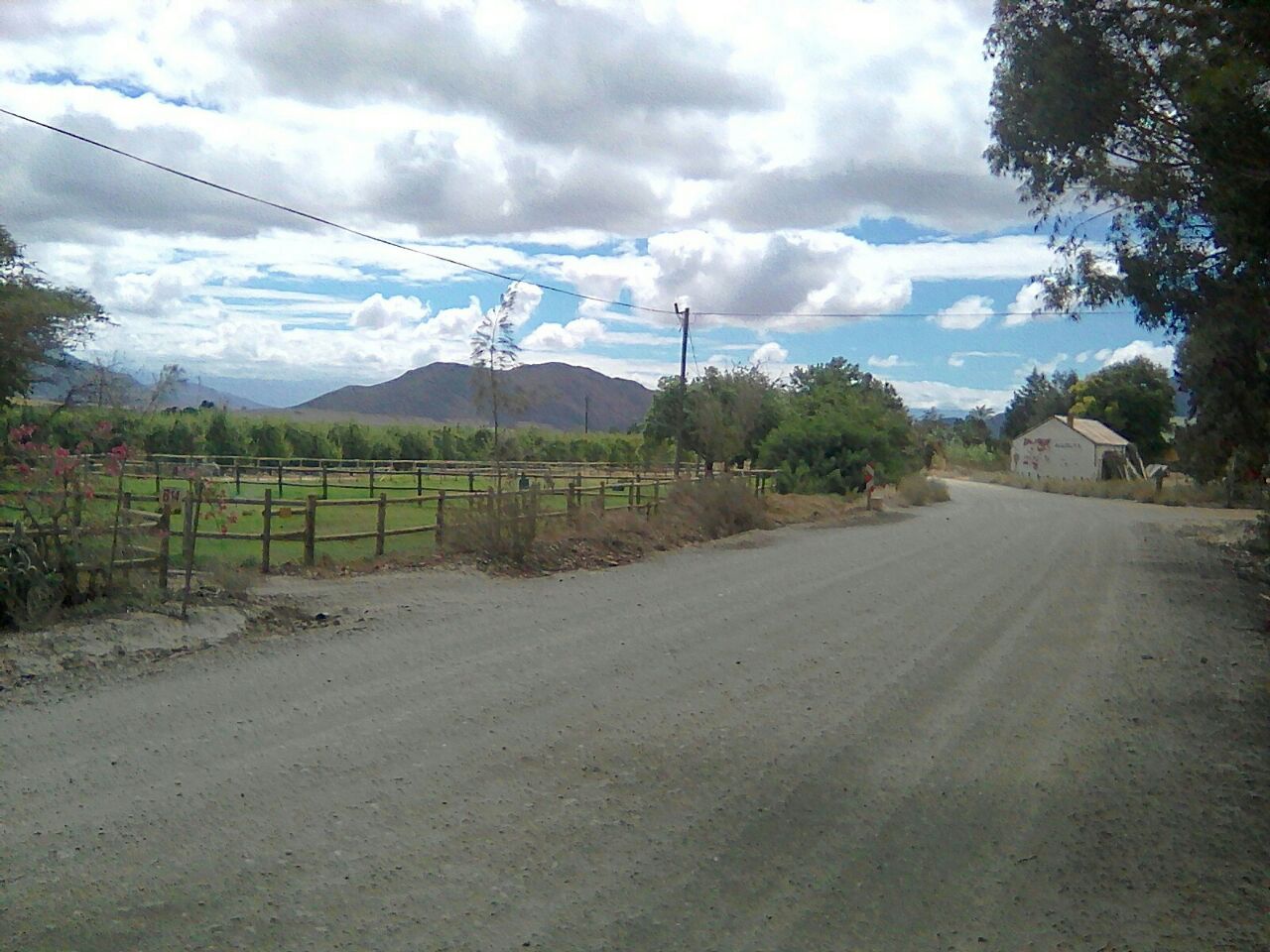 There's quite a few paddocks en route as people around here seem to be very keen on their horses, and passing one, I noticed this fellow eyeing me up curiously: Now I love horses, always have. The problem is the damn things make me break out in itchy welts when I touch them, but of course I have to do it anyway… So, mentally prepared for the consequences, I headed down to the fence to have a chat with this somewhat hard-done-by looking horse. It turned out he was very friendly and pretty much immediately came over for cuddles: 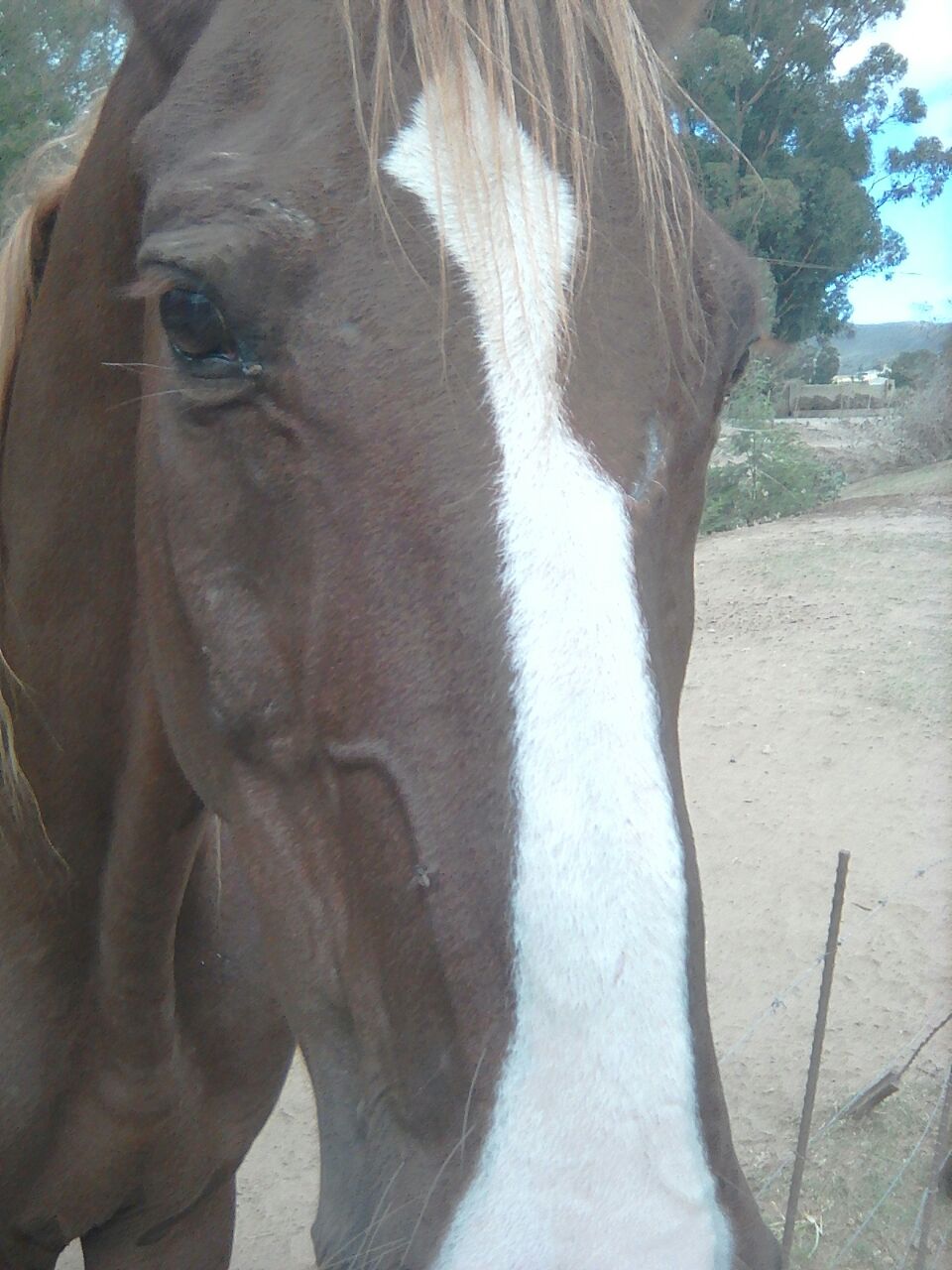 Or, you know, as part of an elaborate ruse to try and extract the notebook from my pocket, presumably so that he could eat it. Having failed in that endeavor, my new horse friend gave me a sour look and wandered off and I resumed my hike to the alpacas: Just a bit further down the road, and there it was, the alpaca farm of myth and legend: 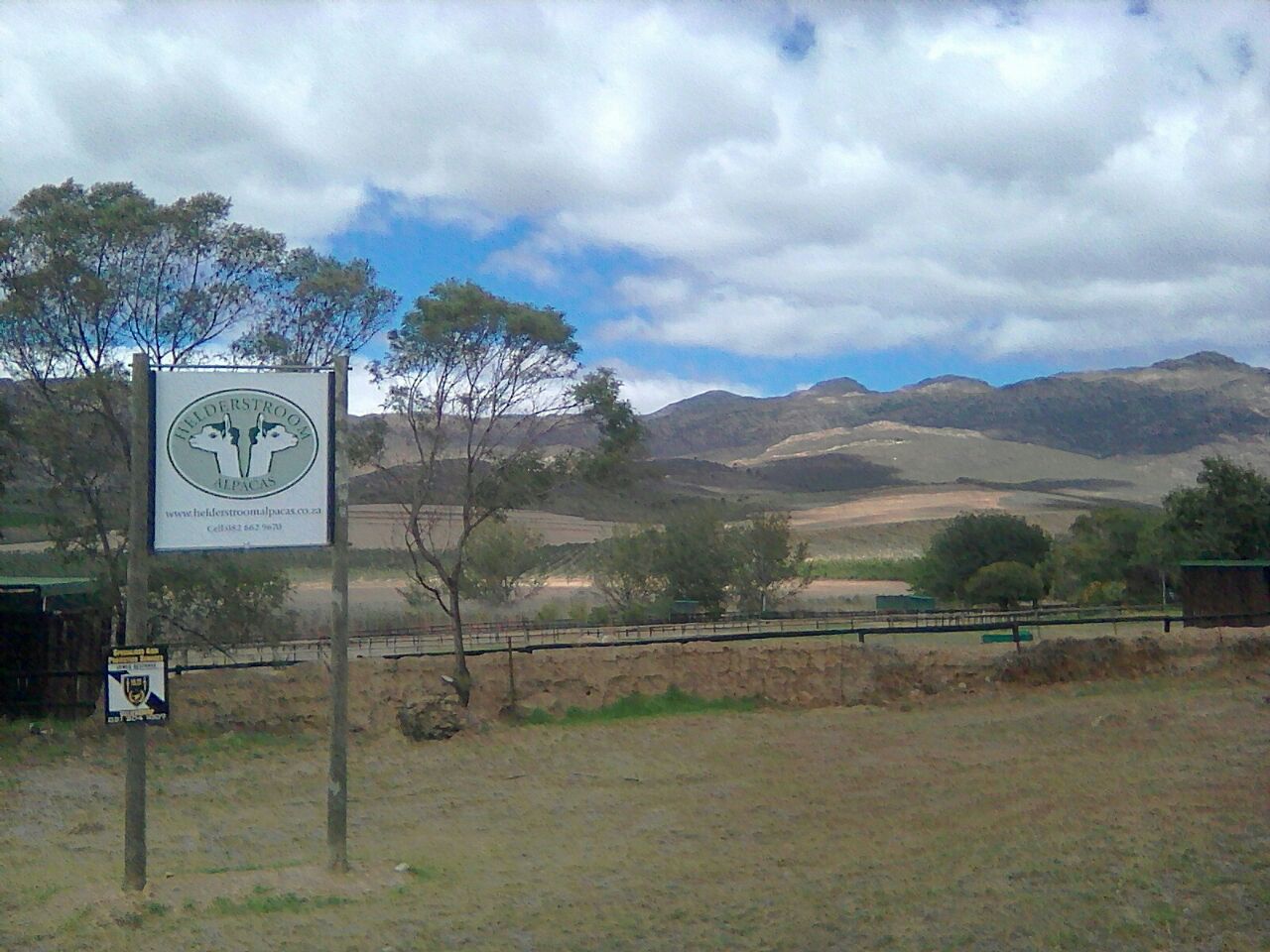 I hadn't, of course, announced I was coming and there was no one at the gate to greet me so I took the rather foolhardy approach of just going in anyway (farms around these parts often have big dogs on them), relying on the fact that most animals seem to like me to deal with any potential canine aggressors. Either that, or I could jump the fence into one of the alpaca fields and then run like hell for the border…

As it turned out, there were dogs, about seven of them, but all pretty friendly aside from barking up a storm as I approached the farmhouse to ask the farmer whether I could go wandering around his property. The farmer himself didn't seem all that disturbed by my presence and promptly volunteered to take me for a tour (I think it was the fact that his dogs took a shining to me that swayed things in my favour).

Finally, I could get up close with the beasts I'd admired so many times from the car. Alpacas, it turns out are very friendly too: 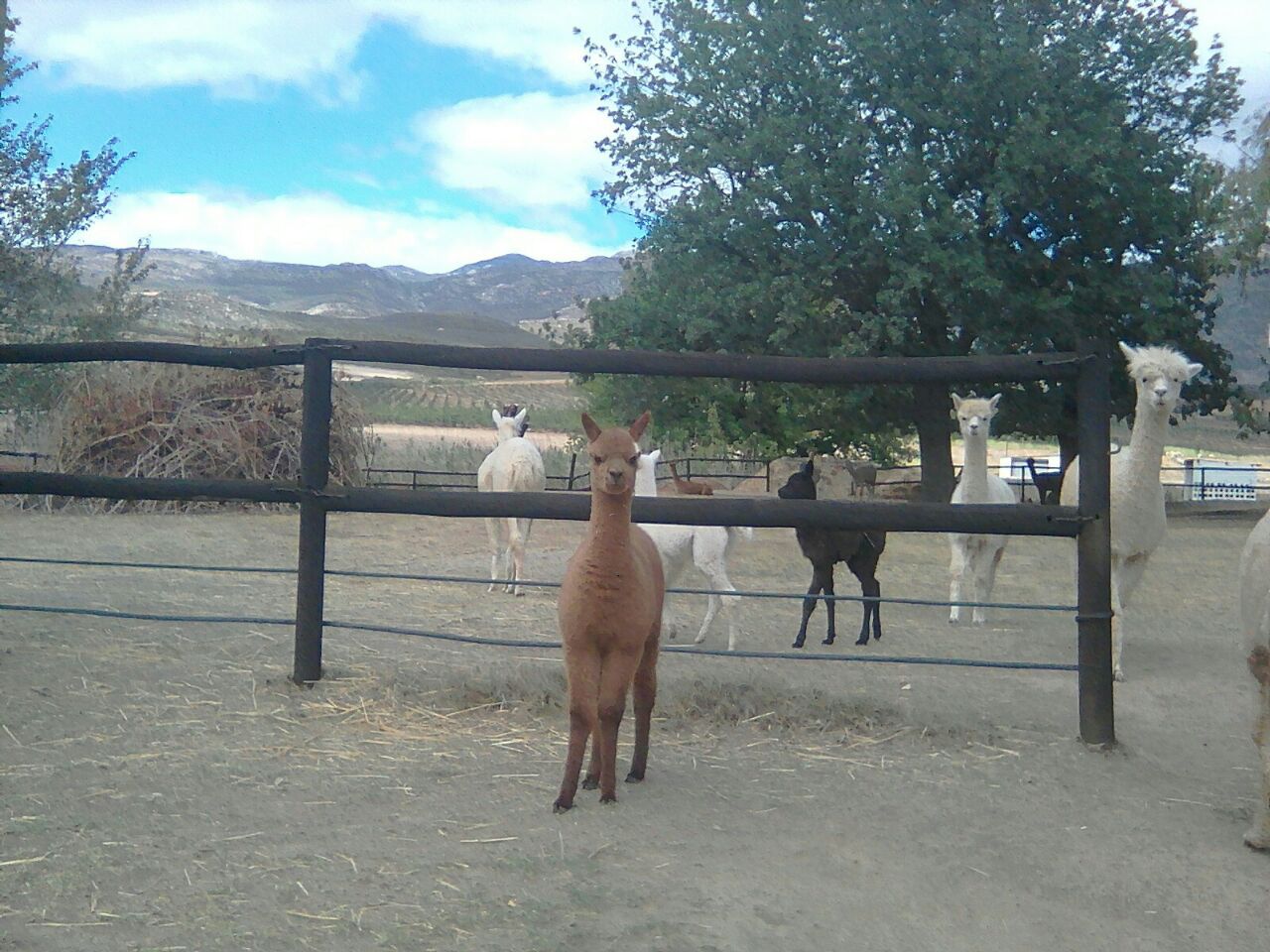 And wear their hair in interesting ways. Just like male models (if you don't get that reference, please stop reading this article and go watch Zoolander immediately. I'm serious. Just go. Do it now): 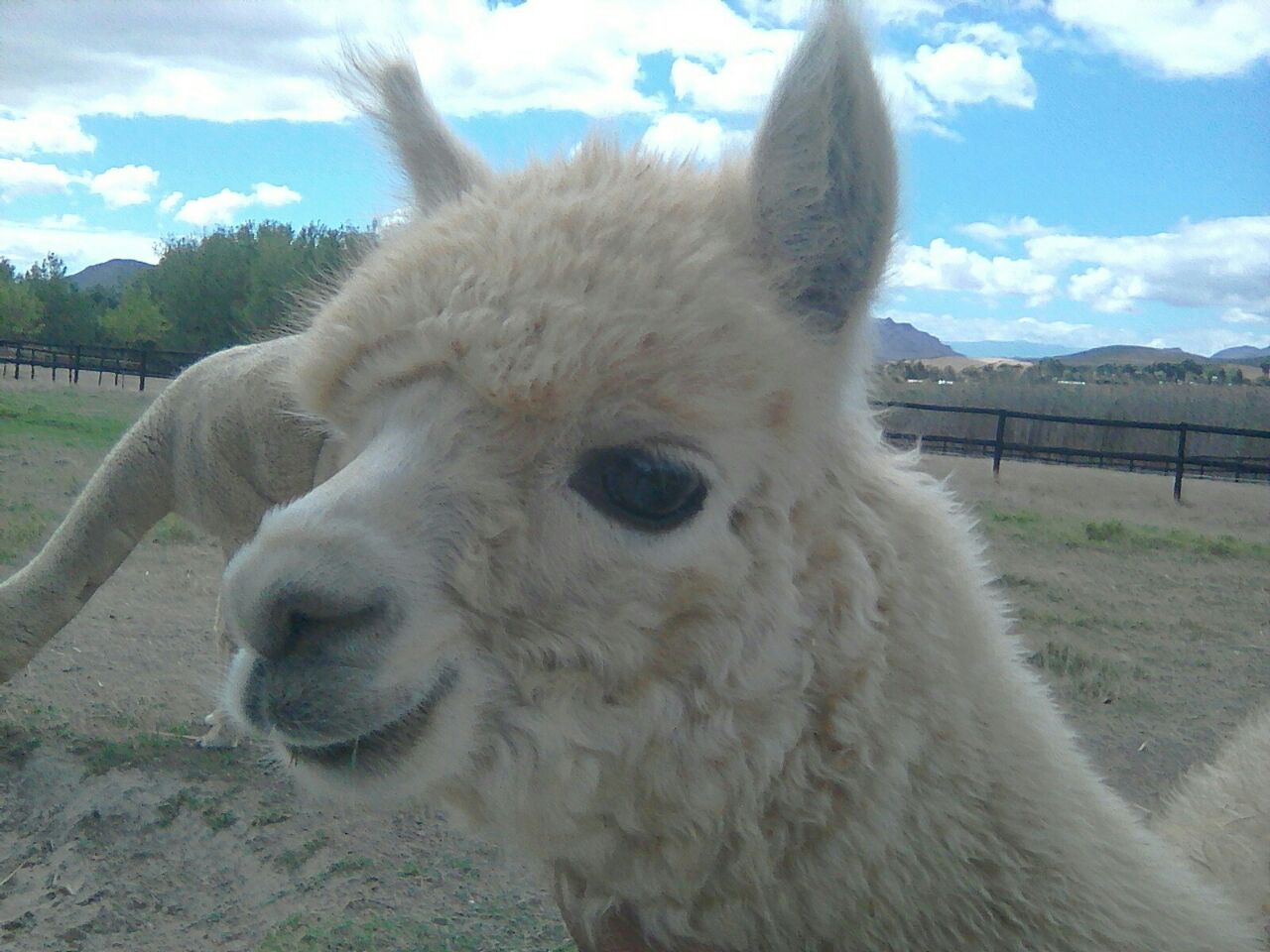 Seriously, is it just me or is this not a coincidence? 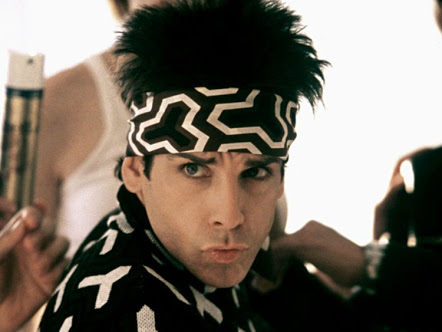 Having wandered around with the alpaca farmer (who turned out to be an ex British military man) for a couple of hours, I'd absorbed quite a bit of random information about alpacas, the boer war, the history of each of the seven dogs and our neighbors. The man clearly adores his animals which makes pretty much anyone alright in my book. I don't remember too much about the history and economics of alpacas (they were taking a keen interest in my hair too during our conversation, which is distracting - maybe because I smelled like a horse): mainly that the grey one was rare and valuable, vicuña products are even more expensive, and oh yes, sometimes the sexually mature males go into a murderous rage that in the worst cases necessitates them being put down…

After topping me up with all that knowledge, he showed me where they spin the fiber: and some of the products made from it. It was certainly a fascinating use of my afternoon, and it never ceases to amaze me how a complete stranger can be so willing to give of their time and expertise for the sake of a random, stray zoologist who just happened upon their farm.

Though this was a bit of ‘travel in my current backyard’ it reminded me what I love so much about long distance travel. Namely that it forces you to get out there and meet new people, experience new things and learn something more about life. That's perhaps my favourite aspect of it. Oh, and that I got to touch both an alpaca and a horse and didn't break out in an itchy rash.

All images are mine except Zoolander which is from: http://www.businessinsider.com/zoolander-where-are-they-now-2016-2?IR=T

walkwithme travel animals humor busy
2년 전 by holothewise49
$1.06
13 votes
댓글 남기기 9
Authors get paid when people like you upvote their post.If you enjoyed what you read here, create your account today and start earning FREE STEEM!
STEEMKR.COM IS SPONSORED BY

Congratulations! This exceptional post has been featured in Episode 15 of The STEEM Engine Express Podcast. Click the link to hear what I had to say, and keep up the good work!

They got it all. Blue steel, magnum, the lot. Lol. Upvoted and as always resteemed mate.

Ferrari. Le Tigre 😂 I'm telling you someone was looking at alpacas when they designed that guys hair...

I burst out laughing with just the first three words!! That's a kind farmer and quite a nice farm. The alpacas are definitely camera-friendly, it's crazy!! I guess alpacas are my new spirit animals <3

Yeah, I've always really liked these. They're so ridiculous. And they make incredibly silly noises 😂

That horse is something else. A true robber in disguise. First he all gentle and he lets you pet him and then he gently tries to steal your notebook and runs away when he failed. lol

Alpacas pictures are awesome. They do seem like friendly animals since they let you get so close to them. It seems like you had a great day my friend. :)

Thank you for sharing it with us all here. Have an amazing day. :)

Yeah, lol he was a rather amusing horse that one. I'm glad I figured out he was up to before he managed to get that notebook - it was a gift from a friend in Galápagos so I would. not have been happy if he'd eaten it!

You have been scouted by @promo-mentors. We are always on the look out for promising authors.

I would like to invite you to our discord group https://discord.gg/vDPAFqb.

When you are there send me a message if you get lost! (My Discord name is the same as the one here)