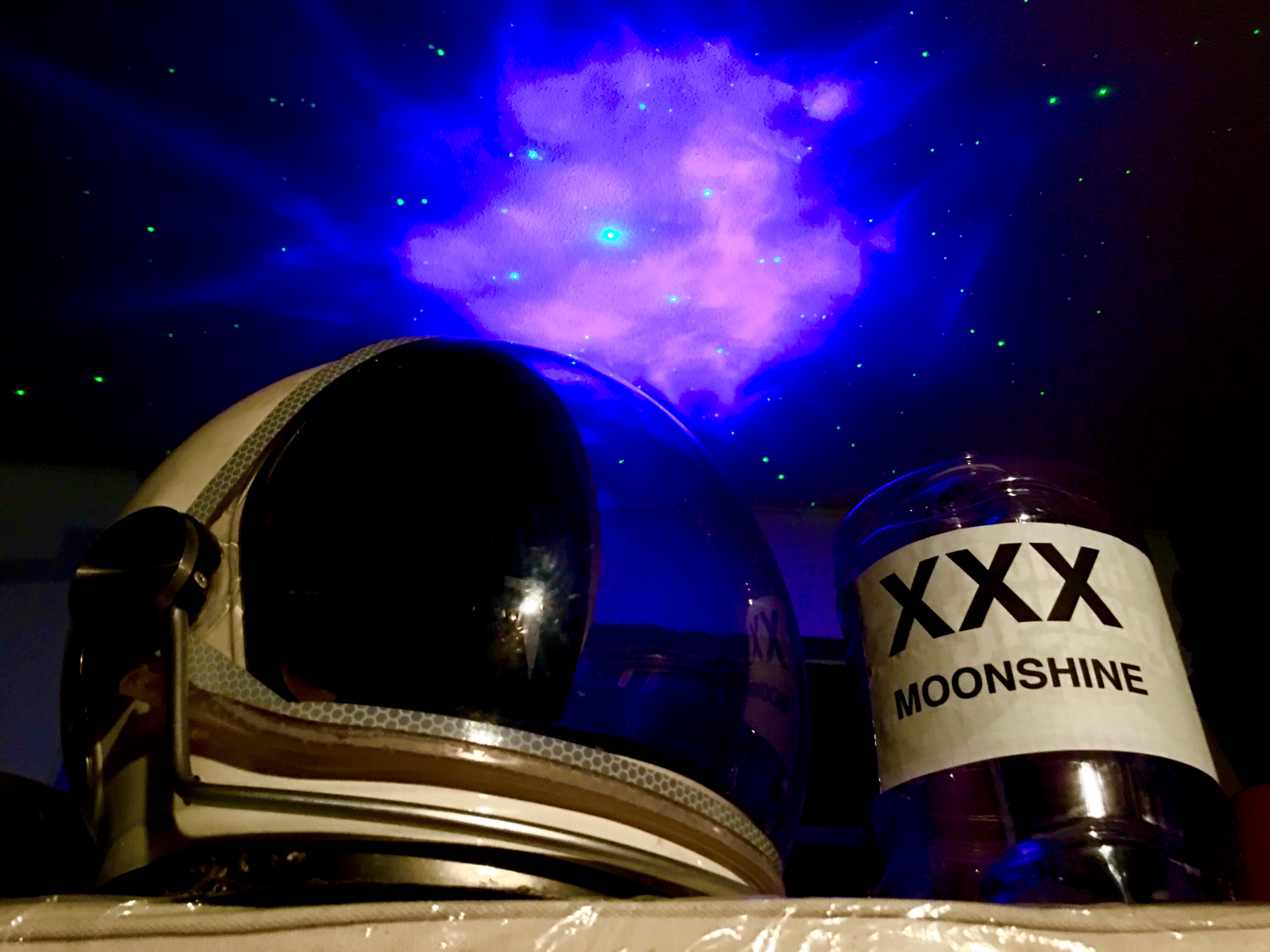 A Serial Saga Of Those Maverick Spacers Known As Rocketbillies And Their Moonshine-Powered Rockets
Author's Note: This space opera is inspired by a dream I had where I was blasting into space on a moonshine powered rocket. Going planet to planet, living free - - as a moonshine powered Rocketbilly. Cause when you're a Rocketbilly, whether you're drinking up or blasting off, you're always powered by that same ole moonshine.
As traders, explorers and prospectors, Rocketbillies exist within a highly decentralized star-spanning economy where the primary consumable - moonshine - can be produced almost anywhere that you can grow fruit or sugarcane to ferment. Where there is life, there is moonshine, as the Rocketbillies say.
I am proud to debut this serial space opera, as it is written, here on our own decentralized frontier - that "space" we call Steemit! I hope you enjoy.
* Bill

So to recap, I woke with my head ringing like a bell. Like a hollow moon struck by an ejected fuel tank. What a feast it had been! Such bawdy and carefree times as we celebrated producing enough moonshine to refuel my out-of-fuel ship and get us back offworld. And enough to set up a Rocketbilly refueling port - the start of a new Rocketbilly city, most likely. But I would always feel that it was my town and would always claim all my local bragging rights.

I dodged ole Samos Kraw and his gang causing me to run out of fuel. But as I assembled my crew of the Galaxy"s best deep core moonshiners with all their cool vehicles and friends, a powerful scene got started. Robo-harvesting local fruits and invigorating the native economy. Them massive aluminium distilling columns. Hundred thousand gallons my ship would need, plus a million gallons more to trade, give away, and burn up drag racin'. We"d done it. I killed a sea monster and became a hero along the way.

Yet once again I cursed the latest expansion of the ban on overcomputing devices. Cause while the Feds reimbursed me 3x what I'd paid for my robot central controller, now we'd had to control the robots manually. Slowed us down and made us curse Empyreal regulations! Not that there is much they could do to us out here, beyond their reach. There was a massive underground market in outlawed tech. I reckon we all had some stashed here or there.

Them Empyreal folk at the jump gate had looted my ship's dash. Took my quantum dash unit and all my autopilot functions with it. Now I had to shake off my hangover and fly this semi-complex beast of a mutirocket nearly by pure feel. I waved at some friends, returned a thumbs up, and ignited the burners. A low hotrod rumble came out of them pipes. Dug craters beneath as I gave gas to them rocket cones and lifted off.

I was flyin high again and figured I would take the massive load of local fruit and crafts to the far side of the nebula. I had to stake a claim and hoped to do it from an Empyreal station near the gate. I fired full afterburners as I blasted past Waigon Station. To hell with Stamos Craw! Let him catch me if he could (not going to happen).

The twins had come with me. Them girls had psychic powers and looked killer in bikinis. They had all kinds of skills, and were actual princesses back on the planet. They didn't need me. But they sure wanted me. I guess the feeling was mutual.

So we jacked up our vitals using zoomtabs. What a paradox how them tabs make days feel like hours yet sharpen your senses like you're zoomed in on the moment! I gotta admit we were hallucinating part of the time. I felt like I was in that scene at the end of that movie 2001.

We was Rocketbillies and that is how we yearned to live. We built our own worlds, had cool vehicles, and traded using our moonshine as both fuel and money. Moonshine that we could make on stills on any planet. It was our love to trade, build, defend, and explore the stars.

The twins and I talked about it all a lot when we weren't having sex, drinking moonshine, or surfing the net.

Then the huge lights and structures of Trexxa jumpgate came into view and grew into a space city around us. We arrived at one of the outlying space docks. Popped the hatch open and smelled salt spray from the three mile wide artificial beach nearby.

The girls had some exploring to do and I was goin to file my crypto-claim and get rich. Upgrade my status from prospector to industrialist! I'd found massive deposits of gold, vanadium, uranium, and tritanium plus all that other amazing stuff.

I would use the profits to build the nebula's biggest marine ecology research base. And a second massive research base to build better rockets. Apply engineering to what we hotroddin moonshine rocketbuilders had learned by trial and error.

And fulfill my dream of building and piloting the world's fastest rocket...

writing scifi fiction rocket moonshine
3년 전 by billsurf55
$0.09
16 votes
댓글 남기기 0
Authors get paid when people like you upvote their post.If you enjoyed what you read here, create your account today and start earning FREE STEEM!
STEEMKR.COM IS SPONSORED BY