Hi everyone, this story is originally written by me. I'm trying to do a series on this particular school, Regal Academy. All names, character and incidences in this story are fictional. No actual resemblance of persons or place is intentional. 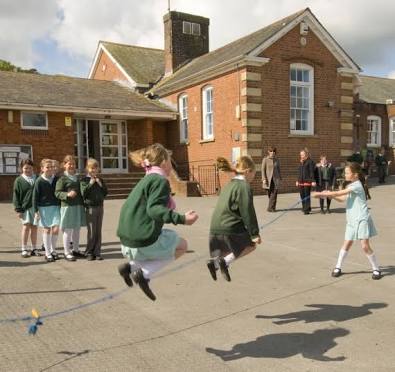 "The Lord's prayer "; commanded senior Iniobong; the chapel prefect even as the students recited in one voice: " our father, who art in heaven, Hallowed be thy name, thy kingdom come.................forever and ever Amen ".
He commanded again: Jss2 girls give us a marching song. One of the girls shouted; " The day is bright, it's bright and fair... " but the others fair girl interrupted band sang "Regal Academy is my school, we are marching on to greatness". This was accepted by everyone as they chorused and marched to their different classes.
Laura marched in her neatly dressed brown and white school uniform along with SS1 students across the lawn to her class. She then settled in her seat. The whole SS1 class was immediately flooded with noise as some students dragged their lockers to the appropriate position which were all scattered after sweeping, and others were involved in a lousy argument concerning one issue or the other.
As an authentic child, Laura quietly sat on seat watching them with one of her hands supporting her Chin and the other laying horizontally in her laps forming an angle of 90°. "Submit your biology assignment"; said Edidiong; the class prefect. This seemed to be the only statement that moved Laura. She immediately unzipped her school bag and brought out a hard cover exercise book, flipped through it's pages to the Page she had carefully drawn and labelled a skeleton which was the assignment, assessed it again and stood up for submission, then quietly went back to her seat. The whole class was again loud with noise as some students hurried to do the assignment at that moved time, others were submitting theirs, and the rest were searching for their notes. "Who carried my Biology?" was the only rampant question in the class.
Laura was still on her seat when it immediately dawned on her to go to the time table board and check what subject was to be taught that time. "Government, first and second period", she muttered as she zoomed off to the staff room to inform and invite the Government teacher to the class." Please teachers may I come in? " she asked on reaching the entrance of the staff room. "Come in"; answered the compound Master who was signing the key time book close to the entry point.
" Good morning Sir, we are having you now " , Laura said spoke to Mr Akpan in her Usual oral accent. "Oh! Thanks a million, I had forgotten", he answered softly. Laura immediately ran back to the class, wiped the black board and went back to her seat. Edidiong; the class prefect asked her " who is coming? " ,but Laura neither answered nor looked at her, rather she pulled out her Government note and her Biro. Laura felt Edidiong never performed her work when she knew what to do, so she just dashed her. "Kpam kpam kpam kpam! Good morning sir" the class chorused as they stood up on the arrival of Mr Akpan, he never replied but quietly moved to the back of the class where Mfonobong; the chubby stubborn girl Sat, she never stood up to greet Mr Akpan, but was busy eating groundnut and banana as early as that time. "Go to the staff room and kneel down and wait for me", Mr Akpan commanded as she hesitatated and sluggishly walked out of the class with the two things still in her hands.The whole class bombarded into laughter." "Mma ikwo", shouted Wisdom; another stubborn student, this received another thunderous laughter from their class.
" Morning class, sit down", the Government teacher commanded as he went straight to the board, drew a line to divide it two parts, wrote the subject and their date, and then turned to the class. "How was your nights?", he asked." Blissful, wonderful, fantastic, calm etc" were their different responses. He then continued, "who can remind us what we learnt in our last class?" There was pin drop silence in the class, it was the only "flap flap" sounds from their books that was heard as they tried to open to where they had their last topic.
As Laura lifted up her right hand to answer the question, a fairly dark complexioned tall guy walked pass the front of their class as he was starring suspiciously at them. He caught everybody's attention as they had never seen such a person in the school compound before. It took almost 5 minutes before they brought back their minds to class including Mr Akpan.
Laura's Hand was still up as she was very interested in the class, so Mr Akpan quickly recognized her to answer the question. Mr Akpan tried to focus his mind on the class but couldn't. The more He tried,the more he got taken away. His memory immediately flashed back.. The Case He won in court 2 weeks ago!!! but the plaintiff vowed to kill and cut him shut when they returned.
Immediately after 10 minutes when to the stranger passed, a loud sound was heard in the whole school: "Bo......o......o...oooo....m".
Mr Akpan struggled to continue his lesson but another cannon boomed in the air: " Boo. ......o.o.o.o.m"."kpa kpa kpa kpa kpa"!!! Sounds from gunshots were heard all over the premises of Regal Academy. This time, every student laid on the floor with heads faced down. The sounds from the gunshots drew nearer and nearer to SS1 class where Mr Akpan was, and by this time, he knew quite well that they were coming for him. The stranger was on a spy mission.
"Look at him there ", shouted the stranger. " pull the trigger, shoot him ,action!!!! ", the gang leader commanded.
On hearing this, Mr Akpan who laid beside Laura (who initially crawled to obtain shield from him) shifted immediately to the corner where the class waste bin was; leaving her.
" Bo....o..o..o.om", the ordered gunshot sounded. The bullet flied mercilessly,made it's way through Laura's head, passed through the leg of Edidiong and the belly of Okubong, and finally made it's way to the wall. Mr Akpan was missed by the bullet as he was sharp enough to leap. The assasins were immediately out of sight as they thought they had killed him.
Unfortunately, Laura and Okubong were killed and Edidiong's left keg was destroyed. Mr Akpan, the principal and the rest of the teachers immediately contacted the parents of the dead, while Edidiong was taken to the hospital, and Mfonobong was kneeling safe in the staff room with her groundnut, she was fortunate.

Thanks for reading. Hope you enjoyed it! Feel free to upvote and resteem..Follow me for more episodes of Black Regal.

writing story blog life fictions
3년 전 by elladean40
$0.03
5 votes
댓글 남기기 4
Authors get paid when people like you upvote their post.If you enjoyed what you read here, create your account today and start earning FREE STEEM!
STEEMKR.COM IS SPONSORED BY

well said
keep it up

your profile is really amazing.

i am a newbie on steemit.

i am looking up to you as a motivator and mentor.

please visit my profile and support me.

i have upvoted and followed you

You have been resteemed as part of #newbieresteemday ... I made today my #newbieresteemday, and invite you and others to do the same. To learn more: Come Join Us!!! (Newbie Resteem Initiative)